This page contains information on VetStarch (6% Hydroxyethyl Starch 130/0.4 in 0.9% Sodium Chloride Injection for veterinary use.
The information provided typically includes the following:

Federal Law (USA) restricts this drug to use by or on the order of a licensed veterinarian.

VetStarch™ (6% hydroxyethyl starch 130/0.4 in 0.9% sodium chloride injection) is indicated for the treatment and prophylaxis of hypovolemia. It is not a substitute for red blood cells or coagulation factors in plasma.

VetStarch is administered by intravenous infusion only. The daily dose and rate of infusion depend on the patient’s blood loss, on the maintenance or restoration of hemodynamics and on the hemodilution (dilution effect). VetStarch can be administered repetitively over several days. [see Warnings and Precautions (5)]

The initial 10 to 20 mL should be infused slowly, keeping the patient under close observation due to possible anaphylactoid reactions. [see General Warnings and Precautions (5.1)]

2.2 Directions for Use of VetStarch

● Check the solution composition, lot number and expiry date, inspect the container for damage or leakage, if damaged do not use. 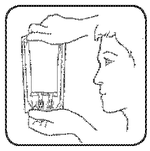 ● Use opening aid to remove overwrap. 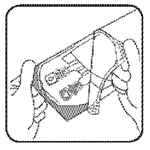 ● Break off the blue tamper evident cover from the infusion port.

● Hang the bag on the infusion stand.
Press drip chamber to get fluid level. Prime infusion set. Connect and adjust the flow rate.

● Close roller clamp. Insert the spike until the clear plastic collar of the port meets the shoulder of the spike.

● Use a non-vented standard infusion set.

1. Do not remove the IV container from its overwrap until immediately before use.

2. Parenteral drug products should be inspected visually for particulate matter and discoloration prior to administration, whenever solution and container permit.

3. Do not administer unless the solution is clear, free from particles and the IV container is undamaged.

4. VetStarch should be used immediately after insertion of the administration set.

6. If administered by pressure infusion, air should be withdrawn or expelled from the bag through the medication/administration port prior to infusion.

7. Discontinue the infusion if an adverse reaction occurs.

8. It is recommended that administration sets be changed at least once every 24 hours.

9. For single use only. Discard unused portion.

The safety and compatibility of additives have not been established.

The use of VetStarch™ is contraindicated in the following conditions:

● Renal failure with oliguria or anuria not related to hypovolemia

Anaphylactoid reactions (bradycardia, tachycardia, bronchospasm, non-cardiac pulmonary edema) have been reported with solutions containing hydroxyethyl starch.3 If a hypersensitivity reaction occurs, administration of the drug should be discontinued immediately and the appropriate treatment and supportive measures should be undertaken until symptoms have resolved. [see Adverse Reactions (6)]

Fluid status and rate of infusion should be assessed regularly during treatment, especially in patients with cardiac insufficiency or severe kidney dysfunction.

In cases of severe dehydration, a crystalloid solution should be given first. Generally, sufficient fluid should be administered in order to avoid dehydration.

Caution should be observed before administering VetStarch to patients with severe liver disease or severe bleeding disorders. With the administration of certain hydroxyethyl starch solutions, disturbances of blood coagulation can occur depending on the dosage.4,5

In humans, elevated serum amylase levels may be observed temporarily following administration of the product and can interfere with the diagnosis of pancreatitis.

At high dosages the dilutional effects may result in decreased levels of coagulation factors and other plasma proteins and a decrease in hematocrit.4,5

Investigations; at high doses, the dilutional effects may result in decreased levels of coagulation factors and other plasma proteins, and a decrease in hematocrit. [see Interference with Laboratory Tests (5.3)]

No interactions with other drugs or nutritional products are known. The safety and compatibility of other additives have not been established.4,5 [see Directions for Use of VetStarch (2.2)]

The type of hydroxyethyl starch present in VetStarch had no teratogenic properties in rats or rabbits. At 5 g/kg of body weight per day, administered as a bolus injection, fetal retardations and embryolethal effects were observed in rats and rabbits, respectively.

In rats, a bolus injection of this dose during pregnancy and lactation reduced body weight of offspring and induced developmental delays. All adverse effects were seen exclusively at maternal toxic doses due to fluid overload. [see Toxicology (12.2.1)]

Fertility studies on directly exposed animals have not been conducted.

Information on the use of VetStarch during labor or delivery is unknown.

VetStarch is mainly excreted by the kidneys, and the risk of adverse reactions to this drug may be greater in patients with impaired renal function. Volume status, infusion rate, and urine output should be closely monitored.

As with all plasma volume substitutes, overdosage can lead to overloading of the circulatory system (e.g., pulmonary edema). In this case, the infusion should be stopped immediately and, if necessary, a diuretic should be administered. [see General Warnings and Precautions (5.1)]

Each 100 mL of the solution contains:

VetStarch is packaged in 250 mL and 500 mL flexible plastic containers made from coextruded polyolefin and is free of PVC, plasticizers, adhesives or latex (Non-DEHP, Latex-free). The container offers an air-closed system and can be used with non-vented IV sets which prevent external air contamination. The container is collapsible and can be used in emergency cases for pressure infusion.

Hydroxyethyl starch is a derivative of thin boiling waxy corn starch, which mainly consists of a glucose polymer (amylopectin) predominately composed of α-1-4-connected glucose units with several α-1-6-branches. Substitution of hydroxyethyl groups on the glucose units of the polymer reduces the normal degradation of amylopectin by α-amylase in the body. The low molar substitution (0.4) is the main pharmacological determinant for the beneficial effects of VetStarch on pharmacokinetics, intravascular volume and hemodilution.6 To describe the molecular weight and molar substitution characteristics of the hydroxyethyl starch in VetStarch, the compound is designated as hydroxyethyl starch 130/0.4.

Long-term studies in animals, to evaluate the carcinogenic potential of VetStarch, have not been performed. No mutagenic effects were observed with hydroxyethyl starch 130/0.4 10% solution in the following tests on mutagenic activity: Salmonella typhimurium reverse mutation assay (in vitro), mammalian cells in the in vitro gene mutation assay, assessment of the clastogenic activity in cultured human peripheral lymphocytes (in vitro), bone marrow cytogenetic test in Sprague-Dawley rats. Fertility studies on directly exposed animals have not been performed.

Three-month repeat infusion toxicology studies were conducted in rats and dogs in which three groups of animals were administered daily intravenous infusion over three hours. Dosing volumes of either 60 or 90 mL/kg body weight of hydroxyethyl starch 130/0.4 (10% solution), or 90 mL/kg 0.9% sodium chloride injection, were studied. Observed toxicity following repeat infusion of hydroxyethyl starch is consistent with the oncotic properties of the solution resulting in hypervolemia in the animals. There were no apparent gender-related effects on toxicity following repeat administration of hydroxyethyl starch 130/0.4 in rats or dogs.

In reproduction studies in rats and rabbits, hydroxyethyl starch 130/0.4 (10% solution) had no teratogenic properties. Embryolethal effects were observed in rabbits at 5 g/kg body weight/day. In rats, bolus injection of this dose during pregnancy and lactation reduced body weight of offspring and induced developmental delays. Signs of fluid overload were seen in the dams. Hydroxyethyl starch 130/0.4 (10% solution) was observed to have no effect in studies assessing skin sensitization, antigenicity, and blood compatibility.

The pharmacodynamic effect of VetStarch™ was examined in a hemorrhagic shock model in conscious rats, and a hemodilution model in dogs. In both studies, the control group received pentastarch (6% hydroxyethyl starch 200/0.5). VetStarch was as effective as pentastarch in maintaining cardiopulmonary function during isovolemic hemodilution in beagle dogs. In the three-hour follow-up period, no additional administration of colloid was necessary.

14. HOW SUPPLIED/STORAGE AND HANDLING

VetStarch™ (6% hydroxyethyl starch 130/0.4 in 0.9% sodium chloride injection) for intravenous infusion is supplied in the following primary container and carton sizes: