This page contains information on Onsior Injection for dogs for veterinary use.
The information provided typically includes the following:

For Subcutaneous Use in Dogs 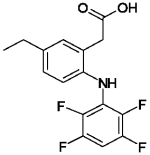 ONSIOR (robenacoxib) injection is indicated for the control of postoperative pain and inflammation associated with soft tissue surgery in dogs ≥ 4 months of age; for up to a maximum of 3 days.

Carefully consider the potential benefits and risks of ONSIOR and other treatment options before deciding to use ONSIOR (robenacoxib) injection. Use the lowest effective dose for the shortest duration consistent with individual response. It is recommended as good aseptic practice to clean stopper surface with isopropyl alcohol before and after each insertion of a needle.

The dose of ONSIOR (robenacoxib) injection is 0.91 mg/lb (2 mg/kg) subcutaneously once daily, for a maximum of 3 days (See Warnings, Precautions and Adverse Reactions).

Dosage Directions: For subcutaneous injection in dogs ≥ 4 months of age; for up to a maximum of 3 days. The first dose should be administered approximately 45 minutes prior to surgery, at the same time as the pre-anesthetic agents are given.

Subsequent doses can be given via subcutaneous injection, or interchanged with the oral tablet in dogs ≥ 5.5 lbs and ≥ 4 months of age, for a maximum of 3 total ONSIOR doses over 3 days, not to exceed one dose per day (see Animal Safety and ONSIOR tablet product insert). If subsequent doses are given by subcutaneous injection, different sites for each injection should be used (See Adverse Reactions).

ONSIOR (robenacoxib) should not be used in dogs that have a hypersensitivity to robenacoxib or known intolerance to NSAIDs.

Not for use in humans. Keep this and all medications out of reach of children. Consult a physician in case of accidental exposure to humans. For subcutaneous use in dogs and cats only. See reverse side of insert for instructions for use in cats.

Do not administer ONSIOR injection or tablets in conjunction with any other oral or injectable NSAID or corticosteroid.

Do not use for more than 3 days. Serious adverse events have been reported, including hepatopathy, with the long term use (28 day study) of ONSIOR tablets in dogs (See Adverse Reactions). Safety not demonstrated for longer than 3 days.

All dogs should undergo a thorough history and physical examination before the initiation of NSAID therapy. Appropriate laboratory tests should be conducted to establish hematological and serum biochemical baseline data prior to administration of an NSAID. Owners should be advised to observe for signs of potential drug toxicity (see Adverse Reactions and Animal Safety).

Monitor dogs post-injection for reactions. Injection site reactions and anaphylactic reactions have been associated with the use of ONSIOR injection (See Adverse Reactions).

Stop administration of ONSIOR if the dog experiences inappetence, vomiting or lethargy.

The safe use of ONSIOR has not been evaluated in dogs younger than 4 months of age, dogs used for breeding, or in pregnant or lactating dogs. Safety has not been demonstrated for intravenous or intramuscular administration of ONSIOR injection.

As a class, cyclo-oxygenase inhibitory NSAIDS may be associated with gastrointestinal, renal, and hepatic toxicity. Sensitivity to drug-associated adverse events varies with the individual patient. Dogs that have experienced adverse reactions from one NSAID may experience adverse reactions from another NSAID. Patients at greatest risk for adverse events are those that are dehydrated, on concomitant diuretic therapy, or those with existing renal, cardiovascular, and/or hepatic dysfunction. Anesthetic drugs may affect renal perfusion; approach concomitant use of anesthetics and NSAIDS cautiously. Appropriate monitoring procedures (including ECG, blood pressure, and temperature regulation) should be employed during all surgical procedures. The use of parenteral fluids during surgery is recommended to decrease potential renal complications when using NSAIDS perioperatively.

If additional pain medication is needed after a daily dose of ONSIOR, a non-NSAID/non- corticosteroid class of analgesic may be necessary. Concurrent administration of potentially nephrotoxic drugs should be carefully approached and monitored. NSAIDs may inhibit prostaglandins which maintain normal homeostatic function. Such anti-prostaglandin effects may result in clinically significant disease in patients with underlying or pre-existing disease that has not been previously diagnosed. NSAIDs possess the potential to produce gastrointestinal ulcerations and/or gastrointestinal perforations. Do not use ONSIOR concomitantly with other anti-inflammatory drugs, such as NSAIDs or corticosteroids. Consider appropriate washout times when switching from one NSAID to another or when switching from corticosteroid use to NSAID use. ONSIOR injection and ONSIOR tablets are safe to use interchangeably when given once a day for a maximum of 3 days in dogs ≥ 4 months of age and ≥ 5.5 lbs.

The use of concomitantly protein-bound drugs with ONSIOR has not been studied in dogs. Commonly used protein-bound drugs include cardiac, anticonvulsant, and behavioral medications. The influence of concomitant drugs that may inhibit metabolism of ONSIOR has not been evaluated. Drug compatibility should be monitored in patients requiring adjunctive therapy. Concurrent medications used during the field study with ONSIOR included parasiticides, anesthetics, pre-anesthetic medications, and antibiotics.

It is unknown whether dogs with a history of hypersensitivity to β lactam drugs will exhibit hypersensitivity to ONSIOR. Robenacoxib is poorly soluble in water and in acid solutions readily degrades to form γ-lactam. In dogs, lactam is a minor metabolite of robenacoxib. Additionally, lactam is a degradation product that increases over the shelf life of the solution. Neurologic signs have been associated with the use of β lactam drugs; it is unknown if the lactam produced by robenacoxib may cause similar neurologic signs.

In a controlled field study (See Effectiveness), a total of 317 male and female dogs representing various breeds were included in the field safety analysis. ONSIOR-treated dogs ranged in age from 6 months to 15 years and weighed between 2.5 and 53.8 kg. The following table shows the number of dogs exhibiting each observation.

* Dogs may have experienced more than one type or occurrence of an event during the study.

**Most often occurred as a single event.

Pain on injection, diarrhea and vomiting were the most commonly reported adverse reactions.

Occurrences of hepatopathy, ataxia, skin lesions/urticaria, and anaphylaxis have been associated with the use of ONSIOR. In a month-long pilot study, 3 dogs that received ONSIOR developed hepatic toxicity. Two of these dogs were euthanized and a third dog recovered after prolonged hospitalization and supportive therapy. In foreign market experience, elevated liver enzymes, hepatic necrosis and death have been associated with the long term use of robenacoxib in dogs. Occurrences of liver failure, hepatitis, and cholangiohepatitis have been reported. In two other field studies, bradycardia, 2nd degree heart block in four dogs, and ventricular arrhythmia in one dog were noted in anesthetized dogs treated with ONSIOR injection.

Injection site reactions (edema, necrosis, and abscesses), and anaphylactic reactions (panting, drooling, shock, pallor, dyspnea, tachypnea, ataxia) have been associated with the use of ONSIOR injection.

For technical assistance or to report suspected adverse drug events, contact Elanco US Inc. at 1-888-545-5973. For additional information about adverse drug experience reporting for animal drugs, contact FDA at 1-888-FDA-VETS or http://www.fda.gov/reportanimalae

ONSIOR, like other drugs of its class, is not free from adverse reactions. Owners should be advised of the potential for adverse reactions and be informed of the clinical signs associated with drug intolerance. Adverse reactions may include vomiting, diarrhea, decreased appetite, dark or tarry stools, increased water consumption, increased urination, anemia, yellowing of gums, skin or whites of the eye due to jaundice, lethargy, incoordination, seizure, or behavioral changes. Serious adverse reactions associated with this drug class can occur without warning and in some cases result in death (see Warnings and Adverse Reactions). Owners should be advised to discontinue ONSIOR therapy and contact their veterinarian immediately if signs of intolerance are observed. The vast majority of patients with drug related adverse reactions have recovered when the signs are recognized, the drug is withdrawn, and veterinary care, if appropriate, is initiated.

Robenacoxib is a non-steroidal anti-inflammatory drug (NSAID) of the coxib class. Repeated subcutaneous administration is not associated with a bioaccumulation of robenacoxib. Although the bioaccumulation of robenacoxib metabolites has not been tested, radiolabeled studies suggest that the various unidentified metabolites are associated with a markedly longer elimination half-life (approximately 22 hours) as compared to that of the parent molecule. The activity of these metabolites has not been evaluated. The pharmacokinetics of robenacoxib injection does not differ between male and female dogs, and is linear over the range of 0.25-4 mg/kg in dogs.

Robenacoxib has a relatively small volume of distribution (Vss of 174 to 336 mL/kg, average = 240 mL/kg), which is consistent with a drug that is extensively bound to plasma proteins. Based upon in vitro canine plasma samples, robenacoxib is approximately 98% bound to plasma proteins when spiked at concentrations ranging from 200 - 2000 ng/mL. The corresponding canine in vitro whole blood-plasma ratio in artificially spiked blood was 0.44.

Robenacoxib is extensively metabolized by the liver in dogs. Apart from one lactam metabolite, the identity of other metabolites is not known in dogs. Robenacoxib is excreted predominately via the biliary route in dogs (approximately 65%); therefore, the majority of the absorbed dose (parent drug and metabolites) is eliminated in the feces. The remainder of the administered dose is eliminated in urine via the kidneys.

the thymus compared to the controls.

Effectiveness was demonstrated using ONSIOR (robenacoxib) injection in a masked, placebo-controlled, multi-site field study in which 317 client-owned dogs presenting for soft tissue surgery were randomized to receive ONSIOR injection or placebo. Drug was administered approximately 45 minutes prior to surgery, along with pre-anesthetic medications, and continued once daily for two additional treatments. Effectiveness was evaluated in 303 dogs and field safety was evaluated in 317 dogs. A statistically significant difference (p-value = 0.0055) was observed in the proportion of treatment successes in the ONSIOR injection treatment group (108/151; 73.7%) compared to the placebo group (85/152; 58.1%). Forty three of 151 dogs in the ONSIOR injection group and 67 of 152 dogs in the placebo group were treatment failures. Statistically significant differences in reductions in Response to Touch scores (p = 0.0013) and Posture/Activity (p = 0.0466) were observed in the ONSIOR injection group relative to the placebo group. The results of the field study demonstrate that subcutaneous administration of ONSIOR (robenacoxib) injection, when administered for a maximum of 3 days, is effective and well-tolerated for the control of postoperative pain associated with soft tissue surgery in dogs.

ONSIOR (robenacoxib) injection is available as a 20 mg/mL solution in a 20 mL multidose vial.

Use within 12 weeks of first puncture.

Manufactured for: Elanco US, Inc. Greenfield, IN 46140

Onsior, Elanco and the diagonal bar logo are trademarks of Elanco or its affiliates.