This page contains information on Naquasone Injectable Solution for veterinary use.
The information provided typically includes the following: 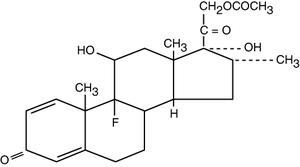 NAQUASONE injectable solution contains trichlormethiazide USP, and dexamethasone acetate USP. It combines the effective diuretic activity of trichlormethiazide with the specific anti-inflammatory activity of dexamethasone for complementary action in the reduction of physiological inflammatory edematous conditions of the equine, and in the reduction of physiological parturient edema of the mammary gland and associated structures of cattle.

ACTION: The mechanism of action by which trichlormethiazide affects diuresis in edematous conditions is by an inhibitory effect on the reabsorption of sodium and chloride in the renal tubules, thereby enhancing excretion of sodium, chloride and water, while apparently having a considerably lessened and more temporary effect on the excretion of potassium and bicarbonate.

The corticoid dexamethasone possesses anti-inflammatory activity. Clinical experience shows that edema is greatly reduced following parenteral treatment with 20 ml of NAQUASONE injectable solution. Effective doses do not cause sodium and fluid retention or potassium loss when used as recommended, but rather enhance the action of the diuretic in NAQUASONE injectable solution by the specific anti-inflammatory effect exerted by corticosteroids.

DOSAGE AND ADMINISTRATION: Equine: 0.5 mI/45 kg (100 lb) of body weight intramuscularly twice the first day, then followed by 0.5 mI/45 kg (100 lb) of body weight once daily for two additional days. The extent and duration of treatment will depend upon the severity of the condition and response to medication. Treatment must be administered for at least two days. Bovine: Prior to, at the time of, or immediately following parturition inject 20 ml (200 mg trichlormethiazide, 10 mg dexamethasone) intramuscularly, and give one bolus (200 mg trichlormethiazide, 5 mg dexamethasone) orally 12 and 36 hours later.

The usual case of edema seen under field conditions will generally begin to respond within 24-48 hours after NAQUASONE injectable solution therapy is initiated. Most cases will subside in three to four (3-4) days. If no results are evident in three (3) days, it is recommended that the animal be re-examined.

CAUTIONS: Trichiormethiazide is a potent, benzothiadiazide diuretic agent required in low milligram doses for saluretic effectiveness and should be used accordingly. Electrolyte depletion effects may be seen with over-vigorous therapy and maximum doses should not be used over an extended period of time. Potassium supplements have not generally been necessary with trichlormethiazide and their administration routinely should not be required. Hypochloremia is unlikely with trichlormethiazide at recommended doses. Animals with severe renal function impairments should be checked for hyperkalemia and acidosis, since therapy with benzothiadiazine diuretics like trichlormethiazide may be contraindicated in these patients.

It must always be kept in mind that dexamethasone is an extremely potent drug with profound physiologic effect. All of the precautions and contraindications for adrenocortical hormones must be followed. Animals receiving the drug should be under close observation.

Administration of corticosteroid-containing products such as NAQUASONE injectable solution may cause premature parturition with subsequent retained placenta. Metritis is also an occasional sequel.

Do not administer to pregnant mares.

Cattle: Treated cattle must not be slaughtered for use in food for at least 21 days after the latest treatment with this drug. Milk taken from treated cattle during treatment and within 48 hours after the latest treatment must not be used as food. Horses: This drug is not to be administered to horses that are to be slaughtered for use in food. Keep out of reach of children.

Trichlormethiazide also exhibits a higher sodium-potassium ratio than either hydrochlorothiazide or chlorothiazide, thus tending to decrease the incidence of hypokalemic manifestations.

Dexamethasone is an effective corticosteroid possessing excellent anti-inflammatory activity. Dexamethasone did not cause sodium or water retention in laboratory studies.

The saluretic action of trichlormethiazide together with the anti-inflammatory activity of dexamethasone provide a complementary effect. Edema is relieved through accelerating water transport from the engorged tissue spaces without serious effects on systemic sodium levels or local electrolyte balance.

The results are summarized in the following table.

Bovine: A study was conducted to determine the optimum dose levels of the two ingredients in NAQUASONE injectable solution (trichlormethiazide (TCM) and dexamethasone (Dex) for production of diuresis when injected into cattle.

All possible combinations of three levels of dexamethasone (5, 10 and 20 mg/450 kg [1000 lb] of body weight) and four levels of trichlormethiazide (50, 100, 200 and 400 mg/450 kg [1000 lb] of body weight) were tested, as well as the bolus form currently marketed. The optimum combination was 20 mg of Dex and 200 mg of TCM per 450 kg (1000 lb) of body weight. The patterns of urine flow were different when comparing the injectable versus the bolus forms. In this model, the level of TCM is more closely related to the amount of urine output than is the level of dexamethasone. At least 200 mg of TCM is required to maximize output, and increasing amounts of dexamethasone slightly increase urine output.

Another study was designed to assess the amount of diuresis produced following treatment with NAQUASONE injectable solution or formulations containing the individual components thereof.

The combination of ingredients in NAQUASONE injectable solution produced more diuresis than formulations of either of the individual components.

Clinical trials were conducted in Canada and France. In the principal Canadian trial, NAQUASONE injectable solution plus Bolus, NAQUASONE injectable solution alone and NAQUASONE Bolus alone were compared. Two hundred and thirty-three (233) completed case reports were received. All treatments were effective in the alleviation of signs of udder edema. A numerically but not significantly more rapid onset of activity was noted when an injection was administered. The clinician will choose the treatment regimen based upon severity of the condition. A number of cows were treated prior to parturition. One evaluator reported that five out of thirty-eight (5/38) calved prematurely. Sequellae were not severe and included one stillbirth, four (4) retained placentas and one (1) metritis. Treatment had no appreciable effect upon milk production.

All the physiological changes that occurred in the treated cows are to be expected with corticosteroid therapy. It appears that in lactating dairy cattle, NAQUASONE injectable solution and NAQUASONE Bolus are safe to use in tandem at three times the recommended dose.