This page contains information on Marquis for veterinary use.
The information provided typically includes the following:

As an aid in reducing the clinical severity of Equine Protozoal Myeloencephalitis (EPM) caused by Sarcocystis neurona in horses; it is expected that approximately two horses out of three will respond favourably to treatment.

Marquis (15% w/w ponazuril) Antiprotozoal Oral Paste for Horses is supplied in ready-to-use syringes containing 127 grams of paste. Each gram of paste contains 150 mg of ponazuril (15% w/w). Marquis is designed to be delivered as an orally administered paste.

Ponazuril is an anticoccidial (antiprotozoal) compound with activity against several genera of the phylum Apicomplexa.

Marquis (ponazuril) is indicated as an aid in reducing the clinical severity of Equine Protozoal Myeloencephalitis (EPM) caused by Sarcocystis neurona in horses; it is expected that approximately two horses out of three will respond favourably to treatment.

The following standardized neurologic scale was used to grade the horses:

Improvement was defined as a decrease of at least one grade.

Naturally-occurring, clinical cases of EPM, characterized by signalment and laboratory diagnosis, were randomly allotted to one of two treatment doses (5 or 10 mg of ponazuril/kg/day for a period of 28 days), then evaluated for clinical changes through 118 days. Acceptance into the study was based on the results from a standardized neurological examination including radiography, serum S. neurona IgG level determination by Western Blot (WB), and a positive cerebrospinal fluid (CSF) for S. neurona IgG level by WB.

Response to treatment was determined by the investigator to be acceptable when a clinical improvement of at least one grade occurred by no later than 3 months after treatment, regardless of whether the CSF by WB was positive or negative.

Not for use in horses intended for food. Keep this product, as well as any drug, out of the reach of children.

CAUTIONS: Prior to treatment, EPM should be distinguished from other diseases that may cause ataxia in horses. Injuries or lameness may also complicate the evaluation of an animal with EPM. In most instances, ataxia due to EPM is asymmetrical and affects the hind limbs.

Clinicians should recognize that clearance of the parasite by ponazuril may not completely resolve the clinical signs attributed to the natural progression of the disease. The prognosis for animals treated for EPM may be dependent upon the severity of disease and the duration of the infection prior to treatment.

The reproductive safety of ponazuril has not been established in equines. Consequently, do not administer this product to breeding mares or stallions.

The administration of this product is restricted to horses in which Equine Protozoal Myeloencephalitis has been confirmed.

In the field study, eight animals were noted to have unusual daily observations. Two horses exhibited blisters on the nose and mouth at some point in the field study, three animals showed a skin rash or hives for up to 18 days, one animal had loose stools throughout the treatment period, one had a mild colic on one day and one animal had a seizure while on medication. The association of these reactions to treatment was not established.

ANIMAL SAFETY SUMMARY: Marquis was administered to 24 adult horses (12 males and 12 females) in a target animal safety study. Three groups of 8 horses each received 0, 10, or 30 mg/kg (water as control, 2X and 6X for 5 mg/kg dose). Horses were dosed after feeding. One half of each group was treated for 28 days and the other half for 56 days followed by necropsy upon termination of treatment. There were several instances of loose feces in all animals in the study irrespective of treatment, sporadic inappetence and one horse at 10 mg/kg (2X) lost weight while on test. Loose feces were treatment related. Histopathological findings included moderate edema in the uterine epithelium of three of the four females in the 6X group (two treated for 28 days and one for 56 days).

DOSAGE: Marquis Antiprotozoal Paste is to be administered orally, at a daily dose of 5 mg of ponazuril per kg of body weight, for a period of 28 consecutive days.

Before administration, the syringe barrel and plunger require assembly. Ensure plunger is clean and dry.

Step 1. End cap must be on syringe barrel when inserting plunger. 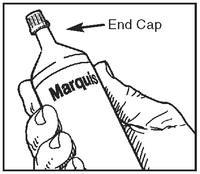 Step 2. Carefully insert a plunger into the base of syringe barrel until it snaps into place, then remove end cap and gently apply pressure to the plunger until paste is seen at the tip of the syringe barrel. 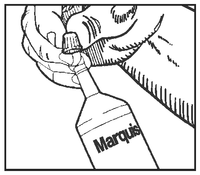 Administering Marquis to the horse:

Note: The paste syringe is a multi-dose package. Ensure that the correct dose is administered with each use.

Step 1. Remove end cap and gently apply pressure to the plunger until paste is seen at the tip of the syringe barrel. Return end cap to tip of paste syringe.

Step 2. Determine weight of horse and ensure the horse’s mouth contains no feed. 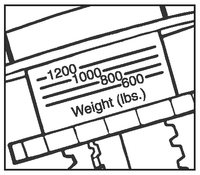 Step 3. To measure dose, dosage ring collar and barrel collar should be flush. Hold plunger and rotate dosage ring with the other hand to the weight of the horse. 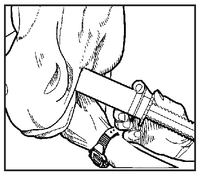 Step 6. To aid swallowing of paste, immediately raise horse’s head for a few seconds after dosing. 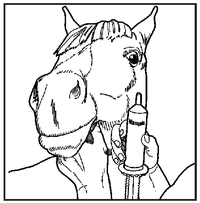 Store at a controlled room temperature of 15-30° C.

6. Benoit, E., Buronfosse, T., Delatour, P.: (1994) Effect of Cytochrome P-450 1A induction on enantioselective metabolism and pharmacokinetics of an aryltrifluoromethyl sulfide in the rat. Chirality 6(5): 372-377.

® Marquis is a registered trademark of Merial