This page contains information on ERADIA Metronidazole Oral Suspension for veterinary use.
The information provided typically includes the following:

For the treatment of Giardia duodenalis infection in dogs.

Oral use. The recommended dose is 25 mg metronidazole per kg body weight (0.2 mL per kg) every 12 hours for 5 days. Weigh the dog prior to drug administration to ensure the correct dose. ERADIA Oral Suspension can be administered to fasted or fed dogs (See pharmacokinetics). 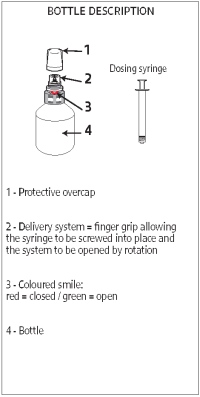 Instructions for use of the Snap cap packaging

A - Shake the bottle vigorously before use.

B - Unscrew the protective overcap. 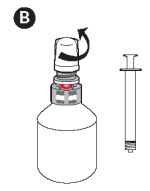 C - Insert the syringe into the upper white part of the cap (finger grip) by pushing firmly, then, while pushing, turn the syringe to the right (clockwise) until the green smile appears. 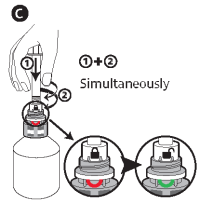 D - Turn the bottle upside down and withdraw the prescribed volume of the product, in the upside-down position.

E - Once the correct volume of the product has been drawn into the syringe, unscrew the syringe from the cap without pushing by turning it to the left (counterclockwise) until the red smile appears again, then continue to turn in order to unfasten the syringe. The system can also be closed by turning the finger grip manually. 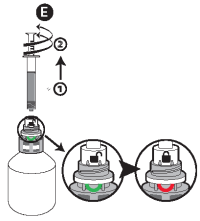 F - Screw the protective overcap back on.

Do not use in dogs with a known hypersensitivity to the drug.

The drug should be used with caution in dogs with hepatic dysfunction.

The safety of the product has not been established in dogs younger than 12 weeks of age or in dogs weighing less than 2 kg.

Studies in laboratory animals have shown inconsistent results with regard to teratogenic/embryotoxic effects of metronidazole. Therefore, use of this product during pregnancy is not recommended. Metronidazole is excreted in milk, and use during lactation is therefore not recommended. Safety has not been established in breeding, pregnant or lactating dogs.

Reinfection occurs frequently. It is recommended that post-treatment cleaning regimens be implemented to reduce the likelihood of reinfection.

Keep out of reach of children. Immediately after use, close the bottle and put the syringe back in the original packaging.

In case of accidental ingestion, seek medical advice immediately and show the package insert or the label to the physician.

Avoid skin contact. In case of skin contact, thoroughly wash the affected area. Special precautions should be taken by the person administering the veterinary medicinal product to the dog: metronidazole has confirmed mutagenic and genotoxic properties in laboratory animals, as well as in humans.

The product can cause skin sensitization.

The following adverse reactions may occur after administration of metronidazole: vomiting, hepatotoxicity, neutropenia and neurologic signs. If neurological signs occur, treatment should be discontinued and the patient should be treated symptomatically.

In the European clinical field trial, safety was evaluated in 91 dogs administered metronidazole. The most common adverse events observed in the dogs treated with the product were digestive tract disorders. These disorders included vomiting and diarrhea, which occurred in 14 dogs (15.4%). Systemic disorders of polyuria, anorexia and lethargy occurred in 3 dogs (3.3%). Abdominal pain and hypersalivation were also observed. The adverse reactions did not result in discontinuation of the treatment.

Interaction with other medicinal products and other forms of interaction: Metronidazole may affect the metabolism of other drugs in the liver, resulting in an increase or a decrease in blood concentrations of metronidazole or the concurrently administered drug.

Pharmacokinetic parameters of metronidazole were evaluated in a crossover study in 6 male and 6 female Beagle dogs receiving a single oral dose of 25 mg/kg metronidazole in the fed or fasted state. The results are summarised in the table below.

In a double-blinded, 1:1 randomized, positive-controlled, multi-site European field study involving 178 client-owned dogs diagnosed with giardiasis, the product showed 97% efficacy in reducing fecal cyst counts (based on arithmetic means in the population of dogs that completed the study without deviation) when metronidazole was administered in a fed or fasted state. Among dogs with diarrhea before treatment, 21/25 dogs (84%) had normal feces after treatment. In 53.8% of the dogs, the palatability of the product was considered highly palatable or palatable.

Carton box containing a 30 ml or 100 ml bottle and a 3 ml graduated syringe. Not all package sizes may be marketed.