This page contains information on Cardalis for veterinary use.
The information provided typically includes the following:

Cardiac drug for oral use in dogs only

Spironolactone, and its active metabolites, act as specific aldosterone antagonists. Spironolactone empirical formula is C24H32O4S and the molecular weight is 416.57. The chemical name is 17-hydroxy-7α-mercapto-3-oxo-17α-pregn-4-ene-21-carboxylic acid γ-lactone acetate and the structural formula is shown below: 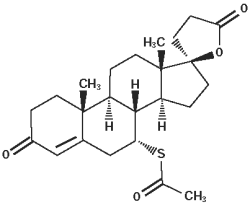 CARDALIS is indicated with concurrent therapy (e.g. furosemide, etc.) for the management of clinical signs of mild, moderate, or severe congestive heart failure in dogs due to atrioventricular valvular insufficiency (AVVI).

CARDALIS administration should begin after pulmonary edema is stabilized. CARDALIS should be administered orally once daily at a dose of 0.9 mg/lb (2 mg/kg) spironolactone and 0.11 mg/lb (0.25 mg/kg) benazepril hydrochloride, according to dog body weight using a suitable combination of whole and/or half tablets. All tablet strengths are scored and the calculated dosage according to dog’s weight should be to the nearest half-tablet increment. CARDALIS should be administered with food.

Keep CARDALIS in a secure location out of reach of dogs, cats, and other animals to prevent accidental ingestion or overdose. In case of accidental overdose, induce vomiting, lavage the stomach (depending on risk assessment), and monitor electrolytes. Symptomatic therapy (e.g. fluid therapy) should be provided as medically necessary. CARDALIS is only for use in dogs with clinical evidence of heart failure.

Human Warnings: Not for use in humans. Keep this and all medications out of reach of children. Consult a physician in case of accidental ingestion by humans.

The safety and effectiveness of concurrent therapy of CARDALIS with pimobendan has not been evaluated.

Dogs undergoing combined treatment with CARDALIS and NSAIDs should be adequately hydrated to avoid renal toxicity.

Concomitant use of desoxycorticosterone pivalate (DOCP) with spironolactone may counter the effect of DOCP as DOCP has an opposing mechanism of action to potassium-sparing diuretics like spironolactone. Closely monitor dogs receiving digoxin and spironolactone. Spironolactone decreases digoxin elimination and hence raises digoxin plasma concentration. This may result in digoxin toxicity.

Spironolactone and benazepril hydrochloride undergo extensive hepatic biotransformation. Care should be taken when using CARDALIS in dogs with hepatic dysfunction.

A U.S. clinical field study comprised of a 360-day treatment period evaluated the safety and effectiveness of CARDALIS compared to benazepril hydrochloride in 569 client-owned dogs with left-sided AVVI. Table 1 summarizes the adverse reactions not directly related to the progression of disease that occurred in greater than 5% of the dogs treated with CARDALIS.

Renal insufficiency was reported more frequently in dogs treated with CARDALIS. This finding may be also attributed to the concurrent administration of furosemide. The clinical pathology parameters associated with renal function were not statistically different between the treatment groups.

The incidence of death, including euthanasia and sudden death, was similar in dogs treated with CARDALIS or benazepril hydrochloride. In most cases, death was attributable to the progression of heart disease or the clinical signs associated with congestive heart failure. Deaths of unknown cause were presumed to be cardiac in nature.

Serum magnesium and potassium values were significantly higher in the CARDALIS group, although the mean values remained within the reference range and did not change significantly over time. These electrolyte changes are consistent with the potassium-sparing properties of spironolactone. One dog treated with CARDALIS was removed from the study at Day 7 because it developed hyperkalemia.

Contact Information: To report suspected adverse events or to request a copy of the Safety Data Sheet (SDS), please call Ceva Animal Health at 1-800-999-0297. For additional information about adverse drug experience reporting for animal drugs, contact FDA at 1-888-FDA-VETS or online at www.fda.gov/reportanimalae.

Mechanism of Action: The main pharmacological target of spironolactone and benazepril is the renin-angiotensin-aldosterone system (RAAS) at different levels in the cascade. Spironolactone and its active metabolites (including 7-α-thiomethyl-spironolactone and canrenone) act as specific antagonists of aldosterone (regardless of the source) by binding competitively to mineralocorticoid receptors located in the kidneys, heart and blood vessels.

Benazepril hydrochloride is a prodrug hydrolyzed in vivo into its active metabolite, benazeprilat. Benazeprilat is a highly potent and selective inhibitor of angiotensin-converting enzyme (ACE), thus preventing the conversion of inactive angiotensin I to active angiotensin II. This prevents deleterious effects of vasoconstriction and aldosterone release, including sodium and water retention, and vascular and myocardial remodeling. However, aldosterone release is not fully controlled by ACE inhibitors because angiotensin II is also produced by non-ACE pathways. Therefore, concomitant use of the aldosterone antagonist spironolactone and the ACE inhibitor benazepril hydrochloride inhibits both ACE and non-ACE pathways.

After multiple oral doses of 20 mg of spironolactone in association with 2.5 mg of benazepril in dogs (n=18, 9 male and 9 female) for 10 consecutive days (steady state), no accumulation was observed.

Benazepril hydrochloride is a prodrug which, after absorption from the gastrointestinal tract, is rapidly converted by nonspecific carboxyl esterases, mainly in the liver, into its active metabolite benazeprilat. Benazeprilat is itself poorly absorbed from the gastrointestinal tract and the overall bioavailability of benazeprilat after oral administration is estimated to be less than 7%.

After multiple oral doses of 2.5 mg of benazepril in association with 20 mg of spironolactone in dogs (n=18, 9 male and 9 female) for 10 consecutive days (steady state), no accumulation was observed. In dogs, benazeprilat is excreted approximately equally by both renal (45%) and hepatic (55%) routes.

Dogs ranged from 3 to 19 years of age and 5 to 155 lbs (2.3 to 70.5 kg) at enrollment. The most common breeds were mixed breed, Cavalier King Charles Spaniel, Chihuahua, Shih Tzu, Maltese, Dachshund, and Yorkshire Terrier. Enrolled dogs demonstrated radiographic evidence of congestive heart failure prior to enrollment or on Day 0 and exhibited clinical signs associated with left-sided AVVI, including exercise intolerance and/or dyspnea, echocardiographic evidence of left-atrial enlargement, moderate-to-severe mitral regurgitation, and presence of a left-sided cardiac murmur. Dogs with acquired heart disease other than left-sided AVVI, congenital heart defect, current positive heartworm antigen test, or syncope not related to heart disease, and dogs intended for breeding or known to be pregnant or lactating, were excluded.

A total of 569 dogs were treated with either CARDALIS (284 dogs) at a dose of 2 mg/kg spironolactone and 0.25 mg/kg benazepril hydrochloride once daily or benazepril hydrochloride alone (285 dogs) at a dose of 0.25 mg/kg once daily. Doses were administered with food or within 30 minutes of feeding. All dogs received concurrent administration of oral furosemide throughout the study (up to 8 mg/kg/day), to manage pulmonary edema. Digoxin and calcium channel blockers were allowed for control of supraventricular arrhythmias. The use of injectable furosemide was permitted during the study evaluation period only if used in place of an equivalent oral dose.

The rate of treatment failure was the primary effectiveness variable used to compare CARDALIS to benazepril hydrochloride alone. Treatment failure was defined as cardiac death or euthanasia (including death of unknown cause), recurrence or worsening of pulmonary edema, newly documented cardiogenic ascites, or clinical signs of congestive heart failure requiring administration of a furosemide dosage higher than 8 mg/kg/day. Failure rates at study Days 30, 90, 180, and 270 were also evaluated as secondary outcomes.

The rate of failure in the CARDALIS group estimated from the model analysis was statistically different (P = 0.0433) and numerically lower than that of the benazepril hydrochloride alone group, as summarized in Table 4.

Palatability: During the field study, 233 dogs were offered CARDALIS once daily for 14 days. CARDALIS was accepted voluntarily, with or without food, in 87.6% of the 3178 reported doses.

Animal Safety: In a laboratory at safety study, 32 healthy one-year old Beagle dogs (16 males and 16 females) were randomly assigned to an untreated control group or were dosed orally with CARDALIS once daily for 26 weeks at 0, 1X, 3X, and 5X the maximum recommended daily dose (4 mg/kg spironolactone and 0.5 mg/kg benazepril hydrochloride). No dogs were removed and no unscheduled deaths occurred during the study. The dogs dosed with CARDALIS showed no test article-related effects on food or water consumption, body weights, electrocardiographic findings, or blood pressure. The dogs in the 5X group had lower mean heart rates compared to the other groups at the end of the study.

Increased mean serum potassium levels were found in dogs in all CARDALIS dose groups but remained within reference range. There was a dose-related decrease in red cell mass (mean red blood cell count, hemocrit and hemoglobin) but all variables remained within reference ranges. There were decreases in mean prostate weights in the 3X and 5X groups and signs of slight to marked atrophy of prostate glandular tissue. There was a thickening of the zona glomerulosa of adrenal glands in both male and female in the 3X and 5X treated animals.

CARDALIS chewable tablets for dogs are available in 3 sizes of oblong half scored flavored tablets:

CARDALIS™ trademark is the property of Ceva Santé Animale S.A.