For Intra-Articular (I.A.) Use in Horses 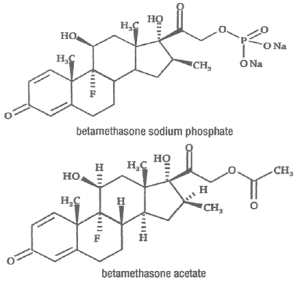 Betamethasone sodium phosphate is a white to practically white, odorless powder, and is hygroscopic. It is freely soluble in water and in methanol, but is practically insoluble in acetone and in chloroform.

Betamethasone acetate is a white to creamy white, odorless powder that sinters and resolidifies at about 165°C, and remelts at about 200°C-220°C with decomposition. It is practically insoluble in water, but freely soluble in acetone, and is soluble in alcohol and in chloroform.

BETAVET is indicated for the control of pain and inflammation associated with osteoarthritis in horses.

Shake well immediately before use.

Using strict aseptic technique, administer 1.5 mL BETAVET (9 mg total betamethasone) per joint by intra-articular injection. BETAVET may be administered concurrently in up to 2 joints per horse.

Use immediately after opening, then discard any remaining contents.

BETAVET is contraindicated in horses with hypersensitivity to betamethasone.

Intra-articular injection of corticosteroids for local effect is contraindicated in the presence of septic arthritis.

Do not use in horses intended for human consumption.

Clinical and experimental data have demonstrated that corticosteroids administered orally or parenterally to animals may induce the first stage of parturition when administered during the last trimester of pregnancy and may precipitate premature parturition followed by dystocia, fetal death, retained placenta, and metritis.

Additionally, corticosteroids administered to dogs, rabbits and rodents during pregnancy have resulted in cleft palate in offspring. Corticosteroids administered to dogs during pregnancy have also resulted in other congenital anomalies including deformed forelegs, phocomelia and anasarca. Therefore, before use of corticosteroids in pregnant animals, the possible benefits to the pregnant animal should be weighed against potential hazards to its developing embryo or fetus.

Human Warnings: Not for use in humans. For use in animals only. Keep this and all medications out of the reach of children. Consult a physician in the case of accidental human exposure.

Corticosteroids, including BETAVET, administered intra-articularly are systemically absorbed. Do not use in horses with acute infections.

Acute moderate to severe exacerbation of pain, further loss of joint motion, fever, or malaise within several days following intra-articular injection may indicate a septic process. Because of the anti-inflammatory action of corticosteroids, signs of infection in the treated joint may be masked. Appropriate examination of joint fluid is necessary to exclude a septic process. If a bacterial infection is present, appropriate antibacterial therapy should be instituted immediately. Additional doses of corticosteroids should not be administered until joint sepsis has been definitively ruled out.

Due to the potential for exacerbation of clinical signs of laminitis, glucocorticoids should be used with caution in horses with a history of laminitis, or horses otherwise at a higher risk for laminitis.

Concurrent use of other anti-inflammatory drugs, such as NSAIDs or other corticosteroids, should be approached with caution. Due to the potential for systemic exposure, concomitant use of NSAIDs and corticosteroids may increase the risk of gastrointestinal, renal, and other toxicity. Consider appropriate wash out times prior to administering additional NSAIDs or corticosteroids.

Adverse reactions reported during a field study of 239 horses of various breeds which had been administered either BETAVET (n=119) or a saline control (n=120) are summarized in Table 1. One BETAVET treated horse was removed from the study for onset of acute non-weight bearing lameness on Day 4. Treatment for presumed joint sepsis was instituted immediately, but the horse was eventually euthanized several weeks later due to a thromboembolic event associated with prolonged intravenous catheter placement. One BETAVET treated horse developed bilateral forelimb lameness on Day 8, with snow packed in the shoes and poor hoof conformation noted by the investigator. The horse was diagnosed with laminitis. Radiographs showed no abnormalities, and the horse was sound shortly after shoeing changes were implemented.

Betamethasone is a potent glucocorticoid steroid with anti-inflammatory and immunosuppressive properties. Depending upon their physico-chemical properties, drugs administered intra-articularly may enter the general circulation because the synovial joint cavity is in direct equilibrium with the surrounding blood supply. After the intra-articular administration of 9 mg BETAVET in horses, there were quantifiable concentrations of betamethasone (above 1.0 ng/mL) in the plasma. Maximum plasma concentrations (Cmax) and time to Cmax (Tmax) values ranged from 2.70 to 3.88 ng/mL and 4.5 to 8 hours, respectively. The effective plasma terminal elimination half-life ranged from 4 to 8 hours. The non-compartmental area-under-the curve to the limit of quantification (AUCLOQ) ranged from 29.24 to 42.96 hr*ng/mL. In contrast, most of the betamethasone disodium phosphate concentrations and all of the betamethasone acetate concentrations were below the limit of quantification in plasma.

A negative control, randomized, masked field study provided data to evaluate the effectiveness of BETAVET administered at 1.5 mL (9 mg betamethasone) once intra-articularly for the control of pain and inflammation associated with osteoarthritis in horses. A total of 119 horses received BETAVET and 120 horses received saline. 229 horses were included in the final effectiveness analysis. Clinical success was defined as improvement in one lameness grade according to the AAEP lameness scoring system on Day 5 following treatment. Table 2 summarizes the clinical success and failure in each treatment group on Day 5. The success rate for horses in the BETAVET group was statistically significantly different (p=0.0061) than that in the saline group, with success rates of 75.73% and 52.52%, respectively (back-transformed from the logistic regression).

Absolute neutrophils were statistically significantly higher in the BETAVET treated groups as compared to the control group. Trends toward a decrease in lymphocytes and eosinophils, and an increase in monocytes were identified in the BETAVET treated groups after the initial dose of BETAVET. Individual animal values for white blood cells generally remained within the reference range. BETAVET treated horses also had a trend toward increased blood glucose after the initial dose. Some individual animals showed mild increases in blood glucose above the reference range.

STORAGE CONDITIONS: Store at 20° to 25°C (68° to 77°F) (See USP Controlled Room Temperature). Protect from light. Use carton to protect contents from light until used.

Packaged in boxes of 1