This page contains information on Baytril 100 for veterinary use.
The information provided typically includes the following:

For Subcutaneous Use Only

Baytril 100 is indicated for the treatment of bovine respiratory disease (BRD) associated with Mannheimia haemolytica and Pasteurella multocida in beef and non-lactating dairy cattle.

Baytril 100 is indicated for the treatment of swine respiratory disease (SRD) associated with Actinobacillus pleuropneumoniae, Pasteurella multocida, and Haemophilus parasuis.

Each milliliter of Baytril 100 injectable solution contains 100 mg of enrofloxacin. Excipients are L-arginine base 200 mg, n-butyl alcohol 30 mg, benzyl alcohol (as a preservative) 20 mg, and water for injection, q.s.

Enrofloxacin is active in vitro against gram-negative and gram-positive bacteria. In vitro activity against Mycoplasma spp. has also been detected.

The Minimum Inhibitory Concentrations (MIC’s) of enrofloxacin were determined for isolates obtained from natural infections in cattle and swine (See Table 1).


* The clinical significance of these in vitro data has not been demonstrated.

Interpretive criteria (zone diameters and MIC breakpoints) have been established as an in vitro aid to estimate in vivo efficacy of Baytril 100 against cattle pathogens (Clinical and Laboratory Standards Institute [CLSI] M31-A3, 2008) and swine pathogens (Provisional: CLSI-January 2009) listed on the label. The interpretive criteria are listed below:

*disk diffusion interpretive criteria have not been established. It is recommended that S. suis isolates be tested by MIC

Susceptible or “S” implies an infection due to the isolate may be appropriately treated with the dosage regimen of Baytril 100 recommended for that type of infection and infecting species.

Intermediate or “I” implies an infection due to the isolate may be appropriately treated in body sites where Baytril 100 is physiologically concentrated or when a high dosage of a drug can be used: also indicates a “buffer zone” that should prevent small, uncontrolled, technical factors from causing major discrepancies in interpretation.

Resistant or “R” isolates are not inhibited by the usually achievable concentrations of Baytril 100 with normal dosage schedules and clinical efficacy has not been reliable in treatment studies.

PHARMACOKINETICS: Pharmacokinetic studies were conducted in healthy beef calves and swine. A HPLC assay was used to determine the concentrations of enrofloxacin. Baytril 100 is rapidly and completely absorbed following subcutaneous administration. Plasma concentrations increase proportionally with dose indicating linear pharmacokinetics. Enrofloxacin is primarily metabolized by the liver. It is de-ethylated to the main metabolite ciprofloxacin whose antimicrobial activity is additive with enrofloxacin. Also, glucoronidation occurs facilitating biliary secretion. In the gastrointestinal tract, parent compounds may be hydrolyzed from glucoronide metabolites and reabsorbed. About 60% and 40% of an enrofloxacin dose is excreted via feces and urine, respectively in cattle and 70% and 30% respectively in swine.

Plasma pharmacokinetic parameters estimated after single subcutaneous injections of Baytril 100 are given in Table 2. 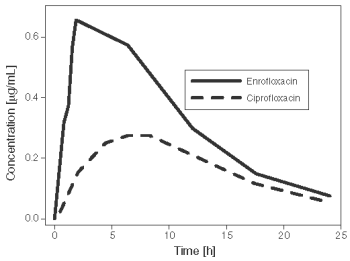 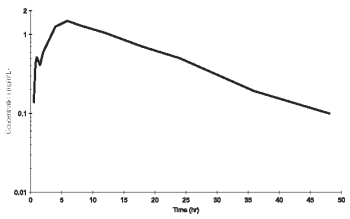 The calculated volume of distribution at steady state (Vss) of 1.46 L/kg (cattle) and 2.83 L/kg (swine) after a single intravenous injection of 7.5 mg/kg indicates extensive tissue penetration. This is confirmed by the finding that concentrations in lung tissues of cattle are about 2 times higher than corresponding plasma levels (Table 3).

EFFICACY: Cattle: A total of 845 feedlot calves with naturally-occurring bovine respiratory disease (BRD) were treated with Baytril 100 in eight field trials located in five cattle-feeding states of the U.S.A. Response to treatment was compared to non-treated controls. Single-dose and multiple-day therapy regimens were evaluated. BRD and mortality were significantly reduced in enrofloxacin-treated calves. No systemic adverse reactions were reported in treated animals.

Swine: A total of 590 pigs were treated with Baytril 100 or saline in two separate natural infection SRD field trials. For the treatment of SRD, the success rate of enrofloxacin-treated pigs that were defined as “sick and febrile” (increased respiratory rate, laboured or dyspneic breathing, depressed attitude and a rectal temperature ≥ 40 °C) was statistically significantly greater than the success rate of saline-treated “sick and febrile” pigs.

TOXICOLOGY: The oral LD50 for laboratory rats was greater than 5000 mg/kg of body weight. Ninety-day feeding studies in dogs and rats revealed no observable effects at treatment rates of 3 and 40 mg/kg respectively. Chronic studies in rats and mice revealed no observable adverse effects at 5.3 mg/kg and 323 mg/kg respectively. There was no evidence of carcinogenic effect in laboratory animal models. A two-generation rat reproduction study revealed no effect with 9.9 mg/kg treatments. No teratogenic effects were observed in rabbits at doses of 25 mg/kg or in rats at 50 mg/kg.

A safety study was conducted in 23 day-old calves using doses of 5, 15 and 25 mg/kg for 15 consecutive days. No clinical signs of toxicity or changes in clinical pathology parameters were observed. No articular cartilage lesions were observed in the stifle joints at any dose level at 2 days and 9 days following 15 days of drug administration.

An injection site study conducted in feeder calves demonstrated that the formulation may induce reaction in the subcutaneous tissue and underlying muscle. No painful responses to administration were observed.

Swine: A safety study was conducted in 32 pigs weighing approximately 57 kg using single doses of 5, 15, or 25 mg/kg daily for 15 consecutive days. Lameness was observed in all groups, including the saline-treated controls. Musculoskeletal stiffness was observed following the 15 and 25 mg/kg treatments with clinical signs appearing during the second week of treatment. Administration of 15 mg/kg and 25 mg/kg, SC once daily for 15 days was shown to have an adverse effect on joints and articular cartilage in rapidly growing swine. Lameness and histological cartilage abnormalities (clustering of chondrocytes) were reported more frequently in the intermediate and high dose groups and these signs are consistent with fluoroquinolone-induced arthropathy.

A second study was conducted in two pigs weighing approximately 23 kg, treated with 50 mg/kg for 5 consecutive days. There were no clinical signs of toxicity or pathological changes.

An injection site study conducted in pigs demonstrated that the formulation may induce a transient reaction in the subcutaneous tissue. No painful responses to administration were observed.

The safety of enrofloxacin in breeding, pregnant and lactating cattle or swine has not been established. The long-term effects on articular joint cartilage have not been determined in pigs above market weight. Subcutaneous injection can cause local tissue reaction that may result in trim loss at slaughter. Administered dose volume should not exceed 10 mL per injection site in cattle and 2.5 mL per injection site in swine. Safety has not been determined in pigs less than 4 weeks of age.

Quinolone-class drugs have been shown to produce erosions of cartilage of weight-bearing joints and other signs of arthropathy in immature animals of various species.

Transitory swelling and inflammation at the injection site has been reported in post marketing reports.

Cattle: Baytril 100 injectable solution provides flexible dosages and durations of therapy in cattle. Baytril 100 may be administered as a single dose for one day or for multiple days of therapy. Selection of the appropriate dose and duration of therapy should be based on an assessment of the severity of disease, pathogen susceptibility and clinical response. Do not exceed 10 mL per injection site.

Multiple-Dose Therapy: Administer daily (every 24 hours) for 3 days, a subcutaneous dose of 2.5 - 5.0 mg/kg of body weight (2.5 - 5.0 mL/100 kg). For animals that are clinically improved but still exhibit some signs of disease, additional treatments may be given on days four and five.

Swine: Administer once, behind the ear, a subcutaneous dose of 7.5 mg/kg of body weight (0.75 mL/10 kg). Use appropriate needle length and injection technique to avoid inadvertent intramuscular injection. Do not exceed 2.5 mL per injection site.

Table 4a - Baytril 100 Dose and Treatment Schedule for Cattle

Note: Subcutaneous injection can cause a local tissue reaction that may result in trim loss of edible tissue at slaughter.

Treated animals must not be slaughtered for use in food for at least 36 days for cattle and 8 days for swine after the latest treatment with this drug. Do not use in female dairy cattle 20 months of age or older. Do not use in veal calves. The withdrawal period has not been established in preruminating calves.

● Baytril 100 should not be used as a mass medication for cattle and swine.

● Baytril 100 should only be used for treating individual cases of bovine and swine respiratory disease after first choice treatment has failed.

● The choice of Baytril 100 as the most appropriate treatment should be confirmed by clinical experience supported, where possible, by pathogen culture and drug susceptibility testing.

● Do not use in an extra-label manner in cattle, swine or any other species.

Do not store below 4° C or above 30° C. Protect from direct sunlight.