This page contains information on Amiglyde-V for veterinary use.
The information provided typically includes the following: 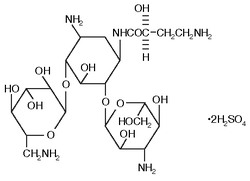 The dosage form supplied is a sterile, colorless to light straw-colored solution. The solution contains, in addition to amikacin sulfate, 2.5% sodium citrate, USP with pH adjusted to 4.5 with sulfuric acid and 0.66% sodium bisulfite added. The multi-dose 12 gram-48 mL vial contains 0.01% benzethonium chloride, USP as a preservative.

The effectiveness of AMIGLYDE-V (amikacin sulfate) in infections caused by Escherichia coli, Pseudomonas sp and Klebsiella sp has been demonstrated clinically in the horse. In addition, the following microorganisms have been shown to be susceptible to amikacin in vitro1, although the clinical significance of this action has not been demonstrated in animals:

Staphylococcus aureus (both penicillin-resistant and penicillin-sensitive)

The aminoglycoside antibiotics in general have limited activity against gram-positive pathogens, although Staphylococcus aureus and Listeria monocytogenes are susceptible to amikacin as noted above.

Amikacin has been shown to be effective against many aminoglycoside-resistant strains due to its ability to resist degradation by aminoglycoside inactivating enzymes known to affect gentamicin, tobramycin and kanamycin2.

AMIGLYDE-V is indicated for the treatment of uterine infections (endometritis, metritis and pyometra) in mares, when caused by susceptible organisms including Escherichia coli, Pseudomonas sp and Klebsiella sp. The use of AMIGLYDE-V in eliminating infections caused by the above organisms has been shown clinically to improve fertility in infected mares.

While nearly all strains of Escherichia coli, Pseudomonas sp and Klebsiella sp, including those that are resistant to gentamicin, kanamycin or other aminoglycosides, are susceptible to amikacin at levels achieved following treatment, it is recommended that the invading organism be cultured and its susceptibility demonstrated as a guide to therapy. Amikacin susceptibility discs, 30 mcg, should be used for determining in vitro susceptibility.

For treatment of uterine infections in mares, 2 grams (8 mL) of AMIGLYDE-V, mixed with 200 mL 0.9% Sodium chloride injection, USP and aseptically infused into the uterus daily for three consecutive days, has been found to be the most efficacious dosage.

There are no known contraindications for the use of AMIGLYDE-V in horses other than a history of hypersensitivity to amikacin.

Although AMIGLYDE-V is not absorbed to an appreciable extent following intrauterine infusion, concurrent use of other aminoglycosides should be avoided because of the potential for additive effects.

In vitro studies have demonstrated that when sperm are exposed to the preservative which is present in the 48 mL vials (250 mg/mL) sperm viability is impaired.

This drug is not to be administered to horses that are to be slaughtered for use in food.

No adverse reactions or other side effects have been reported.

AMIGLYDE-V is non-irritating to equine endometrial tissue when infused into the uterus as directed (see DOSAGE AND ADMINISTRATION). In laboratory animals as well as equine studies, the drug was generally found not to be irritating when injected intravenously, subcutaneously or intramuscularly.

Although amikacin, like other aminoglycosides, is potentially nephrotoxic, ototoxic and neurotoxic, parenteral (intravenous) administration of AMIGLYDE-V (amikacin sulfate) twice daily at dosages of up to 22 mg/kg for 15 consecutive days in horses resulted in no clinical, laboratory or histopathologic evidence of toxicity.

Studies in vitro have shown that amikacin is not spermicidal when added to stallion or bull semen extender at concentrations as high as 1,000 mcg/mL. In reproductive studies, all mares artificially inseminated with extended semen containing AMIGLYDE-V at a concentration of 100 mcg/mL became pregnant. Intrauterine infusion of 2 grams of AMIGLYDE-V 8 hours prior to breeding by natural service did not impair fertility in mares. Therefore, mares should not be bred for at least 8 hours following uterine infusion.

AMIGLYDE-V (amikacin sulfate) Veterinary Solution is supplied as a colorless solution which is stable at room temperature. At times the solution may become pale yellow in color. This does not indicate a decrease in potency.

Zoetis is a trademark and Amiglyde-V is a registered trademark of Zoetis or its licensors, used under license by Zoetis Canada Inc.