Commonly reported side effects of terbinafine include: headache. Other side effects include: diarrhea, dyspepsia, and skin rash. See below for a comprehensive list of adverse effects.

Along with its needed effects, terbinafine may cause some unwanted effects. Although not all of these side effects may occur, if they do occur they may need medical attention.

Check with your doctor immediately if any of the following side effects occur while taking terbinafine:

Some side effects of terbinafine may occur that usually do not need medical attention. These side effects may go away during treatment as your body adjusts to the medicine. Also, your health care professional may be able to tell you about ways to prevent or reduce some of these side effects.

In general, side effects have been mild to moderate and transient; however, this drug has been associated with serious life-threatening events such as hepatic failure, anaphylaxis, and severe neutropenia. Unless otherwise specified, the listed side effects were reported with the tablets.[Ref]

Taste disturbances were typically noticed 5 to 8 weeks after starting therapy and returned to normal within several weeks after stopping the medication. The taste alteration has been rarely accompanied by a discoloration of the tongue and/or a disturbance in the sense of smell.

Hypogeusia (including ageusia) usually recovered within several weeks after this drug was stopped. Isolated cases of prolonged hypogeusia have been reported.

Taste disturbance (including taste loss), paresthesia, hypoesthesia, tinnitus, and vertigo have also been reported during postmarketing experience. Some cases of taste disturbance were severe enough to cause decreased food intake, weight loss, anxiety, and depressive symptoms.[Ref]

Vomiting, upper abdominal pain, and toothache have been reported with the oral granules. Vomiting has also been reported during postmarketing experience with the tablets.[Ref]

An 81-year-old male who had been treated with topical antifungal agents for tinea pedis started this drug (125 mg orally daily) as the lesions did not respond to topical therapy. He was not taking any other medications and had no history of skin disease. No other skin lesions were observed at that time. Two weeks later, he developed erythematous and pustular lesions on his fingers and toes, and an erythematous macular eruption on the limbs. This drug was discontinued, but the eruptions continued to worsen. Histopathology of a punch biopsy from his toe showed intraepidermal sterile pustules containing neutrophils, so-called Kogoj's spongiform pustules. He was then diagnosed with having acrodermatitis continua of Hallopeau and was treated with corticosteroids therapy.

An 80-year-old female experienced DRESS secondary to severe sialadenitis coincident with this drug. The patient was admitted with a generalized pruriginous eruption. She presented with erythematous and edematous widespread confluent plaques, with a scaly annular border. She had initiated therapy 14 days before onset of the generalized rash, for a nonspecific squamous plaque of the trunk. DRESS induced by this drug was diagnosed and therapy was discontinued. Topical therapy was started with 0.5% clobetasol propionate cream applied to the whole body. The rash progressively improved and blood eosinophilia decreased.

A 68-year-old male experienced acute generalized exanthematous pustulosis coincident with this drug. He presented with a symmetrical maculopapular eruption on both lower anterior legs. Within 2 days, the rash generalized with facial involvement. He developed the rash 20 days after initiating oral therapy for onychomycosis. After withdrawal of this drug, the exanthema abated within 10 days under topical therapy with corticosteroids.

Arthralgia and myalgia have also been reported during postmarketing experience.[Ref]

Liver enzyme abnormalities (at least 2 times the upper limit of normal) have been reported in 3.3% of patients.

In most liver failure cases, patients had serious underlying systemic conditions; causal association with this drug was unclear.

A 57-year-old male with chronic hepatitis B virus (HBV) infection developed drug-induced acute autoimmune hepatitis coincident with this drug. He was given 250 mg once daily over a 12-week period for dermatophyte toenail onychomycosis. He developed the side effect just prior to completing the course of therapy. He was not taking any other drugs or herbal supplements, did not drink alcohol, and did not appear to suffer a flare of HBV infection. Liver function studies began to normalize 6 weeks after this drug was discontinued.

Cases of liver failure (some leading to death or liver transplant), hepatitis, cholestasis, and increased hepatic enzymes have also been reported during postmarketing experience.[Ref]

Malaise and fatigue have also been reported during postmarketing experience.

Changes in the ocular lens and retina have been reported; however, the clinical significance is unknown.

Dyschromatopsia, whereby the patient reported a greenish hue in her vision, and photopsia have occurred in a patient after 3 weeks of therapy. This problem resolved within 1 week of discontinuing the drug.[Ref]

Agranulocytosis, thrombocytopenia, anemia, and pancytopenia have also been reported during postmarketing experience.[Ref]

2. Jones TC, Villars VV "Special features of the clinical use of oral terbinafine in the treatment of fungal diseases." Br J Dermatol 126(suppl (1992): 61-9

9. Balfour JA, Faulds D "Terbinafine. A review of its pharmacodynamic and pharmacokinetic properties, and therapeutic potential in superficial mycoses [published erratum appears in Drugs 1992 May;43(5):699]." Drugs 43 (1992): 259-84 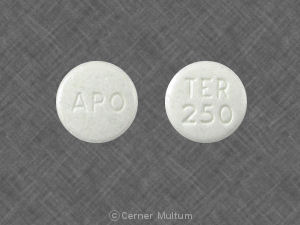