Note: This document contains side effect information about efavirenz. Some of the dosage forms listed on this page may not apply to the brand name Sustiva.

Common side effects of Sustiva include: diarrhea, nausea, and skin rash. Other side effects include: dizziness, lack of concentration, fatigue, headache, vomiting, and anorexia. See below for a comprehensive list of adverse effects.

Along with its needed effects, efavirenz (the active ingredient contained in Sustiva) may cause some unwanted effects. Although not all of these side effects may occur, if they do occur they may need medical attention.

Check with your doctor immediately if any of the following side effects occur while taking efavirenz:

Some side effects of efavirenz may occur that usually do not need medical attention. These side effects may go away during treatment as your body adjusts to the medicine. Also, your health care professional may be able to tell you about ways to prevent or reduce some of these side effects.

The most significant side effects included nervous system symptoms, psychiatric symptoms, and rash. The most common side effects (at least moderate severity) were impaired concentration, abnormal dreams, rash, dizziness, nausea, headache, fatigue, insomnia, and vomiting in patients using this drug in combination with lamivudine-zidovudine or indinavir.

Administration of this drug with food may increase drug exposure and may increase the rate of side effects (especially nervous system symptoms).[Ref]

Increased nonfasting triglycerides (at least 751 mg/dL) and glucose (greater than 250 mg/dL) have been reported in up to 11% and up to 5% of patients, respectively.[Ref]

Nervous system symptoms generally began the first or second day of therapy and often resolved after 2 to 4 weeks. Nervous system symptoms of any grade and regardless of causality (52.7%) included dizziness, insomnia, impaired concentration, somnolence, abnormal dreams, hallucinations, amnesia, agitation, euphoria, depersonalization, confusion, abnormal thinking, and stupor during clinical trials with this drug in combination with other antiretroviral agents. These symptoms were mild in 33.3%, moderate in 17.4%, and severe in 2% of patients. Therapy was discontinued in 2.1% of patients due to these side effects.

Side effects of moderate or severe intensity included dizziness (up to 9%), headache (up to 8%), impaired concentration (up to 5%), and somnolence (up to 2%).

Vacuolar axonopathy and hypersomnolence leading to coma and death was reported in a patient with elevated drug levels.[Ref]

Very common (10% or more): Dizziness (included lightheadedness/fainting; up to 28.1%)

Rashes were usually mild-to-moderate maculopapular skin eruptions. The median time to onset of rash in adults was 11 days. In most patients, the rash resolved within 1 month despite continued use of the drug. Treatment was discontinued in 1.7% of patients due to rash.

There was limited experience using this drug in patients who previously discontinued other nonnucleoside reverse transcriptase inhibitors due to rash. In 19 such patients formerly on nevirapine, about half developed a mild to moderate rash; 2 of those patients discontinued therapy because of the rash.[Ref]

Psychiatric symptoms generally began the first or second day of therapy and often resolved after 2 to 4 weeks. Patients with history of psychiatric disorders were at greater risk of serious psychiatric side effects. Psychiatric side effects classified as serious during controlled trials included severe depression, suicidal ideation, nonfatal suicide attempts, aggressive behavior, paranoid reactions, and manic reactions. One percent of patients discontinued or interrupted therapy due to at least 1 of these side effects.

Elevated amylase (greater than 2 times the upper limit of normal [ULN]) has been reported in up to 6% of patients.

A 42-year-old HIV-positive woman's saquinavir in her highly active antiretroviral therapy was replaced with this drug to increase compliance. Two weeks after initiation, the patient reported severe and constant burning in her tongue, gums, and oral mucosa and was diagnosed with burning mouth syndrome (BMS). Efavirenz (the active ingredient contained in Sustiva) was discontinued and the BMS resolved within a week.[Ref]

False-positive urine cannabinoid test results have been observed with some screening assays in uninfected and HIV-infected subjects using this drug.[Ref]

Postmarketing reports: Hepatic failure (a few reports were characterized by a fulminant course, with some cases progressing to transplantation or death), hepatic enzyme increase, hepatitis[Ref]

Increased ALT, AST, and GGT to greater than 5 times ULN have each been reported in up to 8% of patients. Isolated elevations of GGT may have reflected enzyme induction not associated with liver toxicity.

During clinical trials, elevations in ALT and AST to greater than 5 times ULN occurred in 20% and 13%, respectively, of patients seropositive for hepatitis B and/or C. Therapy was discontinued in 3% of coinfected patients due to liver or biliary system disorders.

Some of the postmarketing reports of hepatic failure occurred in patients with no preexisting liver disease or other identifiable risk factors.[Ref]

Analysis of a 3 mm stone, eliminated by a 47-year-old HIV-1-infected male patient, showed a stone consisting of 60% efavirenz (the active ingredient contained in Sustiva) metabolites.[Ref]

23. HHS Panel on Antiretroviral Guidelines for Adults and Adolescents. Office of AIDS Research Advisory Council (OARAC). NIH. National Institutes of Health "Guidelines for the use of antiretroviral agents in HIV-1-infected adults and adolescents. http://aidsinfo.nih.gov/contentfiles/lvguidelines/adultandadolescentgl.pdf." (2014):

42. HHS Panel on Antiretroviral Therapy and Medical Management of HIV-Infected Children. National Institutes of Health "Guidelines for the use of antiretroviral agents in pediatric HIV infection. http://aidsinfo.nih.gov/contentfiles/lvguidelines/pediatricguidelines.pdf." (2014): 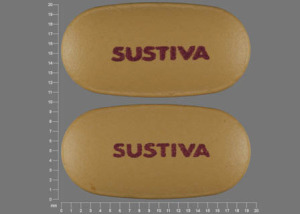