Efavirenz is also contained as an ingredient in the following combinations:
Efavirenz, Emtricitabine, and Tenofovir Disoproxil Fumarate

Medically reviewed by Drugs.com on May 5, 2022. Written by ASHP.

Usually avoid efavirenz in pregnant women during first trimester; avoid in women of childbearing age who may become pregnant. (See Fetal/Neonatal Morbidity and Mortality under Cautions.)

Efavirenz/emtricitabine/tenofovir DF fixed combination (Atripla) can be used in adults, adolescents, and children ≥12 years of age weighing ≥40 kg to decrease pill burden and improve adherence; used alone as a complete treatment regimen or used in conjunction with other antiretrovirals.

Management of occupational exposures to HIV is complex and evolving; consult infectious disease specialist, clinician with expertise in administration of antiretroviral agents, and/or National Clinicians’ Postexposure Prophylaxis Hotline (PEPline at 888-448-4911) whenever possible. Do not delay initiation of PEP while waiting for expert consultation.

Postexposure prophylaxis of HIV infection following nonoccupational exposure† [off-label] (nPEP) in individuals exposed to blood, genital secretions, or other potentially infectious body fluids that might contain HIV when the exposure represents a substantial risk for HIV transmission. Used in conjunction with other antiretrovirals.

CDC states efavirenz is an alternative antiretroviral that can be used in nPEP regimens, but use in such regimens only with expert consultation.

Consult infectious disease specialist, clinician with expertise in administration of antiretroviral agents, and/or the National Clinicians’ Postexposure Prophylaxis Hotline (PEPline at 888-448-4911) if nPEP indicated in certain exposed individuals (e.g., pregnant women, children, those with medical conditions such as renal impairment) or if considering a regimen not included in CDC guidelines, source virus is known or likely to be resistant to antiretrovirals, or healthcare provider is inexperienced in prescribing antiretrovirals. Do not delay initiation of nPEP while waiting for expert consultation.

Efavirenz (Sustiva): Use in conjunction with other antiretrovirals.

Do not use single-entity efavirenz (Sustiva) and efavirenz/emtricitabine/tenofovir DF (Atripla) concomitantly, unless needed for adjustment of efavirenz dosage (e.g., when fixed combination used concomitantly with rifampin).

For adults and pediatric patients ≥3 months of age not able to swallow capsules or tablets, administer capsule contents by mixing with small amount (1–2 teaspoonfuls) of soft food (capsule sprinkle method). Consider mixing with infant formula only if infant cannot consume solid foods. Administer efavirenz mixture within 30 minutes after preparation; do not consume any additional food or infant formula for 2 hours after the mixture.

Swallow tablets whole on an empty stomach; do not break or crush.

Efavirenz (Sustiva): 600 mg once daily. Use in conjunction with 2 NRTIs (see Postexposure Prophylaxis following Occupational Exposure to HIV under Uses).

Initiate PEP as soon as possible following occupational exposure to HIV (preferably within hours); continue for 4 weeks, if tolerated.

Efavirenz/emtricitabine/tenofovir DF (Atripla): Use usual dosage in patients with Clcr ≥50 mL/minute; do not use in those with Clcr <50 mL/minute.

If serious psychiatric adverse events occur, evaluate to determine if symptoms are related to efavirenz; if so, determine whether risks of continued efavirenz outweigh benefits.

Seizures reported, generally in those with a history of seizures. Use with caution in patients with history of seizures. Monitor anticonvulsant plasma concentrations if used in patients receiving anticonvulsants that are metabolized principally by the liver (e.g., phenytoin, phenobarbital). (See Specific Drugs and Laboratory Tests under Interactions.)

May cause fetal harm if administered during first trimester of pregnancy. Teratogenicity demonstrated in animals. Birth defects (including neural tube defects) reported in humans, usually with first-trimester exposure. (See Pregnancy under Cautions.)

Advise women of childbearing potential about the teratogenic potential of efavirenz; perform test to rule out pregnancy before initiating efavirenz or fixed combination containing efavirenz.

Avoid pregnancy during therapy and for 12 weeks after discontinuance of efavirenz or fixed combination containing efavirenz. Women of childbearing potential should use a reliable method of barrier contraception in addition to or instead of a hormonal contraceptive (oral or other hormonal contraceptive). (See Specific Drugs and Laboratory Tests under Interactions.)

Median time to rash onset 11 days in adults and 28 days in pediatric patients; median duration 16 days. Mild to moderate rash generally resolves within 1 month with continued efavirenz. May be reinitiated after temporary interruption for rash. Antihistamines and/or corticosteroids may improve tolerability and hasten resolution of rash.

Hepatic failure and hepatitis reported, some with a fulminant course requiring transplantation or resulting in death. Hepatic failure has occurred in some patients with no preexisting hepatic disease or other identifiable risk factors.

Use with caution in patients with hepatic impairment. (See Hepatic Impairment under Cautions.)

Assess serum liver enzyme concentrations prior to and during efavirenz treatment in patients with underlying hepatic disease (including those with HBV and/or HCV infection), patients with markedly increased serum transaminase concentrations, and patients receiving other drugs associated with liver toxicity.

Do not use efavirenz/emtricitabine/tenofovir DF concomitantly with single-entity efavirenz, unless needed for adjustment of efavirenz dosage (e.g., when fixed combination used concomitantly with rifampin). (See Specific Drugs and Laboratory Tests under Interactions.)

Because the antiretrovirals contained in efavirenz/emtricitabine/tenofovir DF also are available in single-entity or other fixed-combination preparations, take care to ensure that therapy is not duplicated if the fixed combination is used in conjunction with other antiretrovirals.

Autoimmune disorders (e.g., Graves' disease, polymyositis, Guillain-Barré syndrome) also reported in the setting of immune reconstitution; time to onset is more variable and can occur many months after initiation of antiretroviral therapy.

Efavirenz may cause fetal harm if administered during first trimester of pregnancy. There are retrospective case reports of neural tube defects in infants born to mothers with first trimester exposure to efavirenz, but prospective pregnancy data not sufficient to adequately assess this risk.

Data from the Antiretroviral Pregnancy Registry show no difference in the risk of overall birth defects for efavirenz compared with background rate for birth defects.

Women of childbearing potential should use effective contraceptive measures during therapy and for 12 weeks after discontinuance of efavirenz or efavirenz/emtricitabine/tenofovir DF. (See Fetal/Neonatal Morbidity and Mortality under Cautions.)

Manufacturer states avoid use during first trimester of pregnancy.

Experts also state that antiretroviral regimens that do not include efavirenz should be strongly considered in women who are planning to become pregnant or are sexually active and not using effective contraception, provided such regimens are acceptable to the provider and not expected to compromise the health of the woman.

If a pregnant woman already receiving an efavirenz-containing regimen presents for antenatal care during first trimester, some experts suggest the regimen can be continued if well tolerated and providing adequate virologic suppression. This strategy recognizes that risk of neural tube defects is limited to first 5–6 weeks of pregnancy and pregnancy rarely recognized until after 4–6 weeks and that unnecessary changes in antiretroviral regimens during pregnancy may be associated with loss of virologic control and increased risk of perinatal HIV transmission.

If efavirenz or a fixed combination containing efavirenz is used during first trimester or if pregnancy occurs, apprise patient of potential harm to the fetus.

Instruct HIV-infected women not to breast-feed because of risk of HIV transmission and risk of adverse effects in the infant.

Not recommended in sexually active adolescent females of childbearing potential who desire to become pregnant or when reliable contraception cannot be ensured. (See Pregnancy under Cautions.)

Insufficient experience in those ≥65 years of age to determine whether they respond differently than younger adults.

Efavirenz/emtricitabine/tenofovir DF (Atripla): Do not use in those with Clcr <50 mL/minute.

Metabolized by CYP3A and CYP2B6.

Pharmacokinetic interactions likely with drugs that are inhibitors, inducers, or substrates of CYP isoenzymes 3A, 2B6, 2C9, or 2C19 with possible alteration in metabolism of efavirenz and/or other drug.

Compared with administration in the fasting state, AUC increased 28% when a single 600-mg efavirenz dose as tablets was administered with a high-fat, high-calorie meal (1000 kcal, 500–600 kcal from fat). 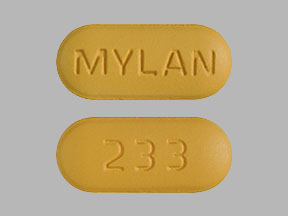