Medically reviewed by Philip Thornton, DipPharm. Last updated on May 18, 2022.

Test all patients for evidence of current or prior hepatitis B virus (HBV) infection before initiating treatment with ledipasvir / sofosbuvir. HBV reactivation has been reported in HCV/HBV coinfected patients who were undergoing or had completed treatment with HCV direct acting antivirals and were not receiving HBV antiviral therapy. Some cases have resulted in fulminant hepatitis, hepatic failure, and death. Monitor HCV/HBV coinfected patients for hepatitis flare or HBV reactivation during HCV treatment and post-treatment follow-up. Initiate appropriate patient management for HBV infection as clinically indicated.

Along with its needed effects, ledipasvir / sofosbuvir may cause some unwanted effects. Although not all of these side effects may occur, if they do occur they may need medical attention.

Check with your doctor immediately if any of the following side effects occur while taking ledipasvir / sofosbuvir:

Some side effects of ledipasvir / sofosbuvir may occur that usually do not need medical attention. These side effects may go away during treatment as your body adjusts to the medicine. Also, your health care professional may be able to tell you about ways to prevent or reduce some of these side effects.

Among 174 liver transplant recipients with compensated liver disease using this drug with ribavirin for 12 weeks, 1% permanently discontinued this drug due to a side effect.

Among 162 patients with decompensated liver disease (pretransplant or posttransplant) using this drug with ribavirin for 12 weeks, 4% died, 2% had a liver transplantation, and less than 1% had a liver transplantation and died during therapy or within 30 days after stopping therapy. Due to the advanced liver disease in these patients (who had increased risk of disease progression leading to liver failure and death), the contribution of drug effect to outcomes could not be reliably assessed. This drug was permanently discontinued due to a side effect in 2% of patients.

If this drug is used with ribavirin, the manufacturer product information for ribavirin should be consulted for associated side effects.[Ref]

Decreased hemoglobin (less than 10 g/dL: up to 39%; less than 8.5 g/dL: up to 13%) has been reported in liver transplant recipients and/or patients with decompensated liver disease using this drug with ribavirin for 12 or 24 weeks. Ribavirin was permanently discontinued in up to 19% of patients. Immunosuppressive agents were modified in up to 10% of liver transplant recipients (modified dose due to improved organ function in at least 7%).

Increased lipase (greater than 3 times the upper limit of normal [3 x ULN]) was reported in less than 1%, 2%, and 3% of patients using this drug for 8, 12, and 24 weeks, respectively. Increased lipase (greater than 3 x ULN) was reported in 1%, 3%, and 9% of patients with compensated cirrhosis using placebo, this drug plus ribavirin for 12 weeks, and this drug for 24 weeks, respectively. Lipase elevation was transient and asymptomatic.[Ref]

Severe bradycardia and heart block have been reported when this drug was used with amiodarone and/or other agents that lower heart rate.

Serious symptomatic bradycardia has been reported in patients taking amiodarone who started therapy with this drug.[Ref]

Creatine kinase was not evaluated in some phase 3 clinical trials for this drug, but was evaluated in at least 1 trial. Isolated, asymptomatic creatine kinase elevations (at least 10 x ULN) were reported in 1% of patients using this drug for 12 weeks; such elevations were previously reported in patients using sofosbuvir with ribavirin or peginterferon/ribavirin in other clinical trials.[Ref] 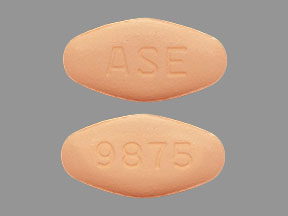