FOR TOPICAL DERMATOLOGIC USE ONLY —
NOT FOR OPHTHALMIC, ORAL, OR INTRAVAGINAL USE.

Although doxepin HCl does have H1 and H2 histamine receptor blocking actions, the exact mechanism by which doxepin exerts its antipruritic effect is unknown. Zonalon® Cream can produce drowsiness which may reduce awareness, including awareness of pruritic symptoms. In 19 pruritic eczema patients treated with Zonalon® Cream, plasma doxepin concentrations ranged from nondetectable to 47 ng/mL from percutaneous absorption. Plasma levels from topical application of Zonalon® Cream can result in CNS and other systemic side effects.

Once absorbed into the systemic circulation, doxepin undergoes hepatic metabolism that results in conversion to pharmacologically-active desmethyldoxepin. Further glucuronidation results in urinary excretion of the parent drug and its metabolites. Desmethyldoxepin has a half-life that ranges from 28 to 52 hours and is not affected by multiple dosing. Plasma levels of both doxepin and desmethyldoxepin are highly variable and are poorly correlated with dosage. Wide distribution occurs in body tissues including lungs, heart, brain, and liver. Renal disease, genetic factors, age, and other medications affect the metabolism and subsequent elimination of doxepin. (See PRECAUTIONS - Drug Interactions.)

Indications and Usage for Zonalon

Zonalon® Cream is indicated for the short-term (up to 8 days) management of moderate pruritus in adult patients with atopic dermatitis or lichen simplex chronicus. (See DOSAGE AND ADMINISTRATION.)

Because doxepin HCl has an anticholinergic effect and because significant plasma levels of doxepin are detectable after topical Zonalon® Cream application, the use of Zonalon® Cream is contraindicated in patients with untreated narrow angle glaucoma or a tendency to urinary retention.

Zonalon® Cream is contraindicated in individuals who have shown previous sensitivity to any of its components.

The sedating effects of alcoholic beverages, antihistamines, and other CNS depressants may be potentiated when Zonalon® Cream is used.

Keep this product away from the eyes.

Since drowsiness may occur with the use of Zonalon® Cream, patients should be warned of the possibility and cautioned against driving a car or operating dangerous machinery while using this drug. Patients should also be cautioned that their response to alcohol may be potentiated.

Use of Zonalon® Cream can cause Type IV hypersensitivity reactions (contact sensitization) to doxepin.

The biochemical activity of the drug metabolizing isozyme cytochrome P450 2D6 (debrisoquin hydroxylase) is reduced in a subset of the Caucasian population (about 7-10% of Caucasians are so-called "poor metabolizers"); reliable estimates of the prevalence of reduced P450 2D6 isozyme activity among Asian, African and other populations are not yet available. Poor metabolizers have higher than expected plasma concentrations of tricyclic antidepressants (TCAs) when given usual doses. Depending on the fraction of drug metabolized by P450 2D6, the increase in plasma concentration may be small, or quite large (8-fold increase in plasma AUC of the TCA).

In addition, certain drugs inhibit the activity of this isozyme and make normal metabolizers resemble poor metabolizers. An individual who is stable on a given dosage regimen of a TCA may become abruptly toxic when given one of these inhibiting drugs as concomitant therapy. The drugs that inhibit cytochrome P450 2D6 include some that are not metabolized by the enzyme (quinidine; cimetidine) and many that are substrates for P450 2D6 (many other antidepressants, phenothiazines, and the Type 1C antiarrhythmics propafenone and flecainide). While all the selective serotonin reuptake inhibitors (SSRIs), e.g., fluoxetine, sertraline, and paroxetine, inhibit P450 2D6, they may vary in the extent of inhibition. The extent to which SSRI-TCA interactions may pose clinical problems will depend on the degree of inhibition and the pharmacokinetics of the SSRI involved. Nevertheless, caution is indicated in the co-administration of TCAs with any of the SSRIs. Of particular importance, sufficient time must elapse before initiating TCA treatment in a patient being withdrawn from fluoxetine, given the long half-life of the parent and active metabolite (at least 5 weeks may be necessary).

Serious side effects and even death have been reported following the concomitant use of certain drugs with MAO inhibitors. Therefore, MAO inhibitors should be discontinued at least two weeks prior to the cautious initiation of therapy with Zonalon® Cream. The exact length of time may vary and is dependent upon the particular MAO inhibitor being used, the length of time it has been administered, and the dosage involved.

Alcohol ingestion may exacerbate the potential sedative effects of Zonalon® Cream. This is especially important in patients who may use alcohol excessively.

A case of severe hypoglycemia has been reported in a type II diabetic patient maintained on tolazamide (1 gm/day) 11 days after the addition of oral doxepin (75 mg/day).

Carcinogenesis, mutagenesis, and impairment of fertility studies have not been conducted with doxepin hydrochloride.

Reproduction studies have been performed in which doxepin was orally administered to rats and rabbits at doses up to 0.6 and 1.2 times, respectively, the estimated exposure to doxepin that results from use of 16 grams of Zonalon® Cream per day (four applications of four grams of cream per day; dose multiples reflect comparisons made following normalization of the data on the basis of body surface area estimates) and have revealed no evidence of harm to rat or rabbit fetuses due to doxepin. There are, however, no adequate and well-controlled studies in pregnant women. Because animal reproduction studies are not always predictive of human response, this drug should be used during pregnancy only if clearly needed.

One case has been reported of apnea and drowsiness in a nursing infant whose mother was taking an oral dosage form of doxepin HCl.

Because of the potential for serious adverse reactions in nursing infants from doxepin, a decision should be made whether to discontinue nursing or to discontinue the drug, taking into account the importance of the drug to the mother.

The use of Zonalon® Cream in pediatric patients is not recommended. Safe conditions for use of Zonalon® Cream in children have not been established. One case has been reported of a 2.5-year-old child who developed somnolence, grand mal seizure, respiratory depression, ECG abnormalities, and coma after treatment with Zonalon® Cream. A total of 27 grams had been applied over three days for eczema. He was treated with supportive care, activated charcoal, and systemic alkalization and recovered.

Clinical studies of Zonalon® Cream did not include sufficient numbers of subjects aged 65 and over to determine whether they respond differently from younger subjects. Other reported clinical experience has not identified differences in responses between the elderly and younger patients. In general, dose selection for an elderly patient should be cautious, usually starting at the low end of the dosing range, reflecting the greater frequency of decreased hepatic, renal or cardiac function, and of concomitant disease or other drug therapy.

The extent of renal excretion of doxepin has not been determined. Because elderly patients are more likely to have decreased renal function, care should be taken in dose selections.

Sedating drugs may cause confusion and oversedation in the elderly; elderly patients generally should be observed closely for confusion and oversedation when started on Zonalon® Cream. (See WARNINGS.) An 80-year-old male nursing home patient developed probable systemic anticholinergic toxicity which included urinary retention and delirium after Zonalon® Cream had been applied to his arms, legs and back three times daily for two days.

The table below presents the adverse events reported at an incidence of ≥ 1% in either Zonalon® or vehicle cream treatment groups during the trials:

Twenty-six cases of allergic contact dermatitis have been reported in patients using Zonalon® Cream, twenty of which were documented by positive patch test to doxepin 5% cream.

Deaths may occur from overdosage with this class of drugs. As the management is complex and changing, it is recommended that the physician contact a poison control center for current information on treatment. Signs and symptoms of toxicity develop rapidly after tricyclic antidepressant overdose; therefore, hospital monitoring is required as soon as possible.

Should overdosage with topical application of Zonalon® Cream occur, the signs and symptoms may include: cardiac dysrhythmias, severe hypotension, convulsions, and CNS depression, including coma. Changes in the electrocardiogram, particularly in QRS axis or width, are clinically significant indicators of tricyclic antidepressant toxicity.

Obtain an ECG and immediately initiate cardiac monitoring. Protect the patient's airway, establish an intravenous line and initiate gastric decontamination. A minimum of six hours of observation with cardiac monitoring and observation for signs of CNS or respiratory depression, hypotension, cardiac dysrhythmias and/or conduction blocks, and seizures is strongly advised. If signs of toxicity occur at any time during this period, extended monitoring is recommended. There are case reports of patients succumbing to fatal dysrhythmias late after overdose; these patients had clinical evidence of significant poisoning prior to death and most received inadequate gastrointestinal decontamination. Monitoring of plasma drug levels should not guide management of the patient.

In rare instances, hemoperfusion may be beneficial in acute refractory cardiovascular instability in patients with acute toxicity. However, hemodialysis, peritoneal dialysis, exchange transfusions, and forced diuresis generally have been reported as ineffective in tricyclic antidepressant poisoning.

In patients with CNS depression, early intubation is advised because of the potential for abrupt deterioration. Seizures should be controlled with benzodiazepines, or if these are ineffective, other anticonvulsants (e.g., phenobarbital, phenytoin). Physostigmine is not recommended except to treat life-threatening symptoms that have been unresponsive to other therapies, and then only in consultation with a poison control center.

The principles of management of child and adult overdosages are similar. It is strongly recommended that the physician contact the local poison control center for specific pediatric treaatment.

Zonalon is a registered trademark of Delcor Asset Corporation, a Mylan Company

For Topical Dermatologic Use Only

Warnings: For External Use Only. Not For Oral, Intravaginal or Ophthalmic Use. Keep away from eyes.

Directions: Apply a thin film of Zonalon® Cream four times each day with at least a 3 to 4 hour
interval between applications. If excessive drowsiness occurs it may be necessary to do one or
more of the following: reduce the body surface area treated, reduce the number of applications
per day, reduce the amount of cream applied, or discontinue the drug.

Zonalon is a registered trademark of Delcor Asset Corporation, a Mylan Company 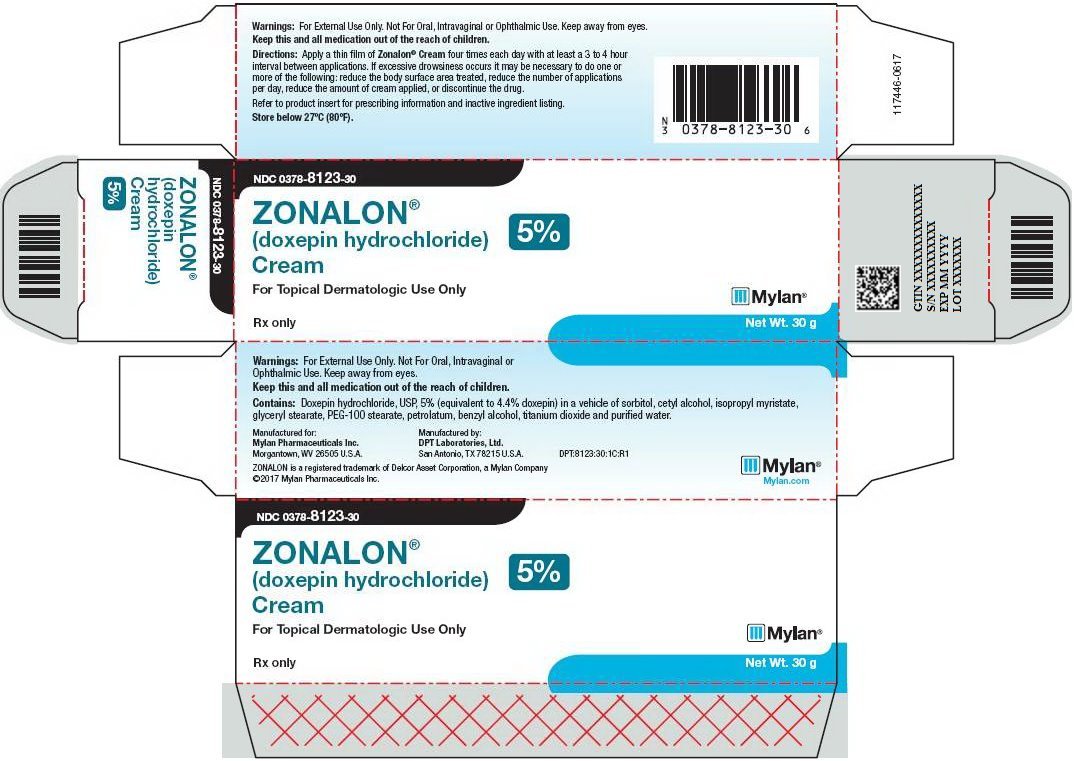