Indications and Usage for Triklo Capsules

Triklo Capsules are indicated as an adjunct to diet to reduce triglyceride (TG) levels in adult patients with severe (≥500 mg/dL) hypertriglyceridemia (HTG).

Usage Considerations: Patients should be placed on an appropriate lipid-lowering diet before receiving Triklo Capsules and should continue this diet during treatment with Triklo Capsules.

Laboratory studies should be done to ascertain that the lipid levels are consistently abnormal before instituting therapy with Triklo Capsules. Every attempt should be made to control serum lipids with appropriate diet, exercise, weight loss in obese patients, and control of any medical problems such as diabetes mellitus and hypothyroidism that are contributing to the lipid abnormalities. Medications known to exacerbate hypertriglyceridemia (such as beta blockers, thiazides, estrogens) should be discontinued or changed if possible prior to consideration of triglyceride-lowering drug therapy.

The effect of Triklo Capsules on the risk for pancreatitis has not been determined.

The effect of Triklo Capsules on cardiovascular mortality and morbidity has not been determined.

The daily dose of Triklo Capsules is 4 grams per day. The daily dose may be taken as a single 4-gram dose (4 capsules) or as two 2-gram doses (2 capsules given twice daily).

Triklo Capsules are supplied as 1 gram transparent, soft-gelatin capsules filled with light-yellow oil and imprinted with "AN34".

Triklo Capsules are contraindicated in patients with known hypersensitivity (e.g., anaphylactic reaction) to Triklo Capsules or any of its components.

In patients with hepatic impairment, alanine aminotransferase (ALT) and aspartate aminotransferase (AST) levels should be monitored periodically during therapy with Triklo Capsules. In some patients, increases in ALT levels without a concurrent increase in AST levels were observed.

Laboratory studies should be performed periodically to measure the patient's TG levels during therapy with Triklo Capsules.

In a double-blind, placebo-controlled trial of 663 subjects with symptomatic paroxysmal AF (n=542) or persistent AF (n=121), recurrent AF or flutter was observed in subjects randomized to Triklo Capsules who received 8 grams/day for 7 days and 4 grams/day thereafter for 23 weeks at a higher rate relative to placebo. Subjects in this trial had median baseline triglycerides of 127 mg/dL, had no substantial structural heart disease, were taking no anti-arrhythmic therapy (rate control permitted), and were in normal sinus rhythm at baseline.

At 24 weeks, in the paroxysmal AF stratum, there were 129 (47%) first recurrent symptomatic AF or flutter events on placebo and 141 (53%) on Triklo Capsules [primary endpoint, HR 1.19; 95% CI: 0.93, 1.35]. In the persistent AF stratum, there were 19 (35%) events on placebo and 34 (52%) events on Triklo Capsules [HR 1.63; 95% CI: 0.91, 2.18]. For both strata combined, the HR was 1.25; 95% CI: 1, 1.4. Although the clinical significance of these results is uncertain, there is a possible association between Triklo Capsules and more frequent recurrences of symptomatic atrial fibrillation or flutter in patients with paroxysmal or persistent atrial fibrillation, particularly within the first 2 to 3 months of initiating therapy.

Triklo Capsules are not indicated for the treatment of AF or flutter.

Adverse reactions reported in at least 3% and at a greater rate than placebo for subjects treated with omega-3-acid ethyl esters based on pooled data across 23 clinical trials are listed in Table 1.

Additional adverse reactions from clinical trials are listed below:

In addition to adverse reactions reported from clinical trials, the events described below have been identified during post-approval use of omega-3-acid ethyl esters. Because these events are reported voluntarily from a population of unknown size, it is not possible to reliably estimate their frequency or to always establish a causal relationship to drug exposure.

The following events have been reported: anaphylactic reaction, hemorrhagic diathesis.

Anticoagulants or Other Drugs Affecting Coagulation

Some trials with omega-3-acids demonstrated prolongation of bleeding time. The prolongation of bleeding time reported in these trials has not exceeded normal limits and did not produce clinically significant bleeding episodes. Clinical trials have not been done to thoroughly examine the effect of Triklo Capsules and concomitant anticoagulants. Patients receiving treatment with Triklo Capsules and an anticoagulant or other drug affecting coagulation (e.g., anti-platelet agents) should be monitored periodically.

Animal Data: Triklo Capsules have been shown to have an embryocidal effect in pregnant rats when given in doses resulting in exposures 7 times the recommended human dose of 4 grams/day based on a body surface area comparison.

In female rats given oral gavage doses of 100, 600, and 2,000 mg/kg/day beginning 2 weeks prior to mating and continuing through gestation and lactation, no adverse effects were observed in the high-dose group (5 times human systemic exposure following an oral dose of 4 grams/day based on body surface area comparison).

In pregnant rats given oral gavage doses of 1,000, 3,000, and 6,000 mg/kg/day from gestation day 6 through 15, no adverse effects were observed (14 times human systemic exposure following an oral dose of 4 grams/day based on a body surface area comparison).

Studies with Triklo Capsules have demonstrated excretion in human milk. The effect of this excretion on the infant of a nursing mother is unknown; caution should be exercised when Triklo Capsules are administered to a nursing mother. An animal study in lactating rats given oral gavage 14C-ethyl EPA demonstrated that drug levels were 6 to 14 times higher in milk than in plasma.

Triklo Capsules do not have any known drug abuse or withdrawal effects.

Triklo Capsules, a lipid-regulating agent, are supplied as a liquid-filled gel capsule for oral administration. Each 1 gram capsule of Triklo Capsules contains at least 900 mg of the ethyl esters of omega-3 fatty acids sourced from fish oils. These are predominantly a combination of ethyl esters of eicosapentaenoic acid (EPA - approximately 465 mg) and docosahexaenoic acid (DHA - approximately 375 mg).

The mechanism of action of Triklo Capsules is not completely understood. Potential mechanisms of action include inhibition of acyl-CoA:1,2-diacylglycerol acyltransferase, increased mitochondrial and peroxisomal β-oxidation in the liver, decreased lipogenesis in the liver, and increased plasma lipoprotein lipase activity. Triklo Capsules may reduce the synthesis of triglycerides in the liver because EPA and DHA are poor substrates for the enzymes responsible for TG synthesis, and EPA and DHA inhibit esterification of other fatty acids.

Age: Uptake of EPA and DHA into serum phospholipids in subjects treated with Triklo Capsules was independent of age (<49 years versus ≥49 years).

Gender: Females tended to have more uptake of EPA into serum phospholipids than males. The clinical significance of this is unknown.

Pediatric: Pharmacokinetics of Triklo Capsules have not been studied.

Renal or Hepatic Impairment: Triklo Capsules have not been studied in patients with renal or hepatic impairment.

Simvastatin: In a 14-day trial of 24 healthy adult subjects, daily co-administration of simvastatin 80 mg with Triklo Capsules 4 grams did not affect the extent (AUC) or rate (Cmax) of exposure to simvastatin or the major active metabolite, beta-hydroxy simvastatin at steady-state.

Rosuvastatin: In a 14-day trial of 48 healthy adult subjects, daily co-administration of rosuvastatin 40 mg with Triklo Capsules 4 grams did not affect AUC or Cmax of exposure to rosuvastatin at steady-state.

In a rat carcinogenicity study with oral gavage doses of 100, 600, and 2,000 mg/kg/day, males were treated with Triklo Capsules for 101 weeks and females for 89 weeks without an increased incidence of tumors (up to 5 times human systemic exposures following an oral dose of 4 grams/day based on a body surface area comparison). Standard lifetime carcinogenicity bioassays were not conducted in mice.

Triklo Capsules were not mutagenic or clastogenic with or without metabolic activation in the bacterial mutagenesis (Ames) test with Salmonella typhimurium and Escherichia coli or in the chromosomal aberration assay in Chinese hamster V79 lung cells or human lymphocytes. Triklo Capsules were negative in the in vivo mouse micronucleus assay.

In a rat fertility study with oral gavage doses of 100, 600, and 2,000 mg/kg/day, males were treated for 10 weeks prior to mating and females were treated for 2 weeks prior to and throughout mating, gestation and lactation. No adverse effect on fertility was observed at 2,000 mg/kg/day (5 times human systemic exposure following an oral dose of 4 grams/day based on a body surface area comparison).

The effects of omega-3-acid ethyl esters 4 grams per day were assessed in 2 randomized, placebo-controlled, double-blind, parallel-group trials of 84 adult subjects (42 on omega-3-acid ethyl esters, 42 on placebo) with very high triglyceride levels. Subjects whose baseline triglyceride levels were between 500 and 2,000 mg/dL were enrolled in these 2 trials of 6 and 16 weeks' duration. The median triglyceride and LDL-C levels in these subjects were 792 mg/dL and 100 mg/dL, respectively. Median HDL-C level was 23 mg/dL.

The changes in the major lipoprotein lipid parameters for the groups receiving omega-3-acaid ethyl esters or placebo are shown in Table 2.

Omega-3-acid ethyl esters 4 grams per day reduced median TG, VLDL-C, and non-HDL-C levels and increased median HDL-C from baseline relative to placebo. Treatment with Triklo Capsules to reduce very high TG levels may result in elevations in LDL-C and non-HDL-C in some individuals. Patients should be monitored to ensure that the LDL-C level does not increase excessively.

The effect of Triklo Capsules on the risk of pancreatitis has not been determined.

The effect of Triklo Capsules on cardiovascular mortality and morbidity has not been determined. 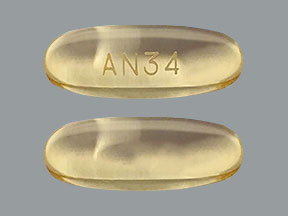