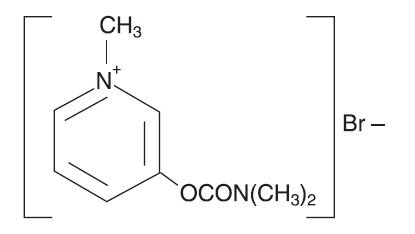 Pyridostigmine bromide inhibits the destruction of acetylcholine by cholinesterase and thereby permits freer transmission of nerve impulses across the neuromuscular junction. Pyridostigmine is an analog of neostigmine (Prostigmin), but differs from it in certain clinically significant respects; for example, pyridostigmine is characterized by a longer duration of action and fewer gastrointestinal side effects.

Pyridostigmine Bromide Extended-release Tablets are useful in the treatment of myasthenia gravis.

Pyridostigmine Bromide Extended-release Tablets are contraindicated in mechanical intestinal or urinary obstruction, and particular caution should be used in its administration to patients with bronchial asthma. Care should be observed in the use of atropine for counteracting side effects, as discussed below.

Although failure of patients to show clinical improvement may reflect underdosage, it can also be indicative of overdosage. As is true of all cholinergic drugs, overdosage of Pyridostigmine Bromide Extended-release Tablets may result in cholinergic crisis, a state characterized by increasing muscle weakness which, through involvement of the muscles of respiration, may lead to death. Myasthenic crisis due to an increase in the severity of the disease is also accompanied by extreme muscle weakness, and thus may be difficult to distinguish from cholinergic crisis on a symptomatic basis. Such differentiation is extremely important, since increases in doses of Pyridostigmine Bromide Extended-release Tablets or other drugs of this class in the presence of cholinergic crisis or of a refractory or “insensitive” state could have grave consequences. Osserman and Genkins1, indicate that the differential diagnosis of the two types of crisis may require the use of Tensilon (edrophonium chloride) as well as clinical judgment. The treatment of the two conditions obviously differs radically. Whereas the presence of myasthenic crisis suggests the need for more intensive anticholinesterase therapy, the diagnosis of cholinergic crisis, according to Osserman and Genkins1,calls for the prompt withdrawal of all drugs of this type. The immediate use of atropine in cholinergic crisis is also recommended.

Atropine may also be used to abolish or obtund gastrointestinal side effects or other muscarinic reactions; but such use, by masking signs of overdosage, can lead to inadvertent induction of cholinergic crisis.

For detailed information on the management of patients with myasthenia gravis, the physician is referred to one of the excellent reviews such as those by Osserman and Genkins2, Grob3 or Schwab.4,5

Pyridostigmine is mainly excreted unchanged by the kidney.6,7,8 Therefore, lower doses may be required in patients with renal disease, and treatment should be based on titration of drug dosage to effect.6,7

The side effects of Pyridostigmine Bromide Extended-release Tablets are most commonly related to overdosage and generally are of two varieties, muscarinic and nicotinic. Among those in the former group are nausea, vomiting, diarrhea, abdominal cramps, increased peristalsis, increased salivation, increased bronchial secretions, miosis and diaphoresis. Nicotinic side effects are comprised chiefly of muscle cramps, fasciculation and weakness. Muscarinic side effects can usually be counteracted by atropine, but for reasons shown in the preceding section the expedient is not without danger. As with any compound containing the bromide radical, a skin rash may be seen in an occasional patient. Such reactions usually subside promptly upon discontinuance of the medication.

The size and frequency of the dosage must be adjusted to the needs of the individual patient.

One to three 180 mg tablets, once or twice daily, will usually be sufficient to control symptoms; however, the needs of certain individuals may vary markedly from this average. The interval between doses should be at least 6 hours. For optimum control, it may be necessary to use the more rapidly acting regular tablets or oral solution in conjunction with extended-release tablets therapy.

NOTE: For information on a diagnostic test for myasthenia gravis, and for the evaluation and stabilization of therapy, please see product literature on Tensilon (edrophonium chloride).

How is Pyridostigmine ER tablets Supplied

Pyridostigmine Bromide Extended-release Tabletsare available as light straw-colored, capsule-shaped tablets containing 180 mg pyridostigmine bromide in bottles of 30 (NDC 68682-301-30). Each tablet is engraved “MES V 180” on one side and is single-scored on the other.

Note: Because of the hygroscopic nature of the Extended-release Tablets, mottling may occur. This does not affect their efficacy. 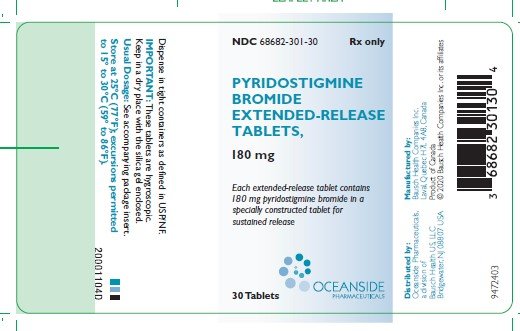 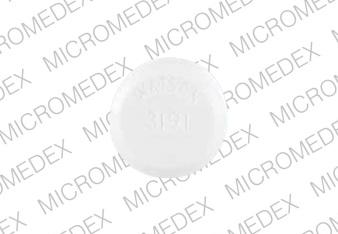