Phenazopyridine Hydrochloride, USP, is light or dark red to dark violet, odorless, slightly bitter, crystalline powder. It has a specific local analgesic effect in the urinary tract, promptly relieving burning and pain. It has the following structural formula:

Phenazopyridine HCl is excreted in the urine where it exerts a topical analgesic effect on the mucosa of the urinary tract. This action helps to relieve pain, burning, urgency and frequency. The precise mechanism of action is not known.

Indications and Usage for Phenazopyridine Tablets

Phenazopyridine HCl is indicated for the symptomatic relief of pain, burning, urgency, frequency, and other discomforts arising from irritation of the lower urinary tract mucosa caused by infection, trauma, surgery, endoscopic procedures, or the passage of sounds or catheters. The use of Phenazopyridine HCl for relief of symptoms should not delay definitive diagnosis and treatment of causative conditions. Because it provides only symptomatic relief, prompt appropriate treatment of the cause of pain must be instituted and Phenazopyridine HCl should be discontinued when symptoms are controlled.

The analgesic action may reduce or eliminate the need for systemic analgesics or narcotics. It is, however, compatible with antibacterial therapy and can help to relieve pain and discomfort during the interval before antibacterial therapy controls the infection. Treatment of a urinary tract infection with Phenazopyridine HCl should not exceed 2 days because there is a lack of evidence that the combined administration of Phenazopyridine HCl and an antibacterial provides greater benefit than administration of the antibacterial alone after 2 days. (See DOSAGE AND ADMINISTRATION section.)

General: A yellowish tinge of the skin or sclera may indicate accumulation due to impaired renal excretion and the need to discontinue therapy. The decline in renal function associated with advanced age should be kept in mind.

NOTE: Patients should be informed that Phenazopyridine HCl produces a reddish-orange discoloration of the urine and may stain fabric. Staining of contact lenses has been reported.

Laboratory Test Interaction: Due to its properties as an azo dye, Phenazopyridine HCl may interfere with urinalysis based on spectrometry or color reactions.

Although no association between Phenazopyridine HCl and human neoplasia has been reported, adequate epidemiological studies along these lines have not been conducted.

Pregnancy Category B: Reproduction studies have been performed in rats at doses up to 50 mg/kg/day and have revealed no evidence of impaired fertility or harm to the fetus due to Phenazopyridine HCl. There are, however, no adequate and well controlled studies in pregnant women. Because animal reproduction studies are not always predictive of human response, this drug should be used during pregnancy only if clearly needed.

Nursing mothers: No information is available on the appearance of Phenazopyridine HCl, or its metabolites in human milk.

200 mg Tablets: Average adult dosage is one tablet 3 times a day after meals.

When used concomitantly with an antibacterial agent for the treatment of a urinary tract infection, the administration of Phenazopyridine HCl should not exceed 2 days.

Exceeding the recommended dose in patients with good renal function or administering the usual dose to patients with impaired renal function (common in elderly patients) may lead to increased serum levels and toxic reactions. Methemoglobinemia generally follows a massive, acute overdose. Methylene blue, 1 to 2 mg/kg/body weight intravenously or ascorbic acid 100 to 200 mg given orally should cause prompt reduction of the methemoglobinemia and disappearance of the cyanosis which is an aid in diagnosis. Oxidative Heinz body hemolytic anemia may also occur, and “bite cells” (degmacytes) may be present in a chronic overdosage situation. Red blood cell G-6-PD deficiency may predispose to hemolysis. Renal and hepatic impairment and occasional failure, usually due to hypersensitivity, may also occur.

How is Phenazopyridine Tablets Supplied

Appearance: Reddish-brown, round, film coated tablets debossed “611” on one side and plain on the other.

Appearance: Reddish-brown, round, film coated tablets debossed “612” on one side and plain on the other.

DISPENSE contents with a child-resistant closure (as required) and in a tight container as defined in the USP. 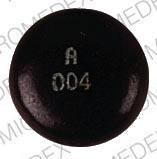