Indications and Usage for Octaplas

Replacement of coagulation factors in patients with acquired deficiencies due to liver disease or undergoing cardiac surgery or liver transplant:

Administer Octaplas after thawing using an infusion set with a filter.

Octaplas should be inspected visually for particulate matter and discoloration prior to administration, whenever solution and container permit. Do not use if turbid.

Solution for infusion containing 45 to 70 mg human plasma proteins per mL in a 200 mL volume.

Do not use Octaplas in patients with:

Transfusion reactions can occur with ABO blood group mismatches. Administration of Octaplas must be based on ABO-blood group compatibility.

Thrombosis can occur due to low levels of Protein S. Monitor for signs and symptoms of thrombosis in patients at risk.

Because Octaplas is made from human plasma, it may carry a risk of transmitting infectious agents, e.g., viruses, the variant Creutzfeldt-Jakob disease (vCJD) agent and theoretically, the Creutzfeldt-Jakob disease (CJD) agent. ALL infections suspected by a physician possibly to have been transmitted by this product should be reported by the physician or other healthcare provider to Octapharma [1-866-766-4860] or FDA at 1-800-FDA-1088 or www.fea.gov/medwatch. See Description ( 11 )

The most common adverse reactions observed in ≥ 1% of subjects included pruritis, urticaria, nausea, headache and paresthesia.

Adverse reactions observed in clinical trials derive from 9 clinical trials. The mean dose administered ranged from 6 to 15 milliliters/kg body weight; when used in plasma exchange the dose was between 15 to 75 milliliters/kg. Two of the studies were conducted in healthy volunteers (n=90).

In total, 359 subjects received about 600 transfusion episodes in these trials.

The following table shows the adverse reactions observed in ≥ 1% of subjects in order of severity:

Because post-marketing reporting of adverse reactions is voluntary and from a population of uncertain size, it is not always possible to reliably estimate the frequency of these reactions or establish a causal relationship to product exposure.

Do not inject drugs containing calcium in the same intravenous line with Octaplas because precipitants may block the line.

Efficacy and safety of Octaplas in lactating women is unknown.

Octaplas was evaluated in 91 pediatric patients (age range 0-20 years) in two post-marketing requirement studies. Patients were dosed based on body weight and doses were adjusted as needed. There were no hyperfibrinolytic or treatment-related thromboembolic events reported by investigators. Please refer to Section 14 for information on clinical studies in the pediatric population.

Clinical studies of Octaplas did not include sufficient numbers of subjects aged 65 years and over to determine whether they respond differently from younger subjects. Other reported clinical experience has not identified differences in responses between the elderly and younger patients. In general, dose selection for an elderly patient should be cautious, usually starting at the low end of the dosing range, reflecting the greater frequency of decreased hepatic, renal, or cardiac function, and of concomitant disease or other drug therapy.

The active ingredient comprises plasma proteins such as albumin, immunoglobulins, other globulins, coagulation factors, complement proteins and protease inhibitors. The content and distribution of plasma proteins in Octaplas are comparable to reference ranges for healthy blood donors, except for Protein S and alpha 2-antiplasmin. Within a mean total protein content of 57 mg/mL, albumin comprises ~50% and immunoglobulin classes G, A, and M comprise ~12%, ~3% and ~1%, respectively. Protein S and alpha 2-antiplasmin, which are labile to S/D treatment, are controlled to ensure levels in the final product of ≥ 0.4 International Units (IU) per mL. Plasma lipids and lipoproteins are reduced due to S/D treatment and subsequent oil and solid phase extraction.

Octaplas is manufactured from human plasma collected in US licensed plasma donation centers. All plasma donations are tested for viral markers in compliance with US regulation. In addition, the manufacturing plasma pool may not contain a titer of human Parvovirus B19 DNA exceeding 10.0 IU per microliter and must have a negative result in a test for human Hepatitis E Virus (HEV) RNA by NAT PCR with a sensitivity of ≤ 2.5 log 10 IU/mL.

Each lot of Octaplas is manufactured from pooled plasma of a single ABO blood group (A, B, AB, or O). The manufacturing plasma pool is limited to 390 kg comprising 630-1,520 individual donors. Frozen plasma units are thawed and pooled. Sodium dihydrogen phosphate dihydrate is added as a buffer against increase in pH due to loss of CO 2 . After filtration through a 1 µm pore size membrane, the plasma pool is treated with S/D reagents [1% tri(n-butyl) phosphate (TNBP) and 1% Octoxynol for 1-1.5 hours at +30°C (86°F)] to inactivate enveloped viruses. The S/D reagents are removed by sequential oil and solid phase extraction procedures. Glycine is added to adjust the osmolality. Plasma with glycine is applied to a column filled with affinity ligand resin intended for selective binding of prion protein (PrP Sc ). The effectiveness of this step in removal of prion infectivity from the product has not been established. After sterile filtration, the product is filled into sterile polyvinyl chloride blood bags, labeled, deep-frozen and stored at a temperature of ≤ -18°C (-0.4°F). The finished product is tested for coagulation factors II, V, VII, VIII, IX, X and XI, Protein C, Protein S, alpha 2-antiplasmin, fibrinogen and ADAMTS13.

The S/D treatment step has been validated to effectively inactivate relevant pathogenic and model enveloped viruses as summarized in Table 1.

TNBP and Octoxynol used in the manufacturing process for viral inactivation may be present in the final product at levels not exceeding 2.0 µg/mL for TNBP and 5.0 µg/mL for Octoxynol.

No evidence of toxicity was observed for TNBP + Octoxynol in sub-acute toxicity studies. [ 5 ]

No evidence of mutagenicity was observed in in vitro or in vivo mutagenicity studies performed for TNBP. [ 6 - 11 ]

The Octaplas predecessor product was studied in healthy volunteers and in subjects with liver disease, liver transplantation, cardiac surgery and TTP.

A prospective, open-label, parallel group, non-randomized study was performed in surgical patients who were allocated to receive either a single infusion of Octaplas (N=20) or no plasma treatment (N=26) during open heart surgery.[ 12 ] A historical control group of patients who received standard single-donor FFP (N=20) was used to compare safety and efficacy. The average dose of Octaplas was 700 mL (range 200 to 3400 mL), compared with 1012 mL (range 500 to 4000 mL) for standard FFP. The choice of plasma product (Octaplas or FFP) did not appear to influence the postoperative course with respect to volume of postoperative bleeding, need for reoperation secondary to bleeding or length of postoperative hospital stay. This study was not powered to detect a difference in efficacy.

A prospective, single-blind, randomized study investigated the safety and efficacy of Octaplas compared with standard FFP in adult patients (N=55) with coagulopathy due to liver disease (LD) or liver transplantation (LTX), and for management of newly diagnosed thrombotic thrombocytopenic purpura (TTP).[ 13 - 15 ] Octaplas was infused in 13 of 24 patients with LD, 12 of 25 patients with LTX and all 3 patients with TTP. Within the LD and the LTX groups, patients were comparable in all clinical aspects and in the dose of plasma given. There were no relevant changes in any coagulation factors, but Protein C and fibrinogen improved in both groups, accompanied by a corresponding improvement in partial thromboplastin time (PTT) levels 24 hours after infusion. Similar degrees of correction of prolonged international normalized ratio (INR) and PTT values were achieved with both Octaplas and FFP. All 3 patients with TTP attained platelet counts of >50 x 10 9 /L by Day 10. This study was not powered to detect a difference in efficacy.

A prospective, open label, non-randomized study was conducted in postoperative open heart surgery patients (N=67) admitted to the surgical intensive care unit who were in need of plasma transfusion for acute bleeding or were at risk of bleeding; 36 patients received Octaplas (600 mL) and 31 received FFP (600 mL).[ 16 ] Measured parameters included PT, PTT, free Protein S and alpha 2-antiplasmin measured before treatment and 60 minutes after termination of plasma infusion. The decrease in PT and PTT and the rise in free Protein S were similar between the two study arms. Alpha 2-antiplasmin declined after Octaplas and remained unaffected by FFP. Clinical hemostasis evaluations were similar between the two treatment regimens. This study was not powered to detect a difference in efficacy.

A prospective, open-label, randomized, controlled, cross-over study in two groups (N=30 each) of healthy adult volunteers (mean age: 32.6±9.1 years) was carried out to show the relative recovery of coagulation factors and other hemostatic parameters after infusion of 1200 mL of Octaplas or the predecessor product, following a standard plasmapheresis of 600 mL. Coagulation factors (FI, FII, FV, FVII, FVIII, FIX, FX, and FXI) and hemostatic parameters (aPTT, PT and Protein C) were assessed post-infusion at 15 minutes, 2 hours and 24 hours. The primary objective was to demonstrate equivalence for recovery using a 10% margin. All coagulation and hemostatic parameters met the equivalence criterion. To verify the assumption of improvement in alpha 2-antiplasmin concentrations, a test for superiority was conducted. Statistically significant differences favoring Octaplas were found at 15 minutes (P=0.0012) and 2 hours (P=0.0190) post-transfusion in the per protocol population. Increased plasma levels of alpha 2-antiplasmin after infusion of Octaplas compared with the predecessor product may result from increased concentrations of this plasmin inhibitor found in Octaplas.

A prospective, open-label, multicenter, single arm, postmarketing study was conducted to investigate the safety, tolerability and efficacy of Octaplas in the management of pediatric patients requiring replacement of multiple coagulation factors. A total of 50 patients [37 neonates/infants (0 to 2 years old) and 13 children and adolescents (> 2 to 16 years old)] requiring cardiac surgery (N=40), liver transplantation and/or with liver dysfunction (N=5), sepsis-related coagulopathy (N=4) and hypoxic encephalopathy (N=1) were included in the study. There were no hyperfibrinolytic or treatment-related thromboembolic events reported by investigators. The investigators’ overall safety assessment was prospectively defined as excellent (treatment was well tolerated by the patient), moderate (adverse reactions were observed, but easily resolved or not clinically significant) or poor (adverse reactions were observed requiring significant medical intervention) to describe the patient’s experience with Octaplas. Overall safety was assessed by investigators as ”excellent” for all 50 patients. Hemostatic parameters as measured by INR, PT, aPTT, thromboelastography (TEG) or thromboelastometry (TEM) were within expected ranges following use of Octaplas.

A prospective, open-label, multicenter, single-arm, postmarketing study assessed the safety and tolerability of Octaplas in the management of subjects who underwent therapeutic plasma exchange (TPE). A total of 102 TPE procedures were performed in 41 subjects aged 2 to 20 years [young children: Group 1 (age 2 to <12): N=15; adolescents: Group 2 (12 to <17): N=13; and young adults: Group 3 (≥17): N=13]. Overall, a total of 135,137 mL of Octaplas was administered. The underlying disease category for these subjects included immune system disorders (N=14), nervous system disorders (N=12), renal and urinary disorders (N=8), infections and infestations (N=4), and other disorders (N=3). Each subject underwent between 1 and 6 TPEs (mean: 2.5 TPEs). The actual dose administered per TPE ranged from 4 mL/kg to 72 mL/kg (mean: 28.6 mL/kg), with a mean total volume administered per TPE of 1325 mL (range: 113 mL to 4000 mL). Infusion rates (mean) were similar across age groups (0.32 mL/kg/min to 0.41 mL/kg/min). No thrombotic or thromboembolic events were found in any study subject. In total, 8 adverse reactions were found in 4 subjects (9.8%). These included 5 adverse reactions in three adolescents (4 in TPE #1 and 1 in TPE #4) and 3 adverse reactions in one young adult (2 in TPE #1 and 1 in TPE #2). Adverse reactions in adolescents included citrate toxicity (2 in 2 subjects), and headache, pyrexia, and urticaria (each reported in 1 subject), while adverse reactions found in young adults included inflammatory marker (C-reactive protein, procalcitonin) increased, myalgia, and nausea (each reported in 1 subject). Most (7/8) adverse reactions were mild in intensity and recovered/resolved by end of study. No treatment-related serious adverse events were reported. Overall safety was assessed by investigators as excellent for most subjects (>90%) at 24 hours after each TPE throughout the study using prespecified definitions of excellent, good and poor.


How Supplied/Storage and Handling

Remind patients that Octaplas is made from human blood and may contain infectious agents that can cause disease. Report flu-like or other symptoms or viral infection. 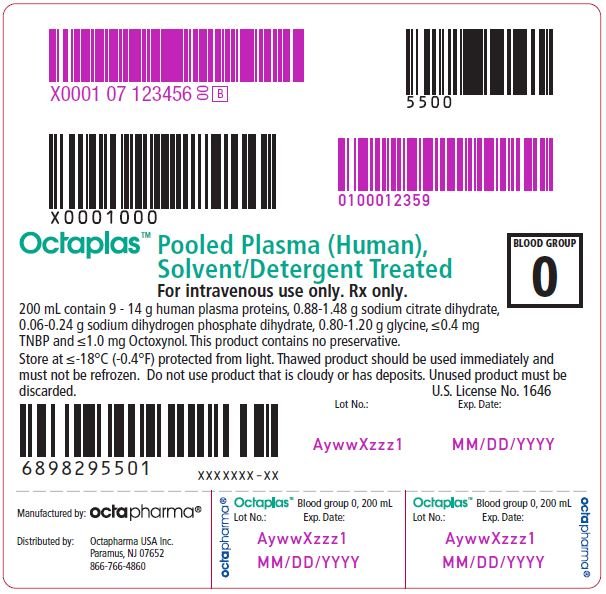