Minipress® (prazosin hydrochloride), a quinazoline derivative, is the first of a new chemical class of antihypertensives. It is the hydrochloride salt of 1-(4-amino-6,7-dimethoxy-2-quinazolinyl)-4-(2-furoyl) piperazine and its structural formula is:

It is a white, crystalline substance, slightly soluble in water and isotonic saline, and has a molecular weight of 419.87. Each 1 mg capsule of Minipress for oral use contains drug equivalent to 1 mg free base.

The exact mechanism of the hypotensive action of prazosin is unknown. Prazosin causes a decrease in total peripheral resistance and was originally thought to have a direct relaxant action on vascular smooth muscle. Recent animal studies, however, have suggested that the vasodilator effect of prazosin is also related to blockade of postsynaptic alpha-adrenoceptors. The results of dog forelimb experiments demonstrate that the peripheral vasodilator effect of prazosin is confined mainly to the level of the resistance vessels (arterioles). Unlike conventional alpha-blockers, the antihypertensive action of prazosin is usually not accompanied by a reflex tachycardia. Tolerance has not been observed to develop in long term therapy.

Hemodynamic studies have been carried out in man following acute single dose administration and during the course of long term maintenance therapy. The results confirm that the therapeutic effect is a fall in blood pressure unaccompanied by a clinically significant change in cardiac output, heart rate, renal blood flow and glomerular filtration rate. There is no measurable negative chronotropic effect.

In clinical studies to date, prazosin hydrochloride has not increased plasma renin activity.

In man, blood pressure is lowered in both the supine and standing positions. This effect is most pronounced on the diastolic blood pressure.

Following oral administration, human plasma concentrations reach a peak at about three hours with a plasma half-life of two to three hours. The drug is highly bound to plasma protein. Bioavailability studies have demonstrated that the total absorption relative to the drug in a 20% alcoholic solution is 90%, resulting in peak levels approximately 65% of that of the drug in solution. Animal studies indicate that prazosin hydrochloride is extensively metabolized, primarily by demethylation and conjugation, and excreted mainly via bile and feces. Less extensive human studies suggest similar metabolism and excretion in man.

In clinical studies in which lipid profiles were followed, there were generally no adverse changes noted between pre- and post-treatment lipid levels.

Indications and Usage for Minipress

Minipress is indicated for the treatment of hypertension, to lower blood pressure. Lowering blood pressure reduces the risk of fatal and nonfatal cardiovascular events, primarily strokes and myocardial infarctions. These benefits have been seen in controlled trials of antihypertensive drugs from a wide variety of pharmacologic classes, including this drug.

Numerous antihypertensive drugs, from a variety of pharmacologic classes and with different mechanisms of action, have been shown in randomized controlled trials to reduce cardiovascular morbidity and mortality, and it can be concluded that it is blood pressure reduction, and not some other pharmacologic property of the drugs, that is largely responsible for those benefits. The largest and most consistent cardiovascular outcome benefit has been a reduction in the risk of stroke, but reductions in myocardial infarction and cardiovascular mortality also have been seen regularly.

Elevated systolic or diastolic pressure causes increased cardiovascular risk, and the absolute risk increase per mmHg is greater at higher blood pressures, so that even modest reductions of severe hypertension can provide substantial benefit. Relative risk reduction from blood pressure reduction is similar across populations with varying absolute risk, so the absolute benefit is greater in patients who are at higher risk independent of their hypertension (for example, patients with diabetes or hyperlipidemia), and such patients would be expected to benefit from more aggressive treatment to a lower blood pressure goal.

Minipress can be used alone or in combination with other antihypertensive drugs such as diuretics or beta-adrenergic blocking agents.

Minipress is contraindicated in patients with known sensitivity to quinazolines, prazosin, or any of the inert ingredients.

As with all alpha-blockers, Minipress may cause syncope with sudden loss of consciousness. In most cases, this is believed to be due to an excessive postural hypotensive effect, although occasionally the syncopal episode has been preceded by a bout of severe tachycardia with heart rates of 120–160 beats per minute. Syncopal episodes have usually occurred within 30 to 90 minutes of the initial dose of the drug; occasionally, they have been reported in association with rapid dosage increases or the introduction of another antihypertensive drug into the regimen of a patient taking high doses of Minipress. The incidence of syncopal episodes is approximately 1% in patients given an initial dose of 2 mg or greater. Clinical trials conducted during the investigational phase of this drug suggest that syncopal episodes can be minimized by limiting the initial dose of the drug to 1 mg, by subsequently increasing the dosage slowly, and by introducing any additional antihypertensive drugs into the patient's regimen with caution (see DOSAGE AND ADMINISTRATION). Hypotension may develop in patients given Minipress who are also receiving a beta-blocker such as propranolol.

If syncope occurs, the patient should be placed in the recumbent position and treated supportively as necessary. This adverse effect is self-limiting and in most cases does not recur after the initial period of therapy or during subsequent dose titration.

Patients should always be started on the 1 mg capsules of Minipress. The 2 and 5 mg capsules are not indicated for initial therapy.

More common than loss of consciousness are the symptoms often associated with lowering of the blood pressure, namely, dizziness and lightheadedness. The patient should be cautioned about these possible adverse effects and advised what measures to take should they develop. The patient should also be cautioned to avoid situations where injury could result should syncope occur during the initiation of Minipress therapy.

Prolonged erections and priapism have been reported with alpha-1 blockers including prazosin in post marketing experience. In the event of an erection that persists longer than 4 hours, seek immediate medical assistance. If priapism is not treated immediately, penile tissue damage and permanent loss of potency could result.

Intraoperative Floppy Iris Syndrome (IFIS) has been observed during cataract surgery in some patients treated with alpha-1 blockers. This variant of small pupil syndrome is characterized by the combination of a flaccid iris that billows in response to intraoperative irrigation currents, progressive intraoperative miosis despite preoperative dilation with standard mydriatic drugs, and potential prolapse of the iris toward the phacoemulsification incisions. The patient's ophthalmologist should be prepared for possible modifications to the surgical technique, such as the utilization of iris hooks, iris dilator rings, or viscoelastic substances. There does not appear to be a benefit of stopping alpha-1 blocker therapy prior to cataract surgery.

Dizziness or drowsiness may occur after the first dose of this medicine. Avoid driving or performing hazardous tasks for the first 24 hours after taking this medicine or when the dose is increased. Dizziness, lightheadedness, or fainting may occur, especially when rising from a lying or sitting position. Getting up slowly may help lessen the problem. These effects may also occur if you drink alcohol, stand for long periods of time, exercise, or if the weather is hot. While taking Minipress, be careful in the amount of alcohol you drink. Also, use extra care during exercise or hot weather, or if standing for long periods. Check with your physician if you have any questions.

Minipress has been administered without any adverse drug interaction in limited clinical experience to date with the following: (1) cardiac glycosides–digitalis and digoxin; (2) hypoglycemics–insulin, chlorpropamide, phenformin, tolazamide, and tolbutamide; (3) tranquilizers and sedatives–chlordiazepoxide, diazepam, and phenobarbital; (4) antigout–allopurinol, colchicine, and probenecid; (5) antiarrhythmics–procainamide, propranolol (see WARNINGS however), and quinidine; and (6) analgesics, antipyretics and anti-inflammatories–propoxyphene, aspirin, indomethacin, and phenylbutazone.

Addition of a diuretic or other antihypertensive agent to Minipress has been shown to cause an additive hypotensive effect. This effect can be minimized by reducing the Minipress dose to 1 to 2 mg three times a day, by introducing additional antihypertensive drugs cautiously, and then by retitrating Minipress based on clinical response.

In a study on five patients given from 12 to 24 mg of prazosin per day for 10 to 14 days, there was an average increase of 42% in the urinary metabolite of norepinephrine and an average increase in urinary VMA of 17%. Therefore, false positive results may occur in screening tests for pheochromocytoma in patients who are being treated with prazosin. If an elevated VMA is found, prazosin should be discontinued and the patient retested after a month.

In clinical studies in which lipid profiles were followed, there were generally no adverse changes noted between pre- and post-treatment lipid levels.

The use of prazosin and a beta-blocker for the control of severe hypertension in 44 pregnant women revealed no drug-related fetal abnormalities or adverse effects. Therapy with prazosin was continued for as long as 14 weeks.1

Prazosin has also been used alone or in combination with other hypotensive agents in severe hypertension of pregnancy by other investigators. No fetal or neonatal abnormalities have been reported with the use of prazosin.2

There are no adequate and well controlled studies which establish the safety of Minipress in pregnant women. Minipress should be used during pregnancy only if the potential benefit justifies the potential risk to the mother and fetus.

Minipress has been shown to be excreted in small amounts in human milk. Caution should be exercised when Minipress is administered to a nursing woman.

Clinical trials were conducted on more than 900 patients. During these trials and subsequent marketing experience, the most frequent reactions associated with Minipress therapy are: dizziness 10.3%, headache 7.8%, drowsiness 7.6%, lack of energy 6.9%, weakness 6.5%, palpitations 5.3%, and nausea 4.9%. In most instances, side effects have disappeared with continued therapy or have been tolerated with no decrease in dose of drug.

Less frequent adverse reactions which are reported to occur in 1–4% of patients are:

In addition, fewer than 1% of patients have reported the following (in some instances, exact causal relationships have not been established):

Single reports of pigmentary mottling and serous retinopathy, and a few reports of cataract development or disappearance have been reported. In these instances, the exact causal relationship has not been established because the baseline observations were frequently inadequate.

In more specific slit-lamp and funduscopic studies, which included adequate baseline examinations, no drug-related abnormal ophthalmological findings have been reported.

Literature reports exist associating Minipress therapy with a worsening of pre-existing narcolepsy. A causal relationship is uncertain in these cases.

In post-marketing experience, the following adverse events have been reported:

Accidental ingestion of at least 50 mg of Minipress in a two year old child resulted in profound drowsiness and depressed reflexes. No decrease in blood pressure was noted. Recovery was uneventful.

Should overdosage lead to hypotension, support of the cardiovascular system is of first importance. Restoration of blood pressure and normalization of heart rate may be accomplished by keeping the patient in the supine position. If this measure is inadequate, shock should first be treated with volume expanders. If necessary, vasopressors should then be used. Renal function should be monitored and supported as needed. Laboratory data indicate Minipress is not dialysable because it is protein bound.

The dose of Minipress should be adjusted according to the patient's individual blood pressure response. The following is a guide to its administration:

Use With Other Drugs

When adding a diuretic or other antihypertensive agent, the dose of Minipress should be reduced to 1 mg or 2 mg three times a day and retitration then carried out.

Concomitant administration of Minipress with a PDE-5 inhibitor can result in additive blood pressure lowering effects and symptomatic hypotension; therefore, PDE-5 inhibitor therapy should be initiated at the lowest dose in patients taking Minipress.

How is Minipress Supplied 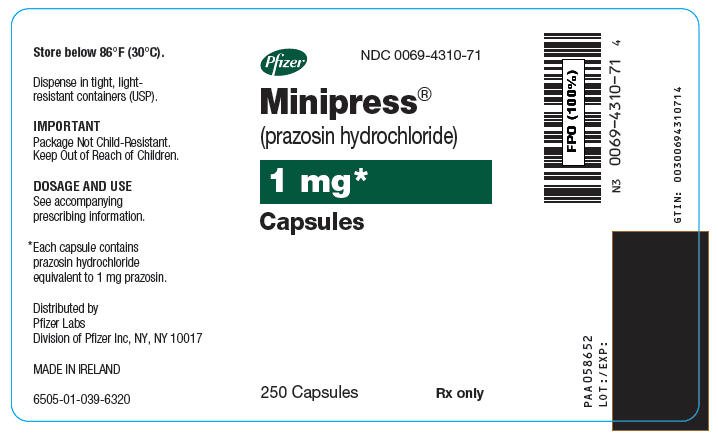 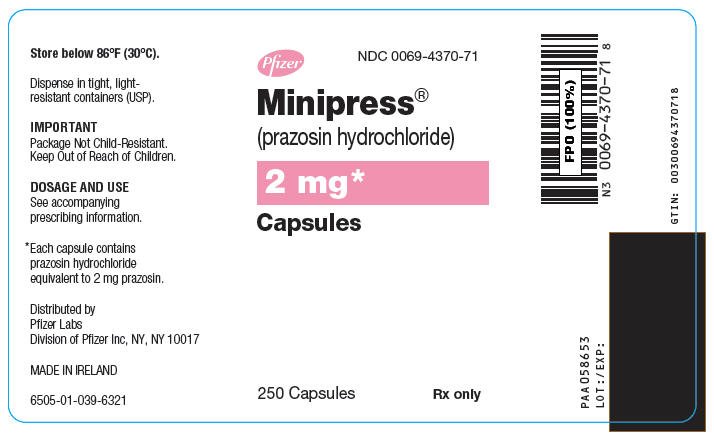 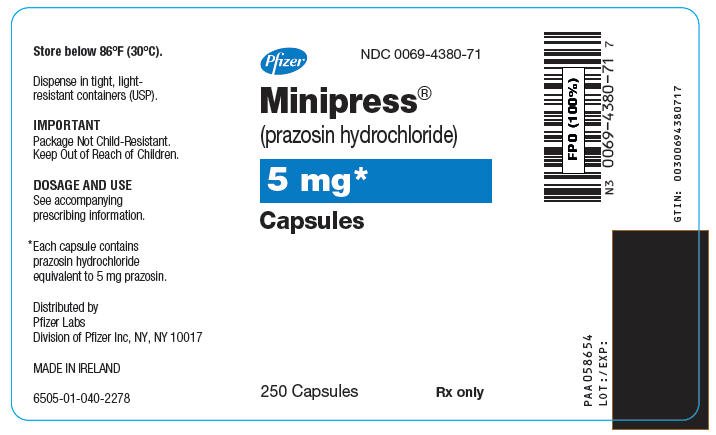 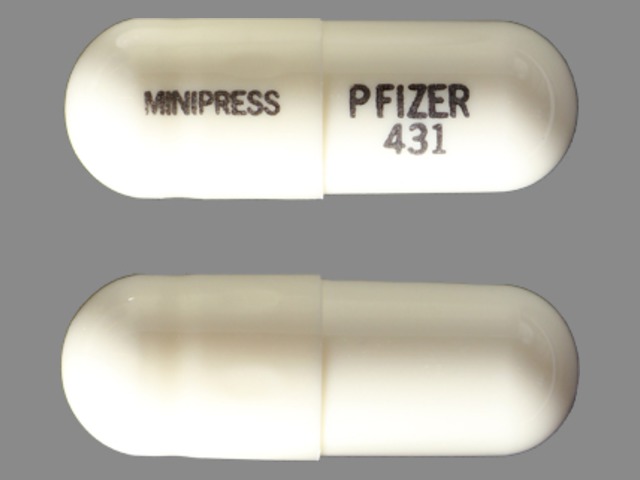