Serious and/or life-threatening peripheral ischemia has been associated with the coadministration of ergotamine tartrate and caffeine with potent CYP 3A4 inhibitors including protease inhibitors and macrolide antibiotics. Because CYP 3A4 inhibition elevates the serum levels of ergotamine tartrate and caffeine, the risk for vasospasm leading to cerebral ischemia and/or ischemia of the extremities is increased. Hence, concomitant use of these medications is contraindicated. (See also CONTRAINDICATIONS and WARNINGS section)

Ergotamine Tartrate and Caffeine Suppositories are for rectal administration only.

Ergotamine Tartrate and Caffeine Suppositories are sealed in foil to afford protection from leakage. If an unavoidable period of exposure to heat softens the suppository, it should be chilled in ice-cold water to solidify it before removing the foil.

Ergotamine is an alpha adrenergic blocking agent with a direct stimulating effect on the smooth muscle of peripheral and cranial blood vessels and produces depression of central vasomotor centers. The compound also has the properties of serotonin antagonism. In comparison to hydrogenated ergotamine, the adrenergic blocking actions are less pronounced and vasoconstrictive actions are greater.

Caffeine, also a cranial vasoconstrictor, is added to further enhance the vasoconstrictive effect without the necessity of increasing ergotamine dosage.

Many migraine patients experience excessive nausea and vomiting during attacks, making it impossible for them to retain any oral medication. In such cases, therefore, the only practical means of medication is through the rectal route where medication may reach the cranial vessels directly, evading the splanchnic vasculature and the liver.

Pharmacokinetic interactions (increased blood levels of ergotamine) have been reported in patients treated orally with ergotamine and macrolide antibiotics (e.g., troleandomycin, clarithromycin, erythromycin), and in patients treated orally with ergotamine and protease inhibitors (e.g. ritonavir) presumably due to inhibition of cytochrome P450 3A metabolism of ergotamine (See CONTRAINDICATIONS). Ergotamine has also been shown to be an inhibitor of cytochrome P450 3A catalyzed reactions. No pharmacokinetic interactions involving other cytochrome P450 isoenzymes are known.

Indications and Usage for Migergot Suppository

Coadministration of ergotamine with potent CYP 3A4 inhibitors (ritonavir, nelfinavir, indinavir, erythromycin, clarithromycin, and troleandomycin) has been associated with acute ergot toxicity (ergotism) characterized by vasospasm and ischemia of the extremities (see PRECAUTIONS: Drug Interactions), with some cases resulting in amputation. There have been rare reports of cerebral ischemia in patients on protease inhibitor therapy when ergotamine tartrate and caffeine was coadministered, at least one resulting in death. Because of the increased risk for ergotism and other serious vasospastic adverse events, ergotamine use is contraindicated with these drugs and other potent inhibitors of CYP 3A4 (e.g., ketoconazole, itraconazole) (see WARNINGS: CYP 3A4 Inhibitors).

Ergotamine tartrate and caffeine may cause fetal harm when administered to pregnant women. Ergotamine tartrate and caffeine is contraindicated in women who are or may become pregnant. If this drug is used during pregnancy or if the patient becomes pregnant while taking this product, the patient should be apprised of the potential hazard to the fetus.

Hypersensitivity to any of the components.

Although signs and symptoms of ergotism rarely develop even after long term intermittent use of the rectally administered drug, care should be exercised to remain within the limits of recommended dosage.

Ergotism is manifested by intense arterial vasoconstriction, producing signs and symptoms of peripheral vascular ischemia. Ergotamine induces vasoconstriction by a direct action on vascular smooth muscle. In chronic intoxication with ergot derivatives, headache, intermittent claudication, muscle pains, numbness, coldness and pallor of the digits may occur. If the condition is allowed to progress untreated, gangrene can result.

While most cases of ergotism associated with ergotamine treatment result from frank overdosage, some cases have involved apparent hypersensitivity. There are few reports of ergotism among patients taking doses within the recommended limits or for brief periods of time. In rare instances, patients, particularly those who have used the medication indiscriminately over long periods of time, may display withdrawal symptoms consisting of rebound headache upon discontinuation of the drug.

Patients should be advised that one suppository of ergotamine tartrate and caffeine should be taken at the first sign of a migraine headache. No more than 2 suppositories should be taken for any single migraine attack. No more than 5 suppositories should be taken during any 7-day period. Administration of Ergotamine Tartrate and Caffeine Suppositories should not exceed the dosing guidelines and should not be used for chronic daily administration (see DOSAGE AND ADMINISTRATION). Ergotamine tartrate and caffeine should be used only for migraine headaches. It is not effective for other types of headaches and it lacks analgesic properties. Patients should be advised to report to the physician immediately any of the following: numbness or tingling in the fingers or toes, muscle pain in the arms and legs, weakness in the legs, pain in the chest or temporary speeding or slowing of the heart rate, swelling or itching.

Ergotamine tartrate and caffeine should not be administered with other vasoconstrictors. Use with sympathomimetics (pressor agents) may cause extreme elevation of blood pressure. The beta-blocker Inderal (propranolol) has been reported to potentiate the vasoconstrictive action of ergotamine tartrate and caffeine by blocking the vasodilating property of epinephrine. Nicotine may provoke vasoconstriction in some patients, predisposing to a greater ischemic response to ergot therapy.

There are no studies on the placental transfer or teratogenicity of the combined products of ergotamine tartrate and caffeine. Caffeine is known to cross the placenta and has been shown to be teratogenic in animals. Ergotamine crosses the placenta in small amounts, although it does not appear to be embryotoxic in this quantity. However, prolonged vasoconstriction of the uterine vessels and/or increased myometrial tone leading to reduced myometrial and placental blood flow may have contributed to fetal growth retardation observed in animals. (See CONTRAINDICATIONS)

Ergotamine tartrate and caffeine is contraindicated in pregnancy due to the oxytocic effects of ergotamine. (See CONTRAINDICATIONS)

Ergotamine tartrate and caffeine is contraindicated in labor and delivery due to its oxytocic effect which is maximal in the third trimester. (See CONTRAINDICATIONS)

Ergot drugs are known to inhibit prolactin but there are no reports of decreased lactation with ergotamine tartrate and caffeine. Ergotamine is excreted in breast milk and may cause symptoms of vomiting, diarrhea, weak pulse and unstable blood pressure in nursing infants. Because of the potential for serious adverse reactions in nursing infants from ergotamine tartrate and caffeine, a decision should be made whether to discontinue nursing or discontinue the drug, taking into account the importance of the drug to the mother.

Cardiovascular: Vasoconstrictive complications of a serious nature may occur at times. These include ischemia, cyanosis, absence of pulse, cold extremities, gangrene, precordial distress and pain, EKG changes and muscle pains. Although these effects occur most commonly with long-term therapy at relatively high doses, they have also been reported with short-term or normal doses. Other cardiovascular adverse effects include transient tachycardia or bradycardia and hypertension.

There have been reports of drug abuse and psychological dependence in patients on ergotamine tartrate and caffeine therapy. Due to the chronicity of vascular headaches, it is imperative that patients be advised not to exceed recommended dosages with long-term use to avoid ergotism. (See PRECAUTIONS)

The toxic effects of an acute overdosage of ergotamine tartrate and caffeine are due primarily to the ergotamine component. The amount of caffeine is such that its toxic effects will be overshadowed by those of ergotamine. Symptoms include vomiting, numbness, tingling, pain and cyanosis of the extremities associated with diminished or absent peripheral pulses; hypertension or hypotension; drowsiness, stupor, coma, convulsions and shock. A case has been reported of reversible bilateral papillitis with ring scotomata in a patient who received five times the recommended daily adult dose over a period of 14 days.

Treatment consists of removal of the offending drug by enema. Maintenance of adequate pulmonary ventilation, correction of hypotension, and control of convulsions and blood pressure are important considerations. Treatment of peripheral vasospasm should consist of warmth, but not heat, and protection of the ischemic limbs. Vasodilators may be beneficial but caution must be exercised to avoid aggravating an already existent hypotension.

For best results, dosage should start at the first sign of an attack.

Two suppositories is the maximum dose for an individual attack.

Total weekly dosage should not exceed 5 suppositories. Ergotamine Tartrate and Caffeine Suppositories should not be used for chronic daily administration.

In carefully selected patients, with due consideration of maximum dosage recommendations, administration of the drug at bedtime may be an appropriate short-term preventive measure. 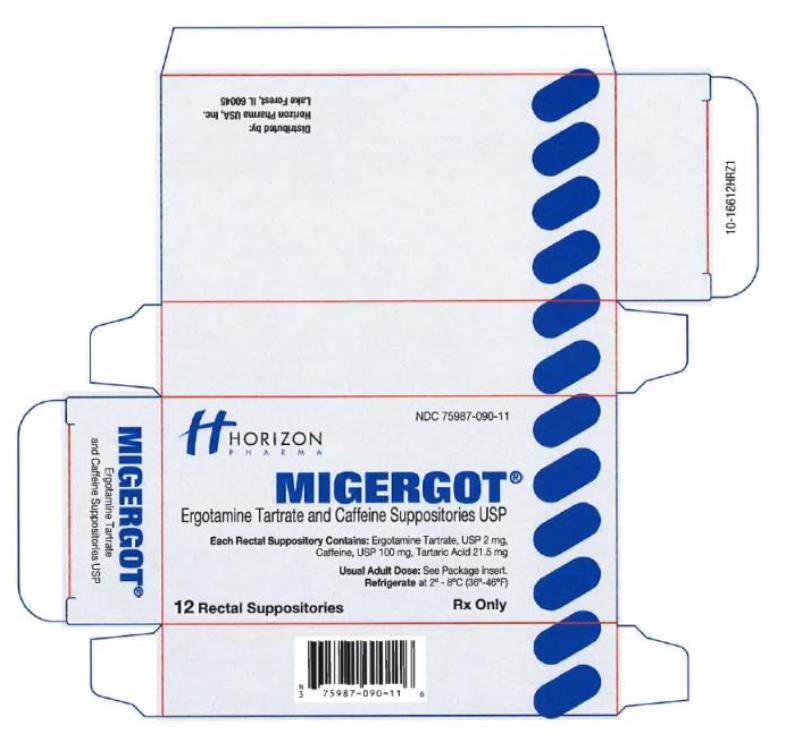