Indications and Usage for Ivermectin Cream

Ivermectin Cream is indicated for the treatment of inflammatory lesions of rosacea.

Apply to the affected areas of the face once daily. Use a pea-size amount for each area of the face (forehead, chin, nose, each cheek) that is affected. Spread as a thin layer, avoiding the eyes and lips.
Ivermectin Cream is not for oral, ophthalmic, or intravaginal use.

Because adverse reactions are reported voluntarily from a population of uncertain size, it is not always possible to reliably estimate their frequency or establish a causal relationship to drug exposure.
Postmarketing reports for local adverse reactions to Ivermectin Cream included: contact dermatitis and allergic dermatitis.

In vitro studies have shown that Ivermectin Cream, at therapeutic concentrations, neither inhibits nor induces cytochrome P450 (CYP450) enzymes.

Pregnancy Category C.
There are no adequate and well-controlled studies in pregnant women. Ivermectin Cream should be used during pregnancy only if the potential benefit justifies the potential risk to the fetus.
Note: The animal multiples of human exposure calculations were based on AUC comparisons. The maximum topical human dose (MTHD) of Ivermectin Cream is 1 g applied once daily.

A pre- and postnatal development study was conducted in rats. Oral doses of 1, 2 and 4 mg/kg/day ivermectin were administered to pregnant female rats during gestational days 6-20 and lactation days 2-20. Neonatal death occurred at doses >2 mg/kg/day. Behavior development of newborn rats was adversely affected at all doses.

Following oral administration, ivermectin is excreted in human milk in low concentrations. Excretion in human milk following topical administration has not been evaluated. In oral studies in rats, ivermectin was excreted in the milk of nursing mothers and neonatal toxicity was observed in the litters. The blood-brain barrier in neonatal rats may not be fully developed at birth. Because of the potential for serious adverse reactions from Ivermectin Cream in nursing infants, a decision should be made whether to discontinue nursing or to discontinue the drug, taking into account the importance of the drug to the mother.

Safety and effectiveness of Ivermectin Cream in pediatric patients have not been established.

Of the 1371 subjects in the two pivotal clinical studies of Ivermectin Cream, 170 (12.4%) were 65 and over, while 37 (2.7%) were 75 and over. No overall differences in safety or effectiveness were observed between these subjects and younger subjects, and other reported clinical experience has not identified differences in responses between the elderly and younger patients, but greater sensitivity of some older individuals cannot be ruled out.

In accidental or significant exposure to unknown quantities of veterinary formulations of ivermectin in humans, either by ingestion, inhalation, injection, or exposure to body surfaces, the following adverse effects have been reported most frequently: rash, edema, headache, dizziness, asthenia, nausea, vomiting, and diarrhea. Other adverse effects that have been reported include: seizure, ataxia, dyspnea, abdominal pain, paresthesia, urticaria, and contact dermatitis.

In case of accidental ingestion, supportive therapy, if indicated, should include parenteral fluids and electrolytes, respiratory support (oxygen and mechanical ventilation if necessary) and pressor agents if clinically significant hypotension is present. Induction of emesis and/or gastric lavage as soon as possible, followed by purgatives and other routine anti-poison measures, may be indicated if needed to prevent absorption of ingested material.

Ivermectin Cream, 1% is a white to pale yellow hydrophilic cream. Each gram of Ivermectin Cream contains 10 mg of ivermectin. It is intended for topical use.

Ivermectin is a semi-synthetic derivative isolated from the fermentation of Streptomyces avermitilis that belongs to the avermectin family of macrocyclic lactones.

The structural formulas are: 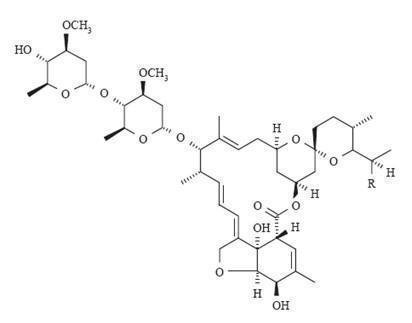 The mechanism of action of Ivermectin Cream in treating rosacea lesions is unknown.

Absorption
The absorption of ivermectin from Ivermectin Cream was evaluated in a clinical trial in 15 adult male and female subjects with severe papulopustular rosacea applying 1 g Ivermectin Cream, 1% once daily. At steady state (after 2 weeks of treatment), the highest mean ± standard deviation plasma concentrations of ivermectin peaked (Tmax) at 10 ± 8 hours post dose, the maximum concentration (Cmax) was 2.10 ± 1.04 ng/mL (range: 0.69 - 4.02 ng/mL) and the area under the concentration curve (AUC0-24hr) was 36.14 ± 15.56 ng.hr/mL (range: 13.69-75.16 ng.hr/mL). In addition, systemic exposure assessment in longer treatment duration (Phase 3 studies) showed that there was no plasma accumulation of ivermectin over the 52-week treatment period.

Distribution
An in vitro study demonstrated that ivermectin is greater than 99% bound to plasma proteins and is bound primarily to human serum albumin. No significant binding of ivermectin to erythrocytes was observed.

In a 2-year dermal mouse carcinogenicity study, ivermectin was administered to CD-1 mice at topical doses of 1, 3, and 10 mg/kg/day (0.1%, 0.3% and 1% Ivermectin Cream applied at 2 ml/kg/day). No drug-related tumors were noted in this study up to the highest dose evaluated in this study of 10 mg/kg/day (747X maximum topical human dose [MTHD]).

In a 2-year oral rat carcinogenicity study, ivermectin was administered to Wistar rats at gavage doses of 1, 3, and 9 mg/kg/day. A statistically significant increase in the incidence of hepatocellular adenoma was noted in males treated with 9 mg/kg/day (1766X MTHD) ivermectin. The clinical relevance of this finding is unknown. No drug-related tumors were noted in females up to the highest dose evaluated in this study of 9 mg/kg/day (1959X MTHD). No drug-related tumors were noted in males at doses ≤ 3 mg/kg/day (599X MTHD).

Ivermectin revealed no evidence of genotoxic potential based on the results of two in vitro genotoxicity tests (the Ames test and the L5178Y/TK+/- mouse lymphoma assay) and one in vivo genotoxicity test (rat micronucleus assay).

In a fertility study, oral doses of 0.1, 1 and 9 mg/kg/day ivermectin were administered to male and female rats. Mortality occurred at 9 mg/kg/day (1027X MTHD). The precoital period was generally prolonged at 9 mg/kg/day.
No treatment-related effects on fertility or mating performance were noted at doses ≤ 1 mg/kg/day (68X MTHD).

Ivermectin Cream applied once daily at bedtime was evaluated in the treatment of inflammatory lesions of rosacea in two randomized, double-blind, vehicle controlled clinical trials, which were identical in design. The trials were conducted in 1371 subjects aged 18 years and older who were treated once daily for 12 weeks with either Ivermectin Cream or vehicle cream.

The co-primary efficacy endpoints in both pivotal trials were the success rate based on the IGA outcome (percentage of subjects “clear” and “almost clear”) and absolute change from baseline in inflammatory lesion counts at Week 12.

Figures 3 and 4: Mean Absolute Change in Inflammatory Lesion Counts from Baseline Over Time

Ivermectin Cream, 1% is a white to pale yellow cream, supplied in a laminated tube with a child resistant cap in the following size:
45 gram NDC 0574-2107-45

Advise the patient to read the FDA-approved patient labeling (Instructions for Use).

Made in Canada
Distributed by:
Perrigo
Allegan, MI 49010
www.perrigorx.com

Instructions for Use
Ivermectin Cream, 1%

Read and follow the steps below so that you use Ivermectin Cream correctly:

1. Open the tube of Ivermectin Cream by gently pressing down on the child resistant cap and twist in the direction of the arrow (counterclockwise) as shown below. See Figures A and B. To avoid spilling, do not squeeze the tube while opening or closing. 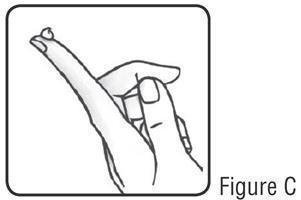 3. Apply ivermectin to the affected areas of your face once a day. Use a pea-sized amount of Ivermectin Cream for each area of your face (forehead, chin, nose, each cheek) that is affected. Spread the cream smoothly and evenly in a thin layer. Avoid contact with your eyes and lips.

4. To close Ivermectin Cream, gently press down on the child resistant cap and twist to the right (clockwise). See Figure D. 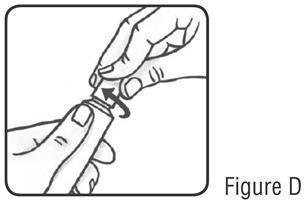 Keep Ivermectin Cream out of the reach of children.

This Instructions for Use has been approved by the U.S. Food and Drug Administration.

Made in Canada
Distributed by:
Perrigo
Allegan, MI 49010
www.perrigorx.com 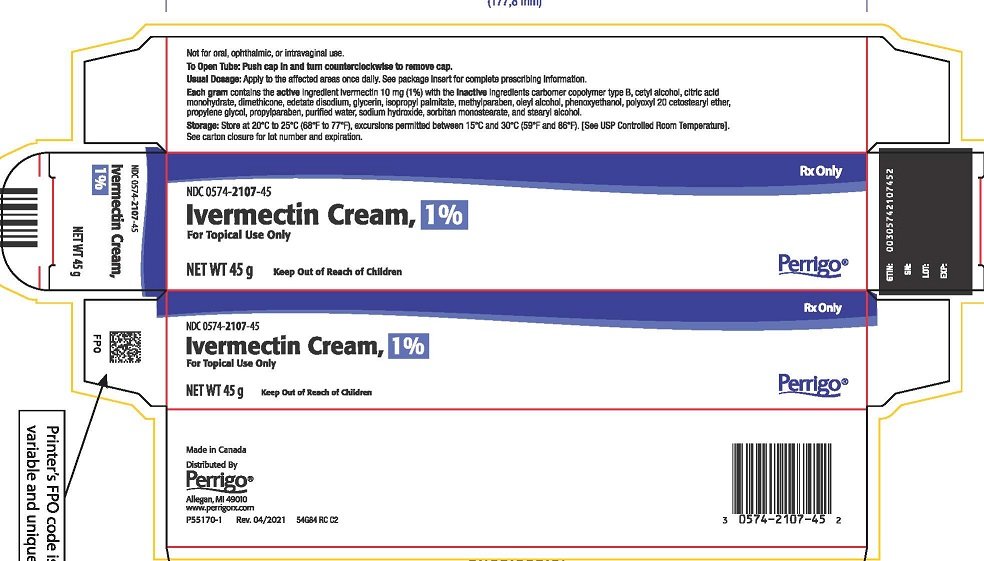 Ivermectin Cream, 1%
For Topical Use Only

Keep Out of Reach of Children