For Dermatologic Use Only

Ery 2% Pads contain erythromycin, USP for topical dermatologic use. Erythromycin is a macrolide antibiotic produced from a strain of Saccaropolyspora erythraea (formerly Streptomyces erythreus). It is a base and readily forms salts with acids. 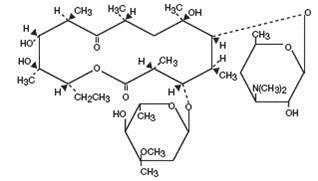 Erythromycin has the molecular weight of 733.94. It is a white or slightly yellow, crystalline powder, slightly soluble in water, soluble in alcohol, in chloroform, and in ether. It is odorless or practically odorless. It has a pH range between 8.0 and 10.5 in a methanol and water solution prepared by diluting 1 volume of a methanol solution, containing 40 mg per mL, with 19 volumes of water.

Each mL of expressible liquid contains 20 mg erythromycin in a base of dehydrated alcohol, propylene glycol and citric acid to adjust pH. Each pledget is filled to contain 0.8 mL of Erythromycin Topical Solution 2%.

Indications and Usage for Ery Pads

Ery 2% Pads are indicated for the topical treatment of acne vulgaris.

Ery 2% Pads are contraindicated in those individuals who have shown hypersensitivity to any of its components.

For topical use only; not for ophthalmic use. Concomitant topical acne therapy should be used with caution because a possible cumulative irritancy effect may occur, especially with the use of peeling, desquamating, or abrasive agents.

1. This medication is to be used as directed by the physician. It is for external use only. Avoid contact with the eyes, nose, mouth, and all mucous membranes.

2. This medication should not be used for any disorder other than that for which it was prescribed.

3. Patients should not use any other topical acne medication unless otherwise directed by their physician.

4. Patients should report to their physician any signs of local adverse reactions.

There are, however, no adequate and well-controlled studies in pregnant women. Because animal reproduction studies are not always predictive of human response, this drug should be used in pregnancy only if clearly needed. Erythromycin has been reported to cross the placental barrier in humans, but fetal plasma levels are generally low.

Safety and effectiveness of this product in pediatric patients have not been established.

The Ery 2% Pads should be rubbed over the affected area twice a day (morning and evening) after skin is thoroughly washed with warm water and soap and patted dry. Acne lesions on the face, neck, shoulders, chest, and back may be treated in this manner. Additional pledgets may be used, if needed. Each pledget should be used once and discarded. Wash hands after application. Close jar tightly after each use. Drying and peeling may be controlled by reducing the frequency of applications.

How is Ery Pads Supplied

Ery 2% Pads are available as follows:

Each pledget is filled to contain 0.8 mL of Erythromycin Topical Solution 2%.