NOT FOR USE IN NEONATES
CONTAINS BENZYL ALCOHOL
Rx only

Doxapram Injection is a respiratory stimulant. 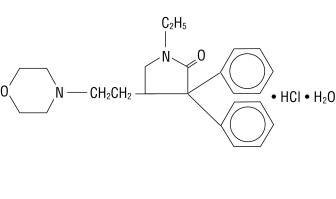 Doxapram hydrochloride produces respiratory stimulation mediated through the peripheral carotid chemoreceptors. As the dosage level is increased, the central respiratory centers in the medulla are stimulated with progressive stimulation of other parts of the brain and spinal cord.

The onset of respiratory stimulation following the recommended single intravenous injection of doxapram hydrochloride usually occurs in 20 to 40 seconds with peak effect at 1 to 2 minutes. The duration of effect may vary from 5 to 12 minutes.

A pressor response may result following doxapram administration. Provided there is no impairment of cardiac function, the pressor effect is more marked in hypovolemic than in normovolemic states. The pressor response is due to the improved cardiac output rather than peripheral vasoconstriction. Following doxapram administration, an increased release of catecholamines has been noted.

Although opiate-induced respiratory depression is antagonized by doxapram, the analgesic effect is not affected.

Doxapram is metabolized via ring hydroxylation to ketodoxapram, an active metabolite readily detected in the plasma.

Indications and Usage for Dopram

Exercising care to prevent vomiting and aspiration, doxapram may be used to stimulate respiration, hasten arousal, and to encourage the return of laryngopharyngeal reflexes in patients with mild to moderate respiratory and CNS depression due to drug overdosage.

Doxapram is indicated as a temporary measure in hospitalized patients with acute respiratory insufficiency superimposed on chronic obstructive pulmonary disease. Its use should be for a short period of time (see DOSAGE AND ADMINISTRATION) as an aid in the prevention of elevation of arterial CO2 tension during the administration of oxygen.

It should not be used in conjunction with mechanical ventilation.

Doxapram is contraindicated in patients with known hypersensitivity to the drug or any of the injection components.

Doxapram should not be used in patients with epilepsy or other convulsive disorders.

Doxapram is contraindicated in patients with proven or suspected pulmonary embolism.

Doxapram is contraindicated in patients with mechanical disorders of ventilation such as mechanical obstruction, muscle paresis (including neuromuscular blockade), flail chest, pneumothorax, acute bronchial asthma, pulmonary fibrosis, or other conditions resulting in restriction of the chest wall, muscles of respiration, or alveolar expansion.

Doxapram is contraindicated in patients with evidence of head injury, cerebral vascular accident, or cerebral edema, and in those with significant cardiovascular impairment, uncompensated heart failure, severe coronary artery disease, or severe hypertension, including that associated with hyperthyroidism or pheochromocytoma. (See WARNINGS.)

Doxapram should not be used in conjunction with mechanical ventilation.

In Drug-Induced CNS and Respiratory Depression

Doxapram alone may not stimulate adequate spontaneous breathing or provide sufficient arousal in patients who are severely depressed either due to respiratory failure or to CNS depressant drugs, but may be used as an adjunct to established supportive measures and resuscitative techniques.

Because of the associated increased work of breathing, do not increase the rate of infusion of doxapram in severely ill patients in an attempt to lower pCO2.

Administration of doxapram to patients who are receiving sympathomimetic or monoamine oxidase inhibiting drugs may result in an additive pressor effect (see PRECAUTIONS, General).

In patients who have received neuromuscular blocking agents, doxapram may temporarily mask the residual effects of these drugs.

In patients who have received general anesthesia utilizing a volatile agent known to sensitize the myocardium to catecholamines, administration of doxapram should be delayed until the volatile agent has been excreted in order to lessen the potential for arrhythmias, including ventricular tachycardia and ventricular fibrillation (see WARNINGS).

No carcinogenic or mutagenic studies have been performed using doxapram. Doxapram did not adversely affect the breeding performance of rats.

Reproduction studies have been performed in rats at doses up to 1.6 times the human dose and have revealed no evidence of impaired fertility or harm to the fetus due to doxapram. There are, however, no adequate and well-controlled studies in pregnant women. Because the animals in the reproduction studies were dosed by the IM and oral routes and animal reproduction studies, in general, are not always predictive of human response, this drug should be used during pregnancy only if clearly needed.

Safety and effectiveness in pediatric patients below the age of 12 years have not been established. This product contains benzyl alcohol as a preservative. Benzyl alcohol, a component of this product, has been associated with serious adverse events and death, particularly in pediatric patients. The “gasping syndrome”, (characterized by central nervous system depression, metabolic acidosis, gasping respirations, and high levels of benzyl alcohol and its metabolites found in the blood and urine) has been associated with benzyl alcohol dosages >99 mg/kg/day in neonates and low-birth-weight neonates. Additional symptoms may include gradual neurological deterioration, seizures, intracranial hemorrhage, hematologic abnormalities, skin breakdown, hepatic and renal failure, hypotension, bradycardia, and cardiovascular collapse. Although normal therapeutic doses of this product deliver amounts of benzyl alcohol that are substantially lower than those reported in association with the “gasping syndrome”, the minimum amount of benzyl alcohol at which toxicity may occur is not known. Premature and low-birth-weight infants, as well as patients receiving high dosages, may be more likely to develop toxicity. Practitioners administering this and other medications containing benzyl alcohol should consider the combined daily metabolic load of benzyl alcohol from all sources.

Adverse reactions reported coincident with the administration of Dopram (doxapram hydrochloride, USP) include:

Phlebitis, variations in heart rate, lowered T-waves, arrhythmias (including ventricular tachycardia and ventricular fibrillation), chest pain, tightness in chest. A mild to moderate increase in blood pressure is commonly noted and may be of concern in patients with severe cardiovascular diseases.

Hemolysis with rapid infusion. A decrease in hemoglobin, hematocrit, or red blood cell count has been observed in postoperative patients. In the presence of pre-existing leukopenia, a further decrease in WBC has been observed following anesthesia and treatment with doxapram hydrochloride.

Symptoms of overdosage are extensions of the pharmacologic effects of the drug. Excessive pressor effect, such as hypertension, tachycardia, skeletal muscle hyperactivity, and enhanced deep tendon reflexes may be early signs of overdosage. Therefore, the blood pressure, pulse rate, and deep tendon reflexes should be evaluated periodically and the dosage or infusion rate adjusted accordingly.

Other effects may include agitation, confusion, sweating, cough, and dyspnea.

Convulsive seizures are unlikely at recommended dosages. In unanesthetized animals, the convulsant dose is 70 times greater than the respiratory stimulant dose. Intravenous LD50 values in the mouse and rat were approximately 75 mg/kg and in the cat and dog were 40 to 80 mg/kg.

Except for management of chronic obstructive pulmonary disease associated with acute hypercapnia, the maximum recommended dosage is 3 GRAMS/24 HOURS. (See DOSAGE AND ADMINISTRATION.)

There is no specific antidote for doxapram. Management should be symptomatic. Anticonvulsants, along with oxygen and resuscitative equipment should be readily available to manage overdosage manifested by excessive central nervous system stimulation. Slow administration of the drug and careful observation of the patient during administration and for some time subsequently are advisable. These precautions are to assure that the protective reflexes have been restored and to prevent possible post-hyperventilation or hypoventilation.

There is no evidence that doxapram is dialyzable; further, the half-life of doxapram makes it unlikely that dialysis would be appropriate in managing overdose with this drug.

The recommended dose for I.V. administration is 0.5 – 1 mg/kg for a single injection and at 5-minute intervals. Careful observation of the patient during administration and for some time subsequently are advisable. The maximum total dosage by I.V. injection is 2 mg/kg.

The solution is prepared by adding 250 mg of doxapram (12.5 mL) to 250 mL of dextrose 5% or 10% in water or normal saline solution. The infusion is initiated at a rate of approximately 5 mg/minute until a satisfactory respiratory response is observed, and maintained at a rate of 1 to 3 mg/minute. The rate of infusion should be adjusted to sustain the desired level of respiratory stimulation with a minimum of side effects. The maximum total dosage by infusion is 4 mg/kg, or approximately 300 mg for the average adult.

In the Management of Drug-Induced CNS Depression

Doxapram hydrochloride is compatible with 5% and 10% dextrose in water or normal saline.

ADMIXTURE OF DOXAPRAM WITH ALKALINE SOLUTIONS SUCH AS 2.5% THIOPENTAL SODIUM, SODIUM BICARBONATE, FUROSEMIDE, OR AMINOPHYLLINE WILL RESULT IN PRECIPITATION OR GAS FORMATION.

How is Dopram Supplied