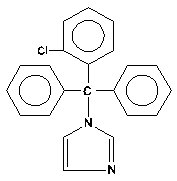 Clotrimazole is a broad-spectrum antifungal agent that inhibits the growth of pathogenic yeasts by altering the permeability of cell membranes. The action of clotrimazole is fungistatic at concentrations of drug up to 20 mcg/mL and may be fungicidal in vitro against Candida albicans and other species of the genus Candida at higher concentrations. No single-step or multiple-step resistance to clotrimazole has developed during successive passages of Candida albicans in the laboratory; however, individual organism tolerance has been observed during successive passages in the laboratory. Such in vitro tolerance has resolved once the organism has been removed from the antifungal environment.

After oral administration of a 10 mg clotrimazole troche to healthy volunteers, concentrations sufficient to inhibit most species of Candida persist in saliva for up to three hours following the approximately 30 minutes needed for a troche to dissolve. The long term persistence of drug in saliva appears to be related to the slow release of clotrimazole from the oral mucosa to which the drug is apparently bound. Repetitive dosing at three hour intervals maintains salivary levels above the minimum inhibitory concentrations of most strains of Candida; however, the relationship between in vitro susceptibility of pathogenic fungi to clotrimazole and prophylaxis or cure of infections in humans has not been established.

In another study, the mean serum concentrations were 4.98 ± 3.7 and 3.23 ± 1.4 nanograms/mL of clotrimazole at 30 and 60 minutes, respectively, after administration as a troche.

Indications and Usage for Clotrimazole Lozenge

Clotrimazole is indicated for the local treatment of oropharyngeal candidiasis. The diagnosis should be confirmed by a KOH smear and/or culture prior to treatment.

Clotrimazole is also indicated prophylactically to reduce the incidence of oropharyngeal candidiasis in patients immunocompromised by conditions that include chemotherapy, radiotherapy, or steroid therapy utilized in the treatment of leukemia, solid tumors, or renal transplantation. There are no data from adequate and well-controlled trials to establish the safety and efficacy of this product for prophylactic use in patients immunocompromised by etiologies other than those listed in the previous sentence. (See DOSAGE AND ADMINISTRATION.)

Clotrimazole is contraindicated in patients who are hypersensitive to any of its components.

Clotrimazole is not indicated for the treatment of systemic mycoses including systemic candidiasis.

Abnormal liver function tests have been reported in patients treated with clotrimazole troches; elevated SGOT levels were reported in about 15% of patients in the clinical trials. In most cases the elevations were minimal and it was often impossible to distinguish effects of clotrimazole from those of other therapy and the underlying disease (malignancy in most cases). Periodic assessment of hepatic function is advisable particularly in patients with pre-existing hepatic impairment.

Since patients must be instructed to allow each troche to dissolve slowly in the mouth in order to achieve maximum effect of the medication, they must be of such an age and physical and/or mental condition to comprehend such instructions.

An 18 month dosing study with clotrimazole in rats has not revealed any carcinogenic effect.

There are no adequate and well controlled studies in pregnant women. Clotrimazole troches should be used during pregnancy only if the potential benefit justifies the potential risk to the fetus.

Safety and effectiveness of clotrimazole in children below the age of 3 years have not been established; therefore, its use in such patients is not recommended.

The safety and efficacy of the prophylactic use of clotrimazole troches in children have not been established.

Clinical studies of clotrimazole did not include sufficient numbers of subjects aged 65 and over to determine whether they respond differently from younger subjects. Other reported clinical experience has not identified differences in responses between the elderly and younger patients.

Abnormal liver function tests have been reported in patients treated with clotrimazole troches; elevated SGOT levels were reported in about 15% of patients in the clinical trials (See PRECAUTIONS).

Nausea, vomiting, unpleasant mouth sensations and pruritus have also been reported with the use of the troche.

Clotrimazole is administered only as a lozenge that must be slowly dissolved in the mouth. The recommended dose is one troche five times a day for fourteen consecutive days. Only limited data are available on the safety and effectiveness of the clotrimazole troche after prolonged administration; therefore, therapy should be limited to short term use, if possible.

For prophylaxis to reduce the incidence of oropharyngeal candidiasis in patients immunocompromised by conditions that include chemotherapy, radiotherapy, or steroid therapy utilized in the treatment of leukemia, solid tumors, or renal transplantation, the recommended dose is one troche three times daily for the duration of chemotherapy or until steroids are reduced to maintenance levels.

How is Clotrimazole Lozenge Supplied

10 mg troche is supplied as white, round, flat face beveled edge troche with product identification “54 552” on one side and plain on the other side. 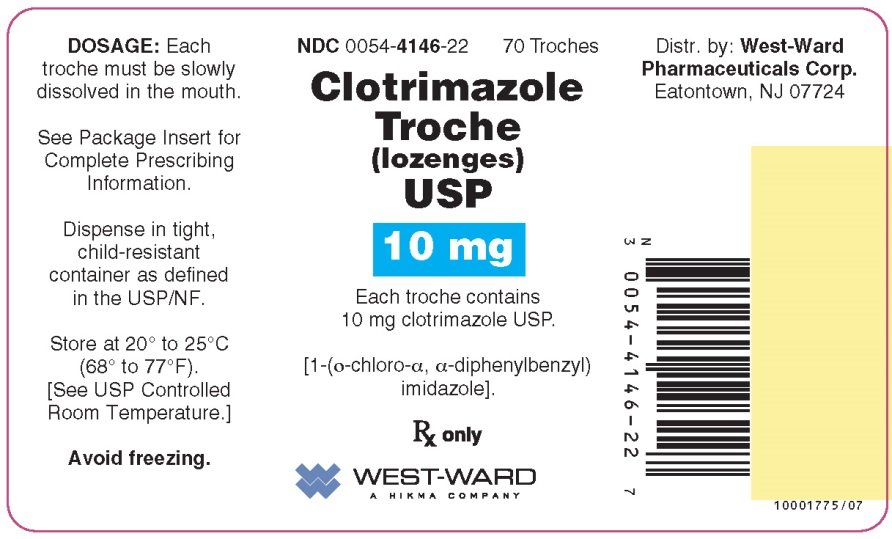 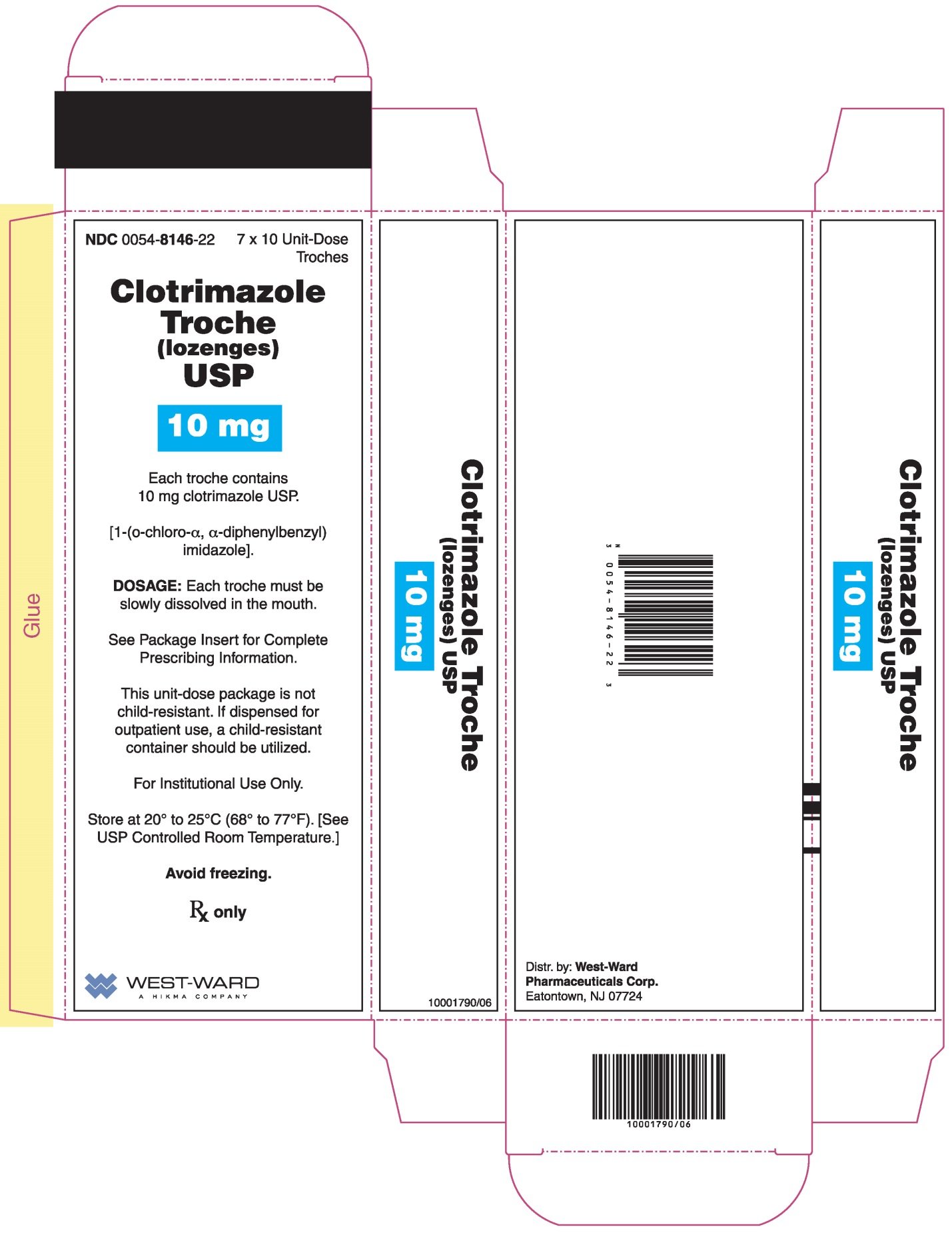 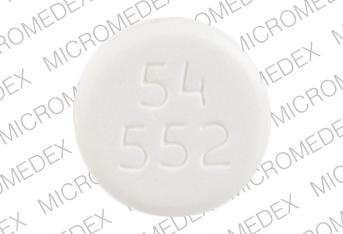