Ciloxan® (ciprofloxacin ophthalmic ointment) 0.3% is a synthetic, sterile, multiple dose, antimicrobial for topical use. Ciprofloxacin is a fluoroquinolone antibacterial. It is available as the monohydrochloride monohydrate salt of 1-cyclopropyl-6-fluoro-1,4-dihydro-4-oxo-7-(1-piperazinyl)-3-quinolinecarboxylic acid. Ciprofloxacin is a faint to light yellow crystalline powder with a molecular weight of 385.82. Its empirical formula is C17H18FN3O3•HCl•H2O and its chemical structure is as follows: 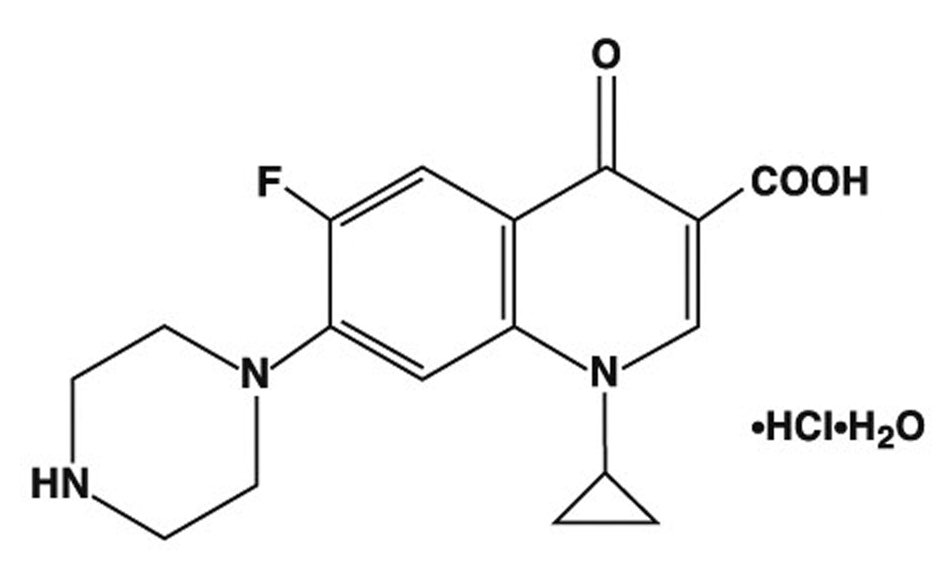 Ciprofloxacin differs from other quinolones in that it has a fluorine atom at the 6-position, a piperazine moiety at the 7-position, and a cyclopropyl ring at the 1-position.

Systemic Absorption: Absorption studies in humans with the ciprofloxacin ointment have not been conducted, however, based on studies with ciprofloxacin solution, 0.3%, mean maximal concentrations are expected to be less than 2.5 ng/mL.

Microbiology: Ciprofloxacin has in vitro activity against a wide range of gram-negative and gram-positive organisms. The bactericidal action of ciprofloxacin results from interference with the enzyme DNA gyrase which is needed for the synthesis of bacterial DNA.

Ciprofloxacin has been shown to be active against most strains of the following microorganisms both in vitro and in clinical infections (see INDICATIONS AND USAGE section).

The following in vitro data are available; but their clinical significance in ophthalmologic infections is unknown. The safety and effectiveness of ciprofloxacin in treating conjunctivitis due to these microorganisms have not been established in adequate and well controlled trials.

The following organisms are considered susceptible when evaluated using systemic breakpoints. However, a correlation between the in vitro systemic breakpoint and ophthalmological efficacy has not been established. Ciprofloxacin exhibits in vitro minimal inhibitory concentrations (MIC’s) of 1 mcg/mL or less (systemic susceptible breakpoint) against most (greater than or equal to 90%) strains of the following ocular pathogens.

Most strains of Burkholderia cepacia and some strains of Stenotrophomonas maltophilia are resistant to ciprofloxacin as are most anaerobic bacteria, including Bacteroides fragilis and Clostridium difficile.

Clinical Studies: In multi-center clinical trials, approximately 75% of the patients with signs and symptoms of bacterial conjunctivitis and positive conjunctival cultures were clinically cured and approximately 80% had presumed pathogens eradicated by the end of treatment (Day 7).

Ciloxan® (ciprofloxacin ophthalmic ointment) 0.3% is indicated for the treatment of bacterial conjunctivitis caused by susceptible strains of the microorganisms listed below:

FOR TOPICAL OPHTHALMIC USE ONLY.
NOT FOR INJECTION INTO THE EYE.
Serious and occasionally fatal hypersensitivity (anaphylactic) reactions, some following the first dose, have been reported in patients receiving systemic quinolone therapy. Some reactions were accompanied by cardiovascular collapse, loss of consciousness, tingling, pharyngeal or facial edema, dyspnea, urticaria, and itching. Only a few patients had a history of hypersensitivity reactions. Serious anaphylactic reactions require immediate emergency treatment with epinephrine and other resuscitation measures, including oxygen, intravenous fluids, intravenous antihistamines, corticosteroids, pressor amines and airway management, as clinically indicated.

General: As with other antibacterial preparations, prolonged use of ciprofloxacin may result in overgrowth of nonsusceptible organisms, including fungi. If superinfection occurs, appropriate therapy should be initiated. Whenever clinical judgment dictates, the patient should be examined with the aid of magnification, such as slit lamp biomicroscopy and, where appropriate, fluorescein staining. Ciprofloxacin should be discontinued at the first appearance of a skin rash or any other sign of hypersensitivity reaction. Ophthalmic ointments may retard corneal healing and cause visual blurring. Patients should be advised not to wear contact lenses if they have signs and symptoms of bacterial conjunctivitis.

Information for Patients: Do not touch tip to any surface as this may contaminate the ointment.

Do not use the product if the imprinted carton seals have been damaged, or removed.

Drug Interactions: Specific drug interaction studies have not been conducted with ophthalmic ciprofloxacin. However, the systemic administration of some quinolones has been shown to elevate plasma concentrations of theophylline, interfere with the metabolism of caffeine, enhance the effects of the oral anticoagulant, warfarin, and its derivatives, and has been associated with transient elevations in serum creatinine in patients receiving cyclosporine concomitantly.

Carcinogenesis, Mutagenesis, Impairment of Fertility: Eight in vitro mutagenicity tests have been conducted with ciprofloxacin and the test results are listed below:

Thus, two of the eight tests were positive, but the results of the following three in vivo test systems gave negative results:

Long-term carcinogenicity studies in mice and rats have been completed. After daily oral dosing for up to two years, there is no evidence that ciprofloxacin had any carcinogenic or tumorigenic effects in these species.

Pregnancy: Reproduction studies have been performed in rats and mice at doses up to six times the usual daily human oral dose and have revealed no evidence of impaired fertility or harm to the fetus due to ciprofloxacin. In rabbits, as with most antimicrobial agents, ciprofloxacin (30 and 100 mg/kg orally) produced gastrointestinal disturbances resulting in maternal weight loss and an increased incidence of abortion. No teratogenicity was observed at either dose. After intravenous administration, at doses up to 20 mg/kg, no maternal toxicity was produced and no embryotoxicity or teratogenicity was observed. There are no adequate and well controlled studies in pregnant women. Ciloxan® (ciprofloxacin ophthalmic ointment) 0.3% should be used during pregnancy only if the potential benefit justifies the potential risk to the fetus.

Pediatric Use: Safety and effectiveness of Ciloxan® (ciprofloxacin ophthalmic ointment) 0.3% in pediatric patients below the age of two years have not been established. Although ciprofloxacin and other quinolones may cause arthropathy in immature Beagle dogs after oral administration, topical ocular administration of ciprofloxacin to immature animals did not cause any arthropathy and there is no evidence that the ophthalmic dosage form has any effect on the weight bearing joints.

Geriatric Use: No overall clinical differences in safety or effectiveness have been observed between the elderly and other adult patients.

Ciprofloxacin and related drugs have been shown to cause arthropathy in immature animals of most species tested following oral administration. However, a one month topical ocular study using immature Beagle dogs did not demonstrate any articular lesions. 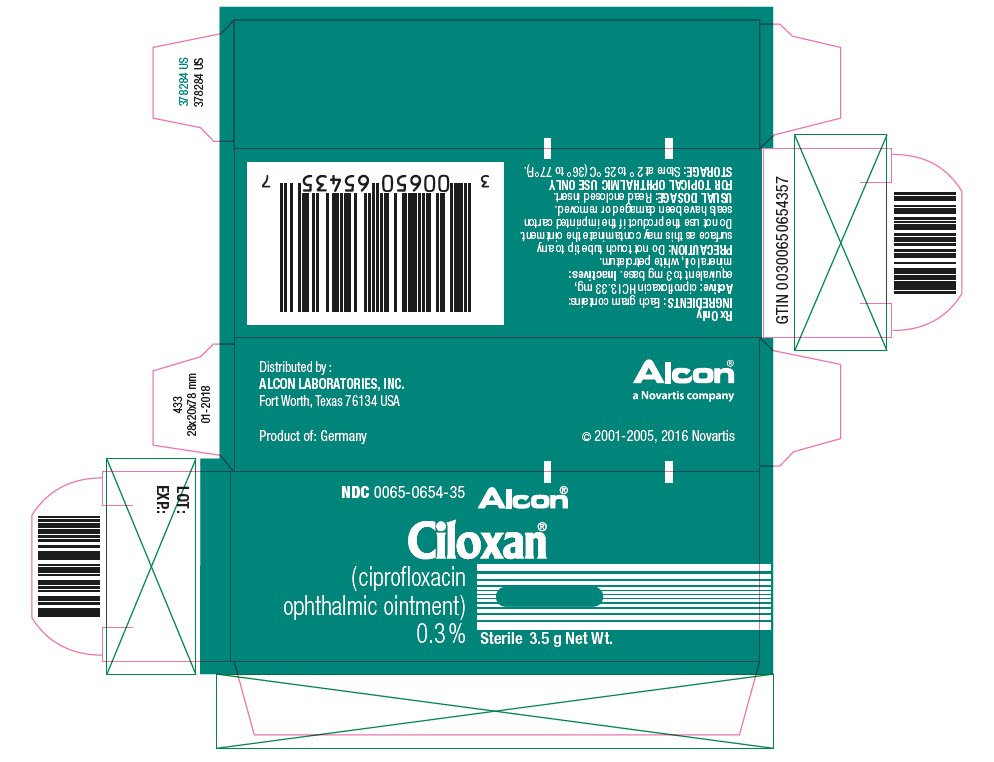