CILOXAN® (ciprofloxacin ophthalmic solution) is a synthetic, sterile, multiple dose, antimicrobial for topical ophthalmic use. Ciprofloxacin is a fluoroquinolone antibacterial active against a broad spectrum of gram-positive and gram-negative ocular pathogens. It is available as the monohydrochloride monohydrate salt of 1-cyclopropyl-6-fluoro-1,4-dihydro-4-oxo-7-(1-piperazinyl)-3-quinoline-carboxylic acid. It is a faint to light yellow crystalline powder with a molecular weight of 385.8. Its empirical formula is C17H18FN3O3•HCl•H2O and its chemical structure is as follows: 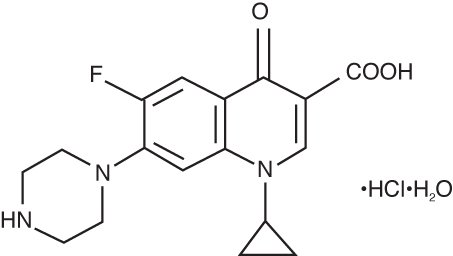 Ciprofloxacin differs from other quinolones in that it has a fluorine atom at the 6-position, a piperazine moiety at the 7-position, and a cyclopropyl ring at the 1-position.

Systemic Absorption: A systemic absorption study was performed in which CILOXAN® (ciprofloxacin ophthalmic solution) 0.3% was administered in each eye every two hours while awake for two days followed by every four hours while awake for an additional 5 days. The maximum reported plasma concentration of ciprofloxacin was less than 5 ng/mL. The mean concentration was usually less than 2.5 ng/mL.

Microbiology: Ciprofloxacin has in vitro activity against a wide range of gram-negative and gram-positive organisms. The bactericidal action of ciprofloxacin results from interference with the enzyme DNA gyrase which is needed for the synthesis of bacterial DNA.

Ciprofloxacin has been shown to be active against most strains of the following organisms both in vitro and in clinical infections (see INDICATIONS AND USAGE).

Ciprofloxacin has been shown to be active in vitro against most strains of the following organisms, however, the clinical significance of these data is unknown:

Enterococcus faecalis (Many strains are only moderately susceptible)

The minimal bactericidal concentration (MBC) generally does not exceed the minimal inhibitory concentration (MIC) by more than a factor of 2. Resistance to ciprofloxacin in vitro usually develops slowly (multiple-step mutation).

Ciprofloxacin does not cross-react with other antimicrobial agents such as beta-lactams or aminoglycosides; therefore, organisms resistant to these drugs may be susceptible to ciprofloxacin.

Ciloxan Ophthalmic Solution is indicated for the treatment of infections caused by susceptible strains of the designated microorganisms in the conditions listed below:

NOT FOR INJECTION INTO THE EYE.

General: As with other antibacterial preparations, prolonged use of ciprofloxacin may result in overgrowth of nonsusceptible organisms, including fungi. If superinfection occurs, appropriate therapy should be initiated. Whenever clinical judgment dictates, the patient should be examined with the aid of magnification, such as slit lamp biomicroscopy and, where appropriate, fluorescein staining.

Ciprofloxacin should be discontinued at the first appearance of a skin rash or any other sign of hypersensitivity reaction.

Information for patients: Do not touch dropper tip to any surface, as this may contaminate the solution.

Drug Interactions: Specific drug interaction studies have not been conducted with ophthalmic ciprofloxacin. However, the systemic administration of some quinolones has been shown to elevate plasma concentrations of theophylline, interfere with the metabolism of caffeine, enhance the effects of the oral anticoagulant, warfarin, and its derivatives, and has been associated with transient elevations in serum creatinine in patients receiving cyclosporine concomitantly.

Carcinogenesis, Mutagenesis, Impairment of Fertility: Eight in vitro mutagenicity tests have been conducted with ciprofloxacin and the test results are listed below:

Thus, two of the eight tests were positive, but the results of the following three in vivo test systems gave negative results:

Long term carcinogenicity studies in mice and rats have been completed. After daily oral dosing for up to two years, there is no evidence that ciprofloxacin had any carcinogenic or tumorigenic effects in these species.

Pregnancy: Reproduction studies have been performed in rats and mice at doses up to six times the usual daily human oral dose and have revealed no evidence of impaired fertility or harm to the fetus due to ciprofloxacin. In rabbits, as with most antimicrobial agents, ciprofloxacin (30 and 100 mg/kg orally) produced gastrointestinal disturbances resulting in maternal weight loss and an increased incidence of abortion. No teratogenicity was observed at either dose. After intravenous administration, at doses up to 20 mg/kg, no maternal toxicity was produced and no embryotoxicity or teratogenicity was observed. There are no adequate and well controlled studies in pregnant women. CILOXAN® (ciprofloxacin ophthalmic solution) 0.3% should be used during pregnancy only if the potential benefit justifies the potential risk to the fetus.

Pediatric Use: The safety and effectiveness of CILOXAN® (ciprofloxacin ophthalmic solution) 0.3% have been established in all ages. Use of CILOXAN is supported by evidence from adequate and well controlled studies of CILOXAN in adults, children and neonates (see Clinical Studies). Although ciprofloxacin and other quinolones cause arthropathy in immature animals after oral administration, topical ocular administration of ciprofloxacin to immature animals did not cause any arthropathy and there is no evidence that the ophthalmic dosage form has any effect on the weight bearing joints.

Geriatric Use: No overall differences in safety or effectiveness have been observed between elderly and younger patients.

A topical overdose of CILOXAN® (ciprofloxacin ophthalmic solution) 0.3% may be flushed from the eye(s) with warm tap water.

How Supplied: As a sterile ophthalmic solution in Alcon's DROP-TAINER® dispensing system consisting of a natural low density polyethylene bottle and dispensing plug and tan polypropylene closure. Tamper evidence is provided with a shrink band around the closure and neck area of the package.

Ciprofloxacin and related drugs have been shown to cause arthropathy in immature animals of most species tested following oral administration. However, a one-month topical ocular study using immature Beagle dogs did not demonstrate any articular lesions.

Following therapy with CILOXAN® (ciprofloxacin ophthalmic solution) 0.3%, 76% of the patients with corneal ulcers and positive bacterial cultures were clinically cured and complete re-epithelialization occurred in about 92% of the ulcers.

In 3 and 7 day multicenter clinical trials, 52% of the patients with conjunctivitis and positive conjunctival cultures were clinically cured and 70%-80% had all causative pathogens eradicated by the end of treatment.

In a randomized, double-masked, multicenter, parallel-group clinical trial of pediatric patients with bacterial conjunctivitis, between birth and 31 days of age, patients were dosed with CILOXAN or another anti-infective agent. Clinical outcomes for the trial demonstrated a clinical cure rate of 80% at Day 9 and a microbiological eradication success rate of 85% at Day 9.

Please note that microbiologic eradication does not always correlate with clinical outcome in anti-infective trials. 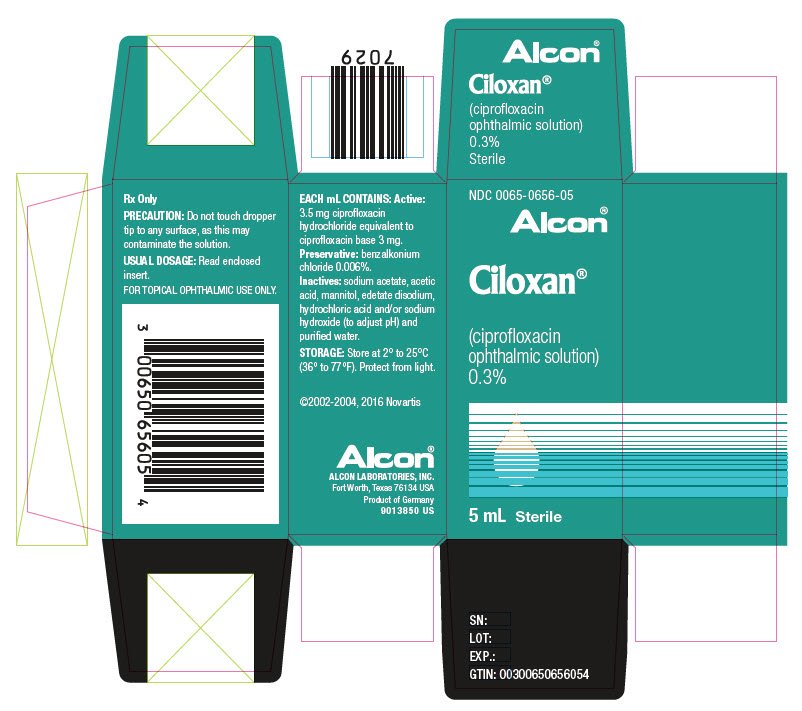