Indications and Usage for Bepreve

Bepreve® (bepotastine besilate ophthalmic solution) 1.5% is a histamine H1 receptor antagonist indicated for the treatment of itching associated with signs and symptoms of allergic conjunctivitis.

Instill one drop of Bepreve into the affected eye(s) twice a day. Remove contact lenses prior to instillation of Bepreve.

Bepreve is contraindicated in patients with a history of hypersensitivity reactions to bepotastine or any of the other ingredients [see Adverse Reactions (6.2)].

Contamination of Tip and Solution

Bepreve should not be used to treat contact lens-related irritation.

Hypersensitivity reactions have been reported rarely during the post-marketing use of Bepreve. Because these reactions are reported voluntarily from a population of unknown size, it is not always possible to reliably estimate their frequency or establish a causal relationship to drug exposure. The hypersensitivity reactions may include itching, body rash, and swelling of lips, tongue and/or throat.

There are no available human data for the use of Bepreve during pregnancy to inform any drug-associated risks.

Oral administration of bepotastine besilate to pregnant rats or rabbits during organogenesis or during the pre/postnatal period did not produce adverse embryofetal or offspring effects at clinically relevant systemic exposures. Maternal toxicity was observed in the rabbits at the lowest dose administered, 20 mg/kg/day (215 times the maximum recommended human ophthalmic dose, RHOD, on a mg/m2 basis) [see Data].

In embryofetal development studies, oral administration of bepotastine besilate to pregnant rabbits throughout organogenesis did not produce teratogenic effects at maternal doses up to 500 mg/kg/day (approximately 5,400 times the maximum RHOD, on a mg/m2 basis). A maternal no observed adverse effect level (NOAEL) was not identified in this study due to spontaneous abortion observed at the lowest dose tested, 20 mg/kg/day (approximately 215 times higher than

The developmental and health benefits of breastfeeding should be considered, along with the mother’s clinical need for Bepreve, and any potential adverse effects on the breastfed infant from Bepreve.

Bepotastine is a topically active, direct H1-receptor antagonist and an inhibitor of the release of histamine from mast cells.

Excretion: The main route of elimination of bepotastine besilate is urinary excretion (with approximately 75-90% excreted unchanged in urine).

The no observable adverse effect level for bepotastine besilate based on nominal dose levels in carcinogenicity tests were 18.7 to 19.9 mg/kg/day in mice and 9.6 to 9.8 mg/kg/day in rats (corresponding to systemic exposures approximately 60 and 20 times higher than that anticipated in humans at RHOD, respectively).

There was no evidence of genotoxicity in the Ames test (mutagenicity), in CHO cells (chromosome aberration), in mouse hepatocytes (unscheduled DNA synthesis), or in the mouse micronucleus test.

Oral administration of bepotastine to male and female rats at doses up to 1,000 mg/kg/day (5,400 times higher than the maximum RHOD, on a mg/m2 basis) resulted in reduction in fertility index and surviving fetuses. Oral administration of bepotastine besilate produced no observed adverse effects on fertility or reproduction in rats at oral doses up to 200 mg/kg/day (corresponding to an estimated blood plasma concentration 3,300 times higher than that anticipated in humans at the RHOD).

Clinical efficacy was evaluated in two conjunctival allergen challenge (CAC) studies (237 patients). Bepreve (bepotastine besilate ophthalmic solution) 1.5% was more effective than its vehicle for relieving ocular itching induced by an ocular allergen challenge, both at a CAC 15 minutes post-dosing and a CAC 8 hours post-dosing of Bepreve.

The safety of Bepreve was evaluated in a randomized clinical study of 861 subjects over a period of 6 weeks.

•
Sterility of Dropper Tip
Advise patients not to touch the dropper tip to any surface, as this may contaminate the solution and to keep the bottle tightly closed when not in use.

Bepreve is a trademark of Bausch & Lomb Incorporated or its affiliates.

© 2022 Bausch & Lomb Incorporated or its affiliates

FOR TOPICAL OPHTHALMIC USE 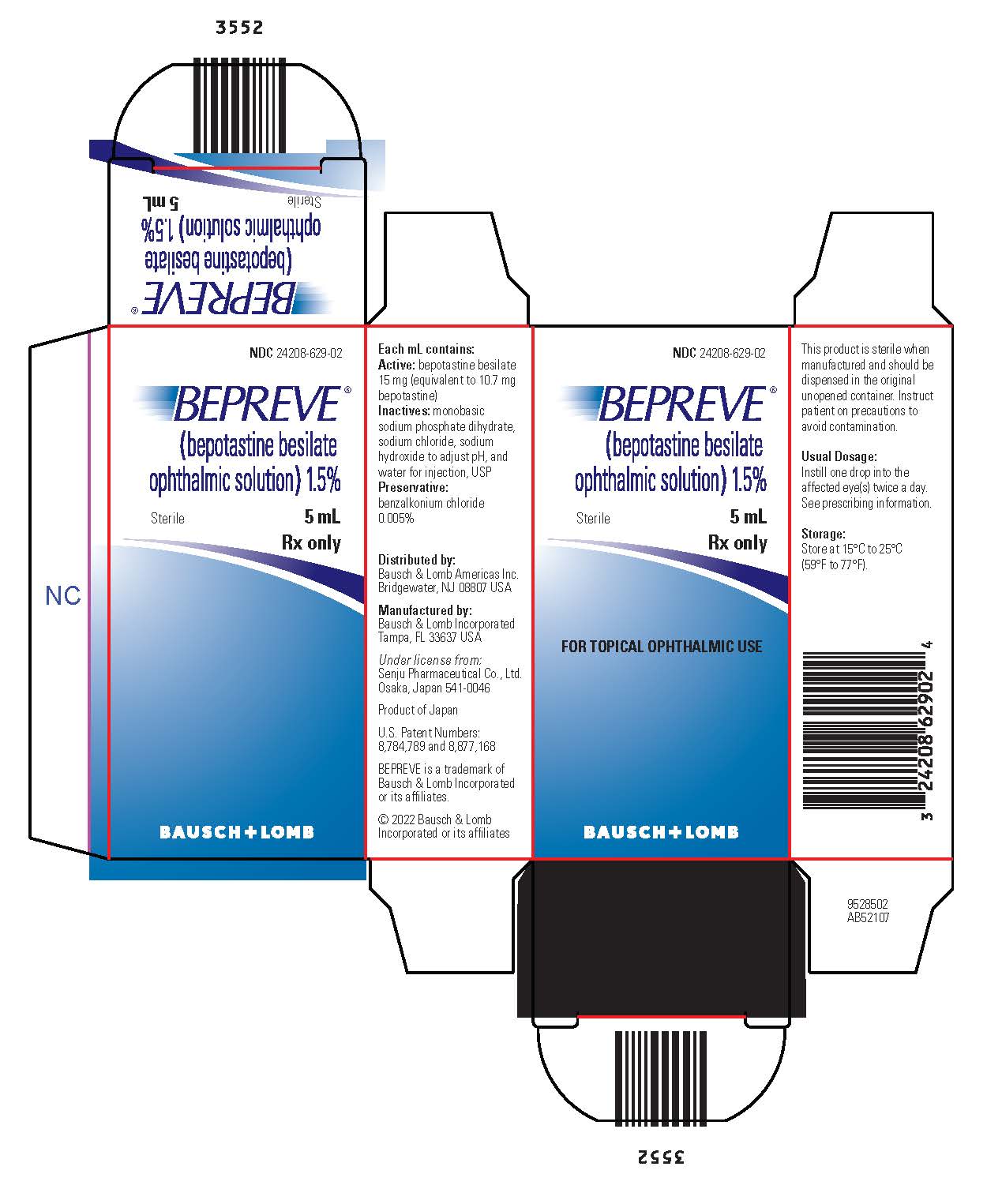