A selective serotonin- and norepinephrine-reuptake inhibitor (SNRI); a fibromyalgia agent.

Has been used in the treatment of major depressive disorder† and is approved for treating depression in some countries; this indication is not an FDA-labeled use.

Administer orally twice daily in divided doses without regard to meals; however, taking the drug with food may improve tolerability.

Available as milnacipran hydrochloride; dosage expressed in terms of the salt.

Safety and efficacy of dosages >200 mg daily not evaluated.

No dosage adjustment necessary. Use with caution in patients with severe hepatic impairment. Generally should not be prescribed to patients with substantial alcohol use or evidence of chronic hepatic disease. (See Hepatic Effects under Cautions and see also Hepatic Impairment under Cautions.)

No specific dosage recommendations at this time, but consider possibility of age-related decreases in renal function when selecting dosage. (See Renal Impairment under Dosage and Administration.)

Possible worsening of depression and/or the emergence of suicidal ideation and behavior (suicidality) or unusual changes in behavior in both adult and pediatric patients with major depressive disorder, whether or not they are taking antidepressants; may persist until clinically important remission occurs. (See Boxed Warning and also see Pediatric Use under Cautions.) However, suicide is a known risk of depression and certain other psychiatric disorders, and these disorders themselves are the strongest predictors of suicide. In clinical trials, no suicides were reported in adult fibromyalgia patients treated with milnacipran.

Appropriately monitor and closely observe patients receiving milnacipran for any reason for clinical worsening, suicidality, and unusual changes in behavior, particularly during initiation of therapy (i.e., the first few months) and during periods of dosage adjustments.

Anxiety, agitation, panic attacks, insomnia, irritability, hostility, aggressiveness, impulsivity, akathisia, hypomania, and/or mania may be precursors to emerging suicidality. Consider changing or discontinuing therapy in patients whose depression is persistently worse and in those with emergent suicidality or symptoms that might be precursors to worsening depression or suicidality, particularly if severe, abrupt in onset, or not part of the patient’s presenting symptoms. If decision is made to discontinue therapy, taper milnacipran dosage as rapidly as is feasible but consider risks of abrupt discontinuance. (See Withdrawal of Therapy under Cautions.)

Potentially life-threatening serotonin syndrome reported with SNRIs and SSRIs, including milnacipran, when used alone, but particularly during concurrent therapy with other serotonergic drugs (e.g., 5-HT1 receptor agonists [“triptans”], TCAs, buspirone, fentanyl, lithium, tramadol, tryptophan, St. John's wort [Hypericum perforatum]) and with drugs that impair the metabolism of serotonin (particularly MAO inhibitors, both those used to treat psychiatric disorders and others, such as linezolid and methylene blue). (See Contraindications under Cautions and also see Interactions.)

Concurrent use of milnacipran with other drugs that increase BP and heart rate not evaluated; use with caution. (See Interactions.)

Monitor BP prior to and periodically during therapy. Treat preexisting hypertension and other cardiovascular disease before initiating milnacipran therapy. If sustained increase in BP occurs during therapy, reduce milnacipran dosage or discontinue the drug, if clinically warranted.

Concurrent use of milnacipran with other drugs that increase BP and heart rate not evaluated; use with caution. (See Interactions.)

Monitor heart rate prior to and periodically during therapy. If sustained increase in heart rate occurs during therapy, reduce milnacipran dosage or discontinue the drug, if clinically warranted.

Use not generally recommended in patients with a history of substantial alcohol consumption or evidence of chronic hepatic disease.

Treatment with SSRIs and SNRIs, including milnacipran, may cause hyponatremia; in many cases, SIADH is apparent cause. Increased risk in patients who are volume-depleted, elderly, or taking diuretics. Consider drug discontinuance in patients with symptomatic hyponatremia.

Possible increased risk of bleeding with SSRIs and SNRIs, including milnacipran; events ranged from ecchymoses, hematomas, epistaxis, and petechiae to life-threatening hemorrhages. Concomitant use of aspirin, NSAIAs, warfarin, or other anticoagulants may increase risk. (See Drugs Affecting Hemostasis and Specific Drugs under Interactions and also see Advice to Patients.)

Activation of mania or hypomania not reported in fibromyalgia clinical trials, but has been reported with similar drugs in patients with major depressive disorder. Use with caution in patients with a history of mania.

Patients with History of Dysuria

Pupillary dilation (mydriasis) occurs with SNRIs, including milnacipran, and may trigger an acute attack of angle-closure glaucoma (narrow-angle glaucoma) in patients with anatomically narrow angles who do not have a patent iridectomy. (See Advice to Patients.)

Concomitant Use with Alcohol

Possible hepatotoxicity when milnacipran and alcohol are used together. Avoid concomitant milnacipran use in patients with substantial alcohol consumption or evidence of chronic hepatic disease. (See Hepatic Effects under Cautions.)

Pregnancy registry at 1-877-643-3010; registry information also available at [Web] or by email at pregnancyregistries2@INCResearch.com.

Possible complications, sometimes severe and requiring prolonged hospitalization, respiratory support, enteral nutrition, and other forms of supportive care, in neonates exposed to SSRIs or SNRIs late in the third trimester; may arise immediately upon delivery.

Distributed into milk; use with caution in nursing women. (See Distribution under Pharmacokinetics.)

Safety and efficacy not established in pediatric patients <18 years of age; not recommended for use in such patients.

Milnacipran is an SNRI and is similar to some drugs used for the treatment of depression and other psychiatric disorders. FDA warns that a greater risk of suicidal thinking or behavior (suicidality) occurred during the first few months of antidepressant treatment compared with placebo in children and adolescents with major depressive disorder, obsessive-compulsive disorder (OCD), or other psychiatric disorders based on pooled analyses of 24 short-term, placebo-controlled trials of 9 antidepressant drugs (SSRIs and others). However, a more recent meta-analysis of 27 placebo-controlled trials of 9 antidepressants (SSRIs and others) in patients <19 years of age with major depressive disorder, OCD, or non-OCD anxiety disorders suggests that the benefits of antidepressant therapy in treating these conditions may outweigh the risks of suicidal behavior or suicidal ideation. No suicides occurred in these pediatric trials.

Carefully consider these findings when assessing potential benefits and risks of milnacipran in a child or adolescent for any clinical use. (See Boxed Warning and Worsening of Depression and Suicidality Risk under Cautions.)

No overall differences in safety or efficacy relative to younger adults. Consider possible reduced renal clearance of the drug in geriatric patients. (See Geriatric Patients under Dosage and Administration and see Pharmacokinetics.)

In pooled data analyses, a reduced risk of suicidality was observed in adults ≥65 years of age with antidepressant therapy compared with placebo. (See Boxed Warning and see Worsening of Depression and Suicidality Risk under Cautions.)

Concurrent use of milnacipran with other drugs that increase BP and heart rate not evaluated; use with caution. (See Elevated Blood Pressure and Elevated Heart Rate under Cautions.)

Potential increased risk of bleeding if used concomitantly with drugs that affect coagulation or bleeding; use with caution. (See Abnormal Bleeding under Cautions.)

Exposure is dose-proportional over the therapeutic dosage range.

AUC is increased by 31% in patients with severe hepatic impairment.

Mean AUC increased by 16, 52, and 199% in individuals with mild, moderate, and severe renal impairment, respectively.

Principally metabolized via glucuronide conjugation and, to a lesser extent, N-dealkylation.

Milnacipran and metabolites eliminated principally (90%) by renal excretion. Majority (approximately 55%) of a dose excreted as unchanged drug in urine.

Elimination half-life increased by 55% in patients with severe hepatic impairment.

Elimination half-life increased by 38, 41, and 122% in individuals with mild, moderate, and severe renal impairment, respectively. 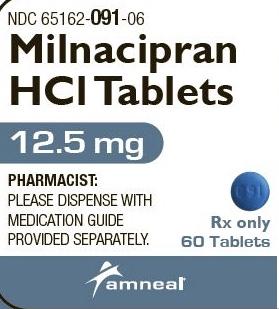