This page contains information on Itrafungol (itraconazole oral solution) for veterinary use.
The information provided typically includes the following:

Antifungal for oral use in cats only

ITRAFUNGOL oral solution is indicated for the treatment of dermatophytosis caused by Microsporum canis in cats.

The solution should be administered orally using the enclosed graduated dosing syringe.

Each line on the dosing syringe represents 0.05 mL of oral solution.

The solution should be administered orally using the enclosed graduated dosing syringe. Keep the bottle upright and insert the dosing syringe through the opening of the top of the bottle (Figure 1). Do not invert the bottle (Figure 2). Fill the syringe by pulling the plunger until it reaches the graduation corresponding to the correct mL dose as indicated at the top of the syringe ring (Figure 3). Treat the cat by slowly and gently administering the liquid into the mouth, allowing the cat to swallow the product (Figure 4). For cats weighing more than 13.0 lbs, the total dose will need to be calculated and given over two doses as the dosing syringe only holds 3.0 mL of solution. 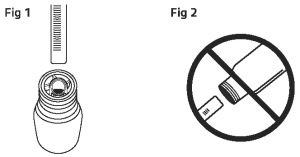 After dosing, the syringe should be removed from the bottle, rinsed and dried and the bottle cap should be screwed back on tightly.

Do not administer to cats with hypersensitivity to itraconazole.

ITRAFUNGOL (itraconazole oral solution) has not been shown to be safe in pregnant cats (see Animal Safety section). ITRAFUNGOL should only be used in pregnant or lactating cats when the benefits outweigh the potential risks.

Special precautions for person administering the veterinary product to the animal:

Microsporum canis dermatophytosis is a zoonotic disease (a disease that can be transmitted from animals to humans); therefore consult a physician if a suspected lesion occurs on a human. Wear protective gloves when handling the animal during treatment or when cleaning the syringe. Wash hands and exposed skin after handing the animal.

ITRAFUNGOL has not been shown to be sporicidal; therefore in order to reduce zoonotic potential, environmental contamination, and to decrease course of the disease, topical and environmental treatment should also be utilized.

ITRAFUNGOL has been associated with renal changes found on histopathology that were not noted after an eight week recovery period (see Animal Safety). Use with caution in cats with renal dysfunction.

ITRAFUNGOL is metabolized by the liver (mainly CYP3A) and can cause elevated liver enzymes (see Animal Safety section). Use with caution in cats with impaired liver function. If clinical signs suggestive of liver dysfunction develop, treatment should be discontinued.

ITRAFUNGOL is a cytochrome p-450 inhibitor and may increase or prolong plasma concentrations of other drugs metabolized by this pathway, such as amitriptyline, amlodipine, benzodiazepines, buspirone, cisapride, corticosteroids, cyclosporine, ivermectin, and macrolide antibiotics.

Negative inotropic effects have been reported in literature when itraconazole was administered intravenously to dogs and healthy human volunteers. Cats suffering from heart disease should be carefully monitored during treatment.

Field safety was evaluated in 266 cats randomized to receive itraconazole oral solution. Of the 266 cats that received at least one dose of itraconazole oral solution, adverse reactions included 35 cases (13%) of one or more elevated hepatic enzymes and 8 cases (3%) of gastrointestinal upset, including decreased appetite, vomiting and/or diarrhea. Other infrequent adverse reactions included less than 3 cases each of somnolence, depression, and increased salivation.

For technical assistance or to report suspected adverse drug events, contact Elanco US Inc. at 1-888-545-5973.

For additional information about adverse drug experience reporting for animal drugs, contact FDA at 1-888-FDA-VETS or on line at www.fda.gov/reportanimalae

The mode of action of itraconazole is based on its highly selective binding ability to fungal cytochrome p-450 iso-enzymes. This inhibits the synthesis of ergosterol and affects membrane-bound enzyme function and membrane permeability. This effect is irreversible and causes structural degeneration of the fungal organism.

Itraconazole was absorbed rapidly following oral administration of ITRAFUNGOL (itraconazole oral solution) to laboratory cats. Compared to the fasted state, administration of ITRAFUNGOL with food results in slightly higher (1.3 fold) mean total itraconazole exposure (AUC), delay in median Tmax (Fed 4 hours vs. Fasted 2 hours) and significant decrease (approximately 0.55 fold) in maximum plasma concentration (Cmax). ITRAFUNGOL can be administered with or without food. Itraconazole oral solution binds extensively to plasma proteins (> 99%), and distributes well to tissues. More than 30 metabolites are formed. Hydroxy-itraconazole is the parent metabolite and has antifungal activity. Excretion is rapid and primarily via the feces.

Effectiveness was demonstrated using ITRAFUNGOL (itraconazole oral solution) in a masked, placebo controlled laboratory study. Eighty cats were experimentally infected with Microsporum canis and treated with either ITRAFUNGOL or sterile water (control product) for the proposed therapeutic treatment schedule followed by a 4-week follow-up period. No topical therapy was used during this study. A statistical difference (P =0.0003) in mycological cure rate (defined as two consecutive negative mycological cultures) was demonstrated between cats treated with ITRAFUNGOL (24/40 or 60%) versus control (1/40 or 2.5%). Ninety percent of ITRAFUNGOL-treated cats (36/40) achieved at least one negative culture by the end of the study. Improvement was seen in inoculation site erythema and skin thickening by Day 7 and in crusts and scales by Day 14. By the end of the study, 98% of ITRAFUNGOL-treated cats had complete resolution of all clinical lesions, compared to 15% in the control group. Wood’s lamp cure (defined as no fluorescence at the base and mid-shaft of the hair) in the ITRAFUNGOL-treated group (39/40 or 97.5%) was higher compared to the control group (6/40 or 15%). Itraconazole MICs indicative of susceptibility were obtained in M. canis isolates from the two cats unsuccessfully treated with ITRAFUNGOL.

A masked, positive-controlled, multi-site field study was conducted in client-owned cats in Europe. In this study, 514 cats diagnosed with dermatophytosis were randomly administered itraconazole oral solution or an active control. Cats received a daily dose of either itraconazole oral solution for three alternating weeks plus a placebo tablet once daily for 5 consecutive weeks, or a placebo solution for three alternating weeks plus the active control once daily for five weeks. Success was evaluated on clinical cure, which was noted with a complete resolution of all clinical lesions. Four weeks after the end of treatment, 175 (83%) out of 207 cats treated with itraconazole oral solution were clinically cured.

Margin of Safety Study with Recovery

In a margin of safety study, ITRAFUNGOL (itraconazole oral solution) was administered orally to 9-10 week old healthy kittens once daily at 0X (saline control), 1X (5 mg/kg), 3X (15 mg/kg), and 5X (25 mg/kg) the therapeutic dose for 17 alternating weeks (9 total weeks of dosing) followed by an 8 week recovery period. Hypersalivation during or immediately following dosing, vomiting, and loose stool were the most frequent abnormal clinical observations related to treatment with ITRAFUNGOL. Hypersalivation was limited to the 3X and 5X groups and was observed in every dosing cycle. Vomiting was noted at similar levels in the control, 1X and 3X groups; however, it occurred approximately twice as often in the 5X group. Mild gingival bleeding and perioral irritation (patchy alopecia and erythema) was noted in cats in the 3X and 5X groups. Food consumption was consistently higher throughout the study in the control group than the ITRAFUNGOL group. The control group gained more weight during the study than the groups administered ITRAFUNGOL. Mild elevations in ALT were sporadically noted in all groups; however, the number of affected cats increased with the higher doses (two cats in the control group, two cats in the 1X group, three cats in the 3X group, and four cats in the 5X group). In most cats, ALT values peaked just above the upper limit of the reference range and were continuing to trend upward or were elevated yet stable at the end of the study. One cat in the 5X group exhibited inappetence progressing to anorexia, dehydration and vomiting during the first dosing cycle. This cat had repeated episodes of inappetence during the second and third dosing cycles. This cat also had markedly elevated ALT and AST values on Day 36 (693 U/L and 283 U/L, respectively), was treated with minimal supportive care and recovered to complete the study.

In a margin of safety study, ITRAFUNGOL (itraconazole oral solution) was administered orally to healthy adult cats once daily at 0X (saline control), 1X (5 mg/kg), 3X (15 mg/kg), and 5X (25 mg/kg) the therapeutic dose for 17 alternating weeks (9 total weeks of dosing) with no recovery period. Hypersalivation was the most frequent abnormal clinical observation related to treatment with ITRAFUNGOL and the incidence increased with the higher doses. One cat in group 4 (5X; Cat #26302) lost 22% of its body weight and had a number of episodes of vomiting, salivation, and anorexia during the treatment period. This cat also had renal lesions found on histopathology. Increasing trends were noted in ALT, AST, and creatinine values in some cats administered ITRAFUNGOL as compared to baseline values. Abnormal renal findings included proximal convoluted tubule acute degeneration in 3 cats in the 1X group and 3 cats in the 5X group; one 5X cat (cat #26302) also had proximal convoluted tubule marked pallor and focal mononuclear cell infiltration in the kidneys. In the lungs, one 3X group cat and five 5X cats had intra-alveolar foamy macrophages; five 5X group cats had intra-alveolar syncytial cells.

These histopathology findings are likely related to exposure to ITRAFUNGOL, specifically the vehicle component hydroxypropyl-β-cyclodextrin (HPβCD). There were no corresponding adverse clinical effects noted on observation or on clinical pathology analysis. In addition, similar changes have been described in literature in other species exposed to HPβCD and have been reported to be reversible.

In a study of 16 pregnant queens administered itraconazole oral solution at 5 mg/kg bodyweight for a total of 21 days (7 days on alternate weeks) during gestation or lactation, there was a high frequency of fetal resorption (partial and total), abnormal fetuses, and abnormal maternal behaviors. Confounding factors, such as infectious disease (Chlamydia psittaci) in some cats made it difficult to establish a definitive relationship between administration of itraconazole and the abnormal findings. However, the results of this study reveal potential reproductive safety risks and do not support the safe of use of ITRAFUNGOL in pregnant queens.

ITRAFUNGOL (itraconazole oral solution) is available in a glass bottle containing 52 mL of oral solution, closed with a child resistant screw cap and packaged in a cardboard box that includes a package insert and a graduated dosing syringe.

Manufactured for Elanco US Inc., Greenfield, IN 46140

Itrafungol, Elanco and the diagonal bar logo are trademarks of Elanco or its affiliates.