Note: This document contains side effect information about tacrine. Some dosage forms listed on this page may not apply to the brand name Cognex.

Elevations in LFTs (liver function tests) have been reported in as many as 50% of patients started on tacrine (the active ingredient contained in Cognex) therapy. LFTs should be closely monitored while patients are treated with tacrine, particularly when therapy is initiated and when dosages are altered.

Specific recommendations for LFT monitoring are as follows:

Every-other-week monitoring of LFTs, particularly ALT, is recommended during the first sixteen weeks of tacrine therapy.

If modest elevations of up to two times the ULN (upper limit of normal) occur, continued every-other-week LFTs are recommended.

If elevations of up to three times ULN occur, weekly LFT monitoring is recommended until LFTs return to normal.

If elevations of up to five times ULN occur, a daily dosage reduction of 40 mg and weekly LFT monitoring is recommended until LFTs return to normal.

If elevations greater than five times ULN occur, discontinuation of tacrine therapy is recommended until LFTs return to normal.

The cholinomimetic effects of tacrine may result in an increase in gastric acid secretion and may therefore increase the risk of gastric ulceration in some patients.

Because of the potential vagotonic effects of cholinomimetic therapy, use in patients with "sick sinus syndrome" should be undertaken, if at all, with caution.[Ref]

Agranulocytosis has been reported in four of 8000 treated patients. Three of the four patients had medical conditions associated with agranulocytosis.[Ref]

A case of exacerbation of parkinsonism has been reported. Some clinicians have also reported vertigo and paresthesias as nervous system effects. Six cases of generalized tonic or tonic-clonic seizures have also been reported.[Ref] 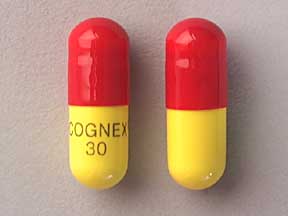