Sodium Nitroprusside can cause precipitous decreases in blood pressure which can lead to irreversible ischemic injuries or death. Use only with continuous blood pressure monitoring [see Dosage and Administration (2.2) and Warnings and Precautions (5.1).

Sodium nitroprusside metabolism produces dose-related cyanide, which can be lethal. A patient’s ability to buffer cyanide will be exceeded in less than one hour at the maximum dose rate (10 mcg/kg/min); limit infusions at the maximum rate to as short a duration as possible [see Warnings and Precautions (5.2)].

Indications and Usage for Nipride RTU

Sodium nitroprusside is indicated for the immediate reduction of blood pressure of adult and pediatric patients in hypertensive crises.

Induction and Maintenance of Controlled Hypotension

Sodium nitroprusside indicated for induction and maintenance of controlled hypotension in adults and children during surgery, to reduce bleeding.

Inspect parenteral drug products for particulate matter and discoloration prior to administration, whenever solution and container permit. Sodium nitroprusside should be a clear colorless to red/brown color; do not use if solution is blue, green, or bright red.

•
the desired effect is achieved,
•
systemic blood pressure cannot be further reduced without compromising the perfusion of vital organs, or
•
the maximum recommended infusion rate of 10 mcg/kg/min has been reached, whichever occurs first.

Do not administer other drugs in the same solution with sodium nitroprusside.

Sodium nitroprusside must be delivered by a volumetric infusion pump because small variations in infusion rate can lead to wide, undesirable variations in blood pressure [see Clinical Pharmacology (12.2)].

Sodium nitroprusside, can cause excessive hypotension leading to hypoperfusion of vital organs. Hypotension should resolve within 1-10 minutes after discontinuation of the nitroprusside infusion; during these few minutes, it may be helpful to put the patient into a head-down (Trendelenburg) position to maximize venous return. If hypotension persists more than a few minutes after discontinuation, consider other causes. Elderly patients may be more sensitive to the hypotensive effects of the drug.

Sodium nitroprusside infusions above 2 mcg/kg/min generate cyanide ion (CN¯) faster than the body can normally dispose of it. At the maximum recommended infusion rate of 10 mcg/kg/min, the patient’s ability to buffer CN¯ will be exceeded in less than one hour [see Overdose (10)].

Patients with hepatic dysfunction are more susceptible to cyanide toxicity.

An early manifestation of cyanide toxicity is increasing dosage requirements to maintain blood pressure control. Metabolic acidosis may not be evident for more than an hour after toxic cyanide levels accumulate.

Most of the cyanide produced during metabolism of sodium nitroprusside is eliminated in the form of thiocyanate. Thiocyanate is mildly neurotoxic (tinnitus, miosis, hyperreflexia) at serum levels of 1 mmol/L (60 mg/L). Thiocyanate is life-threatening when levels reach ~200 mg/L. Therefore, routine monitoring of plasma thiocyanate levels is recommended in patients with normal renal function when cumulative sodium nitroprusside doses exceed 7 mg/kg/day. In patients with eGFR <30 mL/min/1.73 m2, limit the mean infusion rate to less than 3 mcg/kg/min. In anuric patients, limit the mean infusion rate to 1 mcg/kg/min.

Renal hemodialysis may be used to eliminate thiocyanate in cases of severe toxicity.

Suspect methemoglobinemia in patients who have received >10 mg/kg of sodium nitroprusside and who exhibit signs of impaired oxygen delivery despite adequate cardiac output and adequate arterial pO2. Methemoglobinemic blood is chocolate brown, without the expected color change on exposure to air. Methemoglobin levels >10% are considered clinically significant.

When methemoglobinemia is diagnosed, the treatment of choice is 1-2 mg/kg of methylene blue, administered intravenously over several minutes.

Like other vasodilators, sodium nitroprusside can cause increases in intracranial pressure.

Anemia and Hypovolemia with Anesthesia

Prolonged use and large doses of sodium nitroprusside during pregnancy may result in cyanide toxicity that may be fatal to the fetus. In the unusual case that there is no appropriate alternative to therapy with sodium nitroprusside for a particular patient, apprise the mother of the potential risk to the fetus [see Warnings and Precautions (5.2)].

Efficacy in the pediatric population was established based on adult trials and supported by the dose-ranging trial (Study 1) and an open label trial of at least 12 hour infusion at a rate that achieved adequate MAP control (Study 2) with pediatric patients on sodium nitroprusside. No novel safety issues were seen in these studies in pediatric patients [see Clinical Studies (14)].

Cyanide levels can be measured by many laboratories, and blood-gas studies that can detect venous hyperoxemia or acidosis are widely available. Acidosis may not appear until more than an hour after the appearance of dangerous cyanide levels. Suspicion of cyanide toxicity is adequate grounds for initiation of treatment.

Treatment of cyanide toxicity consists of:

Hemodialysis is ineffective in removal of cyanide, but it will eliminate most thiocyanate.

Sodium nitrite is available in a 3% solution, and 4-6 mg/kg (about 0.2 mL/kg) should be injected over 2-4 minutes. This dose can be expected to convert about 10% of the patient’s hemoglobin into methemoglobin; this level of methemoglobinemia is not associated with any important hazard of its own.

Immediately after infusion of the sodium nitrite, sodium thiosulfate should be infused. This agent is available in 10% and 25% solutions, and the recommended dose is 150-200 mg/kg; a typical adult dose is 50 mL of the 25% solution. Thiosulfate treatment of an acutely cyanide-toxic patient will raise thiocyanate levels, but not to a dangerous degree.

The nitrite/thiosulfate regimen may be repeated, at half the original doses, after two hours.

Sodium nitroprusside is disodium pentacyanonitrosylferrate(2-) dihydrate, a hypotensive agent whose structural formula is 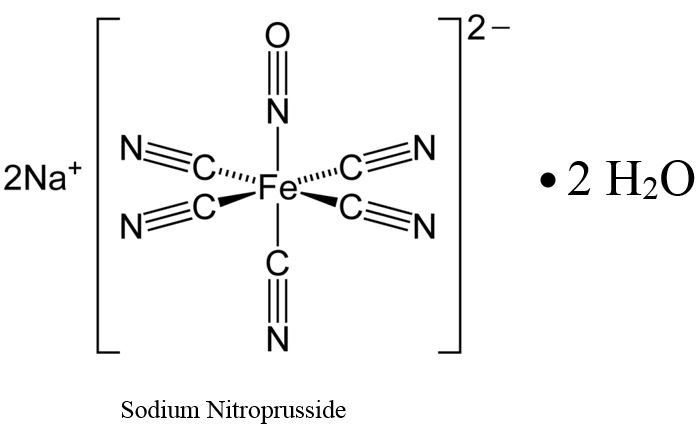 NIPRIDE® RTU is supplied as a sterile, unpreserved, colorless to red-brown solution packaged in a single-use 100-mL vial. Each 100 mL of solution in vial contains 50 mg of sodium nitroprusside (0.5 mg/mL), 900 mg of sodium chloride, USP (9 mg/mL), in sterile water for injection, USP.

NIPRIDE® RTU is also supplied as a sterile, unpreserved, colorless to red-brown solution packaged in a single-use 100-mL vial. Each 100 mL of solution in vial contains 20 mg of sodium nitroprusside (0.2 mg/mL), 900 mg of sodium chloride, USP (9 mg/mL), in sterile water for injection, USP.

NIPRIDE® RTU is also supplied as a sterile, unpreserved, colorless to red-brown solution packaged in a single-use 50-mL vial. Each 50 mL of solution in vial contains 10 mg of sodium nitroprusside (0.2 mg/mL), 450 mg of sodium chloride, USP (9 mg/mL), in sterile water for injection, USP.

Sodium nitroprusside interacts with oxyhemoglobin to produce methemoglobin, cyanide, and nitric oxide (NO). NO then reacts with guanylate cyclase in vascular smooth muscle to produce cGMP that reduces intracellular calcium concentrations resulting in relaxation of vascular smooth muscle and consequent dilatation of peripheral arteries and veins. Other smooth muscle (e.g., uterus, duodenum) is not affected. Sodium nitroprusside is more active on veins than on arteries, but this selectivity is much less marked than that of nitroglycerin. Dilatation of the veins promotes peripheral pooling of blood and decreases venous return to the heart, thereby reducing left ventricular end diastolic pressure and pulmonary capillary wedge pressure (preload). Arteriolar relaxation reduces systemic vascular resistance, systolic arterial pressure, and mean arterial pressure (afterload). Dilatation of the coronary arteries also occurs.

In association with the decrease in blood pressure, sodium nitroprusside administered intravenously to hypertensive and normotensive patients produces slight increases in heart rate and a variable effect on cardiac output. In hypertensive patients, moderate doses induce renal vasodilatation roughly proportional to the decrease in systemic blood pressure, so there is no appreciable change in renal blood flow or glomerular filtration rate.

The hypotensive effect of sodium nitroprusside is seen within a minute or two after the start of an adequate infusion, and it dissipates almost as rapidly after an infusion is discontinued. The effect is augmented by ganglionic blocking agents and inhaled anesthetics.

Infused sodium nitroprusside is rapidly distributed to a volume that is approximately coextensive with the extracellular space. The drug is cleared by intraerythrocytic reaction with hemoglobin (Hgb), and sodium nitroprusside’s resulting circulatory half-life is about 2 minutes.

As shown in the diagram below, the essential features of nitroprusside metabolism are: 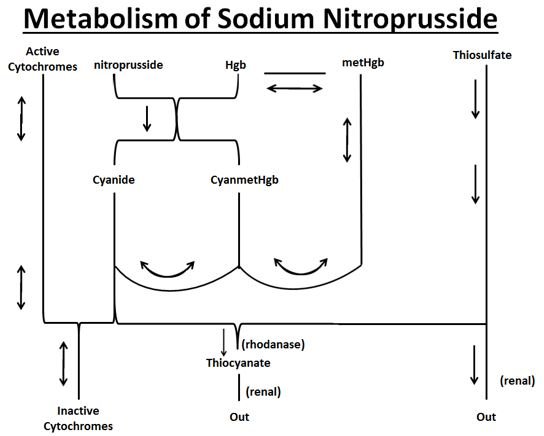 Cyanide ion is normally found in serum; it is derived from dietary substrates and from tobacco smoke. CN¯ levels in packed erythrocytes are typically less than 1 μmol/L (less than 25 mcg/L); levels are roughly doubled in heavy smokers.

At healthy steady state, most people have less than 1% of their hemoglobin in the form of methemoglobin. Nitroprusside metabolism can lead to methemoglobin formation. Relatively large quantities of sodium nitroprusside, however, are required to produce significant methemoglobinemia.

At physiologic methemoglobin levels, the CN¯ binding capacity of packed red cells is a little less than 200 μmol/L (5 mg/L). Cytochrome toxicity is seen at levels only slightly higher, and death has been reported at levels from 300 to 3000 μmol/L (8–80 mg/L). A patient with a normal redcell mass (35 mL/kg) and normal methemoglobin levels can buffer about 175 mcg/kg of CN¯, corresponding to a little less than 500 mcg/kg of infused sodium nitroprusside.

Thiocyanate (SCN¯) is a normal physiological constituent of serum, with normal levels typically in the range of 50-250 μmol/L (3-15 mg/L). Clearance of SCN¯ is primarily renal. In renal failure, the half-life can be doubled or tripled.

When thiosulfate is being supplied only by normal physiologic mechanisms, conversion of CN¯ to SCN¯ generally proceeds at about 1 mcg/kg/min. This rate of CN¯ clearance corresponds to steady-state processing of a sodium nitroprusside infusion of slightly more than 2 mcg/kg/min. CN¯ begins to accumulate when sodium nitroprusside infusions exceed this rate.

Clinical trials have also shown that the hypotensive effect of sodium nitroprusside is associated with reduced blood loss in a variety of major surgical procedures.

There were 203 pediatric patients in a parallel, dose-ranging study (Study 1). During the 30-minute blinded phase, patients were randomized 1:1:1:1 to receive sodium nitroprusside 0.3, 1, 2, or 3 mcg/kg/min. The infusion rate was increased step-wise to the target dose rate (i.e., 1/3 of the full rate for the first 5 minutes, 2/3 of the full rate for the next 5 minutes, and the full dose rate for the last 20 minutes). If the investigator believed that an increase to the next higher dose rate would be unsafe, the infusion remained at the current rate for the remainder of the blinded infusion. Since there was no placebo group, the change from baseline likely overestimates the true magnitude of blood pressure effect. Nevertheless, MAP decreased 11 to 20 mmHg from baseline across the four doses (Table 1).

There were 63 pediatric patients in a long-term infusion trial (Study 2). During an open-label phase (12 to 24 hours), sodium nitroprusside was started at 0.3 mcg/kg/min and titrated according to the BP response.

In both studies, similar effects on MAP were seen in all age groups.

To protect NIPRIDE®RTU from light, vial should be stored in its carton until used.

Inform female patients of reproductive potential that Sodium Nitroprusside Injection may cause fetal harm and to inform their prescriber of a known or suspected pregnancy [see Use in Specific Population (8.1)].

Manufactured and Distributed by: 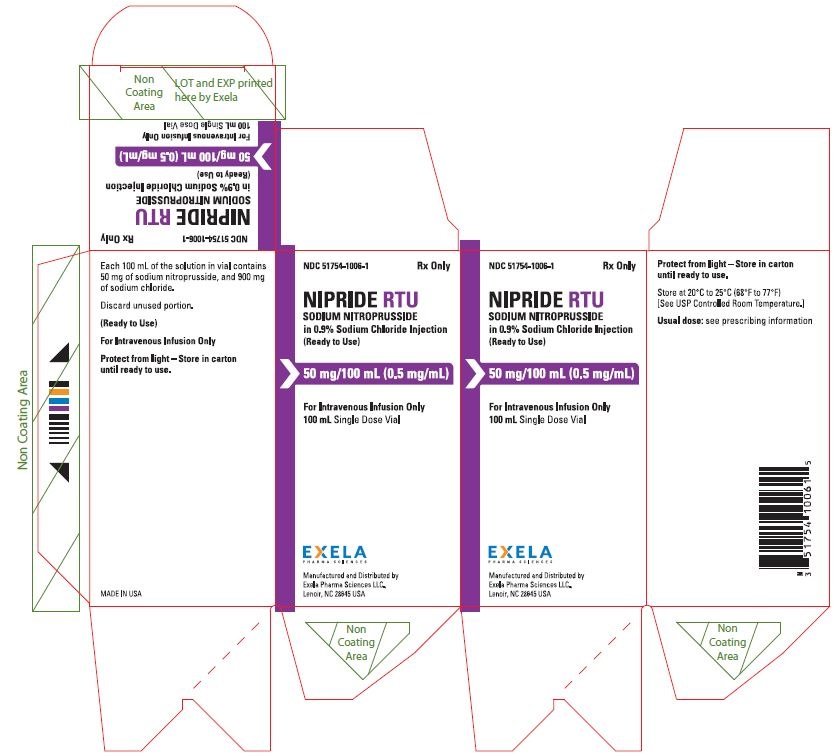 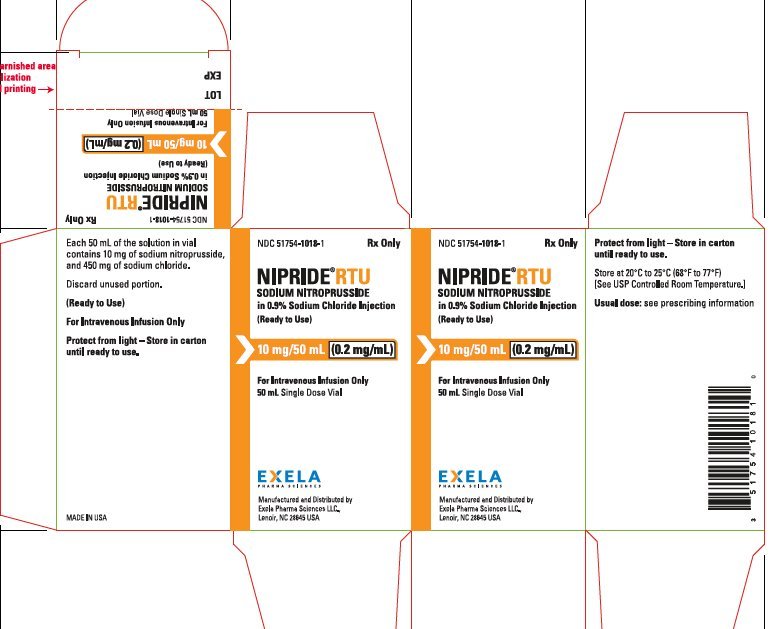 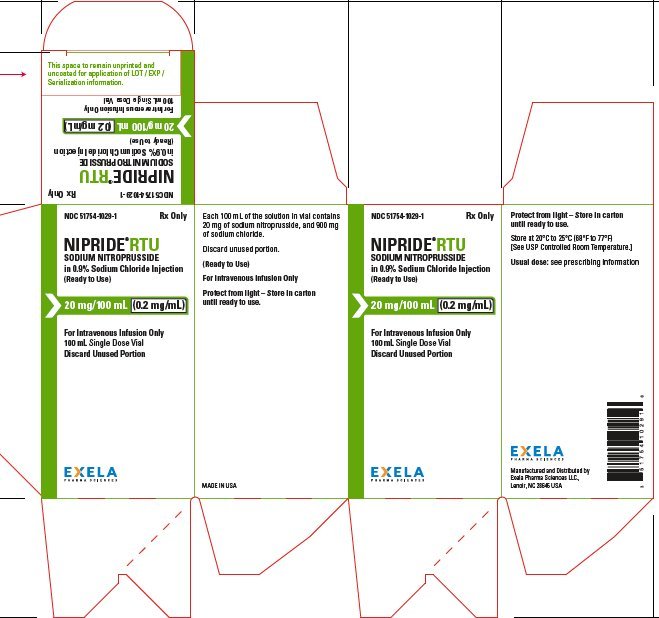