Neomycin and Polymyxin B Sulfates, Bacitracin Zinc and Hydrocortisone Ophthalmic Ointment, USP is a sterile antimicrobial and anti-inflammatory ointment for ophthalmic use.

Neomycin sulfate is the sulfate salt of neomycin B and C, which are produced by the growth of Streptomyces fradiae Waksman (Fam. Streptomycetaceae). It has a potency equivalent of not less than 600 mcg of neomycin standard per mg, calculated on an anhydrous basis. 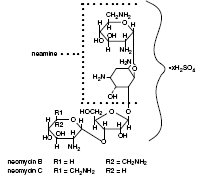 Polymyxin B sulfate is the sulfate salt of polymyxin B1 and B2, which are produced by the growth of Bacillus polymyxa (Prazmowski) Migula (Fam. Bacillaceae). It has a potency of not less than 6,000 polymyxin B units per mg, calculated on an anhydrous basis.

Bacitracin zinc is the zinc salt of bacitracin, a mixture of related cyclic polypeptides (mainly bacitracin A) produced by the growth of an organism of the licheniformis group of Bacillus subtilis var Tracy. It has a potency of not less than 40 bacitracin units per mg. 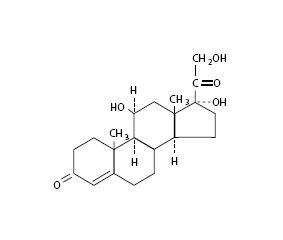 Corticosteroids suppress the inflammatory response to a variety of agents and they probably delay or slow healing. Since corticosteroids may inhibit the body’s defense mechanism against infection, concomitant antimicrobial drugs may be used when this inhibition is considered to be clinically significant in a particular case.

When a decision to administer both a corticosteroid and antimicrobials is made, the administration of such drugs in combination has the advantage of greater patient compliance and convenience, with the added assurance that the appropriate dosage of all drugs is administered. When each type of drug is in the same formulation, compatibility of ingredients is assured and the correct volume of drug is delivered and retained.

The relative potency of corticosteroids depends on the molecular structure, concentration and release from the vehicle.

The anti-infective components in neomycin and polymyxin B sulfates, bacitracin zinc and hydrocortisone ophthalmic ointment are included to provide action against specific organisms susceptible to it. Neomycin sulfate and polymyxin B sulfate are active in vitro against susceptible strains of the following microorganisms: Staphylococcus aureus, streptococci, including Streptococcus pneumoniae, Escherichia coli, Haemophilus influenzae, Klebsiella-Enterobacter species, Neisseria species, and Pseudomonas aeruginosa. This product does not provide adequate coverage against Serratia marcescens (see INDICATIONS AND USAGE).

Ocular corticosteroids are indicated in inflammatory conditions of the palpebral and bulbar conjunctiva, cornea, and anterior segment of the globe where the inherent risk of corticosteroid use in certain infective conjunctivitides is accepted to obtain a diminution in edema and inflammation. They are also indicated in chronic anterior uveitis and corneal injury from chemical, radiation, or thermal burns, or penetration of foreign bodies.

The use of a combination drug with an anti-infective component is indicated where the risk of infection is high or where there is an expectation that potentially dangerous numbers of bacteria will be present in the eye (see CLINICAL PHARMACOLOGY: Microbiology).

Neomycin and polymyxin B sulfates, bacitracin zinc and hydrocortisone ophthalmic ointment is contraindicated in most viral diseases of the cornea and conjunctiva including: epithelial herpes simplex keratitis (dendritic keratitis), vaccinia and varicella, and also in mycobacterial infection of the eye and fungal diseases of ocular structures.

NOT FOR INJECTION INTO THE EYE. Neomycin and polymyxin B sulfates, bacitracin zinc and hydrocortisone ophthalmic ointment should never be directly introduced into the anterior chamber of the eye. Ophthalmic ointments may retard corneal wound healing. Prolonged use of corticosteroids may result in ocular hypertension and/or glaucoma, with damage to the optic nerve, defects in visual acuity and fields of vision, and in posterior subcapsular cataract formation.

Prolonged use may suppress the host response and thus increase the hazard of secondary ocular infections. In those diseases causing thinning of the cornea or sclera, perforations have been known to occur with the use of topical corticosteroids. In acute purulent conditions of the eye, corticosteroids may mask infection or enhance existing infection.

If these products are used for 10 days or longer, intraocular pressure should be routinely monitored even though it may be difficult in uncooperative patients. Corticosteroids should be used with caution in the presence of glaucoma.

The use of corticosteroids after cataract surgery may delay healing and increase the incidence of filtering blebs.

Topical antibiotics, particularly neomycin sulfate, may cause cutaneous sensitization. A precise incidence of hypersensitivity reactions (primarily skin rash) due to topical antibiotics is not known. The manifestations of sensitization to topical antibiotics are usually itching, reddening, and edema of the conjunctiva and eyelid. A sensitization reaction may manifest simply as a failure to heal. During long-term use of topical antibiotic products, periodic examination for such signs is advisable, and the patient should be told to discontinue the product if they are observed. Symptoms usually subside quickly on withdrawing the medication. Applications of products containing these ingredients should be avoided for the patient thereafter (see PRECAUTIONS: General).

The initial prescription and renewal of the medication order beyond 8 grams should be made by a physician only after examination of the patient with the aid of magnification, such as slit lamp biomicroscopy and, where appropriate, fluorescein staining. If signs and symptoms fail to improve after two days, the patient should be re-evaluated.

The possibility of fungal infections of the cornea should be considered after prolonged corticosteroid dosing. Fungal cultures should be taken when appropriate.

If this product is used for 10 days or longer, intraocular pressure should be monitored (see WARNINGS).

There have been reports of bacterial keratitis associated with the use of topical ophthalmic products in multiple-dose containers which have been inadvertently contaminated by patients, most of whom had a concurrent corneal disease or a disruption of the ocular epithelial surface (see PRECAUTIONS: Information for Patients).

Patients should also be instructed that ocular products, if handled improperly, can become contaminated by common bacteria known to cause ocular infections. Serious damage to the eye and subsequent loss of vision may result from using contaminated products (see PRECAUTIONS: General).

If the condition persists or gets worse, or if a rash or allergic reaction develops, the patient should be advised to stop use and consult a physician. Do not use this product if you are allergic to any of the listed ingredients.

Keep tightly closed when not in use. Keep out of the reach of children.

Long-term studies in animals to evaluate carcinogenic or mutagenic potential have not been conducted with polymyxin B sulfate or bacitracin. Treatment of cultured human lymphocytes in vitro with neomycin increased the frequency of chromosome aberrations at the highest concentration (80 mcg /mL) tested; however, the effects of neomycin on carcinogenesis and mutagenesis in humans are unknown.

Pregnancy Category C. Corticosteroids have been found to be teratogenic in rabbits when applied topically at concentrations of 0.5% on days 6 to 18 of gestation and in mice when applied topically at a concentration of 15% on days 10 to 13 of gestation. There are no adequate and well-controlled studies in pregnant women. Neomycin and polymyxin B sulfates, bacitracin zinc and hydrocortisone ophthalmic ointment should be used during pregnancy only if the potential benefit justifies the potential risk to the fetus.

It is not known whether topical administration of corticosteroids could result in sufficient systemic absorption to produce detectable quantities in human milk. Systemically administered corticosteroids appear in human milk and could suppress growth, interfere with endogenous corticosteroid production, or cause other untoward effects. Because of the potential for serious adverse reactions in nursing infants from neomycin and polymyxin B sulfates, bacitracin zinc and hydrocortisone ophthalmic ointment, a decision should be made whether to discontinue nursing or to discontinue the drug, taking into account the importance of the drug to the mother.

Reactions occurring most often from the presence of the anti-infective ingredient are allergic sensitization reactions including itching, swelling and conjunctival erythema (see WARNINGS). More serious hypersensitivity reactions, including anaphylaxis, have been reported rarely.

The reactions due to the corticosteroid component in decreasing order of frequency are: elevation of intraocular pressure (IOP) with possible development of glaucoma, and infrequent optic nerve damage; posterior subcapsular cataract formation; and delayed wound healing.

The development of secondary infection has occurred after use of combinations containing corticosteroids and antimicrobials. Fungal and viral infections of the cornea are particularly prone to develop coincidentally with long-term applications of a corticosteroid. The possibility of fungal invasion must be considered in any persistent corneal ulceration where corticosteroid treatment has been used.

Apply the ointment in the affected eye every 3 or 4 hours, depending on the severity of the condition.

Not more than 8 grams should be prescribed initially and the prescription should not be refilled without further evaluation as outlined in PRECAUTIONS: above.

Neomycin and Polymyxin B Sulfates, Bacitracin Zinc and Hydrocortisone Ophthalmic Ointment, USP is supplied in a tube with ophthalmic tip applicator in the following size:

DO NOT USE IF CAP AND NECKRING ARE NOT INTACT.

FOR OPHTHALMIC USE ONLY 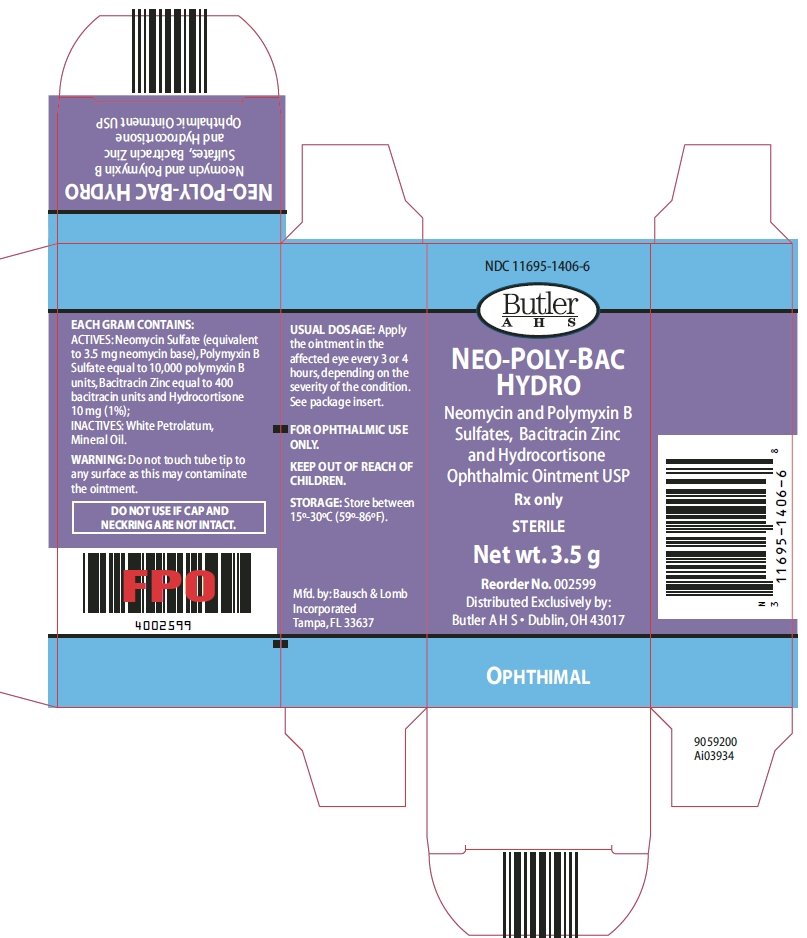