Mytesi is indicated for symptomatic relief of non-infectious diarrhea in adult patients with HIV/AIDS on anti-retroviral therapy.

Before starting Mytesi, rule out infectious etiologies of diarrhea [see Warnings and Precautions (5.1)]. The recommended adult dosage of Mytesi is 125 mg taken orally two times a day, with or without food. Do not crush or chew Mytesi tablets. Swallow whole.

Delayed-Release Tablets: 125 mg of crofelemer as a white, oval, delayed-release tablet printed on one side with 125SLXP.

5. 1 Risks of Treatment in Patients with Infectious Diarrhea

Adverse reactions in patients treated with Mytesi 125 mg twice daily that occurred in at least 2% of patients and at a higher incidence than placebo are provided in Table 1.

Mytesi administration did not have a clinically relevant interaction with nelfinavir, zidovudine, or lamivudine in a drug-drug interaction trial [see Clinical Pharmacology (12.3)].

Crofelemer is minimally absorbed systemically by the oral route of administration and maternal use is not expected to result in fetal exposure to the drug [see Clinical Pharmacology (12.3)].

In pregnant rats, no adverse fetal effects were observed with oral administration of crofelemer at doses up to 177 times the recommended clinical dose during the period of organogenesis. In pregnant rabbits, an increase in fetal resorptions and abortions compared to controls were observed with crofelemer at a dose of 96 times the recommended clinical dose. However, it is not clear whether these effects in rabbits are related to the maternal toxicity (decreased body weight and decreased food consumption) observed at this dose (see Data).

Crofelemer was not teratogenic and did not produce embryofetal toxicity in pregnant rats following oral administration at doses up to 738 mg/kg/day during the period of organogenesis. The 738 mg/kg/day dose is 177 times the recommended daily human dose of 4.2 mg/kg/day.

Crofelemer was not teratogenic in pregnant rabbits following oral administration at doses up to 400 mg/kg/day during the period of organogenesis. At a dose level of 400 mg/kg/day, which is 96 times the recommended daily human dose of 4.2 mg/kg/day, crofelemer produced an increase in fetal resorptions and abortions compared to controls. However, it is not clear whether these effects are related to the maternal toxicity (decreased body weight and decreased food consumption) observed.

The Centers for Disease Control and Prevention recommend that HIV-1 infected mothers not breastfeed their infants to avoid risking postnatal transmission of HIV-1.

The safety and effectiveness of Mytesi have not been established in pediatric patients.

Clinical studies with Mytesi did not include sufficient numbers of patients aged 65 and over to determine whether they respond differently than younger patients.

8.6 Use in Patients with Low CD4 Counts and High Viral Loads

Mytesi (crofelemer) delayed-release tablets is an anti-diarrheal, enteric-coated drug product for oral administration. It contains 125 mg of crofelemer, a botanical drug substance that is derived from the red latex of Croton lechleri Müll. Arg. Crofelemer is an oligomeric proanthocyanidin mixture primarily composed of (+)–catechin, (–)–epicatechin, (+)–gallocatechin, and (–)–epigallocatechin monomer units linked in random sequence, as represented below. The average degree of polymerization for the oligomers ranges between 5 and 7.5, as determined by phloroglucinol degradation. 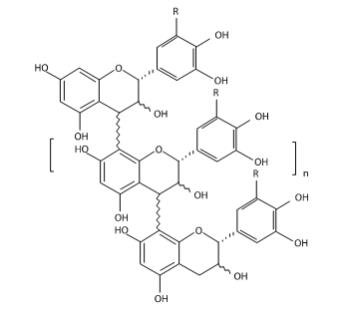 Crofelemer is an inhibitor of both the cyclic adenosine monophosphate (cAMP)-stimulated cystic fibrosis transmembrane conductance regulator (CFTR) chloride ion (Cl¯) channel, and the calcium-activated Cl¯ channels (CaCC) at the luminal membrane of enterocytes. The CFTR Cl¯ channel and CaCC regulate Cl¯ and fluid secretion by intestinal epithelial cells. Crofelemer acts by blocking Cl¯ secretion and accompanying high volume water loss in diarrhea, normalizing the flow of Cl¯ and water in the gastrointestinal tract.

At a dose 10 times the maximum recommended dose, crofelemer does not prolong the QTc interval to any clinically relevant extent.

The absorption of crofelemer is minimal following oral dosing in healthy adults and HIV–positive patients and concentrations of crofelemer in plasma are below the level of quantitation (50 ng/mL). Therefore, standard pharmacokinetic parameters such as area under the curve, maximum concentration, and half-life cannot be estimated.

Administration of crofelemer with a high-fat meal was not associated with an increase in systemic exposure of crofelemer in healthy subjects. In the clinical trial, a single 500 mg dose of crofelemer (4-times the recommended dose) was administered one-half hour before the morning and evening meals [see Dosage and Administration (2)].

In vitro studies have shown that crofelemer has the potential to inhibit transporters MRP2 and OATP1A2 but not P-gp and BCRP at concentrations expected in the gut.

Results of a crossover study in healthy subjects showed crofelemer 500 mg administered four times daily (8- times the recommended daily dosage) for five days had no effect on the exposure of zidovudine and nelfinavir when administered as a single dose. A 20% decrease in lamivudine exposure was also observed in the same study but was not considered to be clinically important.

In vitro studies have shown that crofelemer has the potential to inhibit CYP3A4 enzymes at concentrations expected in the gut. The effects of crofelemer on the pharmacokinetics of a single oral dose of 2 mg midazolam, a sensitive CYP3A4 substrate, was evaluated in healthy subjects following crofelemer dosed orally at 500 mg twice daily (4-times the recommended dosage) for six consecutive days. No significant changes in the mean Cmax and AUC were observed for midazolam and its active metabolite, hydroxymidazolam after co- administration with crofelemer compared to that after administration of midazolam alone.

In a 6-month carcinogenicity study in Tg.rasH2 transgenic mice, crofelemer at oral doses up to 125 mg/kg twice a day (250 mg/kg/day) did not produce any drug-related neoplasms in male and female animals. The 250 mg/kg/day dose is about 60 times the recommended clinical dose of 4.2 mg/kg/day (125 mg twice daily).

Crofelemer, at oral doses of up to 738 mg/kg/day (177 times the recommended human daily dose of 125 mg twice daily), had no effects on fertility or reproductive performance of male and female rats.

The efficacy of Mytesi was evaluated in a randomized, double-blind, placebo-controlled (one month) and placebo-free (five month), multi-center study. The study enrolled 374 HIV-positive patients on stable anti-retroviral therapy with a history of diarrhea for one month or more. Diarrhea was defined as either persistently loose stools despite regular use of anti-diarrheal medication (e.g., loperamide, diphenoxylate, and bismuth subsalicylate) or one or more watery bowel movements per day without regular anti-diarrheal medicine use.

The study had a two-stage adaptive design. In both stages, patients received placebo for 10 days (screening period) followed by randomization to crofelemer or placebo for 31 days of treatment (double-blind period). Only patients with 1 or more watery bowel movements per day on at least 5 of the last 7 days in the screening period were randomized to the double-blind period. Each stage enrolled patients separately; the dose for the second stage was selected based on an interim analysis of data from the first stage. In the first stage, patients were randomized 1:1:1:1 to one of three crofelemer dosage regimens (125 mg twice daily, or one of two higher dosage regimens) or placebo. In the second stage, patients were randomized 1:1 to Mytesi 125 mg twice daily or placebo. The efficacy analysis was based on results from the double-blind portion of both stages.

The median time since diagnosis of HIV was 12 years. The percentage of patients with a CD4 cell count of less than 404 was 39%. The percentage of patients with a HIV viral load greater than or equal to 1000, 400 to 999, and less than 400 HIV copies/mL was 7%, 3%, and 9%, respectively; the remainder had a viral load that was not detectable. The median time since diarrhea started was 4 years. The median number of daily watery bowel movements was 2.5 per day.

Most patients received concomitant protease inhibitors during the double-blind period (Table 2). The most frequently used anti-retroviral therapies in the Mytesi 125 mg and placebo groups were tenofovir/emtricitabine, ritonavir, and lopinavir/ritonavir.

The primary efficacy endpoint was the proportion of patients with a clinical response, defined as less than or equal to 2 watery bowel movements per week during at least 2 of the 4 weeks of the placebo-controlled phase. Patients who received concomitant anti-diarrheal medications or opiates were counted as clinical non-responders.

A significantly larger proportion of patients in the Mytesi 125 mg twice daily group experienced clinical response compared with patients in the placebo group (18% vs. 8%, 1–sided p < 0.01). In the randomized clinical study, examination of duration of diarrhea, baseline number of daily watery bowel movements, use of protease inhibitors, CD4 cell count and age subgroups did not identify differences in the consistency of the crofelemer treatment effect among these subgroups. There were too few female patients and patients with an HIV viral load > 400 copies/mL to adequately assess differences in effects in these populations. Among race subgroups, there were no differences in the consistency of the crofelemer treatment effect except for the subgroup of African-Americans; crofelemer was less effective in African-Americans than non-African-Americans.

Manufactured by Patheon, Inc. for

The botanical drug substance of Mytesi is extracted from Croton lechleri (the botanical raw material) that is harvested from the wild in South America.