Pentosan polysulfate sodium is a semi-synthetically produced heparin-like macromolecular carbohydrate derivative, which chemically and structurally resembles glycosaminoglycans. It is a white odorless powder, slightly hygroscopic and soluble in water to 50% at pH 6. It has a molecular weight of 4000 to 6000 Dalton with the following structural formula:

In a clinical pharmacology study in which healthy female volunteers received a single oral 300 or 450 mg dose of pentosan polysulfate sodium containing radiolabeled drug as a solution under fasted conditions, maximal levels of plasma radioactivity were seen approximately at a median of 2 hours (range 0.6-120 hours) after dosing. Based on urinary excretion of radioactivity, a mean of approximately 6% of a radiolabeled oral dose of pentosan polysulfate sodium is absorbed and reaches the systemic circulation.

Food Effects: In clinical trials, Elmiron® was administered with water 1 hour before or 2 hours after meals; the effect of food on absorption of pentosan polysulfate sodium is not known.

Following administration of an oral solution of a 300 or 450 mg dose of pentosan polysulfate sodium containing radiolabeled drug to groups of healthy subjects, plasma radioactivity declined with mean half-lives of 27 and 20 hours, respectively. A large proportion of the orally administered dose of pentosan polysulfate sodium (mean 84% in the 300 mg group and 58% in the 450 mg group) is excreted in feces as unchanged drug. A mean of 6% of an oral dose is excreted in the urine, mostly as desulfated and depolymerized metabolites. Only a small fraction of the administered dose (mean 0.14%) is recovered as intact drug in urine.

The pharmacokinetics of pentosan polysulfate sodium has not been studied in geriatric patients or in patients with hepatic or renal impairment. See also PRECAUTIONS-Hepatic Insufficiency.

Elmiron® was evaluated in two clinical trials for the relief of pain in patients with chronic interstitial cystitis (IC). All patients met the NIH definition of IC based upon the results of cystoscopy, cytology, and biopsy. One blinded, randomized, placebo-controlled study evaluated 151 patients (145 women, 5 men, 1 unknown) with a mean age of 44 years (range 18 to 81). Approximately equal numbers of patients received either placebo or Elmiron® 100 mg three times a day for 3 months. Clinical improvement in bladder pain was based upon the patient's own assessment. In this study, 28/74 (38%) of patients who received Elmiron® and 13/74 (18%) of patients who received placebo showed greater than 50% improvement in bladder pain (p = 0.005).

Patients had unblinded evaluations every 3 months for the patient's rating of overall change in pain in comparison to baseline and for the difference calculated in "pain/discomfort" scores. At baseline, pain/discomfort scores for the original 2499 patients were severe or unbearable in 60%, moderate in 33% and mild or none in 7% of patients. The extent of the patients' pain improvement is shown in Table 1.

Indications and Usage for Elmiron

Elmiron® (pentosan polysulfate sodium) is indicated for the relief of bladder pain or discomfort associated with interstitial cystitis.

Elmiron® is contraindicated in patients with known hypersensitivity to the drug, structurally related compounds, or excipients.

Pigmentary changes in the retina, reported in the literature as pigmentary maculopathy, have been identified with long-term use of Elmiron® (see ADVERSE REACTIONS). Although most of these cases occurred after 3 years of use or longer, cases have been seen with a shorter duration of use. While the etiology is unclear, cumulative dose appears to be a risk factor. Visual symptoms in the reported cases included difficulty reading, slow adjustment to low or reduced light environments, and blurred vision. The visual consequences of these pigmentary changes are not fully characterized. Caution should be used in patients with retinal pigment changes from other causes in which examination findings may confound the appropriate diagnosis, follow-up, and treatment. Detailed ophthalmologic history should be obtained in all patients prior to starting treatment with Elmiron®. If there is a family history of hereditary pattern dystrophy, genetic testing should be considered. For patients with pre-existing ophthalmologic conditions, a comprehensive baseline retinal examination (including color fundoscopic photography, ocular coherence tomography (OCT), and auto-fluorescence imaging) is recommended prior to starting therapy. A baseline retinal examination (including OCT and auto-fluorescence imaging) is suggested for all patients within six months of initiating treatment and periodically while continuing treatment. If pigmentary changes in the retina develop, then risks and benefits of continuing treatment should be re-evaluated, since these changes may be irreversible. Follow-up retinal examinations should be continued given that retinal and vision changes may progress even after cessation of treatment.

Elmiron® is a weak anticoagulant (1/15 the activity of heparin). At a daily dose of 300 mg (n=128), rectal hemorrhage was reported as an adverse event in 6.3% of patients. Bleeding complications of ecchymosis, epistaxis, and gum hemorrhage have been reported (see ADVERSE REACTIONS). Patients undergoing invasive procedures or having signs/symptoms of underlying coagulopathy or other increased risk of bleeding (due to other therapies such as coumarin anticoagulants, heparin, t-PA, streptokinase, high dose aspirin, or nonsteroidal anti-inflammatory drugs) should be evaluated for hemorrhage. Patients with diseases such as aneurysms, thrombocytopenia, hemophilia, gastrointestinal ulcerations, polyps, or diverticula should be carefully evaluated before starting Elmiron®.

A similar product that was given subcutaneously, sublingually, or intramuscularly (and not initially metabolized by the liver) is associated with delayed immunoallergic thrombocytopenia with symptoms of thrombosis and hemorrhage. Caution should be exercised when using Elmiron® in patients who have a history of heparin induced thrombocytopenia.

Alopecia is associated with pentosan polysulfate and with heparin products. In clinical trials of Elmiron®, alopecia began within the first 4 weeks of treatment. Ninety-seven percent (97%) of the cases of alopecia reported were alopecia areata, limited to a single area on the scalp.

Elmiron® has not been studied in patients with hepatic insufficiency. Because there is evidence of hepatic contribution to the elimination of Elmiron®, hepatic impairment may have an impact on the pharmacokinetics of Elmiron®. Caution should be exercised when using Elmiron® in this patient population.

Mildly (< 2.5 × normal) elevated transaminase, alkaline phosphatase, γ-glutamyl transpeptidase, and lactic dehydrogenase occurred in 1.2% of patients. The increases usually appeared 3 to 12 months after the start of Elmiron® therapy, and were not associated with jaundice or other clinical signs or symptoms. These abnormalities are usually transient, may remain essentially unchanged, or may rarely progress with continued use. Increases in PTT and PT (< 1% for both) or thrombocytopenia (0.2%) were noted.

Patients should take the drug as prescribed, in the dosage prescribed, and no more frequently than prescribed.

Patients should be informed that changes in vision should be reported and evaluated. Retinal examinations including optical coherence tomography (OCT) and auto-fluorescence imaging are suggested for all patients within six months of starting Elmiron® and periodically during long-term treatment (see WARNINGS).

Patients should be reminded that Elmiron® has a weak anticoagulant effect. This effect may increase bleeding times.

Long-term carcinogenicity studies of Elmiron® in F344/N rats and B6C3F1 mice have been conducted. In these studies, Elmiron® was orally administered once daily via gavage, 5 days per week, for up to 2 years. The dosages administered to mice were 56, 168 or 504 mg/kg. The dosages administered to rats were 14, 42, or 126 mg/kg for males, and 28, 84, or 252 mg/kg for females. The dosages tested were up to 60 times the maximum recommended human dose (MRHD) in rats, and up to 117 times the MRHD in mice, on a mg/kg basis. The results of these studies in rodents showed no clear evidence of drug-related tumorigenesis or carcinogenic risk.

Reproduction studies have been performed in mice and rats with intravenous daily doses of 15 mg/kg, and in rabbits with 7.5 mg/kg. These doses are 0.42 and 0.14 times the daily oral human doses of Elmiron® when normalized to body surface area. These studies did not reveal evidence of impaired fertility or harm to the fetus from Elmiron®. Direct in vitro bathing of cultured mouse embryos with pentosan polysulfate sodium (PPS) at a concentration of 1 mg/mL may cause reversible limb bud abnormalities. Adequate and well-controlled studies have not been performed in pregnant women. Because animal studies are not always predictive of human response, this drug should be used in pregnancy only if clearly needed.

Safety and effectiveness in pediatric patients below the age of 16 years have not been established.

Deaths occurred in 6/2627 (0.2%) patients who received the drug over a period of 3 to 75 months. The deaths appear to be related to other concurrent illnesses or procedures, except in one patient for whom the cause was not known.

Serious adverse events occurred in 33/2627 (1.3%) patients. Two patients had severe abdominal pain or diarrhea and dehydration that required hospitalization. Because there was not a control group of patients with interstitial cystitis who were concurrently evaluated, it is difficult to determine which events are associated with Elmiron® and which events are associated with concurrent illness, medicine, or other factors.

The following adverse reactions have been identified during post approval use of pentosan polysulfate sodium; because these reactions were reported voluntarily from a population of uncertain size, it is not always possible to reliably estimate their frequency or establish a causal relationship to drug exposure:

Elmiron® was evaluated in a randomized, double-blind, parallel group, Phase 4 study conducted in 380 patients with interstitial cystitis dosed for 32 weeks. At a daily dose of 300 mg (n=128), rectal hemorrhage was reported as an adverse event in 6.3% of patients. The severity of the events was described as "mild" in most patients. Patients in that study who were administered Elmiron® 900 mg daily, a dose higher than the approved dose, experienced a higher incidence of rectal hemorrhage, 15%.

A randomized, double-blind, parallel group, Phase 2 study was conducted in 100 men (51 Elmiron® and 49 placebo) dosed for 16 weeks. At a daily dose of 900 mg, a dose higher than the approved dose, elevated liver function tests were reported as an adverse event in 11.8% (n=6) of Elmiron®-treated patients and 2% (n=1) of placebo-treated patients.

The recommended dose of Elmiron® is 300 mg/day taken as one 100 mg capsule orally three times daily. The capsules should be taken with water at least 1 hour before meals or 2 hours after meals.

Patients receiving Elmiron® should be reassessed after 3 months. If improvement has not occurred and if limiting adverse events are not present, Elmiron® may be continued for another 3 months.

The clinical value and risks of continued treatment in patients whose pain has not improved by 6 months is not known.

How is Elmiron Supplied

Attention: Dispense the enclosed
Medication Guide to each patient. 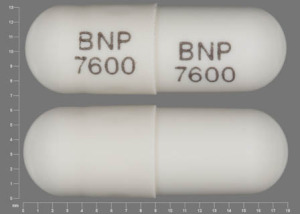