For Dermatologic Use Only—Not for Ophthalmic Use.

Chemically, fluticasone propionate is C25H31F3O5S. It has the following structural formula: 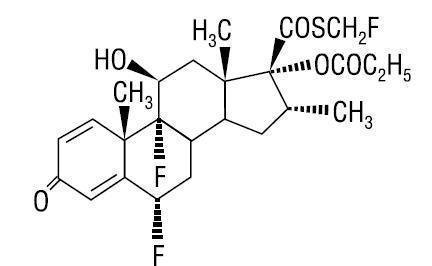 Fluticasone propionate has a molecular weight of 500.6. It is a white to off-white powder and is insoluble in water.

Like other topical corticosteroids, fluticasone propionate has anti-inflammatory, antipruritic, and vasoconstrictive properties. The mechanism of the anti-inflammatory activity of the topical steroids, in general, is unclear. However, corticosteroids are thought to act by the induction of phospholipase A2 inhibitory proteins, collectively called lipocortins. It is postulated that these proteins control the biosynthesis of potent mediators of inflammation such as prostaglandins and leukotrienes by inhibiting the release of their common precursor, arachidonic acid. Arachidonic acid is released from membrane phospholipids by phospholipase A2.

Studies performed with CUTIVATE® Cream indicate that it is in the medium range of potency as compared with other topical corticosteroids.

Absorption: The activity of CUTIVATE® is due to the parent drug, fluticasone propionate. The extent of percutaneous absorption of topical corticosteroids is determined by many factors, including the vehicle and the integrity of the epidermal barrier. Occlusive dressing enhances penetration. Topical corticosteroids can be absorbed from normal intact skin. Inflammation and/or other disease processes in the skin increase percutaneous absorption.

CUTIVATE® Cream is a medium potency corticosteroid indicated for the relief of the inflammatory and pruritic manifestations of corticosteroid-responsive dermatoses. CUTIVATE® Cream may be used with caution in pediatric patients 3 months of age or older. The safety and efficacy of drug use for longer than 4 weeks in this population have not been established. The safety and efficacy of CUTIVATE® Cream in pediatric patients below 3 months of age have not been established.

CUTIVATE® Cream is contraindicated in those patients with a history of hypersensitivity to any of the components in the preparation.

Patients applying a potent topical steroid to a large surface area or to areas under occlusion should be evaluated periodically for evidence of HPA axis suppression. This may be done by using the ACTH stimulation, A.M. plasma cortisol, and urinary free cortisol tests.

If HPA axis suppression is noted, an attempt should be made to withdraw the drug, to reduce the frequency of application, or to substitute a less potent steroid. Recovery of HPA axis function is generally prompt upon discontinuation of topical corticosteroids. Infrequently, signs and symptoms of glucocorticosteroid insufficiency may occur requiring supplemental systemic corticosteroids. For information on systemic supplementation, see prescribing information for those products.

There was some evidence of corresponding decrease in the 24-hour urinary free cortisol levels. The A.M. plasma cortisol level remained slightly depressed for 48 hours but recovered by day 6 of treatment.

Fluticasone propionate cream, 0.05%, caused HPA axis suppression in 2 of 43 pediatric patients, ages 2 and 5 years old, who were treated for 4 weeks covering at least 35% of the body surface area. Follow-up testing 12 days after treatment discontinuation, available for 1 of the 2 subjects, demonstrated a normally responsive HPA axis (see PRECAUTIONS: Pediatric Use).

Pediatric patients may be more susceptible to systemic toxicity from equivalent doses due to their larger skin surface to body mass ratios (see PRECAUTIONS: Pediatric Use).

Fluticasone propionate cream contains the excipient imidurea which releases traces of formaldehyde as a breakdown product. Formaldehyde may cause allergic sensitization or irritation upon contact with the skin.

If irritation develops, CUTIVATE® Cream should be discontinued and appropriate therapy instituted. Allergic contact dermatitis with corticosteroids is usually diagnosed by observing failure to heal rather than noting a clinical exacerbation as with most topical products not containing corticosteroids. Such an observation should be corroborated with appropriate diagnostic patch testing.

If concomitant skin infections are present or develop, an appropriate antifungal or antibacterial agent should be used. If a favorable response does not occur promptly, use of CUTIVATE® Cream should be discontinued until the infection has been adequately controlled.

Laboratory Tests: The following tests may be helpful in evaluating patients for HPA axis suppression:

Carcinogenesis, Mutagenesis, and Impairment of Fertility: Two 18-month studies were performed in mice to evaluate the carcinogenic potential of fluticasone propionate when given topically (as an 0.05% ointment) and orally. No evidence of carcinogenicity was found in either study.

In a fertility and general reproductive performance study in rats, fluticasone propionate administered subcutaneously to females at up to 50 mcg/kg per day and to males at up to 100 mcg/kg per day (later reduced to 50 mcg/kg per day) had no effect upon mating performance or fertility. These doses are approximately 15 and 30 times, respectively, the human systemic exposure following use of the recommended human topical dose of fluticasone propionate cream, 0.05%, assuming human percutaneous absorption of approximately 3% and the use in a 70-kg person of 15 g/day.

Teratogenic Effects: Pregnancy Category C. Corticosteroids have been shown to be teratogenic in laboratory animals when administered systemically at relatively low dosage levels. Some corticosteroids have been shown to be teratogenic after dermal application in laboratory animals. Teratology studies in the mouse demonstrated fluticasone propionate to be teratogenic (cleft palate) when administered subcutaneously in doses of 45 mcg/kg/day and 150 mcg/kg/day. This dose is approximately 14 and 45 times, respectively, the human topical dose of fluticasone propionate cream, 0.05%. There are no adequate and well-controlled studies in pregnant women. CUTIVATE® Cream should be used during pregnancy only if the potential benefit justifies the potential risk to the fetus.

Nursing Mothers: Systemically administered corticosteroids appear in human milk and could suppress growth, interfere with endogenous corticosteroid production, or cause other untoward effects. It is not known whether topical administration of corticosteroids could result in sufficient systemic absorption to produce detectable quantities in human milk. Because many drugs are excreted in human milk, caution should be exercised when CUTIVATE® Cream is administered to a nursing woman.

Pediatric Use: CUTIVATE® Cream may be used with caution in pediatric patients as young as 3 months of age. The safety and efficacy of drug use for longer than 4 weeks in this population have not been established. The safety and efficacy of CUTIVATE® Cream in pediatric patients below 3 months of age have not been established.

Fluticasone propionate cream, 0.05%, caused HPA axis suppression in 2 of 43 pediatric patients, ages 2 and 5 years old, who were treated for 4 weeks covering at least 35% of the body surface area. Follow-up testing 12 days after treatment discontinuation, available for 1 of the 2 subjects, demonstrated a normally responsive HPA axis (see ADVERSE REACTIONS). Adverse effects including striae have been reported with use of topical corticosteroids in pediatric patients.

Geriatric Use: A limited number of patients above 65 years of age (n = 126) have been treated with CUTIVATE® Cream in US and non-US clinical trials. While the number of patients is too small to permit separate analysis of efficacy and safety, the adverse reactions reported in this population were similar to those reported by younger patients. Based on available data, no adjustment of dosage of CUTIVATE® in geriatric patients is warranted.

In controlled clinical trials of twice-daily administration, the total incidence of adverse reactions associated with the use of CUTIVATE® Cream was approximately 4%. These adverse reactions were usually mild; self-limiting; and consisted primarily of pruritus, dryness, numbness of fingers, and burning. These events occurred in 2.9%, 1.2%, 1.0%, and 0.6% of patients, respectively.

Two clinical studies compared once- to twice-daily administration of CUTIVATE® Cream for the treatment of moderate to severe eczema. The local drug-related adverse events for the 491 patients enrolled in both studies are shown in Table 1. In the study enrolling both adult and pediatric patients, the incidence of local adverse events in the 119 pediatric patients ages 1 to 12 years was comparable to the 140 patients ages 13 to 62 years.

The following local adverse reactions have been reported infrequently with topical corticosteroids, and they may occur more frequently with the use of occlusive dressings and higher potency corticosteroids. These reactions are listed in an approximately decreas ing order of occurrence: irritation, folliculitis, acneiform eruptions, hypopigmentation, perioral dermatitis, allergic contact dermatitis, secondary infection, skin atrophy, striae, hypertrichosis and miliaria. Also, there are reports of the development of pustular psoriasis from chronic plaque psoriasis following reduction or discontinuation of potent topical corticosteroid products.

Atopic Dermatitis: Apply a thin film of CUTIVATE® Cream to the affected skin areas once or twice daily. Rub in gently.

Other Corticosteroid-Responsive Dermatoses: Apply a thin film of CUTIVATE® Cream to the affected skin areas twice daily. Rub in gently.

As with other corticosteroids, therapy should be discontinued when control is achieved. If no improvement is seen within 2 weeks, reassessment of diagnosis may be necessary.

Geriatric Use: In studies where geriatric patients (65 years of age or older, see PRECAUTIONS) have been treated with CUTIVATE® Cream, safety did not differ from that in younger patients; therefore, no dosage adjustment is recommended.

Psoriasis Studies: In 2 vehicle-controlled studies, CUTIVATE® Cream applied twice daily was significantly more effective than the vehicle in the treatment of moderate to severe psoriasis. The investigator's global evaluation after 28 days of treatment is shown in Table 3.

The clinical signs of psoriasis were scored on a scale of 0 = absent, 1 = mild, 2 = moderate, and 3 = severe. The mean improvements over baseline in the clinical signs at the end of treatment are shown in Table 4.

Atopic Dermatitis Studies: In 2 controlled 28-day studies, CUTIVATE® Cream once daily was equivalent to CUTIVATE® Cream twice daily in the treatment of moderate to severe eczema. The investigator's global evaluation after 28 days of treatment is shown in Table 5.

The clinical signs and symptoms of atopic dermatitis were scored on a scale of 0 = absent, 1 = mild, 2 = moderate, and 3 = severe. The mean improvements over baseline at the end of treatment are shown in Table 6.

For dermatologic use only - Not for ophthalmic use. 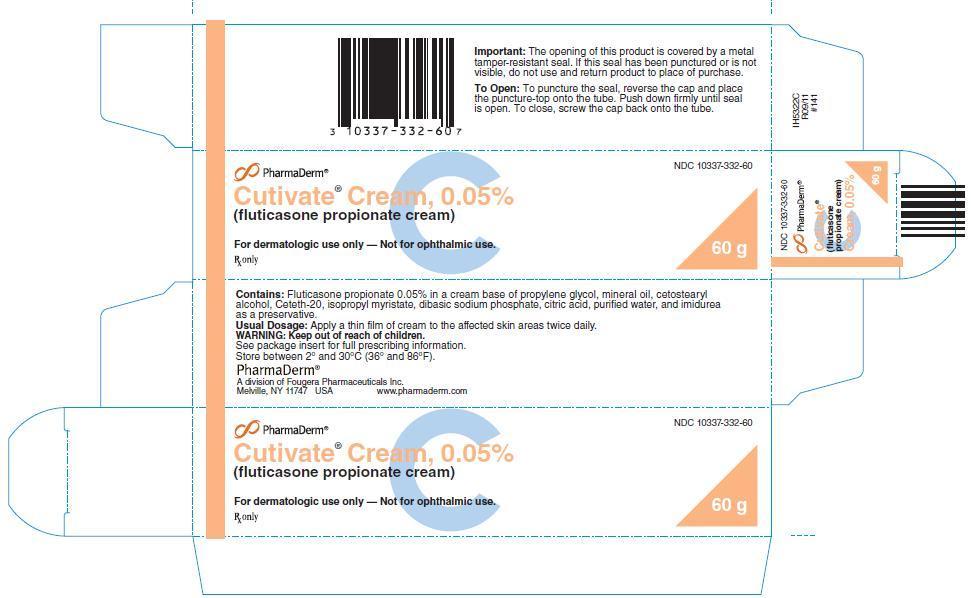 For dermatologic use only - Not for ophthalmic use. 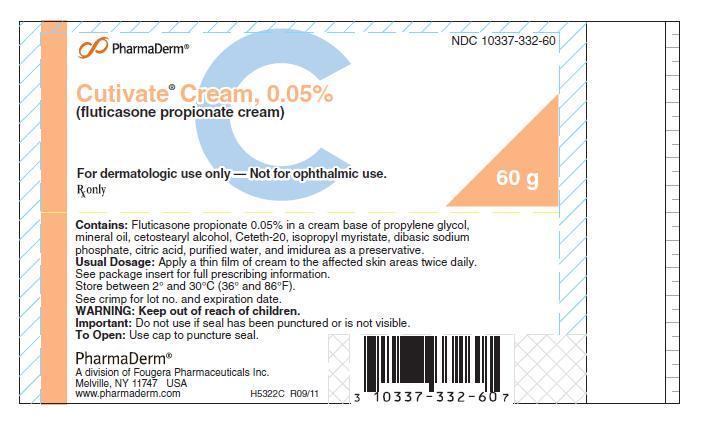