FOR INTRAMUSCULAR AND INTRAVENOUS INFUSION ONLY

NOT FOR PEDIATRIC USE

The use of Capreomycin for injection in patients with renal insufficiency or preexisting auditory impairment must be undertaken with great caution, and the risk of additional cranial nerve VIII impairment or renal injury should be weighed against the benefits to be derived from therapy.

Since other parenteral antituberculosis agents (streptomycin, viomycin) also have similar and sometimes irreversible toxic effects, particularly on cranial nerve VIII and renal function, simultaneous administration of these agents with Capreomycin for injection is not recommended. Use with nonantituberculosis drugs (polymyxin A sulfate, colistin sulfate, amikacin, gentamicin, tobramycin, vancomycin, kanamycin, and neomycin) having ototoxic or nephrotoxic potential should be undertaken only with great caution.

Usage in Pregnancy: The safety of the use of Capreomycin for injection in pregnancy has not been determined.

Pediatric Usage: Safety and effectiveness in pediatric patients have not been established.

Capreomycin Sulfate is a polypeptide antibiotic isolated from Streptomyces capreolus. It is a complex of 4 microbiologically active components which have been characterized in part; however, complete structural determination of all the components has not been established.

Capreomycin is supplied as the disulfate salt and is soluble in water. In complete solution, it is almost colorless.

Each vial contains the equivalent of 1 g Capreomycin activity. 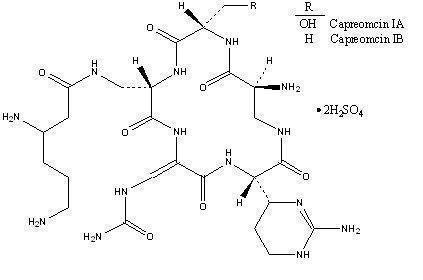 Capreomycin is not absorbed in significant quantities from the gastrointestinal tract and must be administered parenterally. In 2 studies of 10 patients each, peak serum concentrations following 1 g of Capreomycin given intramuscularly were achieved 1 to 2 hours after administration, and average peak levels reached were 28 and 32 mcg/mL respectively (range, 20 to 47 mcg/mL). Low serum concentrations were present at 24 hours. However, 1 g of Capreomycin daily for 30 days or more produced no significant accumulation in subjects with normal renal function. Two patients with marked reduction of renal function had high serum concentrations 24 hours after administration of the drug. When a 1-g dose of Capreomycin was given intramuscularly to normal volunteers, 52% was excreted in the urine within 12 hours.

Lehmann, et al, examined the pharmacokinetics of single dose Capreomycin (1.0 g) administered intramuscularly and by intravenous infusion (1 hour) in 6 healthy volunteers. The area under the serum concentration versus time curve was similar for the two routes of administration. Capreomycin peak concentrations after intravenous infusion were 30 ± 47% higher than after intramuscular administration. 1, 2

Capreomycin is active against strains of Mycobacterium tuberculosis found in humans.

Indications and Usage for Capreomycin

Capreomycin for injection, which is to be used concomitantly with other appropriate antituberculosis agents, is indicated in pulmonary infections caused by Capreomycin-susceptible strains of M. tuberculosis when the primary agents (isoniazid, rifampin, ethambutol, aminosalicylic acid, and streptomycin) have been ineffective or cannot be used because of toxicity or the presence of resistant tubercle bacilli.

Susceptibility studies should be performed to determine the presence of a Capreomycin-susceptible strain of M. tuberculosis.

Capreomycin for injection is contraindicated in patients who are hypersensitive to Capreomycin.

Audiometric measurements and assessment of vestibular function should be performed prior to initiation of therapy with Capreomycin for injection and at regular intervals during treatment.

Renal injury, with tubular necrosis, elevation of the blood urea nitrogen (BUN) or serum creatinine, and abnormal urinary sediment, has been noted. Slight elevation of the BUN and serum creatinine has been observed in a significant number of patients receiving prolonged therapy. The appearance of casts, red cells, and white cells in the urine has been noted in a high percentage of these cases. Elevation of the BUN above 30 mg/100 mL or any other evidence of decreasing renal function with or without a rise in BUN levels calls for careful evaluation of the patient, and the dosage should be reduced or the drug completely withdrawn. The clinical significance of abnormal urine sediment and slight elevation in the BUN (or serum creatinine) observed during long-term therapy with Capreomycin for injection has not been established.

The peripheral neuromuscular blocking action that has been attributed to other polypeptide antibiotics (colistin sulfate, polymyxin A sulfate, paromomycin, and viomycin) and to aminoglycoside antibiotics (streptomycin, dihydrostreptomycin, neomycin, and kanamycin) has been studied with Capreomycin for injection. A partial neuromuscular blockade was demonstrated after large intravenous doses of Capreomycin for injection. This action was enhanced by ether anesthesia (as has been reported for neomycin) and was antagonized by neostigmine.

Caution should be exercised in the administration of antibiotics, including Capreomycin for injection, to any patient who has demonstrated some form of allergy, particularly to drugs.

Regular tests of renal function should be made throughout the period of treatment, and reduced dosage should be employed in patients with known or suspected renal impairment.

Renal function studies should be made both before therapy with Capreomycin for injection is started and on a weekly basis during treatment.

Since hypokalemia, hypomagnesemia and hypocalcemia may occur during therapy, these serum electrolyte levels should be determined frequently.

For neuromuscular blocking action of this drug, see PRECAUTIONS, GENERAL.

Studies have not been performed to determine potential for carcinogenicity, mutagenicity, or impairment of fertility.

Safety and effectiveness in pediatric patients have not been established ( see boxed WARNINGS).

Clinical studies of Capreomycin for injection did not analyze the safety and efficacy of patients aged 65 and over to determine whether they respond differently from younger patients. Other reported clinical experience has not identified differences in responses between the elderly and younger patients. In general, dose selection for an elderly patient should be cautious, usually starting at the low end of the dosing range, reflecting the greater frequency of decreased hepatic, renal, or cardiac function, and of concomitant disease or other drug therapy.

Capreomycin for injection is known to be substantially excreted by the kidney (see CLINICAL PHARMACOLOGY), and the risk of toxic reactions to this drug may be greater in patients with impaired renal function. Because elderly patients are more likely to have decreased renal function, care should be taken in dose selection, and it may be useful to monitor renal function ( see PRECAUTIONS, Laboratory Tests). Patients with reduced renal function should have dosage reduction based on creatinine clearance using the guidelines included in Table 1 ( see DOSAGE AND ADMINISTRATION).

The geriatric population is also more likely to have impaired hearing at baseline. Audiometric measurements and assessment of vestibular function should be performed prior to initiation of therapy with Capreomycin for injection and at regular intervals during treatment ( see PRECAUTIONS, General).

Nephrotoxicity: In 36% of 722 patients treated with Capreomycin for injection, elevation of the BUN above 20 mg/100 mL has been observed. In many instances, there was also depression of PSP excretion and abnormal urine sediment. In 10% of this series, the BUN elevation exceeded 30 mg/100 mL.

Toxic nephritis was reported in 1 patient with tuberculosis and portal cirrhosis who was treated with Capreomycin for injection (1 g) and aminosalicylic acid daily for 1 month. This patient developed renal insufficiency and oliguria and died. Autopsy showed subsiding acute tubular necrosis.

Electrolyte disturbances including hypokalemia, hypomagnesemia and hypocalcemia, sometimes serious in nature, have been reported.

Ototoxicity: Subclinical auditory loss was noted in approximately 11% of 722 patients undergoing treatment with Capreomycin for injection. This was a 5- to 10-decibel loss in the 4000- to 8000-CPS range. Clinically apparent hearing loss occurred in 3% of the 722 subjects. Some audiometric changes were reversible. Other cases with permanent loss were not progressive following withdrawal of Capreomycin for injection.

Tinnitus and vertigo have occurred.

Liver: Serial tests of liver function have demonstrated a decrease in BSP excretion without change in AST (SGOT) or ALT (SGPT) in the presence of preexisting liver disease. Abnormal results in liver function tests have occurred in many persons receiving Capreomycin for injection in combination with other antituberculosis agents that also are known to cause changes in hepatic function. The role of Capreomycin for injection in producing these abnormalities is not clear; however, periodic determinations of liver function are recommended.

Hypersensitivity: Urticaria and maculopapular skin rashes associated in some cases with febrile reactions have been reported when Capreomycin for injection and other antituberculosis drugs were given concomitantly.

Nephrotoxicity following the parenteral administration of Capreomycin for injection is most closely related to the area under the curve of the serum concentration versus time graph. The elderly patient, patients with abnormal renal function or dehydration, and patients receiving other nephrotoxic drugs are at much greater risk for developing acute tubular necrosis.

Damage to the auditory and vestibular divisions of cranial nerve VIII has been associated with Capreomycin for injection given to patients with abnormal renal function or dehydration and in those receiving medications with additive auditory toxicities. These patients often experience dizziness, tinnitus, vertigo, and a loss of high-tone acuity.

If Capreomycin is ingested, toxicity would be unlikely because it is poorly absorbed (less than 1%) from an intact gastrointestinal system.

Hypokalemia, hypocalcemia, hypomagnesemia, and an electrolyte disturbance resembling Bartter's syndrome have been reported to occur in patients with Capreomycin toxicity.

The subcutaneous median lethal dose in mice was 514 mg/kg.

To obtain up-to-date information about the treatment of overdose, a good resource is your certified Regional Poison Control Center. Telephone numbers of certified poison control centers are listed in the Physicians' Desk Reference (PDR). In managing overdosage, consider the possibility of multiple drug overdoses, interaction among drugs, and unusual drug kinetics in your patient.

Protect the patient's airway and support ventilation and perfusion. Meticulously monitor and maintain, within acceptable limits, the patient's vital signs, blood gases, serum electrolytes, etc. Absorption of drugs from the gastrointestinal tract may be decreased by giving activated charcoal, which, in many cases, is more effective than emesis or lavage; consider charcoal instead of or in addition to gastric emptying. Repeated doses of charcoal over time may hasten elimination of some drugs that have been absorbed. Safeguard the patient's airway when employing gastric emptying or charcoal.

Hemodialysis may be effectively used to remove Capreomycin in patients with significant renal disease.

Capreomycin for injection may be administered intramuscularly or intravenously following reconstitution. Reconstitution is achieved by dissolving the vial contents (1 g) in 2 mL of 0.9% Sodium Chloride Injection or Sterile Water for Injection. Two to 3 minutes should be allowed for complete dissolution.

Intravenously — For intravenous infusion, reconstituted Capreomycin for injection should be diluted in 100 mL of 0.9% Sodium Chloride Injection and administered over 60 minutes.

Intramuscularly — Reconstituted Capreomycin for injection should be given by deep intramuscular injection into a large muscle mass, since superficial injection may be associated with increased pain and the development of sterile abscesses.

For administration of a 1-g dose, the entire contents of the vial should be given. For doses lower than 1 g, the following dilution table may be used.

The solution may acquire a pale straw color and darken with time, but this is not associated with loss of potency or the development of toxicity. After reconstitution, all solutions of Capreomycin for injection may be stored for up to 24 hours under refrigeration.

Capreomycin is always administered in combination with at least 1 other antituberculosis agent to which the patient's strain of tubercle bacilli is susceptible. The usual dose is 1 g daily (not to exceed 20 mg/kg/day) given intramuscularly or intravenously for 60 to 120 days, followed by 1 g by either route 2 or 3 times weekly. (Note — Therapy for tuberculosis should be maintained for 12 to 24 months. If facilities for administering injectable medication are not available, a change to appropriate oral therapy is indicated on the patient's release from the hospital.)

Patients with reduced renal function should have dosage reduction based on creatinine clearance using the guidelines included in Table 1. These dosages are designed to achieve a mean steady-state Capreomycin level of 10 mcg/mL.

How is Capreomycin Supplied

Capreomycin for Injection, USP, is available in:

In addition to renal and cranial nerve VIII toxicity demonstrated in animal toxicology studies, cataracts developed in 2 dogs on doses of 62 mg/kg and 100 mg/kg for prolonged periods.

In teratology studies, a low incidence of “wavy ribs” was noted in litters of female rats treated with daily doses of 50 mg/kg or more of Capreomycin. 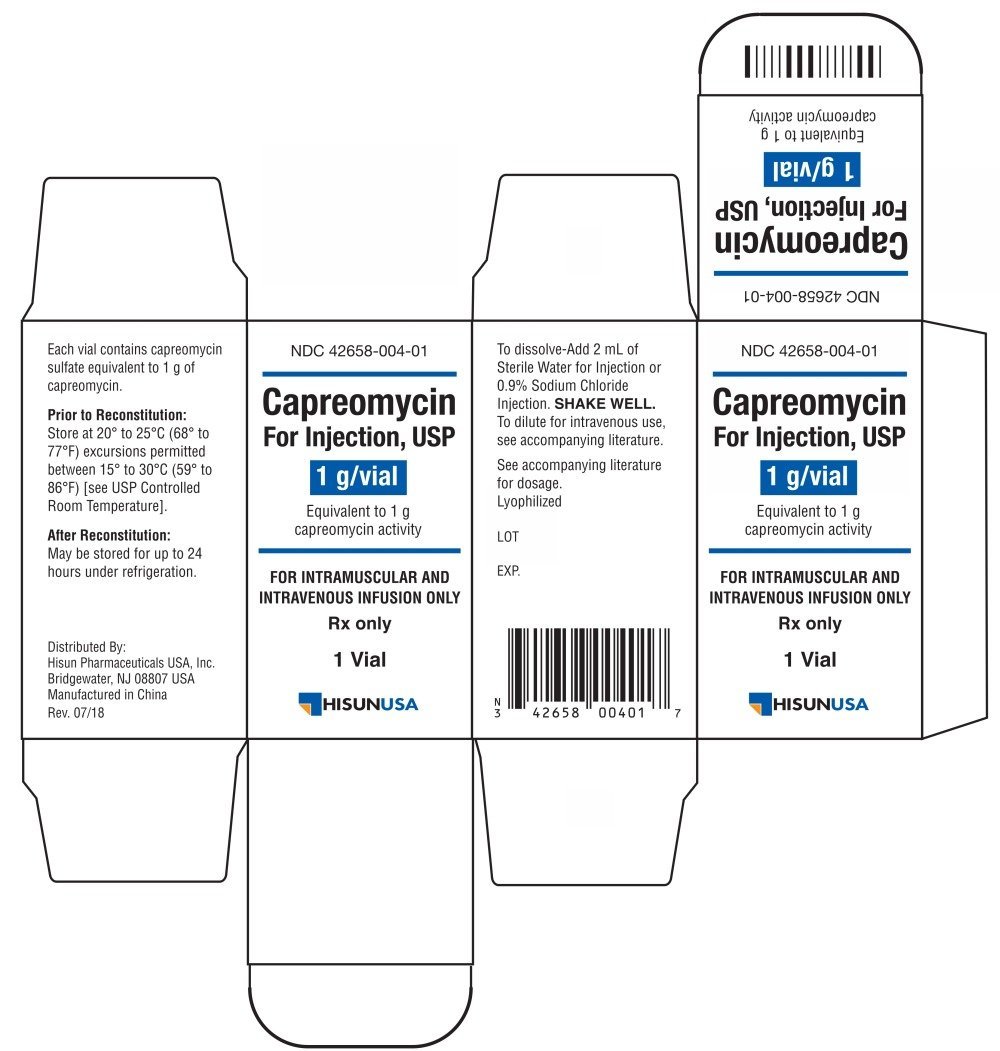