4% and 8% Benzoyl Peroxide Cleansing Lotions should not be used in patients who have shown hypersensitivity to benzoyl peroxide or to any of the other ingredients in the product.

General: For external use only. Avoid contact with eyes and mucous membranes. AVOID CONTACT WITH HAIR, FABRICS OR CARPETING AS BENZOYL PEROXIDE WILL CAUSE BLEACHING.

Carcinogenesis, Mutagenesis, Impairment of Fertility:
Based upon all available evidence, benzoyl peroxide is not considered to be a carcinogen. However, data from a study using mice known to be highly susceptible to cancer suggest that benzoyl peroxide acts as a tumor promoter. The clinical significance of the findings is not known.

Pediatric Use: Safety and effectiveness in children below the age of 12 have not been established.

Contact sensitization reactions are associated with the use of topical benzoyl peroxide products and may be expected to occur in 10 to 25 of 1000 patients. The most frequent adverse reactions associated with benzoyl peroxide use are excessive erythema and peeling which may be expected to occur in 5 of 100 patients. Excessive erythema and peeling most frequently appear during the initial phase of drug use and may normally be controlled by reducing frequency of use.

Shake well before using. Wash the affected areas once a day during the first week, and twice a day thereafter as tolerated. Wet skin areas to be treated; apply Benzoyl Peroxide 4% or 8% Cleansing Lotion, work to a full lather, rinse thoroughly and pat dry. Frequency of use should be adjusted to obtain the desired clinical response. Clinically visible improvement will normally occur by the third week of therapy. Maximum lesion reduction may be expected after approximately eight to twelve weeks of drug use. Continuing use of the drug is normally required to maintain a satisfactory clinical response.

KEEP THIS AND ALL MEDICTIONS OUT OF THE REACH OF CHILDREN.

Below represents the current packaging being used: 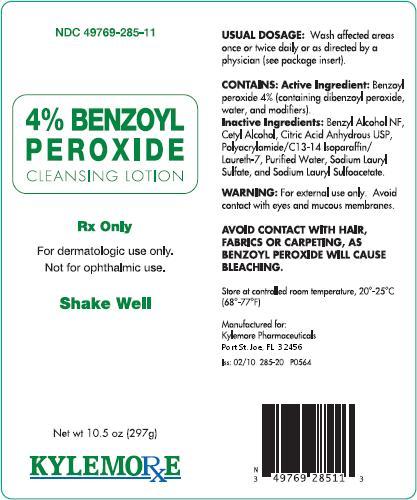 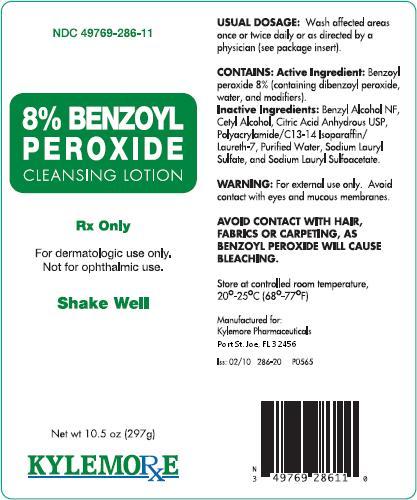