Indications and Usage for Atropine and Pralidoxime

ATNAA is indicated for the treatment of poisoning by susceptible organophosphorus nerve agents having anticholinesterase activity in adults.

Atropine and Pralidoxime Dosage and Administration

First Dose: If you experience some or all of the mild symptoms of nerve agent exposure listed in Table 1, self-administer one (1) ATNAA injection intramuscularly into the lateral thigh muscle or buttocks.

Wait 10 to 15 minutes for ATNAA to take effect. If, after 10 to 15 minutes, the symptoms of organophosphorus nerve agent poisoning are not relieved, seek someone else to check your symptoms. Another service member must administer the second and third injections.

Additional Doses: If you encounter a service member suffering from severe symptoms of organophosphorus nerve agent poisoning listed in Table 1 and one ATNAA has been self-administered, administer two (2) additional ATNAA injections intramuscularly in rapid succession into the casualty's lateral thigh muscle or buttocks.

If a service member is encountered suffering from severe signs of organophosphorus nerve agent poisoning and ATNAA self-aid has not been administered, immediately administer in rapid succession three (3) ATNAA injections into the casualty's lateral thigh muscle or buttocks.

The following instructions should be given to service members for the administration of ATNAA single-dose injections.

If you encounter a service member suffering from any of the severe symptoms of organophosphorus nerve agent poisoning, render the following aid:

When activated, ATNAA sequentially administers both drugs intramuscularly through a single needle in one injection.

Atropine should be administered with caution in individuals at risk for acute glaucoma.

Atropine should be administered with caution in individuals with clinically significant bladder outflow obstruction because of the risk of urinary retention.

Atropine should be administered with caution in individuals with partial pyloric stenosis because of the risk of complete pyloric obstruction.

The following adverse reactions associated with the use of Atropine and Pralidoxime chloride were identified in the literature. Because these reactions are reported voluntarily from a population of uncertain size, it is not always possible to reliably estimate their frequency or establish a causal relationship to drug exposure.

Because ATNAA contains pralidoxime chloride, which may potentiate the effect of atropine, signs of atropinization may occur earlier than might be expected when atropine is used alone.

Hypersensitivity reactions will occasionally occur; these are usually seen as skin rashes, and may progress to exfoliation. Anaphylactic reaction and laryngospasm are rare.

Muscle tightness and pain may occur at the injection site.

In cases where ATNAA is inadvertently administered to service members who are not poisoned with susceptible organophosphorus nerve agents having anticholinesterase activity, the following effects on their ability to function normally may occur.

Atropine 2 mg IM, roughly the equivalent of one ATNAA injection, when given to healthy male volunteers, is associated with minimal effects on visual, motor, and mental functions, though unsteadiness walking and difficulty concentrating may occur. Atropine reduces body sweating and increases body temperature, particularly with exercise and under hot conditions.

Atropine 4 mg IM, roughly the equivalent of two ATNAA injections, when given to healthy male volunteers, is associated with impaired visual acuity, visual near point accommodation, logical reasoning, digital recall, learning, and cognitive reaction time. Ability to read is reduced or lost. Subjects are unsteady and need to concentrate on walking. These effects begin about 15 minutes to one hour or more post-dose.

Atropine 6 mg IM, roughly the equivalent of three ATNAA injections, when given to healthy male volunteers, is associated with the effects described above plus additional central effects including poor coordination, poor attention span, and visual hallucinations (colored flashes) in many subjects. Frank visual hallucinations, auditory hallucinations, disorientation, and ataxia occur in some subjects. Skilled and labor-intense tasks are performed more slowly and less efficiently. Decision making takes longer and is sometimes impaired.

It is unclear if the above data, obtained from studies of healthy male subjects, can be extrapolated to other populations. In the elderly and individuals with co-morbid conditions, the effects of ≥2 mg atropine on the ability to see, walk, and think properly are unstudied; effects may be greater in susceptible populations.

Since pralidoxime chloride in ATNAA reactivates cholinesterases and succinylcholine and mivacurium are metabolized by cholinesterases, service members poisoned by susceptible organophosphorus nerve agents having anticholinesterase activity who have received ATNAA may exhibit accelerated reversal of the neuromuscular blocking effects of succinylcholine and mivacurium (relative to poisoned service member who has not received pralidoxime). Monitor for neuromuscular effects with concomitant administration.

Atropine readily crosses the placental barrier and enters fetal circulation. There are no adequate data on the developmental risk associated with the use of atropine, pralidoxime chloride, or the combination in pregnant women. Adequate animal reproduction studies have not been conducted with atropine, pralidoxime chloride, or the combination. In the U.S. general population, the estimated background risk of major birth defects and miscarriage in clinically recognized pregnancies is 2-4% and 15-20%, respectively.

Atropine has been reported to be excreted in human milk. It is not known whether pralidoxime chloride is excreted in human milk. There are no data on the effects of atropine or pralidoxime chloride on the breastfed infant or the effects of the drugs on milk production. The developmental and health benefits of breastfeeding should be considered along with the mother's clinical need for ATNAA and any potential adverse effects on the breastfed infant from ATNAA or from the underlying maternal condition.

Safety and effectiveness of ATNAA in pediatric patients have not been established.

Geriatric individuals may be more susceptible to the effects of atropine [see Clinical Pharmacology (12.3)].

Manifestations of atropine overdose are dose-related and include flushing, dry skin and mucous membranes, tachycardia, widely dilated pupils that are poorly responsive to light, blurred vision, and fever (which can sometimes be dangerously elevated). Locomotor difficulties, disorientation, hallucinations, delirium, confusion, agitation, coma, and central depression can occur and may last 48 hours or longer. In instances of severe atropine intoxication, respiratory depression, coma, circulatory collapse, and death may occur.

For atropine overdose, supportive treatment should be administered. If respiration is depressed, artificial respiration with oxygen is necessary. Ice bags, a hypothermia blanket, or other methods of cooling may be required to reduce atropine-induced fever, especially in pediatric patients [see Use in Specific Populations (8.4)]. Catheterization may be necessary if urinary retention occurs. Since atropine elimination largely takes place through the kidney, urinary output must be maintained and increased if possible; intravenous fluids may be indicated. Because of atropine-induced photophobia, the room should be darkened.

A benzodiazepine may be needed to control marked excitement and convulsions. However, large doses for sedation should be avoided because the central nervous system depressant effect may coincide with the depressant effect occurring late in severe atropine poisoning. Barbiturates are potentiated by the anticholinesterases; therefore, barbiturates should be used cautiously in the treatment of convulsions. Central nervous system stimulants are not recommended.

Each prefilled ATNAA is a single-dose autoinjector that provides an intramuscular dose of atropine, a cholinergic muscarinic antagonist, and pralidoxime chloride, a cholinesterase reactivator, in a self-contained unit, specifically designed for automatic self- or buddy-administration by military personnel.

When activated, each ATNAA injection delivers the following:

After ATNAA has been activated, the empty autoinjector should be disposed of properly [see Dosage and Administration (2.2)]. It cannot be refilled, nor can the protruding needle be retracted.

Atropine occurs as white crystals, usually needle-like, or as a white, crystalline powder. It is slightly soluble in water with a molecular weight of 289.38. Atropine, a naturally occurring belladonna alkaloid, is a racemic mixture of equal parts of d- and l-hyoscyamine, with activity due almost entirely to the levo isomer of the drug.

Chemically, atropine is designated as 1αH,5αH-Tropan-3α-ol (±)-tropate. Its empirical formula is C17H23NO3 and its structural formula is as follows:

Atropine reduces secretions in the mouth and respiratory passages, relieves airway constriction, and may reduce centrally-mediated respiratory paralysis. In severe organophosphorus nerve agent poisoning, a fully atropinized patient may develop or continue to have respiratory failure and may require artificial respiration and suctioning of airway secretions. Atropine may cause thickening of secretions.

Atropine-induced parasympathetic inhibition may be preceded by a transient phase of stimulation, especially on the heart where small doses first slow the rate before characteristic tachycardia develops due to paralysis of vagal control. Atropine increases heart rate and reduces atrioventricular conduction time. Adequate atropine doses can prevent or abolish bradycardia or asystole produced by organophosphorus nerve agents.

Atropine will not act on the neuromuscular junction and has no effect on muscle paralysis or weakness, fasciculations or tremors; pralidoxime is intended to treat these symptoms.

Atropine is well absorbed after intramuscular administration. Single dose ATNAA pharmacokinetic data for atropine are shown in Figure 1. The intramuscular injection site was the antero-lateral thigh.

The pharmacokinetic properties of the components of ATNAA are presented in Table 2.

The pharmacokinetics of atropine or pralidoxime have not been evaluated in subjects with renal or hepatic impairment.

Pralidoxime Chloride: A single ATNAA injection produced a mean Cmax for pralidoxime is about 36% higher in females than males. Tmax is 23 minutes in females and 32 minutes in males. Pralidoxime half-life in males and females are 153 and 107 minutes, respectively.

ATNAA is indicated for short-term emergency use only, and no adequate studies regarding the carcinogenic potential of atropine or pralidoxime chloride have been conducted.

Studies to assess the mutagenic potential of atropine or pralidoxime chloride have not been conducted.

In studies in which male rats were orally administered atropine (62.5 to 125 mg/kg) for one week prior to mating and throughout a 5-day mating period with untreated females, a dose-related decrease in fertility was observed. A no-effect dose for male reproductive toxicity was not established. The lowest dose tested was 290 times (on a mg/m2 basis) the dose of atropine in a single application of ATNAA (2.1 mg).

Fertility studies of atropine in females have not been conducted.

The effects of pralidoxime chloride on fertility have not been assessed.

Each ATNAA is supplied in a pouch that provides protection from light.

Use by Military Personnel

If feasible and appropriate, advise service member that ATNAA is an initial emergency treatment, that they need additional care at a healthcare facility.

If feasible and appropriate, advise the service member to avoid a hot environment and excessive physical activity since ATNAA can inhibit sweating which can lead to overheating and heat injury. 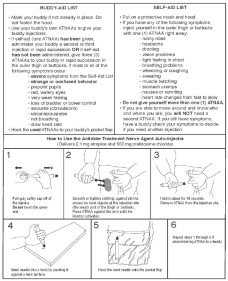 For Use in Nerve Agent Poisoning Only

Sterile Solution for Intramuscular Use Only 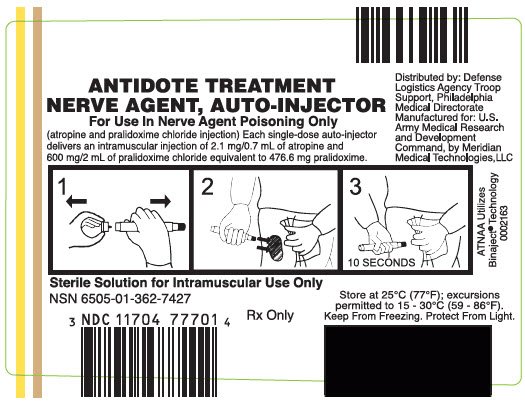