This page contains information on Zeniquin for veterinary use.
The information provided typically includes the following:

For oral use in dogs and cats only

Marbofloxacin is a synthetic broad-spectrum antibacterial agent from the fluoroquinolone class of chemotherapeutic agents. Marbofloxacin is the non-proprietary designation for 9-fluoro-2,3-dihydro-3-methyl-10-(4-methyl-1-piperazinyl)-7-oxo-7H-pyrido[3,2,1-ij][4,1,2] benzoxadiazine-6-carboxylic acid. The empirical formula is C17H19FN4O4 and the molecular weight is 362.36. The compound is soluble in water; however, solubility decreases in alkaline conditions. The N-octanol/water partition coefficient (Kow) is 0.835 measured at pH 7 and 25°C. 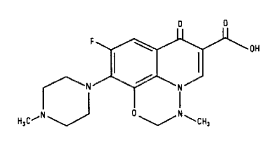 In vitro plasma protein binding of marbofloxacin in dogs was 9.1% and in cats was 7.3%. In the cat, approximately 70% of an oral dose is excreted in the urine as marbofloxacin and metabolites with approximately 85% of the excreted material as unchanged drug. Pharmacokinetic parameters related to intravenous dosing were estimated in a study of 6 healthy adult beagle dogs, and are summarized in Table 1. The absolute bioavailability following dosing of oral tablets to the same animals was 94%.

Marbofloxacin plasma concentrations were determined over time in healthy adult beagle dogs (6 dogs per dosage group) following single oral doses of 1.25 mg/lb or 2.5 mg/lb. Absorption of orally administered marbofloxacin increases proportionally over the dose range of 1.25 to 2.5 mg/lb. Marbofloxacin plasma concentrations were determined over time in 7 healthy adult male cats following a single oral dose of 2.5 mg/lb. Plasma pharmacokinetic parameters following oral dosing of dogs and cats are summarized in Figures 2 and 3 and in Table 2. Based on the terminal elimination half-life and the dosing interval, steady-state levels are reached after the third dose and are expected to be approximately 25% greater in dogs and 35% greater in cats than those achieved after a single dose. Marbofloxacin is widely distributed in canine tissues. Tissue concentrations of marbofloxacin were determined in healthy male beagle dogs (4 dogs per time period) at 2, 18 and 24 hours after a single oral dose (1.25 or 2.5 mg/lb) and are summarized in Tables 3a and 3b.

Table 2: Mean pharmacokinetic parameters following oral administration of marbofloxacin tablets to adult beagle dogs at a nominal dosage of 1.25 mg/lb or 2.5 mg/lb and to cats at 2.5 mg/lb. 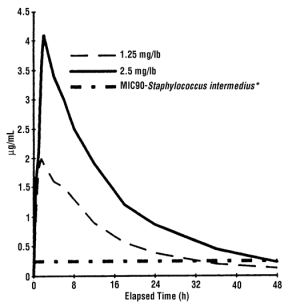 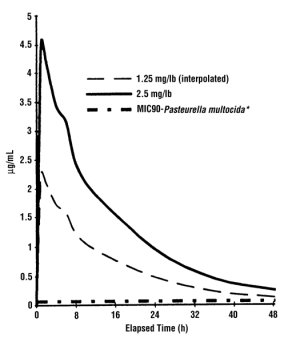 Table 3a: Tissue distribution following a single oral administration of marbofloxacin tablets to adult beagle dogs at a dosage of 1.25 mg/lb*.

Table 3b: Tissue distribution following a single oral administration of marbofloxacin tablets to adult beagle dogs at a dosage of 2.5 mg/lb.

Microbiology: The primary action of fluoroquinolones is to inhibit the bacterial enzyme, DNA gyrase. In susceptible organisms, fluoroquinolones are rapidly bactericidal at relatively low concentrations. Marbofloxacin is bactericidal against a broad range of gram-negative and gram-positive organisms. The minimum inhibitory concentrations (MICs) of pathogens isolated in clinical field studies performed in the United States were determined using National Committee for Clinical Laboratory Standards (NCCLS) standards, and are shown in Tables 4 and 5.

* The correlation between in vitro susceptibility data (MIC) and clinical response has not been determined.

Table 5: MIC Values* (µg/mL) of marbofloxacin against pathogens isolated from skin and soft tissue infections in cats enrolled in clinical studies conducted in 1995 and 1998.

* The correlation between in vitro susceptibility data (MIC) and clinical response has not been determined.

Zeniquin (marbofloxacin) tablets are indicated for the treatment of infections in dogs and cats associated with bacteria susceptible to marbofloxacin.

WARNING: For use in animals only. Keep out of reach of children. Avoid contact with eyes. In case of contact, immediately flush eyes with copious amounts of water for 15 minutes. In case of dermal contact, wash skin with soap and water. Consult a physician if irritation persists following ocular or dermal exposure. Individuals with a history of hypersensitivity to fluoroquinolones should avoid this product. In humans, there is a risk of user photosensitization within a few hours after excessive exposure to quinolones. If excessive accidental exposure occurs, avoid direct sunlight.

Quinolones should be used with caution in animals with known or suspected central nervous system (CNS) disorders. In such animals, quinolones have, in rare instances, been associated with CNS stimulation which may lead to convulsive seizures. Quinolones have been shown to produce erosions of cartilage of weight-bearing joints and other signs of arthropathy in immature animals of various species. The use of fluoroquinolones in cats has been reported to adversely affect the retina. Such products should be used with caution in cats. The safety of marbofloxacin in animals used for breeding purposes, pregnant, or lactating has not been demonstrated.

The following clinical signs were reported during the course of clinical field studies in dogs receiving marbofloxacin at dosages up to 2.5 mg/lb daily: decreased or loss of appetite (5.4%), decreased activity (4.4%), and vomiting (2.9%). The following signs were reported in less than 1% of cases in dogs: increased thirst, soft stool/diarrhea, behavioral changes, shivering/shaking/tremors, and ataxia. One dog which had a seizure the day before study enrollment experienced a seizure while on marbofloxacin therapy.

The following clinical signs were reported during clinical field studies in cats receiving 1.25 mg/lb/day: diarrhea (2.1%) and soft stool (1.4%). Vomiting was reported in less than 1% of cases in cats.

The recommended dosage for oral administration to dogs and cats is 1.25 mg marbofloxacin per lb of body weight once daily, but the dosage may be safely increased to 2.5 mg/lb.

Drug Interactions: Compounds (e.g., sucralfate, antacids, and mineral supplements) containing divalent and trivalent cations (e.g., iron, aluminum, calcium, magnesium, and zinc) can interfere with the absorption of quinolones which may result in a decrease in product bioavailability. Therefore, the concomitant oral administration of quinolones with foods, supplements, or other preparations containing these compounds should be avoided.

EFFECTIVENESS CONFIRMATION: Clinical effectiveness was confirmed in bacterial skin and soft tissue infections in dogs and cats and urinary tract infections (cystitis) in dogs associated with bacteria susceptible to marbofloxacin. Bacterial pathogens isolated in clinical field studies are provided in the Microbiology section.

Dogs: The toxicity of marbofloxacin was assessed in 12- to 14-month-old beagle dogs administered marbofloxacin at 2.5, 7.5 and 12.5 mg/lb/day for 42 days. Vomiting, reddened skin (usually involving the ears) and reddened mucous membranes were occasionally observed in all groups, including controls, but were noted most frequently in the 12.5 mg/lb group. Decreased food consumption and weight loss were significant in the 7.5 mg/lb and 12.5 mg/lb groups. No clinical lameness was noted in any of the treated animals. Minimal to slight lesions in the articular cartilage were observed in 1/8 placebo-treated animals and in 3/8 animals given 12.5 mg marbofloxacin/lb. Macroscopically, these lesions were vesicles, raised areas, or depressed, light-colored areas. Microscopically, these lesions were characterized by the presence of one or more of the following: fissuring, erosion, chondrocyte proliferation, fibrillation, or vertical splitting of the articular cartilage. These cartilage lesions in treated dogs were similar to those in control dogs, and were not typical of those produced by fluoroquinolones. In addition to the above pathologic alterations, red areas of articular cartilage were noted macroscopically in 0/8 placebo-treated dogs and in 2/8 dogs from each of the three marbofloxacin-treated groups. These areas usually correlated microscopically with areas of vascularity of the articular surface, but could not be confirmed microscopically in all animals. They consisted of large blood vessels in mature fibrous connective tissue, with no indication of active vascularization due to drug-induced damage. They were considered most likely to be developmental anomalies or normal variations of the joint surface and were not considered to be related to drug treatment.

Marbofloxacin was administered to 12- to 14-month-old beagle dogs at a dosage of 25 mg/lb/day for 12 days. Decreased food consumption, vomiting, dehydration, excessive salivation, tremors, reddened skin, facial swelling, decreased activity and weight loss were seen in treated dogs. No clinical lameness was noted. As in the 42 day study, grossly visible, focal, red areas of articular cartilage were seen. These findings were noted in 2/6 placebo-treated dogs and in 4/6 marbofloxacin-treated dogs. The foci were areas of fibrocartilage with prominent vascularization or increased vascularization of subchondral bone. Due to the appearance microscopically and macroscopically, these red foci were described as likely to be developmental anomalies or normal variations in articular cartilage.

Marbofloxacin administered to 3- to 4-month-old, large breed, purpose-bred mongrel dogs at a dosage of 5 mg/lb/day for 14 days resulted in marked lameness in all dogs due to articular cartilage lesions. Lameness was accompanied by decreased appetite and activity.

Cats: Marbofloxacin was administered for 42 consecutive days to 24 cats approximately 8 months old (8 cats per treatment group) at the dosages of 2.5, 7.5 and 12.5 mg/lb/day (5.5, 16.5 and 27.5 mg/kg/day). Treatment with marbofloxacin did not produce adverse effects on body weights, food consumption, serum chemistry, urinalysis or organ weight parameters. Decreased segmented neutrophil counts were observed in some cats in all treatment groups, including the placebo group, but mean counts were significantly lower in the marbofloxacin-treated groups. In some cats, absolute neutrophil counts were below normal reference values (as low as 615 neutrophils/µL in a marbofloxacin-treated cat and as low as 882 neutrophils/µL in a placebo-treated cat). Other hematological observations were not adversely affected. Clinical signs were occasionally noted in cats in the highest dosage group: excessive salivation in 4/8 cats and redness of ear pinnae in 2/8 cats. Macroscopic changes in the articular cartilage of femurs were seen in one cat receiving 7.5 mg/lb and in 3 cats receiving 12.5 mg/lb. Microscopically, these gross lesions were related to a focal or multifocal chondropathy. Microscopic chondropathy not associated with macroscopic observations was also present in one cat treated with 2.5 mg/lb daily (1X the upper end of the dose range) and one additional cat treated with 7.5 mg/lb daily. There was no evidence of lameness during the course of the study. A perivascular to diffuse dermatitis was seen microscopically in one mid-dose cat and 4 high-dose cats. Funduscopic exam by a board-certified ophthalmologist and histologic examination of retina and optic nerve by ocular pathologists revealed no lesions in any of the treatment groups.

Marbofloxacin was also administered orally to 6 cats approximately 8 months of age for 14 consecutive days at a dosage of 25 mg/lb/day (55 mg/kg/day). Clinical signs associated with drug intolerance were excessive salivation in 5/6 cats and redness of ear pinnae in all cats after 8 days of treatment. Emesis was noted occasionally in several cats and diminished activity was noted in one cat. Decreased food intake was noted in some animals, primarily males, when compared to controls. Perivascular to diffuse dermatitis was seen microscopically in the pinnae of all treated animals and in the standard skin samples of several animals. There was focal or multifocal articular chondropathy in 2/6 treated animals. One treated cat had a duodenal mucosal erosion and one treated cat had a pyloric ulcer. There were no observations of lameness and no adverse effects on hematology, clinical chemistry, urinalysis, or organ weight parameters. Funduscopic examination by a board-certified ophthalmologist and histologic examination of retina and optic nerve by ocular pathologists revealed no lesions.

A study was conducted to investigate the effect of marbofloxacin on articular cartilage of skeletally mature cats 12-14 months of age. Forty cats were randomly assigned to 4 groups of 10 cats each. Groups received placebo or marbofloxacin at dosages of 1.25, 3.75 or 7.5 mg/lb/day (2.75, 8.25 or 16.5 mg/kg/day) for 42 consecutive days. There were no treatment-related pathological changes in the joints or other tissues. Emesis and soft stools was noted in all treatment groups, including placebo, and increased in frequency with increasing dose and duration of treatment. Emesis was more apparent in the high-dose males.

Zeniquin tablets are available in the following strengths of marbofloxacin and bottle sizes: