This page contains information on Simbadol (buprenorphine injection) for veterinary use.
The information provided typically includes the following:

For subcutaneous use in cats

For Use in Cats Only

Buprenorphine belongs to the opioid class of drugs and is a narcotic under the Controlled Substances Act due to its chemical derivation from thebaine. Buprenorphine hydrochloride is a weakly acidic, white or off-white crystalline powder with limited solubility in water. Chemically, it is 17-(cyclopropylmethyl)-α-(1,1-dimethylethyl)-4, 5-epoxy-18,19-dihydro-3-hydroxy-6-methoxy-α-methyl-6, 14-ethenomorphinan-7-methanol, hydrochloride [5α, 7α(S)]. Buprenorphine hydrochloride has the molecular formula of C29H41NO4•HCl, the molecular weight of 504.09, and the following structural formula: 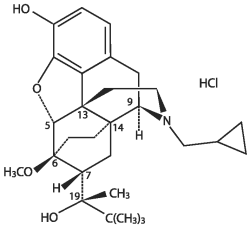 SIMBADOL is indicated for the control of postoperative pain associated with surgical procedures in cats.

The dosage of SIMBADOL is 0.24 mg/kg (0.11 mg/lb) administered subcutaneously once daily, for up to 3 days. Administer the first dose approximately 1 hour prior to surgery.

Do not dispense SIMBADOL for administration at home by the pet owner (see Human Safety).

SIMBADOL is contraindicated in cats with known hypersensitivity to buprenorphine hydrochloride or any of the components of SIMBADOL, or known intolerance to opioids.

For subcutaneous (SQ) injectable use in cats.

Not for use in humans. Keep out of reach of children.

Adult Human User Safety while handling SIMBADOL in the hospital:

If human skin is accidentally exposed to SIMBADOL, wash the exposed areas with soap and water and contact a physician. Accidental exposure could result in absorption of buprenorphine and the potential for adverse reactions.

SIMBADOL contains buprenorphine, a mu opioid partial agonist and Schedule III controlled substance with an abuse potential similar to other Schedule III opioids. SIMBADOL can be abused and is subject to misuse, abuse, addiction, and criminal diversion. SIMBADOL should be handled appropriately to minimize the risk of diversion, including restriction of access, the use of accounting procedures, and proper disposal methods, as appropriate to the clinical setting and as required by law.

Abuse of SIMBADOL poses a hazard of overdose and death. This risk is increased with concurrent abuse of alcohol and other substances including other opioids and benzodiazepines. Buprenorphine has been diverted for non-medical use into illicit channels of distribution. All people handling opioids require careful monitoring for signs of abuse. Drug abuse is the intentional non-therapeutic use of a prescription drug for its rewarding psychological or physiological effects. Abuse of opioids can occur in the absence of true addiction.

SIMBADOL is a Class III opioid. Store in a locked, substantially constructed cabinet according to DEA and local controlled substance guidelines. Discard broached vials after 56 days. Any unused or expired vials must be destroyed by a DEA registered reverse distributor; for further information, contact your local DEA field office or call Zoetis Inc. at 1-888-963-8471.

SIMBADOL injectable solution is a mu opioid partial agonist (1.8 mg buprenorphine/mL). In the case of an emergency, provide the physician with the package insert. Naloxone may not be effective in reversing respiratory depression produced by buprenorphine. The onset of naloxone effect may be delayed by 30 minutes or more. Doxapram hydrochloride has also been used as a respiratory stimulant.

Hyperactivity (opioid excitation) has been observed up to 8 hours after anesthetic recovery (see ADVERSE REACTIONS).

Safety has not been evaluated in moribund cats (i.e., those not expected to live more than 24 hours with or without surgery). Use in such cases should be based on the risk-benefit assessment of the veterinarian.

Use with caution in cats with impaired hepatic function.

The use of SIMBADOL has not been evaluated in breeding, pregnant, or lactating cats, or in cats younger than 4 months of age.

In two controlled field studies, a total of 450 male and female cats 4 months to 16 years old, weighing between 2.6 - 20.0 lb were included in the field safety analysis. In one study, cats underwent a soft tissue surgical procedure (soft tissue). In the other study, cats underwent onychectomy, onychectomy and castration, or onychectomy and ovariohysterectomy (orthopedic). The following tables (one table for each study) show the number of cats exhibiting each observation.

a. Cats may have experienced more than one type or occurrence of an adverse reaction. Cats experiencing the same reaction both during and after surgery are presented in both time periods.

b. During surgery is the time from the administration of the anesthetic induction agent until discontinuation of the gas anesthetic.

c. Hypotension is defined as a mean blood pressure of ≤60 mmHg during surgery and ≤90 mmHg after surgery.

e. Hypertension is defined as a mean blood pressure of ≥120 mmHg during surgery and ≥160 mmHg after surgery.

a. Cats may have experienced more than one type or occurrence of an adverse reaction. Cats experiencing the same reaction both during and after surgery are presented in both time periods.

b. During surgery is the time from the administration of the anesthetic induction agent until discontinuation of the gas anesthetic.

d. Hypotension is defined as a mean blood pressure of ≤60 mmHg during surgery and 90 mmHg after surgery.

e. Hypertension is defined as a mean blood pressure of ≥120 mmHg during surgery and ≥160 mmHg after surgery.

One cat in the SIMBADOL group in the soft tissue study was euthanized after completion of the study due to pulmonary complications. The complications were considered likely related to the severity of the cat’s injuries prior to surgery.

To report suspected adverse events, for technical assistance, or to obtain a copy of the Safety Data Sheet (SDS), contact Zoetis Inc. at 1-888-963-8471.

For additional information about adverse drug experience reporting for animal drugs, contact the FDA at 1-888-FDA-VETS or online at http://www.fda.gov/AnimalVeterinary/SafetyHealth.

Following subcutaneous injection in cats, there is considerable inter-cat variability in plasma concentration and pharmacokinetic parameters.2 Formulated as an immediate release product, buprenorphine is quickly absorbed after subcutaneous injection. Pharmacological effects (e.g., mydriasis) may occur within minutes after injection. Buprenorphine plasma concentrations following subcutaneous injection did not appear to correlate to pharmacodynamics measurements (change in the thermal threshold data). In studies with SIMBADOL analgesic effects of buprenorphine appeared about one hour after injection with a 24 to 28 hour duration of action. Combined pharmacokinetic and pharmacodynamic studies have demonstrated a marked time delay between plasma concentrations and the onset and offset of the analgesic effect which is due to the slow equilibration between drug concentrations in the biophase and the slow association and dissociation of drug binding to the receptor. 2,3

The results of two field studies demonstrate that SIMBADOL is effective and has an acceptable safety margin for the control of postoperative pain in cats.

One 1X cat and one 3X cat experienced an episode of hyperactivity, difficulty in handling, slight disorientation, agitation, dilated pupils (which were responsive to light), and respiratory sinus arrhythmia. One 1X cat (one episode) and one 3X cat (three episodes) were reported with nystagmus. One 1X and one 3X cat were reported with decreased blink response (one episode). Three cats in the 5X group lost body weight (79 g or less) during the study which correlated with decreased food consumption. All other cats gained weight during the study.

Respiratory rate, heart rate, and blood pressure were similar between all groups, including the control group.

Buprenorphine-related clinical pathology findings included an increase in creatine kinase values in the 3X and 5X groups and correlated with subcutaneous inflammation at the injection sites.

Arterial Blood Pressure Study in Cats: Healthy 8.5 to 29.1 month old cats (4/sex/group) were subcutaneously administered SIMBADOL at 0.24 mg/kg (1X) or meloxicam (control), 1 hour prior to anesthetic induction for a 1 hour exploratory laparotomy. Arterial blood pressure was monitored following anesthetic induction and through laparotomy, with indirect blood pressure monitoring prior to anesthesia and for 8 hours following anesthetic recovery. All 16 animals were clinically healthy for the duration of the study. There were no differences between treatment groups in mean blood pressure during the study.