This page contains information on Mirataz (mirtazapine transdermal ointment) for veterinary use.
The information provided typically includes the following:

For topical application in cats only. Not for oral or ophthalmic use.

Federal law (USA) restricts this drug to use by or on the order of a licensed veterinarian.

The structural formula of mirtazapine is: 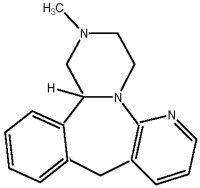 Mirataz™ is indicated for the management of weight loss in cats.

Administer topically by applying a 1.5-inch ribbon of ointment (approximately 2 mg/cat) on the inner pinna of the cat’s ear once daily for 14 days (see Diagrams below).

Wear disposable gloves when applying Mirataz™. Dispose of used gloves after each application.

Alternate the daily application of Mirataz™ between the left and right inner pinna of the ears. Do not administer into the external ear canal. If desired, the inner pinna of the cat’s ear may be cleaned by wiping with a dry tissue or cloth immediately prior to the next scheduled dose. If a dose is missed, apply Mirataz™ the following day and resume daily dosing.

To demonstrate the method of administering the dose, the veterinarian or trained personnel at the clinic should apply the first dose in the presence of the owner.

This ruler measures 1.5 inches. Use this ruler to measure the 1.5 inch ribbon of ointment to be applied. 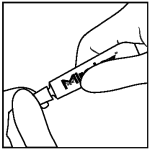 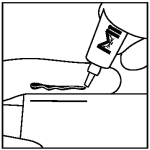 Step 2: Apply even pressure on tube and squeeze a 1.5-inch line of ointment onto your gloved finger using the measured line on the carton or in this package insert. 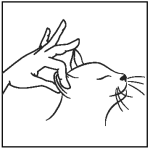 Step 3: Using your gloved finger, gently rub ribbon of ointment on inside pinna of the cat’s ear spreading it evenly over the surface. Dispose of used gloves after each application. If contact with your skin occurs wash thoroughly with soap and warm water.

Mirataz™ is contraindicated in cats with a known hypersensitivity to mirtazapine or to any of the excipients.

Mirataz™ should not be given in combination, or within 14 days before or after treatment with a monoamine oxidase inhibitor (MAOI) [e.g. selegiline hydrochloride (L-deprenyl), amitraz], as there may be an increased risk of serotonin syndrome.

Not for human use. Keep out of reach of children.

Wear disposable gloves when handling or applying Mirataz™ to prevent accidental topical exposure. After application, dispose of used gloves and wash hands with soap and water. After application, care should be taken that people or other animals in the household do not come in contact with the treated cat for 2 hours because mirtazapine can be absorbed transdermally and orally. However, negligible residues are present at the application site and the body of the cat at 2 hours after dosing.

In case of accidental ingestion, or if skin or eye irritation occurs, seek medical attention.

Do not administer orally or to the eye.

Use with caution in cats with hepatic disease. Mirtazapine may cause elevated serum liver enzymes (See Animal Safety).

Use with caution in cats with kidney disease. Kidney disease may cause reduced clearance of mirtazapine which may result in higher drug exposure.

In a randomized, double-masked, vehicle-controlled field study to assess the effectiveness and safety of mirtazapine for the management of weight loss in cats, 115 cats treated with Mirataz™ and 115 cats treated with vehicle control were evaluated for safety. The vehicle control was an ointment containing the same inert ingredients as Mirataz™ without mirtazapine. The most common adverse reactions included application site reactions, behavioral abnormalities (vocalization and hyperactivity), and vomiting. The adverse reactions observed in the study and number of cats experiencing each adverse reaction is summarized in Table 1 below.

* One cat with renal insufficiency was reported with a serious adverse reaction of acute renal failure, hematuria, and pyuria at the Week 2 visit. The cat was enrolled with a history of chronic kidney disease. Euthanasia was elected and necropsy revealed hypertrophic cardiomyopathy, bilateral parathyroid hyperplasia, and mild to moderate renal disease.

Post study, follow-up was done in 199 cats (103 in the Mirataz™ (mirtazapine transdermal ointment) group and 96 in the vehicle control group). Following cessation of Mirataz™, four cats were reported as being less social or less restless, one cat was reported as more active, and one cat was reported with increased hissing and urinating out of the litter box.

To report suspected adverse events, for technical assistance or to obtain a copy of the SDS, contact Kindred Biosciences, Inc. at 888-608-2542.

For additional information about adverse drug experience reporting for animal drugs, contact FDA at 1-888-FDA-VETS or online at

The exact mechanism by which mirtazapine induces weight gain has not been clearly elucidated but appears to be multifactorial.1 Mirtazapine is an α2-adrenergic receptor antagonist nor-adrenergic and serotonergic antidepressant drug. Mirtazapine is known to be a potent antagonist of 5-HT2 and 5-HT3 serotonin receptors in the central nervous system (CNS), and a potent inhibitor of histamine H1 receptors. Because mirtazapine blocks 5-HT2 and 5-HT3 receptors, only 5-HT1A-mediated serotonergic transmission is enhanced. Inhibition of 5-HT2 receptors may account for the orexigenic effects of mirtazapine. Another hypothesis is that mirtazapine induced weight gain may be secondary to changes in leptin and the tumor necrosis factor α(TNF-α) cytokine system.2 A study by Fernstorm (1995) demonstrated a reduction of the basal metabolic rate in patients treated with antidepressants in general.3

The doses used in the target animal safety study were higher (2.8 to 5.4 mg) than the label dose. Based on dose proportionality in AUC0-24hr and Cmax observed in this study, these pharmacokinetic parameters were extrapolated for the 2 mg/cat label dose administered once per day for 35 days (see Table 2).

Steady state was achieved within 14 days. The median accumulation between first and 35th dose was 3.71X (based on AUC ratio) and 3.90X (based on Cmax ratio).

AUC0-24hr = extrapolated area under the plasma time vs. concentration curve

bThe half-life value is reflective of both topical and oral exposure. In another study where cats wore Elizabethan collar to restrict access to their ears and consequent oral exposure, a longer half-life (Mean= 20.7 hr) was observed

Enrolled cats were ≥ 1 year of age and had existing documented medical history of ≥ 5% weight loss deemed clinically significant. The most common pre-existing conditions included renal insufficiency, vomiting, and hyperthyroidism. Some cats had more than one pre-existing condition. Cats were randomized to treatment groups in a 1:1 ratio of Mirataz™ to vehicle control. A total of 230 cats were enrolled and received either Mirataz™ (115 cats) or a vehicle control (115 cats) containing the same inert ingredients without mirtazapine. The cats were 2.8-24.6 years of age and weighed 2.1-9.2 kg. The dosage was a 1.5-inch ribbon (approximately 2 mg/cat) mirtazapine or vehicle ointment administered topically to the inner pinna of the cat’s ear.

Application of mirtazapine and vehicle control was associated with ear flicking, head shaking, pulling away/flinching and infrequently with struggling/fractious behavior, and hypersalivation. Inner and outer pinna erythema, flaking, alopecia, and thickening were observed in all cats in all groups. Erythema, crusting, alopecia, and scabbing of the skin, mostly around the head and neck, was frequently observed in all groups and occasionally affected the tail, tarsi or carpi, likely due to spread of the ointment to these areas by self-grooming.

Mirtazapine administration resulted in increased vocalization, hyperactivity, attention-seeking behaviors, and tremors in all mirtazapine dose groups. Frank blood in the stool was infrequently observed in the vehicle control, 3.2, and 5.3 mg/kg groups. Polyuria was observed in all groups. Polydipsia was observed in one cat in the 5.3 mg/kg group. Three cats (one from each mirtazapine dose group) were isosthenuric. Eight cats developed cystitis with or without urethral obstruction throughout the study in all groups. One cat each from the vehicle control and 3.2 mg/kg group were euthanized early on Day 35 due to urethral obstruction.

Eosinophilia was noted sporadically in the vehicle control, 1.1, and 5.3 mg/kg groups. Mild elevations in ALT values were noted sporadically in vehicle control, 3.2, and 5.3 mg/kg groups. On Day 15, one cat in the 3.2 mg/kg group demonstrated a marked ALT elevation of 3397 U/L, with concurrent elevations in AST and GGT. By Day 42, the ALT declined to 109 U/L and the AST and GGT returned to within normal limits.

The most common observations were ear pinnae reactions (erythema with or without blood and flaking), mild behavioral observations (vocalization and tremors), vomiting, and diarrhea.

Mirataz™ is supplied in a 5 gram aluminum tube.

Mirataz™ is a trademark of Dechra Ltd.