This page contains information on Excede 100 Sterile Suspension for veterinary use.
The information provided typically includes the following:

Ceftiofur crystalline free acid is a broad spectrum cephalosporin antibiotic active against gram-positive and gram-negative bacteria including β-lactamase-producing strains. Like other cephalosporins, ceftiofur is bactericidal, in vitro, resulting from inhibition of cell wall synthesis.

For intramuscular administration in the post-auricular region of the neck of swine (behind the bottom of the base of the ear). For the treatment of swine respiratory disease (SRD) associated with Actinobacillus pleuropneumoniae, Pasteurella multocida, Haemophilus parasuis, and Streptococcus suis.

DOSAGE: Administer as a single intramuscular (IM) injection in the post-auricular region of the neck at a dose of 5 mg ceftiofur equivalents per kg body weight (1 mL per 20 kg body weight) with no more than 2 mL injected in a single injection site. Pigs heavier than 40 kg will require more than one injection.

Most animals will respond to treatment within three to five days. If no improvement is observed, the diagnosis should be reevaluated.

ADMINISTRATION: EXCEDE 100 Sterile Suspension is to be administered as a single intramuscular injection in the post-auricular region of the neck, with no more than 2 mL administered in a single injection site. Shake bottle vigorously for at least 30 seconds before using. If the bottle is left sitting for more than 5 minutes, shake again to resuspend the formulation. 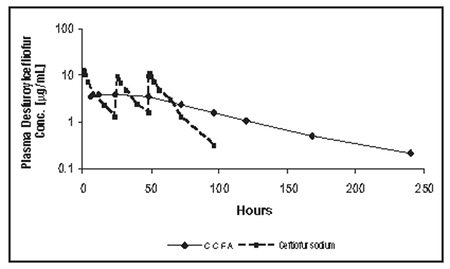 tmax = the time after injection when Cmax occurs (in hours)

AUC0-LOQ = the area under the plasma concentration vs. time curve from time of injection to the limit of quantitation of the assay (0.15 µg CE/mL)

MICROBIOLOGY: Ceftiofur has demonstrated in vitro and in vivo activity against Actinobacillus pleuropneumoniae, Pasteurella multocida, Haemophilus parasuis and Streptococcus suis, the four major pathogenic bacteria associated with swine respiratory disease. In vitro activity has also been demonstrated against Salmonella choleraesuis, another bacterial pathogen associated with SRD; the clinical significance of this is not known.

A summary of minimum inhibitory concentrations (MIC) for various swine pathogens is presented in Table 2. Isolates were obtained in North America in the period 1992-2000. Testing followed Clinical and Laboratory Standards Institute (CLSI) Guidelines.1

** these MIC data were obtained using CLSI procedures but quality control values for H. parasuis had not been standardized

+ No range, all isolates yielded the same value

1 Minimum inhibitory concentration for 90% of the isolates

Ceftiofur breakpoints have been established for bacterial SRD pathogens based on pharmacokinetic studies conducted with ceftiofur sodium and hydrochloride in swine after a single intramuscular injection of 3.0 to 5.0 mg CE/kg BW, and MIC and disk (30 µg) diffusion data. The following breakpoints are recommended by NCCLS.

“Susceptible” or “S” indicates that the pathogen is likely to be inhibited by generally achievable blood concentrations after treatment with ceftiofur sodium, ceftiofur hydrochloride or ceftiofur crystalline free acid. “Intermediate” or “I” is a technical buffer zone and isolates falling into this category should be retested. Alternatively the organism may be successfully treated if the infection is in a body site where drug is physiologically concentrated. “Resistant” or “R” indicates that the achievable drug concentrations are unlikely to be inhibitory and other therapy should be selected.

A separate study evaluated the injection site tissue tolerance of EXCEDE 100 Sterile Suspension when administered intramuscularly into each side of the neck at volumes of 2.7 to 5.2 mL/injection site. The animals were killed and the neck injection sites were dissected at 21, 28, 42, and 56 days post-injection (4 injection sites/time point). Areas of discoloration with cystic cavities (≤ 1 mm diameter) containing clear, oily material were observed grossly in the fascia at necropsy. These were observed in 3/4 sites at 21 days post-injection; 2/4 sites at 28 days; and 3/4 sites at 42 days. Injection of volumes greater than 2 mL/injection site could extend the duration of possible local irritant effects, and could lead to carcass trim at the site of injection.

• Treated swine must not be slaughtered for use in food for at least 49 days after the latest treatment with this drug.

• Non-observed withdrawal period, use of dosages in excess of those indicated or administration by unapproved routes may lead to illegal residues in tissues.

• Penicillins and cephalosporins can cause allergic reactions in sensitized individuals. Topical exposures to such antimicrobials, including ceftiofur, may elicit mild to severe allergic reactions in some individuals. Repeated or prolonged exposure may lead to sensitization. Avoid direct contact of the product with the skin, eyes, mouth and clothing. Sensitization of the skin may be avoided by wearing latex gloves. Persons with a known hypersensitivity to penicillin or cephalosporins should avoid exposure to this product. In case of accidental eye exposure, flush with water for 15 minutes. In case of accidental skin exposure, wash with soap and water. Remove contaminated clothing. If allergic reaction occurs (e.g., skin rash, hives, difficult breathing), seek medical attention.

• To limit the development of antimicrobial resistance:

• EXCEDE 100 Sterile Suspension should not be used as a mass medication.

• EXCEDE 100 Sterile Suspension should only be used to treat individual cases of swine respiratory disease.

• The choice of EXCEDE 100 Sterile Suspension as the most appropriate treatment should be confirmed by clinical experience supported where possible, by pathogen culture and drug susceptibility testing.

• The extra-label use of Excede 100 Sterile Suspension is not recommended.

• KEEP OUT OF REACH OF CHILDREN.

The use of EXCEDE 100 Sterile Suspension is contraindicated in animals previously found to be hypersensitive to the drug.

Store at a temperature between 15° and 25°C. Once broached, contents should be used within 12 weeks.

PRESENTATION: EXCEDE 100 Sterile Suspension is available in a 100 mL vial.

Zoetis is a trademark and Excede is a registered trademark of Zoetis or its licensors, used under license by Zoetis Canada Inc.