This page contains information on Clevor (Ropinirole Ophthalmic Solution) for veterinary use.
The information provided typically includes the following:

For ophthalmic use in dogs only

For induction of vomiting in dogs.

This product should be administered by veterinary personnel.

● Wear gloves and protective eye wear when handling or administering this product to prevent accidental exposure.

● Open the dropper by twisting off the tail. 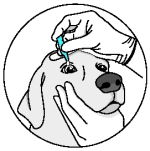 ● Keep the dog’s head steady in a slightly upright position.

● Hold the dropper in an upright position without touching the eye.

● Rest your finger on the forehead of your dog to maintain the distance between the dropper and the eye.

● Squeeze the prescribed number of drops in to the eye(s). 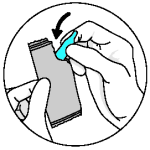 ● CLEVOR is a single use dropper and is light sensitive.

● After administration, with gloves on, return the dropper to the aluminum pouch and place in the carton. 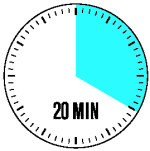 ● If the dog does not vomit, a second dose can be given 20 minutes after administration of the first dose.

● This second dose is the same number of drops as the first dose.

● Thirty minutes after opening, with gloves on, dispose of dropper, aluminum pouch, and carton.

Refer to the Animal Safety Warnings section for treatment of protracted vomiting.

Do not use in dogs with central nervous system depression or seizures.

Do not use in cases of ingestion of sharp foreign objects, corrosive agents (acids or alkalis), volatile substances or organic solvents.

Do not use in cases with corneal ulceration, ocular irritation, or ocular injury.

Do not use when there is a known sensitivity to ropinirole or the inactive ingredients.

Not for use in humans. Keep out of reach of children.

Wear gloves and protective eye wear when handling or administering this product to prevent accidental exposure. In case of accidental eye, oral or skin exposure, flush with water. If wearing contact lenses, eyes should be rinsed first, then remove contact lenses and continue rinsing. Remove contaminated clothing. Ropinirole is a dopamine agonist. Seek medical attention if accidental exposure occurs and show the package insert or label to the physician.

Exposure to this drug may cause adverse reactions such as headache, nausea, vomiting, dizziness, orthostatic hypotension, and sleepiness.

Avoid contact with the product if pregnant, planning to become pregnant, or breast-feeding, as exposure has been shown to have adverse effects on embryo-fetal development based on rodent studies.

This product should be administered by veterinary personnel.

Dogs should be monitored for CLEVOR-associated clinical signs, including protracted vomiting, salivation, muscle tremors, evidence of abdominal discomfort, lethargy, transient tachycardia, transient decrease in blood pressure and signs of ocular irritation, including conjunctival hyperemia, mild blepharospasm, and protrusion of the third eyelid. These clinical signs are related to the pharmacological action of ropinirole.

The safe use of CLEVOR has not been evaluated in dogs with cardiac disease or cardiovascular compromise. CLEVOR can cause transient tachycardia and transient decreased systolic blood pressure.

The safe use of CLEVOR has not been evaluated in dogs with hepatic impairment. CLEVOR is metabolized by the liver.

The safe use of CLEVOR has not been evaluated in dogs younger than 4.5 months of age and weight less than 4 pounds.

The safe use of CLEVOR has not been evaluated in dogs that are pregnant, lactating, or intended for breeding.

Safety was evaluated during a field study that enrolled 132 dogs (100 in the CLEVOR group and 32 in the vehicle control group). CLEVOR was administered as drops into the eyes at the dose as directed by the dosing table (see DOSAGE AND ADMINISTRATION). The following table shows the number of dogs exhibiting ocular, systemic, and clinical pathology adverse reactions.

Table 2. Adverse Reactions Reported During the Study (all dogs)

Note: If any animal experienced the event more than once, only the first occurrence was tabulated.

For additional information about adverse drug experience reporting for animal drugs, contact FDA at 1-888-FDA-VETS or online at www.fda.gov/reportanimalae.

Ropinirole is a full dopamine agonist with selectivity for the dopamine D2-like receptor family. Ropinirole induces vomiting by activating the D2-like receptors in the chemoreceptor trigger zone, located in the area postrema, which transmits the information to the vomiting center to trigger vomiting.

bound to plasma proteins in dogs has been reported as 37%.1

Metabolism and Elimination: Ropinirole is mainly eliminated by hepatic metabolism.1,2 The half-life of elimination (t1/2) is approximately 4 hours after intravenous administration to dogs. Biotransformation occurs by dealkylation, hydroxylation and subsequent conjugation with glucuronic acid or oxidation to carboxylic acid.3,4 Excretion occurs mainly as metabolites in the urine.

Effectiveness was demonstrated in a multi-center, vehicle-controlled, randomized and masked field study in client-owned dogs of various breeds. Dogs enrolled in the study were 7 months to 15 years of age and weighed 1.9 to 66.3 kg. In this study, 132 dogs were enrolled and randomized to treatment with CLEVOR (n=100) or vehicle control (n=32). The effectiveness evaluation population included 99 CLEVOR treated dogs and 29 vehicle control dogs.

Table 3. Number and % Effectiveness for CLEVOR and Vehicle Control

The time to first vomition, the number of times the dog vomited, and the description of vomit were evaluated as secondary variables and support the effectiveness of CLEVOR for induction of vomiting in dogs. Eighty-five dogs (86%) in the CLEVOR group vomited within 20 minutes and therefore did not require a second dose. The time to first vomition ranged from 3 minutes to 37 minutes with a mean of 12 minutes. The duration between first and last vomiting episodes ranged from 0 to 108 minutes with a mean duration of 23 minutes. Eight dogs had vomiting episodes over a duration longer than an hour. Five of these eight dogs were administered an antiemetic (metoclopramide). The number of vomits ranged from 0 to 13 vomits with a mean of 4.8 vomits per dog. Of the dogs that vomited, 96% of the dogs produced a vomit containing the meal that had been fed approximately one hour prior to CLEVOR administration.

Dogs in the CLEVOR groups generally vomited within 5 - 10 minutes of dose administration and none of the dogs in the saline group vomited. Vomiting occurred as often as every 1 - 2 minutes and lasted 1 - 2 hours. Additional systemic effects of CLEVOR included retching, salivation, hunched posture, tremors, labored breathing, lethargy, ventral and lateral recumbency, transient tachycardia, transient decrease in indirect systolic blood pressure (but not less than 125 mmHg), and a dose dependent decrease in body temperature (although all temperatures remained within normal limits). Local ocular effects of CLEVOR included ocular discharge, hyperemia, conjunctival erythema, blepharospasm, ptosis, third eyelid elevation, and positive corneal fluorescein staining. All CLEVOR-related observations resolved within 6 hours post-dosing. There was a dose dependent decrease in food consumption for dogs in the CLEVOR groups. Some dogs in the CLEVOR groups also had slight decreases in body weight. There were no effects on gross or microscopic pathology.

Store in the original package in order to protect from light at controlled room temperature 20-25°C (68-77°F) with excursions permitted to 15-30°C (59-86°F). After the first dosing, the opened dropper should be kept in the aluminum pouch. The content should be used and discarded within 30 minutes after opening the aluminum pouch.

CLEVOR is a trademark of Orion Corporation