This page contains information on A180 for veterinary use.
The information provided typically includes the following: 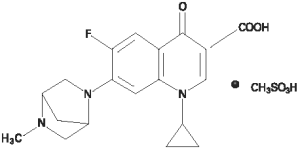 For the treatment of bovine respiratory disease associated with Mannheimia haemolytica and Pasteurella multocida.

Care should be taken to dose accurately. Administered dose volume should not exceed 15 mL per injection site.

*Administered dose volume should not exceed 15 mL per injection site.

Cautions: Quinolone-class drugs should be used with caution in animals with known or suspected central nervous system (CNS) disorders. In such animals, quinolones have, in rare instances, been associated with CNS stimulation, which may lead to convulsive seizures. Quinolone-class drugs have been shown to produce erosions of cartilage of weight-bearing joints and other signs of arthropathy in immature, rapidly growing animals of various species. Care should be taken to dose accurately. The effects of danofloxacin on bovine reproductive performance, pregnancy, and lactation have not been adequately determined. Subcutaneous injection can cause a local tissue reaction that may result in trim loss of edible tissue at slaughter.

Treated animals must not be slaughtered for use as food for at least 7 days after the latest treatment with this drug. Do not use in dairy cattle. Do not use in veal calves. The withdrawal period has not been established in pre-ruminating calves.

● Fluoroquinolone drugs such as A180 should not be used indiscriminately.

● A180 should not be used as an arrival treatment for feedlot cattle.

● A180 should only be used for treating individual cases of bovine respiratory disease after first choice treatments have failed.

● The choice of A180 as the most appropriate treatment should be confirmed by clinical experience supported where possible, by pathogen culture and drug susceptibility testing.

● Do not use in an extra-label manner in cattle or any other species.

Note: To reduce the possibility of excess trim at the injection site, it is recommended that cattle not be slaughtered for up to 21 days after the latest treatment with this drug.

A hypersensitivity reaction was noted in two (2) healthy calves treated with A180 Injectable Solution in a laboratory study. No adverse reactions attributable to the treatment were observed during the clinical field trials.

Danofloxacin distributes extensively throughout the body, as evidenced by a steady state volume of distribution (VDss) exceeding 1L/kg. Danofloxacin concentrations in the lung homogenates markedly exceed those observed in plasma, further suggesting extensive distribution to the indicated site of infection. Danofloxacin is rapidly eliminated from the body (apparent terminal elimination T1/2 ranging from 3 to 6 hours), and therefore negligible accumulation is expected to occur when animals are dosed twice, 48 hours apart. Danofloxacin is rapidly absorbed and is highly bioavailable when administered as a subcutaneous injection in the neck. No statistically significant gender difference was observed in peak or total systemic exposure following subcutaneous administration. Linear pharmacokinetics have been demonstrated when danofloxacin is administered by subcutaneous injection at doses up to 10-mg/kg.

Pharmacokinetic parameter values associated with a 6 mg/kg dose are provided in Table 2.

a Pharmacokinetic estimates based upon a 6 mg/kg subcutaneous injection administered into the lateral neck region. AUC0-24 = area under the plasma concentration versus time curve from hr zero to hr 24 postdose; Cmax = maximum observed concentration. Tmax = time to Cmax.

b F = extent of drug absorption following subcutaneous administration. Within subject F values were determined as the ratio of AUC0-inf values estimated following a 6-mg/kg dose administered as either a subcutaneous or intravenous injection

c Tmax: statistically significant differences were detected between genders. Given the similarity in Cmax values, these differences are not expected to have any clinical significance.

d CL (clearance) and VDss (steady state volume of distribution) were determined from data obtained after intravenous administration of a 6 mg/kg dose.

Microbiology: Danofloxacin exerts its activity by inhibiting the bacterial DNA gyrase enzyme, thereby blocking DNA replication. Inhibition of DNA gyrase is lethal to bacteria and danofloxacin has been shown to be bactericidal. Danofloxacin is active in vitro against gram-negative and gram-positive bacteria. The Minimum Inhibitory Concentrations (MIC) of danofloxacin were determined for isolates obtained from natural infections in cattle in the United States and Canada, from 1994 to 1997 (Table 3), using the standardized microdilution technique (SENSITITRE/ALAMAR, Accumed International).

* The minimum inhibitory concentration for 90% or more of the isolates.

*The correlation between in vitro susceptibility data and clinical effectiveness is unknown.

**The lowest MIC to encompass 50% and 90% of the most susceptible isolates, respectively.

a Insufficient data were available to establish breakpoints for the Intermediate (I) and Resistant (R) categories. Zone sizes smaller than 22 mm or MIC values greater than 0.25 µg/mL suggest a decreased susceptibility compared to susceptible (S) strains.

Safety was also evaluated in 21-day-old calves. In one group, these immature animals were given injections of 6 mg/kg on study days 0, 2, 3, 5, 6, and 8. A second group of animals received injections of 18 mg/kg for a total of two injections 48 hours apart. The only treatment-related sign was erythema of the sclera and nasal pad in calves that received 18 mg/kg.

No changes in clinical pathology parameters were observed. No articular cartilage lesions were observed in the joints at any dosage. An injection site study conducted in feeder calves demonstrated that the product may induce a reaction in the subcutaneous tissue and the underlying muscle.

Efficacy Confirmation: A180 Injectable Solution has been shown in clinical field trials to be effective in the treatment of bovine respiratory disease associated with Mannheimia haemolytica and Pasteurella multocida. Bacterial pathogens isolated in clinical field studies are provided in the Microbiology section.

Store at or below 30°C. Protect from light and from freezing. The color is yellow to amber. Color does not affect potency.

Zoetis is a trademark and A180 is a registered trademark of Zoetis or its licensors, used under license by Zoetis Canada Inc.