Rituxan: 7 things you should know

Rituxan is a CD20 monoclonal antibody that causes B-cells to self-destruct or disintegrate and may be used to treat Non-Hodgkin's lymphoma (NHL), chronic lymphocytic leukemia (CLL), rheumatoid arthritis (RA), and some other conditions. Infusion-related reactions, fever, lymphopenia, neutropenia, chills, infection, pain, night sweats, rash, itch, and asthenia are the most common side effects reported. It must be given by a health professional as an IV infusion and the rate and frequency of infusion depend on the condition being treated and how well the infusion is tolerated.

Medicines that interact with Rituxan may either decrease its effect, affect how long it works for, increase side effects, or have less of an effect when taken with Rituxan. An interaction between two medications does not always mean that you must stop taking one of the medications; however, sometimes it does. Speak to your doctor about how drug interactions should be managed.

Common medications that may interact with Rituxan include:

Rituxan may have additive immune-suppressing effects when given with any other medications such as anticancer drugs, immune-modulating, or immunosuppressive therapies, which may increase a person's risk for infection. Take this into account when switching from drugs with prolonged immune effects.

Note that this list is not all-inclusive and includes only common medications that may interact with Rituxan. You should refer to the prescribing information for Rituxan for a complete list of interactions.

Remember, keep this and all other medicines out of the reach of children, never share your medicines with others, and use Rituxan only for the indication prescribed. 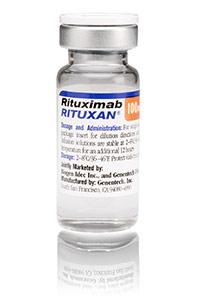