Note: This document contains side effect information about abacavir. Some dosage forms listed on this page may not apply to the brand name Ziagen.

Common side effects of Ziagen include: arthralgia, cough, fatigue, lethargy, myalgia, pruritus, vomiting, chills, and malaise. Other side effects include: hypersensitivity condition, pharyngitis, and tachypnea. Continue reading for a comprehensive list of adverse effects.

Serious side effects of Ziagen

Along with its needed effects, abacavir (the active ingredient contained in Ziagen) may cause some unwanted effects. Although not all of these side effects may occur, if they do occur they may need medical attention.

Check with your doctor immediately if any of the following side effects occur while taking abacavir:

Other side effects of Ziagen

Some side effects of abacavir may occur that usually do not need medical attention. These side effects may go away during treatment as your body adjusts to the medicine. Also, your health care professional may be able to tell you about ways to prevent or reduce some of these side effects.

In 1 study, patients receiving the once-daily regimen had a significantly higher incidence of severe drug hypersensitivity reactions and severe diarrhea than patients on the twice-daily regimen.

Many of the side effects listed occurred commonly in patients with abacavir (the active ingredient contained in Ziagen) hypersensitivity (e.g., nausea, vomiting, diarrhea, fever, lethargy, rash).[Ref]

In 1 case report, a 57-year-old HIV-positive male presented to medical attention with a 2-day history of fever, malaise, and diarrhea related to initiation of this drug. Six days prior to the onset of symptoms, the patient's antiretroviral therapy was switched from efavirenz and lamivudine-zidovudine to zidovudine, abacavir, and lopinavir-ritonavir after a drop in his CD4 cell count. The patient developed acute dyspnea and severe hypoxemia, hemoptysis, and diffuse bilateral pulmonary infiltrates within 72 hours of admission and this drug was discontinued due to suspicion of a hypersensitivity reaction. Three days after drug discontinuation, the patient's status improved and chest films showed resolution of infiltrates.[Ref]

In 1 case report, a 31-year-old HIV-infected male patient switched to this drug and experienced a disulfiram-like reaction with nausea, facial flushing, and tachycardia after alcohol consumption. When the patient was rechallenged with a shot of vodka, the same reaction occurred.

In another case, a 27-year-old HIV-infected male patient switched to this drug and noticed reduced alcohol tolerance. The patient reported that he felt as if he had ingested 1.5 bottles of wine after 3 glasses, with loss of memory until the next morning and vomiting. The patient was able to tolerate small quantities of alcohol or alcohol consumed with food.[Ref]

Elevated creatine phosphokinase (greater than 4 times the upper limit of normal [4 x ULN]) has been reported in up to 8% of patients.[Ref]

Very common (10% or more): Elevated creatine phosphokinase (up to 12%)

Suspected Stevens-Johnson syndrome (SJS) and toxic epidermal necrolysis (TEN) have been reported during postmarketing experience in patients using this drug primarily in combination with agents known to be associated with SJS and TEN, respectively.

Cases of erythema multiforme, SJS, or TEN have been reported very rarely when abacavir (the active ingredient contained in Ziagen) hypersensitivity could not be ruled out.[Ref]

Very common (10% or more): Skin rashes (maculopapular, urticarial, or variable appearance; up to 11%)

Increased GGT was observed in the expanded access program.

Agranulocytosis has been reported after the addition of this drug to a multi-drug regimen.[Ref]

An observational study investigating the rate of MI in patients on combination antiretroviral therapy showed an increased risk of MI with the use of this drug within the previous 6 months. A sponsor-conducted pooled analysis of clinical trials showed no excess risk of MI in abacavir-treated patients as compared with control subjects. Overall, available data from the observational cohort and from clinical trials were inconclusive.[Ref]

8. AIDSinfo. NIH. National Institutes of Health "Guidelines for the use of antiretroviral agents in pediatric HIV infection. http://aidsinfo.nih.gov/contentfiles/lvguidelines/pediatricguidelines.pdf" (2015):

9. HHS Panel on Antiretroviral Guidelines for Adults and Adolescents. Office of AIDS Research Advisory Council (OARAC). NIH. National Institutes of Health "Guidelines for the use of antiretroviral agents in HIV-1-infected adults and adolescents. http://aidsinfo.nih.gov/contentfiles/lvguidelines/adultandadolescentgl.pdf" (2015): 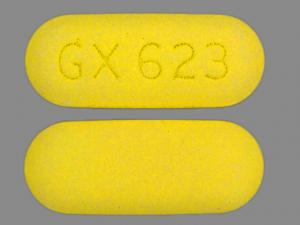