Indications and Usage for Purinethol

Purinethol is indicated for treatment of adult and pediatric patients with acute lymphoblastic leukemia (ALL) as part of a combination chemotherapy maintenance regimen.

The recommended starting dosage of Purinethol is 1.5mg/kg to 2.5 mg/kg orally once daily as part of combination chemotherapy maintenance regimen. A recommended dosage for patients less than 17 kg is not achievable, because the only available strength is 50 mg. Take Purinethol either consistently with or without food.

After initiating Purinethol, monitor complete blood count (CBC) and adjust the dose to maintain absolute neutrophil count (ANC) at a desirable level and for excessive myelosuppression. Evaluate the bone marrow in patients with prolonged myelosuppression or repeated episodes of myelosuppression to assess leukemia status and marrow cellularity.

Do not administer to patients who are unable to swallow tablets.

If a patient misses a dose, instruct the patient to continue with the next scheduled dose.

Dosage Modifications in Patients with TPMT and NUDT15 Deficiency

Homozygous Deficiency in either TPMT or NUDT15

Heterozygous Deficiency in TPMT and/or NUDT15

Reduce the Purinethol dose based on tolerability. Most patients with heterozygous TPMT or NUDT15 deficiency tolerate the recommended dosage, but some require a dose reduction based on adverse reactions. Patients who are heterozygous for both TPMT and NUDT15 may require more substantial dose reductions.

Use the lowest recommended starting dosage for Purinethol in patients with renal impairment (CLcr less than 50 mL/min). Adjust the dosage to maintain absolute neutrophil count (ANC) at a desirable level and for adverse reactions [see Uses in Specific Populations (8.6)] .

Use the lowest recommended starting dosage for Purinethol in patients with hepatic impairment. Adjust the dosage to maintain absolute neutrophil count (ANC) at a desirable level and for adverse reactions [see Uses in Specific Populations (8.7)] .

Dosage Modification with Concomitant Use of Allopurinol

Reduce the dose of Purinethol to one-third to one-quarter of the current dosage when coadministered with allopurinol [see Drug Interactions (7.1)] .

The most consistent, dose-related adverse reaction is myelosuppression, manifested by anemia, leukopenia, thrombocytopenia, or any combination of these. Monitor CBC and adjust the dosage of Purinethol for excessive myelosuppression [see Dosage and Administration (2.1)] .

Consider testing for TPMT or NUDT15 deficiency in patients with severe myelosuppression or repeated episodes of myelosuppression. TPMT genotyping or phenotyping (red blood cell TPMT activity) and NUDT15 genotyping can identify patients who have reduced activity of these enzymes. Patients with heterozygous or homozygous TPMT or NUDT15 deficiency may require a dose reduction [see Dosage and Administration (2.2),Clinical Pharmacology (12.5)] .

Mercaptopurine is hepatotoxic. There are reports of deaths attributed to hepatic necrosis associated with the administration of mercaptopurine. Hepatic injury can occur with any dosage but seems to occur with greater frequency when the recommended dosage is exceeded. In some patients, jaundice has cleared following withdrawal of mercaptopurine and reappeared with rechallenge.

Usually, clinically detectable jaundice appears early in the course of treatment (1 to 2 months); however, jaundice has been reported as early as 1 week and as late as 8 years after the starting mercaptopurine. The hepatotoxicity has been associated in some cases with anorexia, diarrhea, jaundice and ascites. Hepatic encephalopathy has occurred.

Mercaptopurine is immunosuppressive and may impair the immune response to infectious agents or vaccines. Due to the immunosuppression associated with maintenance chemotherapy for ALL, response to all vaccines may be diminished and there is a risk of infection with live virus vaccines. Consult immunization guidelines for immunocompromised patients.

Hepatosplenic T-cell lymphoma has been reported in patients treated with mercaptopurine for inflammatory bowel disease (IBD), an unapproved use. Mercaptopurine is mutagenic in animals and humans, carcinogenic in animals, and may increase the risk of secondary malignancies.

Patients receiving immunosuppressive therapy, including mercaptopurine, are at an increased risk of developing lymphoproliferative disorders and other malignancies, notably skin cancers (melanoma and non-melanoma), sarcomas (Kaposi's and non-Kaposi's) and uterine cervical cancer in situ. The increased risk appears to be related to the degree and duration of immunosuppression. It has been reported that discontinuation of immunosuppression may provide partial regression of the lymphoproliferative disorder.

A treatment regimen containing multiple immunosuppressants (including thiopurines) should therefore be used with caution as this could lead to lymphoproliferative disorders, some with reported fatalities. A combination of multiple immunosuppressants, given concomitantly increases the risk of Epstein-Barr virus (EBV)-associated lymphoproliferative disorders.

Macrophage activation syndrome (MAS) (hemophagocytic lymphohistiocytosis) is a known, life-threatening disorder that may develop in patients with autoimmune conditions, in particular with inflammatory bowel disease (IBD), and there could potentially be an increased susceptibility for developing the condition with the use of mercaptopurine (an unapproved use). If MAS occurs, or is suspected, discontinue Purinethol. Monitor for and promptly treat infections such as EBV and cytomegalovirus (CMV), as these are known triggers for MAS.

Drug fever has been reported with mercaptopurine.

Additional adverse reactions that have been reported in patients who have received mercaptopurine include photosensitivity, hypoglycemia, and portal hypertension.

Allopurinol can inhibit the first-pass oxidative metabolism of mercaptopurine by xanthine oxidase, which can lead to an increased risk of mercaptopurine adverse reactions (i.e., myelosuppression, nausea, and vomiting) [see Warnings and Precautions (5.1), Adverse Reactions (6.1)] . Reduce the dose of Purinethol when coadministered with allopurinol [see Dosage and Administration (2.4)] .

The concomitant administration of Purinethol and warfarin may decrease the anticoagulant effectiveness of warfarin. Monitor the international normalized ratio (INR) in patients receiving warfarin and adjust the warfarin dosage as appropriate.

Purinethol can cause fetal harm when administered to a pregnant woman [see Clinical Pharmacology (12.1)] . Pregnant women who receive mercaptopurine have an increased incidence of miscarriage and stillbirth (see Data) . Advise pregnant women of the potential risk to a fetus.

Mercaptopurine was embryo-lethal and teratogenic in several animal species (rat, mouse, rabbit, and hamster) at doses less than the recommended human dose.

Purinethol can cause fetal harm when administered to pregnant women [see Use in Specific Populations (8.1)] .

Verify the pregnancy status in females of reproductive potential prior to initiating Purinethol [see Use in Specific Populations (8.1)] .

Advise females of reproductive potential to use effective contraception during treatment with Purinethol and for 6 months after the last dose.

Based on genotoxicity findings, advise males with female partners of reproductive potential to use effective contraception during treatment with Purinethol and for 3 months after the last dose [see Nonclinical Toxicology (13.1)] .

Clinical studies of mercaptopurine did not include sufficient numbers of subjects aged 65 and over to determine whether they respond differently from younger subjects. Other reported clinical experience has not identified differences in responses between the elderly and younger patients. In general, dose selection for an elderly patient should be cautious, usually starting at the low end of the dosing range, reflecting the greater frequency of decreased hepatic, renal, or cardiac function, and of concomitant disease or another drug therapy.

Use the lowest recommended starting dosage for Purinethol or increase the dosing interval to every 36-48 hours in patients with renal impairment (CLcr less than 50 mL/min). Adjust the dose to maintain absolute neutrophil count (ANC) at a desirable level and for adverse reactions [see Dosage and Administration (2.3)] .

Use the lowest recommended starting dosage for Purinethol in patients with hepatic impairment. Adjust the dose to maintain absolute neutrophil count (ANC) at a desirable level and for adverse reactions [see Dosage and Administration (2.3)] .

Signs and symptoms of mercaptopurine overdosage may be immediate (anorexia, nausea, vomiting, and diarrhea); or delayed (myelosuppression, liver dysfunction, and gastroenteritis). Dialysis cannot be expected to clear mercaptopurine. Hemodialysis is thought to be of marginal use due to the rapid intracellular incorporation of mercaptopurine into active metabolites with long persistence.

Withhold Purinethol immediately if severe or life-threatening adverse reactions occur during treatment. If a patient is seen immediately following an accidental overdosage, it may be useful to induce emesis.

Mercaptopurine is a nucleoside metabolic inhibitor. The chemical name is 6 H-purine-6-thione, 1,7-dihydro-, monohydrate. The molecular formula is C 5H 4N 4S•H 2O and the molecular weight is 170.20. Its structural formula is: 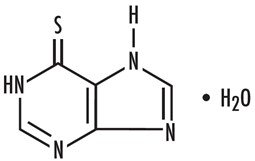 Mercaptopurine is a yellow, crystalline powder. Mercaptopurine is practically insoluble in water and in ether. It has a pKa of 7.8, an average tapped density of 1.0 g/mL and average bulk density of 0.85 g/mL. It dissolves in solutions of alkali hydroxides.

Mercaptopurine exposure-response relationships and the time course of pharmacodynamics response are unknown.

Following a single oral dose of mercaptopurine 50 mg under fasted conditions to adult healthy subjects, the mean AUC 0-INF was 129 h•ng/mL and C max was 69 ng/mL.

Food has been shown to decrease the exposure of mercaptopurine.

The volume of distribution usually exceeded that of the total body water. There is negligible entry of mercaptopurine into cerebrospinal fluid.

Plasma protein binding averages 19% over the concentration range 10 to 50 mcg/mL (a concentration only achieved by intravenous administration of mercaptopurine at doses exceeding 5 to 10 mg/kg).

The elimination half-life is less than 2 hours following a single oral dose.

Mercaptopurine is inactivated via two major pathways. One is thiol methylation, which is catalyzed by the polymorphic enzyme thiopurine S-methyltransferase (TPMT), to form the inactive metabolite methyl-mercaptopurine. The second inactivation pathway is oxidation, which is catalyzed by xanthine oxidase. The product of oxidation is the inactive metabolite 6-thiouric acid.

Following the oral administration of radiolabeled mercaptopurine, 46% of the dose was recovered in the urine (as parent drug and metabolites) in the first 24 hours.

Approximately 0.3% (1:300) of patients of European or African ancestry have two loss-of-function alleles of the TPMT gene and have little or no TPMT activity (homozygous deficient or poor metabolizers), and approximately 10% of patients have one loss-of-function TPMT allele leading to intermediate TPMT activity (heterozygous deficient or intermediate metabolizers). The TPMT *2, TPMT *3A, and TPMT *3C alleles account for about 95% of individuals with reduced levels of TPMT activity.

Consider all clinical information when interpreting results from phenotypic testing used to determine the level of thiopurine nucleotides or TPMT activity in erythrocytes, since some coadministered drugs can influence measurement of TPMT activity in blood and blood from recent transfusions will misrepresent a patient’s actual TPMT activity [see Dosage and Administration (2.2), Warnings and Precautions (5.1)] .

Mercaptopurine is carcinogenic in animals.

Mercaptopurine causes chromosomal aberrations in cells derived from animals and humans and induces dominant-lethal mutations in the germ cells of male mice.

Mercaptopurine can impair fertility. In mice, surviving female offspring of mothers who received chronic low doses of mercaptopurine during pregnancy were found sterile, or if they became pregnant, had smaller litters and more dead fetuses as compared to control animals.

Purinethol is supplied as biconvex, round, pale yellow to buff, scored tablets containing 50 mg mercaptopurine, imprinted with “9|3” available in:

Advise patients and caregivers that Purinethol can cause myelosuppression, hepatotoxicity, and gastrointestinal toxicity. Advise patients to contact their healthcare provider if they experience fever, sore throat, jaundice, nausea, vomiting, signs of local infection, bleeding from any site, or symptoms suggestive of anemia [see Warnings and Precautions (5.1, 5.2, 5.3)] .

Advise women not to breastfeed during treatment with Purinethol and for 1 week after the last dose [see Use in Specific Populations (8.2)] .

Advise males and females of reproductive potential that Purinethol can impair fertility [see Use in Specific Populations (8.3)] .

Distributed by:
Stason Pharmaceuticals
Irvine, CA 92618
Made in U.S.A.

WARNING: This drug is only to be

sion. Do not take in larger doses or

more frequently or for a longer time

than specifically directed by the

and to avoid ill effects.

Temperature.] Store in a dry place. 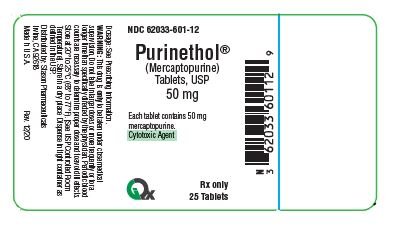 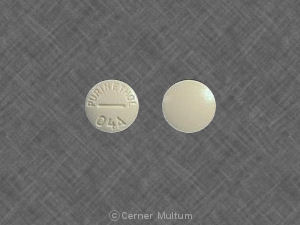