Indications and Usage for Monoferric

Monoferric is indicated for the treatment of iron deficiency anemia (IDA) in adult patients:

For patients weighing 50 kg or more: Administer 1,000 mg of Monoferric by intravenous infusion over at least 20 minutes as a single dose. Repeat dose if iron deficiency anemia reoccurs.

Only administer Monoferric when personnel and therapies are immediately available for the treatment of serious hypersensitivity reactions ( Warnings and Precautions (5.1)) .

Inspect parenteral drug products visually for the absence of particulate matter and discoloration prior to administration. The product contains no preservatives.

Each vial of Monoferric is single-dose only. Discard unused portion.

Monoferric is contraindicated in patients with a history of serious hypersensitivity to Monoferric or any of its components (see Warnings and Precautions (5.1), Description (11)) . Reactions have included shock, clinically significant hypotension, loss of consciousness, and/or collapse.

In the two randomized, actively-controlled clinical trials, Trial 1 and Trial 2 (see Clinical Studies (14)) , patients were randomized in a 2:1 ratio to intravenous Monoferric (n = 2008) or intravenous iron sucrose (n = 1000) respectively. Monoferric was administered as a single intravenous infusion of 1000 mg diluted in 100 mL 0.9 % sodium chloride and given over approximately 20 minutes (approximately 50 mg iron/min). Iron sucrose was administered as 200 mg undiluted intravenous injections over approximately 2-5 minutes and repeated according to standard practice or physician choice up to a maximum of five times (1000 mg) within the first two weeks starting at baseline.

The data described below reflect exposure to Monoferric in 2008 patients exposed to a 1000 mg single intravenous dose of Monoferric. The mean cumulative intravenous Iron exposure was 984 mg.

Trial 1 included 1483 patients with iron deficiency anemia in the safety analysis that had intolerance to oral iron or have had unsatisfactory response to oral iron or with a clinical need for rapid repletion of iron stores. Trial 2 included 1525 patients in the safety analysis who had non-dialysis dependent CKD. The mean (SD) age of the combined study population was 56.4 (18.3) years. The majority of patients were women (75.7%).

Adverse reactions were reported in 8.6% (172/2008) of patients treated with Monoferric.

Adverse reactions related to treatment and reported by ≥1% of the treated patients in the combined analysis of Trial 1 and 2 are listed in Table 1.

Adjudicated serious or severe hypersensitivity reactions were reported in 6/2008 (0.3%) patients in the Monoferric group.

Hypophosphatemia (serum phosphate <2.0 mg/dL) was reported in 3.5% of Monoferric-treated patients in Trials 1 & 2.

Because these reactions are reported voluntarily from a population of uncertain size, it is not always possible to reliably estimate their frequency or establish a causal relationship to drug exposure. The following adverse reactions have been most commonly reported from the post-marketing spontaneous reports with Monoferric:

Extravasation of Monoferric at the injection site that may lead to irritation of the skin and potentially long lasting brown discoloration at the site of injection has also been reported.

There are no available data on Monoferric use in pregnant women to evaluate for a drug-associated risk of major birth defects, miscarriage or adverse maternal or fetal outcomes. Published studies on the use of intravenous iron products in pregnant women have not reported an association with adverse developmental outcomes. However, these studies cannot establish or exclude the absence of any drug-related risk during pregnancy because the studies were not designed to assess for the risk of major birth defects ( see Data) . There are risks to the mother and fetus associated with untreated iron deficiency anemia (IDA) in pregnancy as well as risks to the fetus associated with maternal severe hypersensitivity reactions ( see Clinical Considerations) . Iron complexes have been reported to be teratogenic and embryocidal in non-iron depleted pregnant animals. The findings in animals may be due to iron overload and may not be applicable to patients with iron deficiency. Animal reproduction studies of ferric derisomaltose administered to rats and rabbits during the period of organogenesis caused adverse developmental outcomes including structural abnormalities and embryo-fetal mortality at doses approximately 0.09 and 0.4 times the maximum recommended human dose (MRHD) of 1000 mg, respectively, based on body surface area ( see Data) .

Severe adverse reactions including circulatory failure (severe hypotension, shock including in the context of anaphylactic reaction) may occur in pregnant women with parenteral iron products (such as Monoferric) which may cause fetal bradycardia, especially during the second and third trimester.

In a combined fertility and embryo-fetal development study in rats, ferric derisomaltose was administered intravenously to female rats 14 days prior to cohabitation and through gestation day (GD) 17 at doses of 3, 11, and 32 mg Fe/kg/day. The doses of 11 and 32 mg Fe/kg/day (approximately 0.1 and 0.3 times the MRHD of 1000 mg, based on body surface area (BSA)) resulted in an increase in the incidence of skeletal developmental delays.

Ferric derisomaltose was administered intravenously to pregnant rabbits during organogenesis, from GD7 to GD20, at doses of 11, 25 and 43 mg Fe/kg/day. The dose of 43 mg Fe/kg/day (approximately 0.8 times the MRHD of 1000 mg, based on BSA) resulted in increased maternal mortality, abortion, and premature delivery, and increased postimplantation loss. Adverse developmental findings at this dose included fetal mortality, reduced fetal weights, and fetal developmental variations and malformations (including domed head, cleft palate, microglossia, hydrocephaly, small brain). Fetal malformations and reduced fetal weights were also noted in the 25 mg Fe/kg/day group (approximately 0.5 times the MRHD based on BSA).

The available data on the use of Monoferric in lactating women demonstrate that iron is present in breast milk. However, the data do not inform the potential exposure of iron for the breastfed child or the effects on milk production. The developmental and health benefits of breastfeeding should be considered along with the mother's clinical need for Monoferric in addition to any potential adverse effects on the breastfed child from the drug or from the underlying maternal condition.

Safety and effectiveness have not been established in pediatric patients.

Of the 3934 patients in clinical studies of Monoferric, 29% were 65 years and over, while 13% were 75 years and over. No overall differences in safety or effectiveness were observed between these patients and younger subjects, and other reported clinical experience has not identified differences in responses between the elderly and younger patients, but greater sensitivity of some older individuals cannot be ruled out.

Excessive dosages of Monoferric may lead to accumulation of iron in storage sites potentially leading to hemosiderosis and hemochromatosis. Avoid use of Monoferric in patients with iron overload (see Warnings and Precautions (5.2)) .

Ferric derisomaltose has an average molecular weight of 155,000 Da and has the following empirical formula:

Iron atoms placed in the electronegative cavities of the 3-D structure between and within the derisomaltose molecules. A schematic representation is presented below 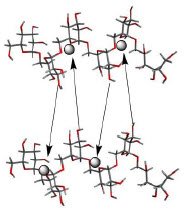 Monoferric is a sterile, dark brown, non-transparent aqueous solution with pH 5.0-7.0, containing ferric derisomaltose dissolved in water for injections and filled into Type I glass vials.

Each 1 mL of solution contains 100 mg of elemental iron as ferric derisomaltose in water for injection, hydrochloric acid and sodium hydroxide may be used to adjust pH.

Ferric derisomaltose is a complex of iron (III) hydroxide and derisomaltose, an iron carbohydrate oligosaccharide that releases iron. Iron binds to transferrin for transport to erythroid precursor cells to be incorporated into hemoglobin.

Serum ferritin peaks approximately 7 days after an intravenous dose of Monoferric and slowly returns to stable levels after about 4 weeks.

Electrocardiogram (ECG) monitoring for QT prolongation was performed in a sub-study in 35 patients randomized to Monoferric in Trial 1. No large mean increase in QTc (i.e. >20 ms) interval was detected at the 1000 mg single dose of Monoferric.

The pharmacokinetics of total iron (derisomaltose-bound plus transferrin-bound iron) were evaluated in adult patients with IDA.

Circulating iron is removed from the plasma by cells of the reticuloendothelial system. The iron is bound to the available protein moieties to form hemosiderin or ferritin, the physiological storage forms of iron, or to a lesser extent, to the transport molecule transferrin.

Due to the size of the complex, Monoferric is not excreted via the kidneys. Small quantities of iron are excreted in urine and feces.

Carcinogenicity studies have not been conducted.

Iron oligosaccharide, an earlier formulation of ferric derisomaltose, was not genotoxic in an in vitro bacterial reverse mutation assay, an in vitro chromosomal aberrations test and an in vivo mouse micronucleus assay.

The safety and efficacy of Monoferric for treatment of iron deficiency anemia (IDA) were evaluated in two randomized, open-label, actively-controlled clinical trials performed in a total of 3050 patients with IDA of different etiology. Trial 1 included patients with IDA who had intolerance to oral iron or who had had unsatisfactory response to oral iron or for whom there was a clinical need for rapid repletion of iron stores. Trial 2 included patients with IDA who had non-dialysis dependent chronic kidney disease (NDD-CKD). In these two 8-Week trials, patients were randomized 2:1 to treatment with Monoferric or iron sucrose. Monoferric was intravenously administered as a single dose of 1000 mg.

In Trial 1 (NCT02940886) 1512 adult patients with IDA caused by different etiologies, who had documented intolerance or lack of response to oral iron or screening hemoglobin (Hb) measurement sufficiently low to require repletion of iron stores were randomized in a 2:1 ratio to treatment with Monoferric or iron sucrose. Adult patients aged ≥18 years with baseline Hb ≤11 g/dL, TSAT <20 %, and s-ferritin <100 ng/mL were eligible for enrollment. The median age of patients was 44 years (range 18-91) and 89 % were women.

The efficacy of Monoferric was established based upon the demonstration of non-inferiority for change in hemoglobin from baseline to Week 8 (Table 3).

When added to an infusion bag containing 0.9% Sodium Chloride Injection, USP, Monoferric solution may be stored for up to 8 hours at room temperature.

Prior History of Allergies to Parenteral Iron Products

Question patients regarding any prior history of reactions to parenteral iron products (see Warnings and Precautions (5.1)) .

Advise patients to report any signs and symptoms of hypersensitivity that may develop during and following Monoferric administration, such as rash, itching, dizziness, lightheadedness, swelling and breathing problems (see Warnings and Precautions (5.1)) . 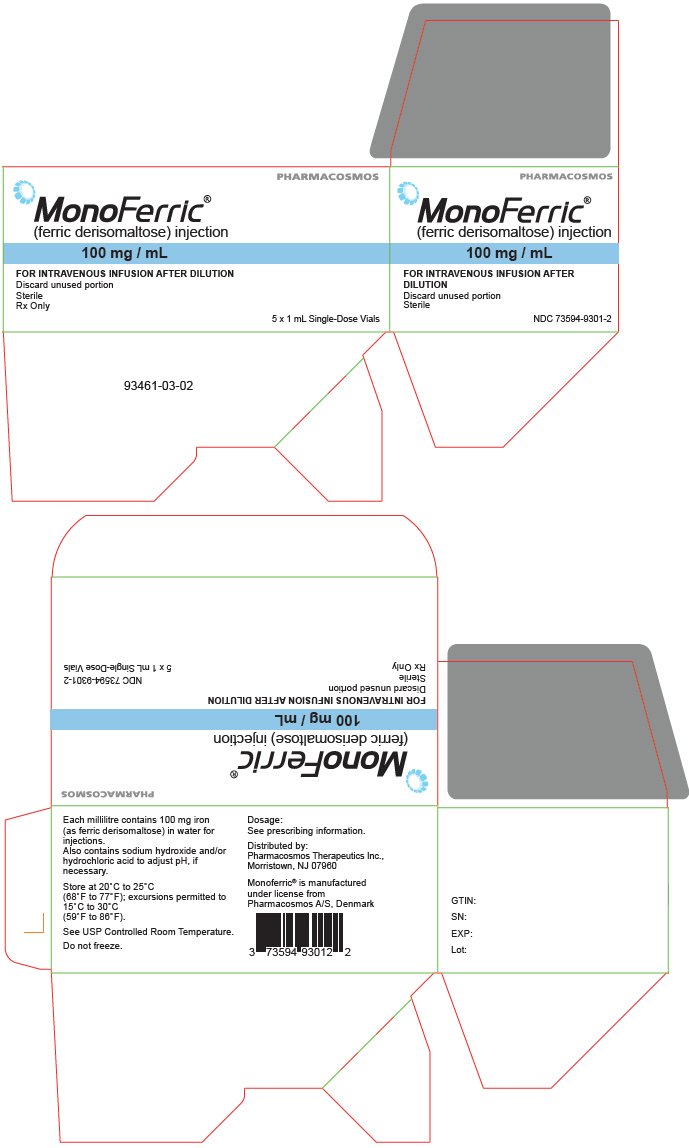 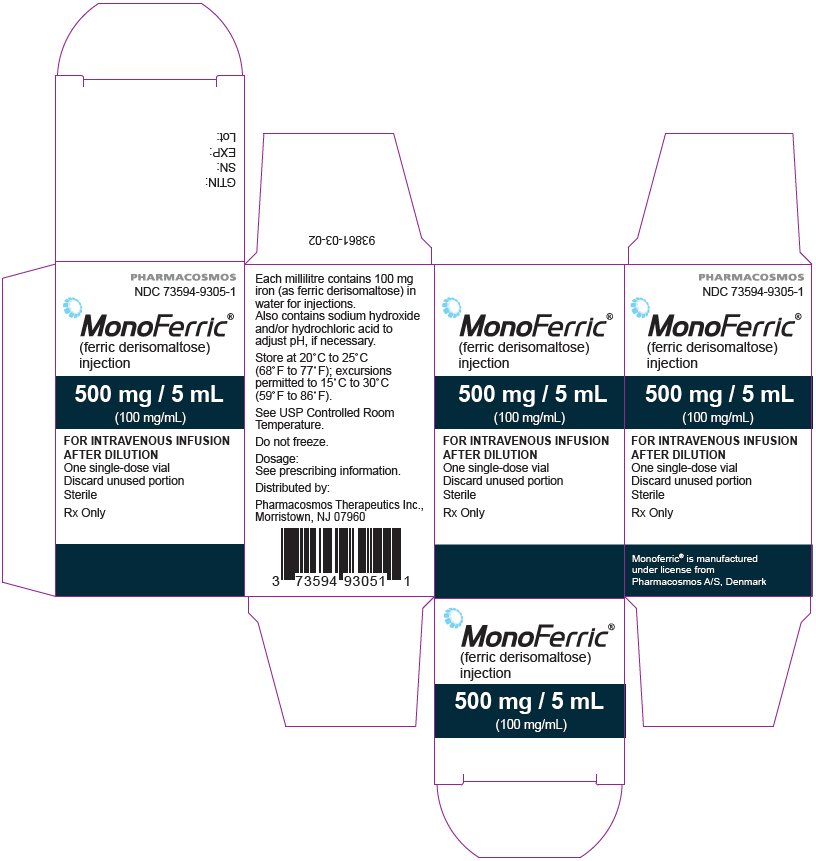 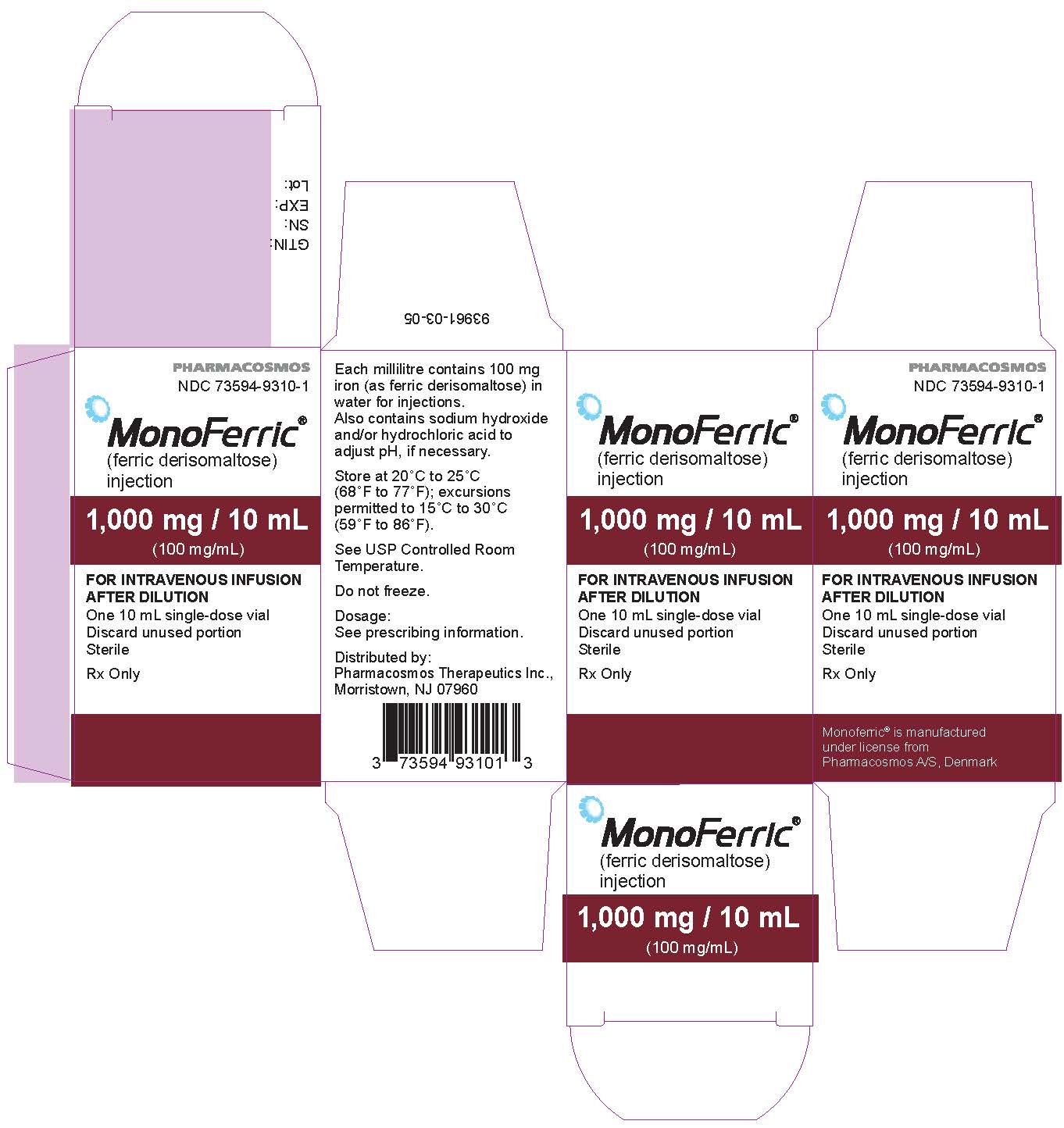 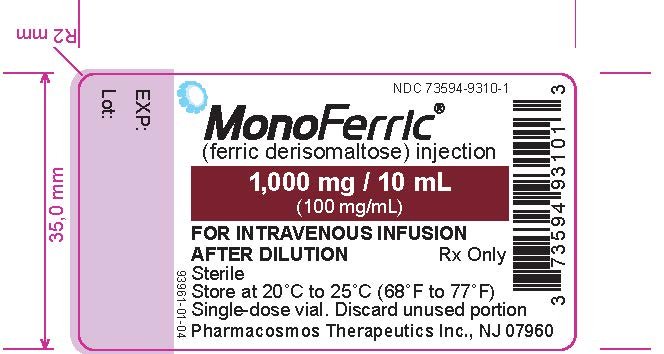