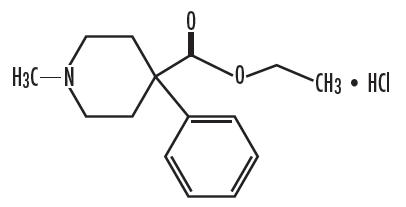 Promethazine hydrochloride occurs as a white to faint yellow, practically odorless, crystalline powder which slowly oxidizes and turns blue on prolonged exposure to air. It is freely soluble in water and soluble in alcohol.

Chemically, Promethazine hydrochloride is (10H-phenothiazine-10-ethanamine, N,N,α-trimethyl-, monohydrochloride, (±)-) is a racemic compound and has the following structural formula: 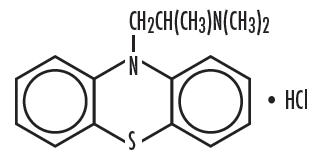 Meperidine hydrochloride is a narcotic analgesic with multiple actions qualitatively similar to those of morphine; the most prominent of these involve the central nervous system and organs composed of smooth muscle. The principal actions of therapeutic value are analgesia and sedation.

There is some evidence which suggests that meperidine may produce less smooth muscle spasm, constipation, and depression of the cough reflex than equianalgesic doses of morphine.

Promethazine is a phenothiazine derivative which differs structurally from the antipsychotic phenothiazines by the presence of a branched side chain and no ring substitution. It is thought that this configuration is responsible for its relative lack (1/10 that of chlorpromazine) of dopamine antagonist properties.

Promethazine is an H1 receptor-blocking agent. In addition to its antihistaminic action, it provides clinically useful sedative and antiemetic effects.

Promethazine is well absorbed from the gastrointestinal tract. Clinical effects are apparent within 20 minutes after oral administration and generally last 4 to 6 hours, although they may persist as long as 12 hours. Promethazine is metabolized by the liver to a variety of compounds; the sulfoxides of promethazine and N-demethylpromethazine are the predominant metabolites appearing in the urine.

Hypersensitivity to meperidine or promethazine.

Meperidine is contraindicated in patients who are receiving monoamine oxidase inhibitors (MAOI) or those who have received such agents within 14 days. Therapeutic doses of meperidine have inconsistently precipitated unpredictable, severe, and occasionally fatal reactions in patients who have received such agents within 14 days. The mechanism of these reactions is unclear. Some have been characterized by coma, severe respiratory depression, cyanosis, and hypotension and have resembled the syndrome of acute narcotic overdose. In other reactions the predominant manifestations have been hyperexcitability, convulsions, tachycardia, hyperpyrexia, and hypertension. Although it is not known that other narcotics are free of the risk of such reaction, virtually all of the reported reactions have occurred with meperidine. If a narcotic is needed in such patients, a sensitivity test should be performed in which repeated, small, incremental doses of morphine are administered over the course of several hours while the patient's condition and vital signs are under careful observation.

(Intravenous hydrocortisone or prednisolone have been used to treat severe reactions, with the addition of intravenous chlorpromazine in those cases exhibiting hypertension and hyperpyrexia. The usefulness and safety of narcotic antagonists in the treatment of these reactions is unknown.)

Promethazine hydrochloride is contraindicated for use in pediatric patients less than two years of age.

Promethazine is contraindicated in comatose states, and in individuals known to be hypersensitive or to have had an idiosyncratic reaction to promethazine or to other phenothiazines.

PROMETHAZINE HYDROCHLORIDE SHOULD NOT BE USED IN PEDIATRIC PATIENTS LESS THAN 2 YEARS OF AGE BECAUSE OF THE POTENTIAL FOR FATAL RESPIRATORY DEPRESSION.

CAUTION SHOULD BE EXERCISED WHEN ADMINISTERING PROMETHAZINE HYDROCHLORIDE TO PEDIATRIC PATIENTS 2 YEARS OF AGE AND OLDER.

IT IS RECOMMENDED THAT THE LOWEST EFFECTIVE DOSE OF PROMETHAZINE HYDROCHLORIDE BE USED IN PEDIATRIC PATIENTS 2 YEARS OF AGE AND OLDER AND CONCOMITANT ADMINISTRATION OF OTHER DRUGS WITH RESPIRATORY DEPRESSANT EFFECTS BE AVOIDED.

Meperidine should be used with great caution and in reduced dosage in patients who are concurrently receiving other narcotic analgesics, general anesthetics, phenothiazines, other tranquilizers, sedative-hypnotics, tricyclic antidepressants, and other CNS depressants (including alcohol). Respiratory depression, hypotension, and profound sedation or coma may result.

The respiratory-depressant effects of meperidine and its capacity to elevate cerebrospinal-fluid pressure may be markedly exaggerated in the presence of head injury, other intracranial lesions, or preexisting increase in intracranial pressure. Furthermore, narcotics produce adverse reactions which may obscure the clinical course of patients with head injuries. In such patients, meperidine must be used with extreme caution and only if its use is deemed essential.

Asthma and Other Respiratory Conditions

The administration of meperidine may result in severe hypotension in an individual whose ability to maintain his blood pressure has already been compromised by a depleted blood volume or concurrent administration of drugs such as the phenothiazines or certain anesthetics.

Meperidine may impair the mental and/or physical abilities required for the performance of potentially hazardous tasks, such as driving a car or operating machinery. The patient should be cautioned accordingly.

Meperidine, like other narcotics, may produce orthostatic hypotension in ambulatory patients.

Usage in Pregnancy and Lactation

Meperidine should not be used in pregnant women prior to the labor period, unless in the judgment of the physician the potential benefits outweigh the possible hazards, because safe use in pregnancy prior to labor has not been established relative to possible adverse effects on fetal development.

When used as an obstetrical analgesic, meperidine crosses the placental barrier and can produce respiratory depression in the newborn; resuscitation may be required (see OVERDOSAGE).

Meperidine should be used with caution in patients with atrial flutter and other supraventricular tachycardias because of a possible vagolytic action which may produce a significant increase in the ventricular response rate.

The administration of meperidine or other narcotics may obscure the diagnosis or clinical course in patients with acute abdominal conditions.

Meperidine should be given with caution, and the initial dose should be reduced in certain patients, such as the elderly or debilitated, and those with severe impairment of hepatic or renal function, hypothyroidism, Addison's disease, sickle cell anemia, pheochromocytoma, acute alcoholism, CNS depression or coma; delirium tremens, kyphoscoliosis associated with respiratory depression; myxedema or hypothyroidism, renal function and prostatic hypertrophy or urethral stricture.

Ambulatory patients should be cautioned against driving automobiles or operating dangerous machinery until it is known that they do not become drowsy or dizzy from promethazine hydrochloride therapy.

Antiemetics such as promethazine may mask the symptoms of an unrecognized disease and thereby interfere with diagnosis. Promethazine may cause marked drowsiness or impair the mental and/or physical abilities required for the performance of potentially hazardous tasks, such as driving a vehicle or operating machinery. The use of alcohol or other central nervous system depressants such as sedatives/hypnotics (including barbiturates), narcotics, narcotic analgesics, general anesthetics, tricyclic antidepressants, and tranquilizers, may enhance impairment. Patients should be advised to report any involuntary muscle movements.

Avoid prolonged exposure to the sun.

Meperidine should not be used in pregnant women prior to the labor period, unless in the judgment of the physician the potential benefits outweigh the possible risks, because safe use in pregnancy prior to labor has not been established relative to possible adverse effects on fetal development.

Promethazine is classified as Pregnancy Category C. Teratogenic effects have not been demonstrated in rat-feeding studies at doses of 6.25 and 12.5 mg/kg of promethazine hydrochloride. These doses are from approximately 2.1 to 4.2 times the maximum recommended total daily dose of promethazine for a 50 kg subject, depending upon the indication for which the drug is prescribed. Daily doses of 25 mg/kg intraperitoneally have been found to produce fetal mortality in rats.

Specific studies to test the action of the drug on parturition, lactation, and development of the animal neonate were not done, but a general preliminary study in rats indicated no effect on these parameters. Although antihistamines have been found to produce fetal mortality in rodents, the pharmacological effects of histamine in the rodent do not parallel those in man. There are no adequate and well controlled studies of promethazine in pregnant women. Promethazine hydrochloride tablets should be used during pregnancy only if the potential benefit justifies the potential risk to the fetus.

Promethazine administered to a pregnant woman within 2 weeks of delivery may inhibit platelet aggregation in the newborn.

The most frequently observed adverse reactions include light-headedness, dizziness, sedation, nausea, vomiting, and sweating. These effects seem to be more prominent in ambulatory patients and in those who are not experiencing severe pain. In such individuals, lower doses are advisable. Some adverse reactions in ambulatory patients may be alleviated if the patient lies down.

Other adverse reactions include

Paradoxical Reactions: Hyperexcitability and abnormal movements have been reported in patients following a single administration of promethazine hydrochloride. Consideration should be given to the discontinuation of promethazine hydrochloride and to the use of other drugs if these reactions occur. Respiratory depression, nightmares, delirium, and agitated behavior have also been reported in some of these patients. Minor increases in blood pressure and occasional mild hypotension have been detected.

Meperidine can produce drug dependence of the morphine type and therefore has the potential for being abused. Psychic dependence, physical dependence, and tolerance may develop upon repeated administration of meperidine, and it should be prescribed and administered with the same degree of caution appropriate to the use of morphine. Like other narcotics, meperidine is subject to the provisions of the Federal narcotic laws for Schedule II drugs.

Primary attention should be given to the reestablishment of adequate respiratory exchange through provision of a patient airway and institution of assisted or controlled ventilation. The narcotic antagonist, naloxone hydrochloride, is a specific antidote against respiratory depression that may result from overdosage or unusual sensitivity to narcotics, including meperidine. Therefore, an appropriate dose of naloxone hydrochloride should be administered, preferably by the intravenous route, simultaneously with efforts at respiratory resuscitation.

An antagonist should not be administered in the absence of clinically significant respiratory or cardiovascular depression.

Oxygen, intravenous fluids, vasopressors, and other supportive measures should be employed as indicated.

Attempted suicides with promethazine have resulted in deep sedation, coma, rarely convulsions and cardiorespiratory symptoms compatible with the depth of sedation present. Extrapyramidal reactions may be treated with anticholinergic antiparkinson agents, diphenhydramine, or barbiturates.

If severe hypotension occurs, levarterenol or phenylephrine may be indicated. Epinephrine is probably best avoided, since it has been suggested that promethazine overdosage could produce a partial alpha-adrenergic blockade.

A paradoxical reaction, characterized by hyperexcitability and nightmares, has been reported in children receiving large single doses of promethazine.

The usual dosage is one capsule every four to six hours as needed for the relief of pain.

How is Meperidine and Promethazine Capsules Supplied

DISPENSE in a tight, light-resistant container as defined in the USP. Protect from light.