Melphalan should be administered under the supervision of a qualified physician experienced in the use of cancer chemotherapeutic agents. Severe bone marrow suppression with resulting infection or bleeding may occur. Controlled trials comparing intravenous (IV) to oral Melphalan have shown more myelosuppression with the IV formulation. Hypersensitivity reactions, including anaphylaxis, have occurred in approximately 2% of patients who received the IV formulation. Melphalan is leukemogenic in humans. Melphalan produces chromosomal aberrations in vitro and in vivo and, therefore, should be considered potentially mutagenic in humans.

Melphalan is the active L-isomer of the compound and was first synthesized in 1953 by Bergel and Stock; the D-isomer, known as medphalan, is less active against certain animal tumors, and the dose needed to produce effects on chromosomes is larger than that required with the L-isomer. The racemic (DL-) form is known as merphalan or sarcolysin.

Melphalan is practically insoluble in water and has a pKa1 of ~2.5.

Melphalan is an alkylating agent of the bischloroethylamine type. As a result, its cytotoxicity appears to be related to the extent of its interstrand cross-linking with DNA, probably by binding at the N7 position of guanine. Like other bifunctional alkylating agents, it is active against both resting and rapidly dividing tumor cells.

Pharmacokinetics: Following injection, drug plasma concentrations declined rapidly in a biexponential manner with distribution phase and terminal elimination phase half-lives of approximately 10 and 75 minutes, respectively. Estimates of average total body clearance varied among studies, but typical values of approximately 7 to 9 mL/min/kg (250 to 325 mL/min/m2) were observed. One study has reported that on repeat dosing of 0.5 mg/kg every 6 weeks, the clearance of Melphalan decreased from 8.1 mL/min/kg after the first course, to 5.5 mL/min/kg after the third course, but did not decrease appreciably after the third course. Mean (±SD) peak Melphalan plasma concentrations in myeloma patients given IV Melphalan at doses of 10 or 20 mg/m2 were 1.2 ± 0.4 and 2.8 ± 1.9 mcg/mL, respectively.

Melphalan is eliminated from plasma primarily by chemical hydrolysis to monohydroxyMelphalan and dihydroxyMelphalan. Aside from these hydrolysis products, no other Melphalan metabolites have been observed in humans. Although the contribution of renal elimination to Melphalan clearance appears to be low, one study noted an increase in the occurrence of severe leukopenia in patients with elevated BUN after 10 weeks of therapy.

Clinical Trial: A randomized trial compared prednisone plus IV Melphalan to prednisone plus oral Melphalan in the treatment of myeloma. As discussed below, overall response rates at week 22 were comparable; however, because of changes in trial design, conclusions as to the relative activity of the 2 formulations after week 22 are impossible to make.

Both arms received oral prednisone starting at 0.8 mg/kg/day with doses tapered over 6 weeks. Melphalan doses in each arm were:

Doses of Melphalan were adjusted according to the following criteria:

One hundred seven patients were randomized to the oral Melphalan arm and 203 patients to the IV Melphalan arm. More patients had a poor-risk classification (58% versus 44%) and high tumor load (51% versus 34%) on the oral compared to the IV arm (P<0.04). Response rates at week 22 are shown in the following table:


Because of changes in protocol design after week 22, other efficacy parameters such as response duration and survival cannot be compared.

An association was noted between poor renal function and myelosuppression; consequently, an amendment to the protocol required a 50% reduction in IV Melphalan dose if the BUN was ≥30 mg/dL. The rate of severe leukopenia in the IV arm in the patients with BUN over 30 mg/dL decreased from 50% (8/16) before protocol amendment to 11%(3/28) (P = 0.01) after the amendment.

Melphalan Hydrochloride for Injection is indicated for the palliative treatment of patients with multiple myeloma for whom oral therapy is not appropriate.

Melphalan Hydrochloride for Injection may cause local tissue damage should extravasation occur, and consequently it should not be administered by direct injection into a peripheral vein. It is recommended that Melphalan Hydrochloride for Injection be administered by injecting slowly into a fast- running IV infusion via an injection port, or via a central venous line (see DOSAGE AND ADMINISTRATION: Administration Precautions).

Melphalan should be administered in carefully adjusted dosage by or under the supervision of experienced physicians who are familiar with the drug's actions and the possible complications of its use.

As with other nitrogen mustard drugs, excessive dosage will produce marked bone marrow suppression. Bone marrow suppression is the most significant toxicity associated with Melphalan Hydrochloride for Injection in most patients. Therefore, the following tests should be performed at the start of therapy and prior to each subsequent dose of Melphalan Hydrochloride for Injection: platelet count, hemoglobin, white blood cell count, and differential. Thrombocytopenia and/or leukopenia are indications to withhold further therapy until the blood counts have sufficiently recovered. Frequent blood counts are essential to determine optimal dosage and to avoid toxicity. Dose adjustment on the basis of blood counts at the nadir and day of treatment should be considered.

Adequate and well-controlled carcinogenicity studies have not been conducted in animals. However, intraperitoneal (IP) administration of Melphalan in rats (5.4 to 10.8 mg/m2) and in mice (2.25 to 4.5 mg/m2) 3 times per week for 6 months followed by 12 months post-dose observation produced peritoneal sarcoma and lung tumors, respectively.

Mutagenesis: Melphalan has been shown to cause chromatid or chromosome damage in humans. Intramuscular administration of Melphalan at 6 and 60 mg/m2 produced structural aberrations of the chromatid and chromosomes in bone marrow cells of Wistar rats.

Impairment of Fertility: Melphalan causes suppression of ovarian function in premenopausal women, resulting in amenorrhea in a significant number of patients. Reversible and irreversible testicular suppression have also been reported.

Pregnancy: Pregnancy Category D. Melphalan may cause fetal harm when administered to a pregnant woman. While adequate animal studies have not been conducted with IV Melphalan, oral (6 to 18 mg/m2/day for 10 days) and IP (18 mg/m2) administration in rats was embryolethal and teratogenic. Malformations resulting from Melphalan included alterations of the brain (underdevelopment, deformation, meningocele, and encephalocele) and eye (anophthalmia and microphthalmos), reduction of the mandible and tail, as well as hepatocele (exomphaly). There are no adequate and well-controlled studies in pregnant women. If this drug is used during pregnancy, or if the patient becomes pregnant while taking this drug, the patient should be apprised of the potential hazard to the fetus. Women of childbearing potential should be advised to avoid becoming pregnant.

In all instances where the use of Melphalan Hydrochloride for Injection is considered for chemotherapy, the physician must evaluate the need and usefulness of the drug against the risk of adverse events. Melphalan should be used with extreme caution in patients whose bone marrow reserve may have been compromised by prior irradiation or chemotherapy or whose marrow function is recovering from previous cytotoxic therapy.

Dose reduction should be considered in patients with renal insufficiency receiving IV Melphalan. In one trial, increased bone marrow suppression was observed in patients with BUN levels ≥30 mg/dL. A 50% reduction in the IV Melphalan dose decreased the incidence of severe bone marrow suppression in the latter portion of this study.

Administration of live vaccines to immunocompromised patients should be avoided.

Patients should be informed that the major acute toxicities of Melphalan are related to bone marrow suppression, hypersensitivity reactions, gastrointestinal toxicity, and pulmonary toxicity. The major long-term toxicities are related to infertility and secondary malignancies. Patients should never be allowed to take the drug without close medical supervision and should be advised to consult their physicians if they experience skin rash, signs or symptoms of vasculitis, bleeding, fever, persistent cough, nausea, vomiting, amenorrhea, weight loss, or unusual lumps/masses. Women of childbearing potential should be advised to avoid becoming pregnant.

Periodic complete blood counts with differentials should be performed during the course of treatment with Melphalan. At least 1 determination should be obtained prior to each dose. Patients should be observed closely for consequences of bone marrow suppression, which include severe infections, bleeding, and symptomatic anemia (see WARNINGS).

The development of severe renal failure has been reported in patients treated with a single dose of IV Melphalan followed by standard oral doses of cyclosporine. Cisplatin may affect Melphalan kinetics by inducing renal dysfunction and subsequently altering Melphalan clearance. IV Melphalan may also reduce the threshold for BCNU lung toxicity.

When nalidixic acid and IV Melphalan are given simultaneously, the incidence of severe hemorrhagic necrotic enterocolitis has been reported to increase in pediatric patients.

It is not known whether this drug is excreted in human milk. IV Melphalan should not be given to nursing mothers.

The safety and effectiveness in pediatric patients have not been established.

Clinical studies of Melphalan Hydrochloride for Injection did not include sufficient numbers of subjects aged 65 and over to determine whether they respond differently from younger subjects. Other reported clinical experience has not identified differences in responses between the elderly and younger patients. In general, dose selection for an elderly patient should be cautious, usually starting at the low end of the dosing range, reflecting the greater frequency of decreased hepatic, renal, or cardiac function, and of concomitant disease or other drug therapy.

The following information on adverse reactions is based on data from both oral and IV administration of Melphalan as a single agent, using several different dose schedules for treatment of a wide variety of malignancies.

Gastrointestinal: Gastrointestinal disturbances such as nausea and vomiting, diarrhea, and oral ulceration occur infrequently. Hepatic disorders ranging from abnormal liver function tests to clinical manifestations such as hepatitis and jaundice have been reported. Hepatic veno-occlusive disease has been reported.

Significant hyponatremia caused by an associated inappropriate secretion of ADH syndrome has been observed. Nephrotoxicity and adult respiratory distress syndrome have been reported rarely. The principal toxic effect is bone marrow suppression. Hematologic parameters should be closely followed for 3 to 6 weeks. An uncontrolled study suggests that administration of autologous bone marrow or hematopoietic growth factors (i.e., sargramostim, filgrastim) may shorten the period of pancytopenia. General supportive measures together with appropriate blood transfusions and antibiotics should be instituted as deemed necessary by the physician. This drug is not removed from plasma to any significant degree by hemodialysis or hemoperfusion. A pediatric patient survived a 254-mg/ m2 overdose treated with standard supportive care.

The usual IV dose is 16 mg/ m2. Dosage reduction of up to 50% should be considered in patients with renal insufficiency (BUN ≥30 mg/dL) (see PRECAUTIONS: General). The drug is administered as a single infusion over 15 to 20 minutes. Melphalan is administered at 2-week intervals for 4 doses, then, after adequate recovery from toxicity, at 4-week intervals. Available evidence suggests about one third to one half of the patients with multiple myeloma show a favorable response to the drug. Experience with oral Melphalan suggests that repeated courses should be given since improvement may continue slowly over many months, and the maximum benefit may be missed if treatment is abandoned prematurely. Dose adjustment on the basis of blood cell counts at the nadir and day of treatment should be considered.

Procedures for proper handling and disposal of anticancer drugs should be considered. Several guidelines on this subject have been published.1-4 There is no general agreement that all of the procedures recommended in the guidelines are necessary or appropriate.

Parenteral drug products should be visually inspected for particulate matter and discoloration prior to administration whenever solution and container permit. If either occurs, do not use this product.

Care should be taken to avoid possible extravasation of Melphalan and in cases of poor peripheral venous access, consideration should be given to use of a central venous line (see WARNINGS).

A precipitate forms if the reconstituted solution is stored at 5°C. DO NOT REFRIGERATE THE RECONSTITUTED PRODUCT.

How is Melphalan Supplied 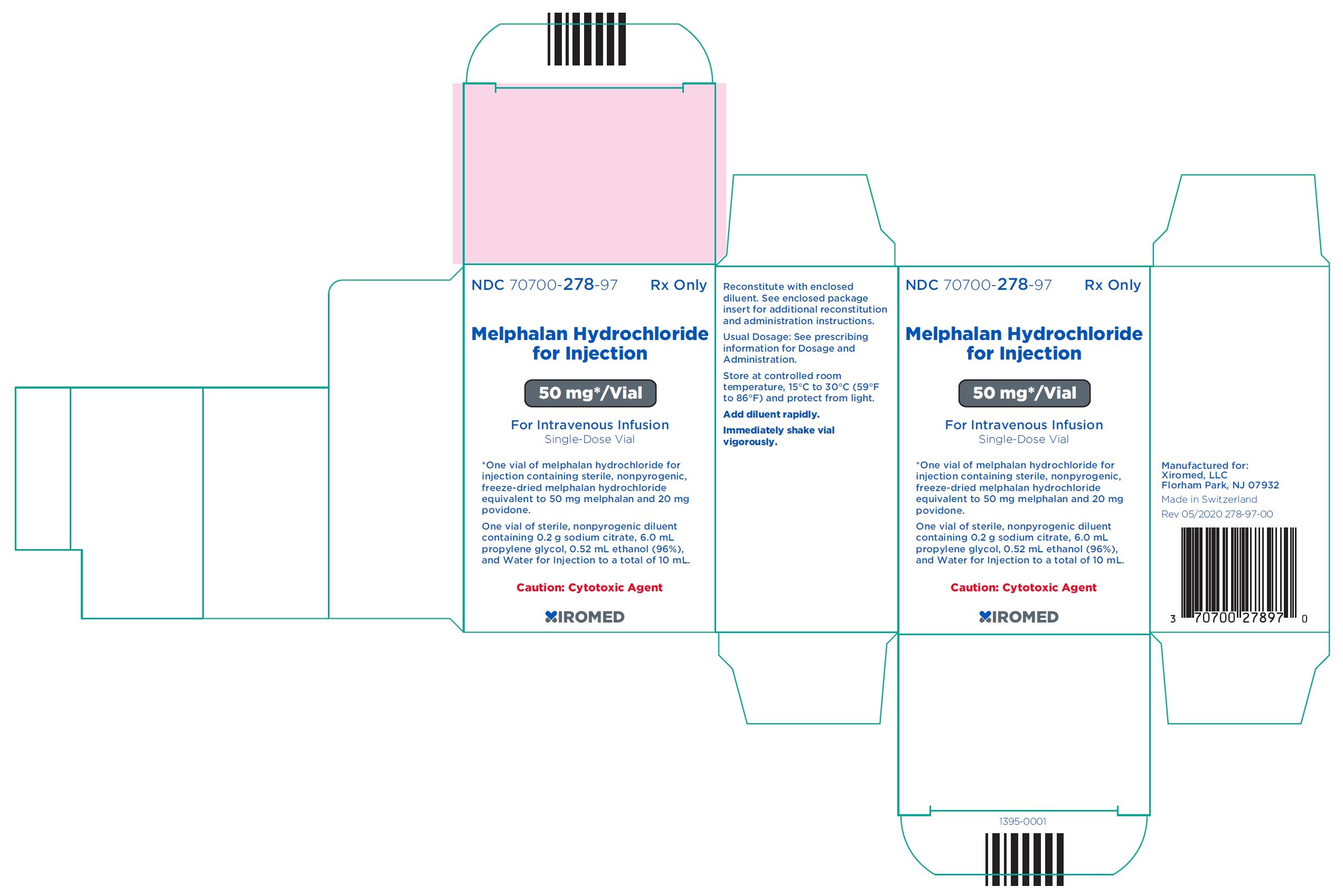 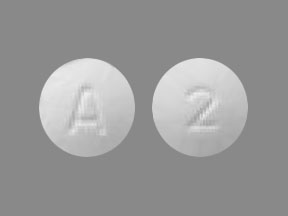